Let me make this clear from the outset: fetal tissue used for research is taken from abortions that women elect to undergo.  The tissue has shown enormous promise for medical research, including its past use in developing the polio vaccine, as well as making useful advances in AIDS research, birth defects, Down Syndrome, spinal cord injuries, organ transplants, diabetes, and many other conditions. The reason fetal tissue is used rather than, say, adult tissue from cadavers is because fetal tissue retains an ability to transform itself into various types of tissue, and also grows faster than adult tissue. Further, because fetal tissue doesn’t elicit nearly as strong an immune response as does adult tissue (you can imagine why this is the case; think pregnancy), you can create strains of mice that have a weakened immune system and also carry fetal tissue in them, facilitating experimental work. (These are known as “humanized mice” and reader Simon has an explanation below the fold about how they’re made and what they’re good for.)

Over the years, conservatives, especially religious ones, have objected to the use of fetal tissue in research because it’s seen as parts of dead babies (i.e., humans with “souls”), with some hinting darkly that allowing the work could actually promote abortions. But if that tissue can save future adult lives, and comes from dead fetuses whose tissue would be otherwise destroyed, what kind of inhumane calculus would forbid its use? Further, I can’t imagine that a single woman who wanted to have her baby would volunteer to have an abortion instead so that the fetal tissue could be used in research. That idea is insane. There is no rational objection to the use of fetal tissue in research save that its use undergoes the same kind of ethics vetting as other use of human tissue, which it already does.

But now, after more than twenty years when government-funded agencies like the National Institutes of Health (NIH) permitted such research, the Trump administration is putting clamps on it, as reported by the article below in the Washington Post (click screenshot to read it). They add that “officials say the president made the final decision.”

The impediments to research come in the form of requiring all government-funded work on fetal tissue to be approved by a new ethics committee beyond the vetting normally used in such research. The kicker is that the committee hasn’t yet been constituted, and may not be for a long time to come. The result is that nobody is writing government grants to do work on fetal tissue. Further, every grant approved by this perhaps-to-be-constituted-someday committee must also be approved by Health and Human Services Secretary Alex Azar, who has the final say. Finally, the new rules require that any research using fetal tissue document that the tissue come with an assurance from the provider that the donating woman provided informed consent, which brings up questions of privacy, both of the women and of the clinics and tissue banks who provide the material.

The ethics panel, if it actually materializes, will meet only once a year, far less often than the number of NIH deadlines.

Current NIH grants using the tissue can continue till they expire, but no future grants are being written, and research on fetal tissue within the NIH has already been halted, as have training grants that use the tissue. Private companies can continue the work, but the big majority of fetal-tissue work is funded by the government, and even for private companies the cost of using “humanized mice” without government support will be prohibitively expensive.

Some researchers are investigating replacement material, like using “deprogrammed” adult tissue, but nothing so far has proven as useful in research as the fetal tissue.

For a vigorous argument by two researchers on the value of using fetal tissue, and what progress has come from it, click on the screenshot below to read an article in Stem Cell Reports: 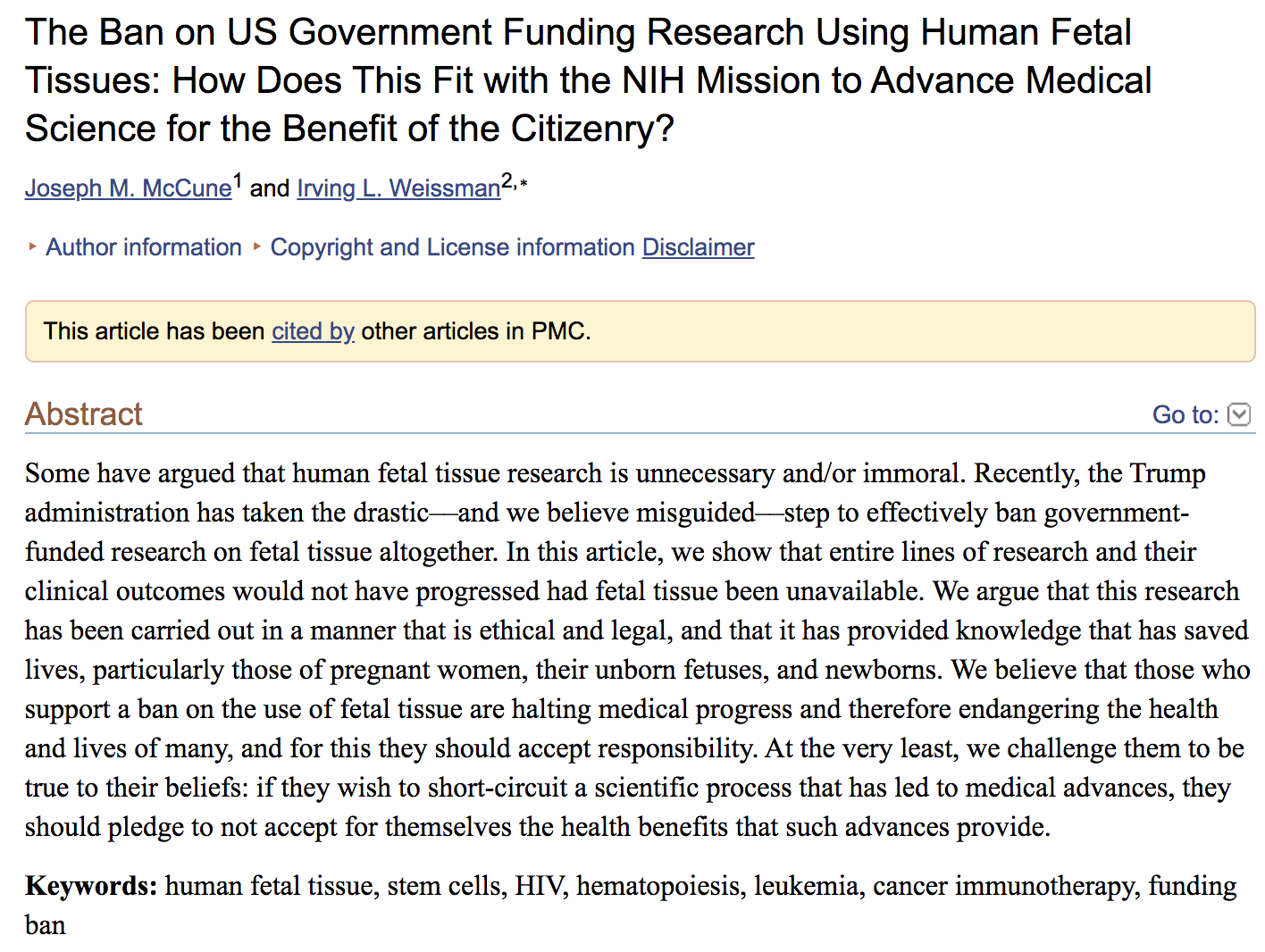 Again, there is no rationale—beyond the religious view that somehow fetal tissue is sacred—to support this new decision. Without the research, the fetuses would be disposed of normally, and that doesn’t mean burial. So, under pressure from the religious Right, Trump and his administration have slowed down medical research, possibly sacrificing lives that could be saved, and for no good reason. Even Francis Collins, head of the NIH and an evangelical Christian, favors the use of fetal tissue in research.

Once again we see a conflict between faith and fact, with faith impeding not just the discovery of important facts, but ones that could save lives. What kind of tradeoff are these religious crazies making?

Click “read more” if you want to learn how “humanized mice” are made.

Reader Simon Hayward explained to me how humanized mice are made, and allowed me to share his explanation with the readers (indented). Note: it’s technical.

Humanizing mice is a thing. Lots of links online to this.
There are a number of issues with [non-humanized] mice as models. One is that their immune system is not identical to humans, there are differences in details and that can be important. Another issue is that, of course, it’s not possible to do xenograft studies in immunointact mice because they reject grafts. The traditional approaches to this (nude, SCID and Rag hosts) have various issues of their own nudes are athymic (and also bald) so have no T cells but do have myeloid cells and some B cell activity, SCIDs and Rags are variations on VJD recombination incompetent mice, so they essentially have no functional lymphoid lineages and variable myeloid cells. The interactions between the lymphoid and myeloid lineages – for example the role of T cells in programming macrophages for M1/M2 lineages is also lost. No real need to get buried in the details.
One was around this is to humanize the immune system in mice. So you can take a mouse, irradiate it and then add back an immune system – in much the same way as some human leukemia patients can receive new bone marrow from donors. However, this is a big caveat, in the patients the marrow has to be matched to the recipient cell surface antigen profile (HLA plus a bunch of others) as otherwise the immune cells will reject the host. This is clearly not an option if the host is a mouse (addressing your cadaver, or indeed left over done tissue, question). If you go earlier into development the immune system is trained during development to recognize self and non-self by presentation of antigens and elimination of reactive clones in the thymus. (This is all well outside of my area of expertise so don’t go to the bank on this, but this essence is about right). So the best option is to put in an untrained immune system and let the mouse educate it. All of the lymphocytic lineages are derived from the fetal liver (they migrate to and take up residence in the bone marrow later on in development). So essentially you can take fetal liver, mash it up a bit inject it into an irradiated mouse and it will reconstitute a human immune system in the mouse. This lets you study human immune responses in cancer (for example) and examine the human immune system in ways that are not practical in living people (those darned lawyers and ethicists!) For xenografts you still have to HLA match the graft and the mouse recipient immune system, but that’s doable if you have enough money.