Note: The classification of “dinosaur” above isn’t totally accurate, for the creature discussed below is an archosaur, a member of the group that gave rise to dinosaurs, pterosaurs, and crocodilians. But we might as well call it a dinosaur, as few people know what an “archosaur” is.

The ancestors of the dinosaurs could not have been big, for they evolved from amphibians, and amphibians, for a number of reasons, are limited in size.  But this new paper in PNAS shows that some of the earliest ancestors of dinos were very small—not just small, but tiny. The new species described below, which falls into a group that later diverged into pterosaurs (flying reptiles) and the dinosaurs, was only 10 cm tall, the distance between my index fingers in the photo below: 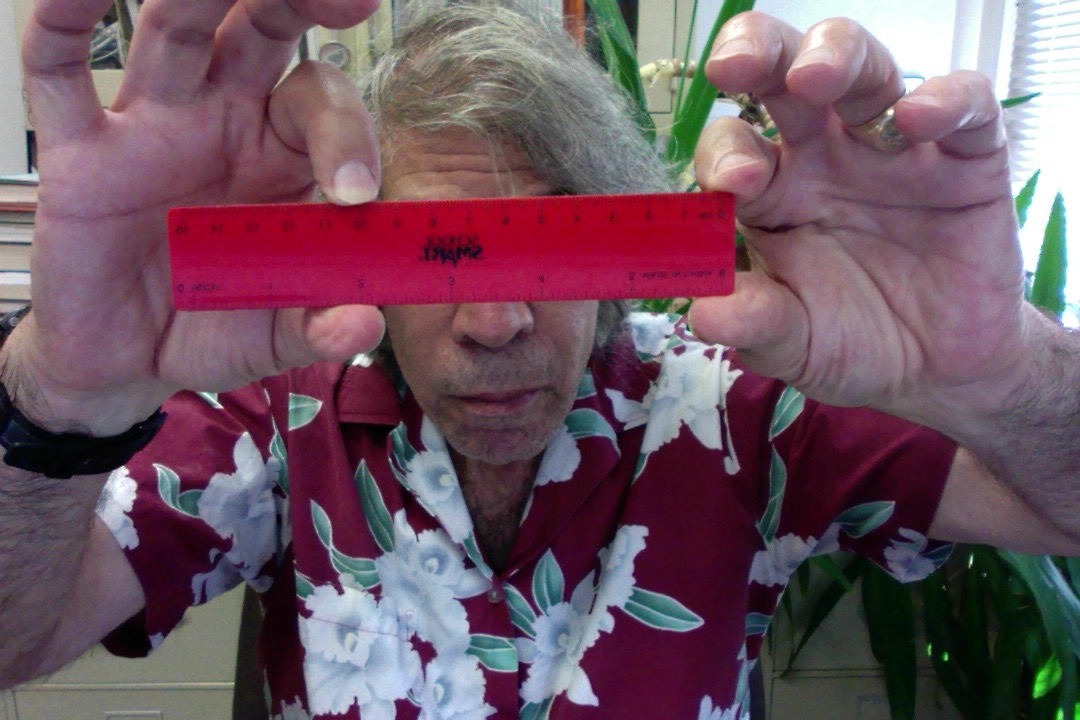 Click on screenshot to read the paper; the pdf is here, and reference at bottom of post.

The partial skeleton of this tiny creature, whose dentition suggests it ate insects, was discovered in 1998 in Southwestern Madagascar. Although the age of the specimen is a bit uncertain, a good estimate is about 237 million years.

Here are some drawings of the parts of the skeleton they recovered, including leg bones, a forearm bone, and the jaws (interpreted as coming from single individual), and a figure showing where they fit into the body (figure F). The size, estimated from the bones, which clearly put the species in the ancestral group Ornithodira (also known as Avemetatarsalia), show that the creature was only about 10 cm tall. It must have been really cute: a pet-sized reptile. Note that the length of the scale bar on the left, showing the femurs, is one centimeter (about 4/10 of an inch), while on the right the scale bar for the jaws is only about 40 mm (1.6 inches):

The teeth, as you can see in the drawing above, were simple ones: conical and without serrations. That suggests that the creature lived on insects (I used “bug” in the title as a generic word for insects, though technically, bugs are in the order Hemiptera). The estimated size of 10 cm comes from the size of the preserved femur, which is only about 1.6 inches long. The specimen wasn’t a juvenile, as the authors saw signs of arrested growth in the fossil bones. The bones also indicate strongly that K. kely was bipedal, like T. rex and the theropods.

To place this individual in the phylogeny of dinosaurs and their ancestors, the authors did a computer analysis of 422 characters derived from these bones, and K. kely fell out in group B of the phylogeny below, which includes the dinosaurs and the pterosaurs (the relative size of this tiny species is shown to the right). I’ve put a box around K. kely.

B is the base of the Ornithodira, the group that gave rise to all dinosaurs and pterosaurs, and you see that K. kely is an early (“basal”) member of this group 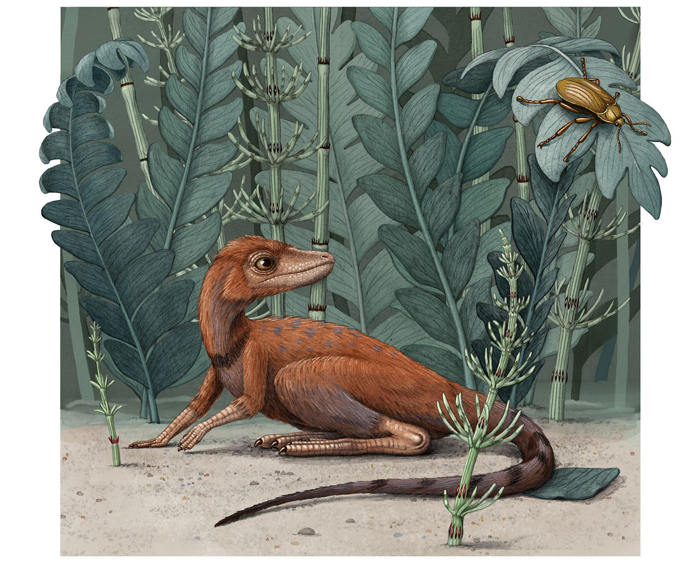 Now the diminutive size of this creature doesn’t mean that the common ancestor of all dinos and peterosaurs was this small. But it does imply that the ancestor of those groups, which falls out in a “reconstruct-the-size” analysis, was smaller than we thought. K. kely itself could have been the result of a “miniaturization event” in which a somewhat larger ancestor produced some tiny descendants. The estimated size of ancestral Ornithodiran  is estimated fo be about 13.3 cm, or about 5.3 inches tall, and the ancestral species of the Dinosauromorphs, which includes dinos and birds but not pterosaurs, is even smaller, about 6.5 cm (2.5 inches)!

What are the implications of this beyond showing that the ancestral dino and ancestral dino/pterosaur were likely a lot smaller than we thought? Well, first of all, we have no idea why these early creatures were so small. My own guess is that since insects had already evolved, there was an “open niche” to specialize in eating them, and if you want to make a living as a terrestrial reptile eating insects, you can’t be the size of a T. rex.

The authors note that the small size of this species (and probably its close relatives) accounts for the absence of ornithodirans in Early and Middle Triassic faunas, for small creatures have tiny, fragile bones that aren’t easily preserved. In fact, our best knowledge of early Ornithodirans previously came from sediments in Argentina whose nature allowed for the preservation of small animals.

Finally, the authors speculate that these small species would have a problem with heat retention, since they were ectothermic (“cold blooded”). Small creatures have a higher surface area/volume ratio than larger ones, which means more heat lost by radiation. Thus, suggest the authors, the filaments covering the bodies of some dinos and pterosaurs—which might have been homologous to feathers that eventually covered the theropods—would have been useful as insulation. This sounds good, but of course there are plenty of extant small insect-eating reptiles, like geckos and anoles, that make a fine living without feathers. But it would still be useful to look at these early, small species to see if there is any evidence for filamentous body cover.

Kammerer, C. F., S. J. Nesbitt, J. J. Flynn, L. Ranivoharimanana, and A. R. Wyss. 2020. A tiny ornithodiran archosaur from the Triassic of Madagascar and the role of miniaturization in dinosaur and pterosaur ancestry. Proceedings of the National Academy of Sciences 117:17932-17936.