Well, here we are back the start of the week:  n = n + 1 on Monday, July 27, 2020. Is anyone dispirited like me, or is everyone ebullient? If so, why? At least we have lots of cat pictures today: all of the Polish cats including Hili, Szaron, Leon, and the tiny new kitten Kulka.

Foodimentary says that it’s National Scotch Day, though I’m not sure Scotch is a food, but make mine a well-aged Springbank. It’s also National Creme Brulée Day (another overrated dessert in the flan family), National Chicken Finger Day (I’ve never had one), and Bagpipe Appreciation Day. In North Korea it’s Day of Victory in the Great Fatherland Liberation War, marking the signing of the Korean Armistice agreement in 1953 (we’re still technically at war with the DPRK), and in the US it’s National Korean War Veterans Armistice Day.

News of the Day: There are renewed calls to rename the Edmund Pettus Bridge in Selma, Alabama, as it’s named after a Confederate general and a Grand Dragon of the Ku Klux Klan. Normally I’d favor the renaming (one suggestion is to rename it the John Lewis Bridge), but the old name is so imbued with history that I think it should stay. The bridge is the site of “Bloody Sunday”—actually three Sundays in 1965 on which civil rights activists tried to march from Selma to Montgomery and were attacked by police. It was the sight of that police brutality that helped propel passage of the Voting Rights Act of 1965. The contrast between the segregationism embodied in the bridge’s name and its role in furthering civil rights suggests that the name should stay not as a memorial to the Confederacy, but to the great struggle for civil rights.

And there was this: John Lewis’s body ferried in a caisson over the bridge where, 55 years ago, police fractured his skull with a billy club.

The name is important here. If it’s renamed, the letters should nevertheless stay.

Senator Josh Hawley of Missouri, a member of the Senate Judiciary Committee, says he will not vote to confirm any new Supreme Court nominees unless they vow to overturn Roe v. Wade. Although there are no Court openings in the offing, there are rumors that Clarence Thomas could retire, and of course there’s always RBG’s health.  But what about not voting on a President’s nominees in an election year, a Republican strategy that killed Obama’s nominee? Mitch McConnell pulls a 180:

Although no vacancy is imminent, White House officials and some top Republicans have privately discussed the possibility that Justice Clarence Thomas, a conservative appointed by George H.W. Bush, could retire.

But McConnell has said he would push through a Trump nominee this year, should an opening occur. The difference from 2016, he maintains, is that now the same political party controls the White House and Senate.

How is that relevant?

The novel To Kill a Mockingbird is finally getting canceled, including in this piece in the Washington Post, which says that the novel is still “reinforcing and normalizing a culture of oppression.” But what are the truths about white people that, according to author Errin Haines, the novel tells? That white folks are all racist, imbued with privilege, perpetrators of systemic racism, and unwilling to lift a finger to help people of color. This is a shameful piece of propaganda by the Post.

Stuff that happened on July 27 include:

It still amazes me that several thousand miles of cable can be strung between continents without breaking it. But it was done. Here’s a painting of the landing of the cable:

According to this biography, which I read recently, van Gogh did not shoot himself, but was shot by a rowdy kid in his village. Read the appendix to see the evidence, which I found pretty convincing.

The riots began when a group of black men entered a segregated area of the 29th Street Beach. Things mushroomed from there. Here are two pictures from Wikipedia with its captions:

Banting, along with John Macleod, won the Nobel Prize for Physiology or Medicine in 1923. Charles Best, who co-discovered the hormone, should also have been honored but wasn’t. Best did give him half of his share of the Prize.

Some of the artifacts have been auctioned off, including this one, which looks to me like a teapot:

Most of us remember that Richard Jewell was falsely accused of the bombing, which killed one person. Later it was found that Eric Rudolph did the deed, along with other bombings, and Rudolph is serving four consecutive life sentences in a Supermax prison.

Eggleston, who owns 300 Leica cameras, was a master at color landscape photography, though the landscapes are urban, like this one:

Here’s a 7.5-minute video of A-Rod’s career highlights. He’s not in the Hall of Fame, perhaps because he used performance-enhancing steroids for a time and was suspended from baseball for a year.

Those who conked on July 27 include:

Here’s Shepard in Terrence Malick’s great film “Days of Heaven” (1978), one of the most beautiful movies ever photographed. This is the scene where locusts take over the farm:

Meanwhile in Dobrzyn, Hili, outside, sees Szaron, inside, napping on her blanket:

Hili: What will it come to?
A: I don’t understand.
Hili: This cultural appropriation. 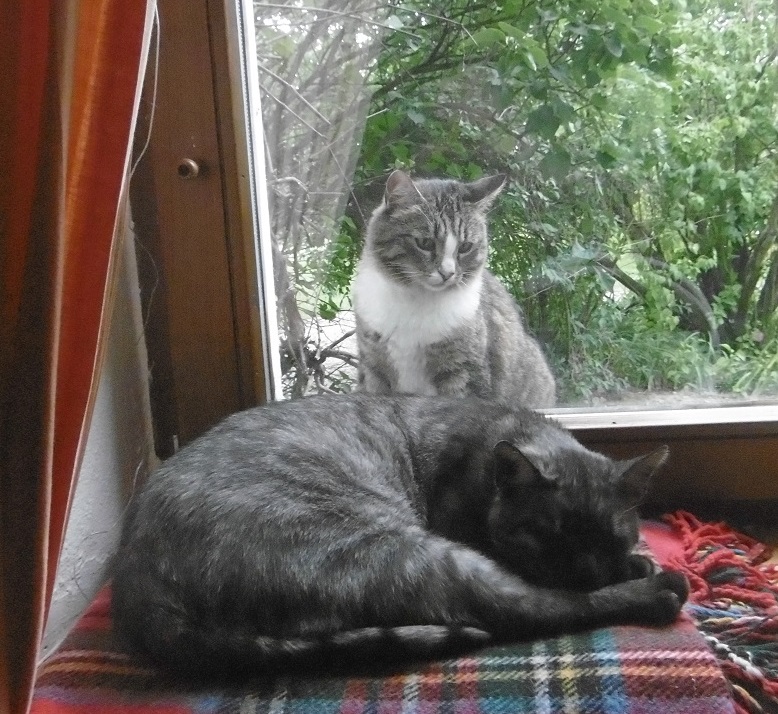 Upstairs, Paulina plays with the new kittten Kulka, who apparently is now a permanent resident:

When I was told that Kulka was a fearless kitten, and climbed the lilac bush up to the second floor of the house, I demanded pictures. Paulina obliged with these four.  Kulka weights only half a kilo (one pound!): 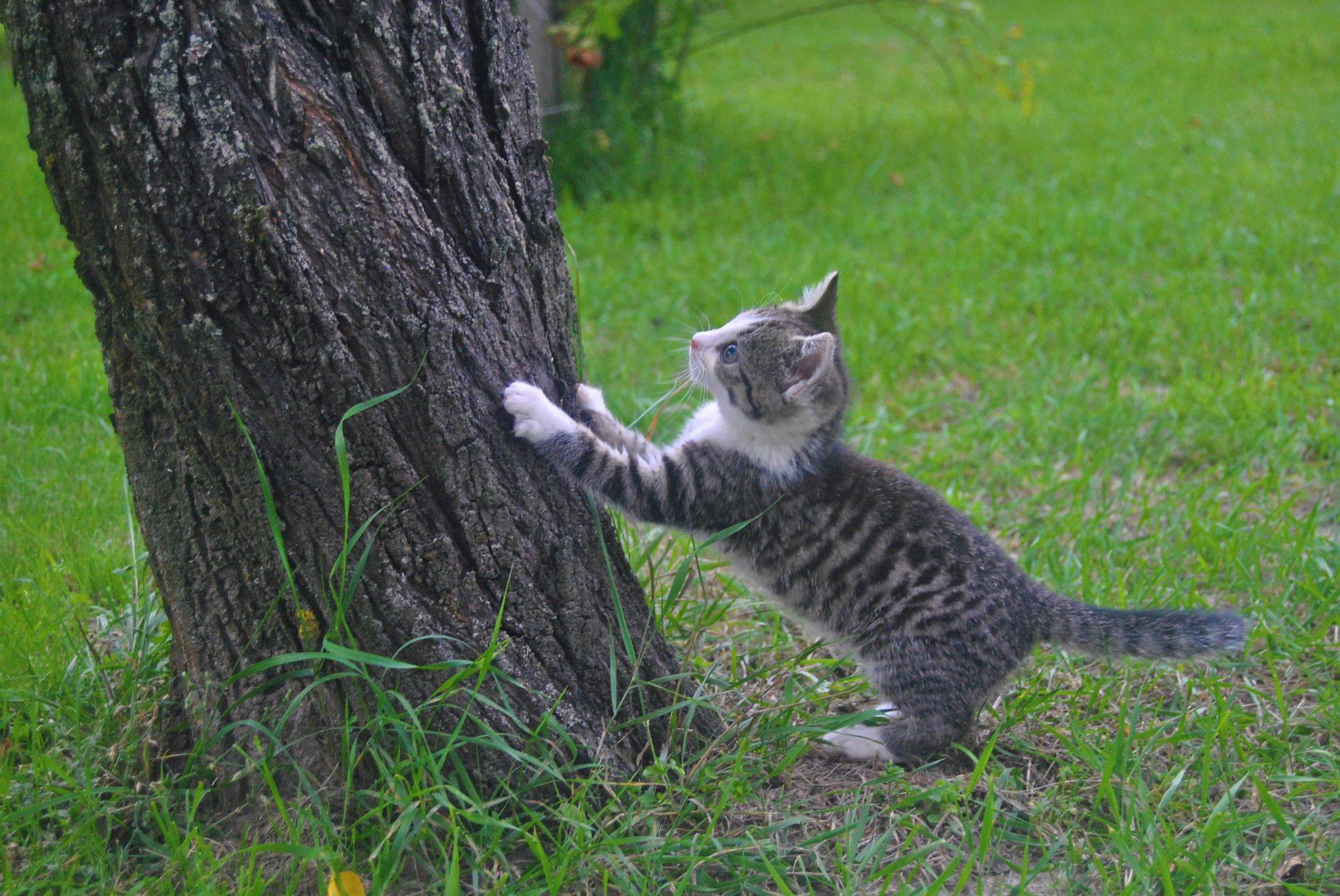 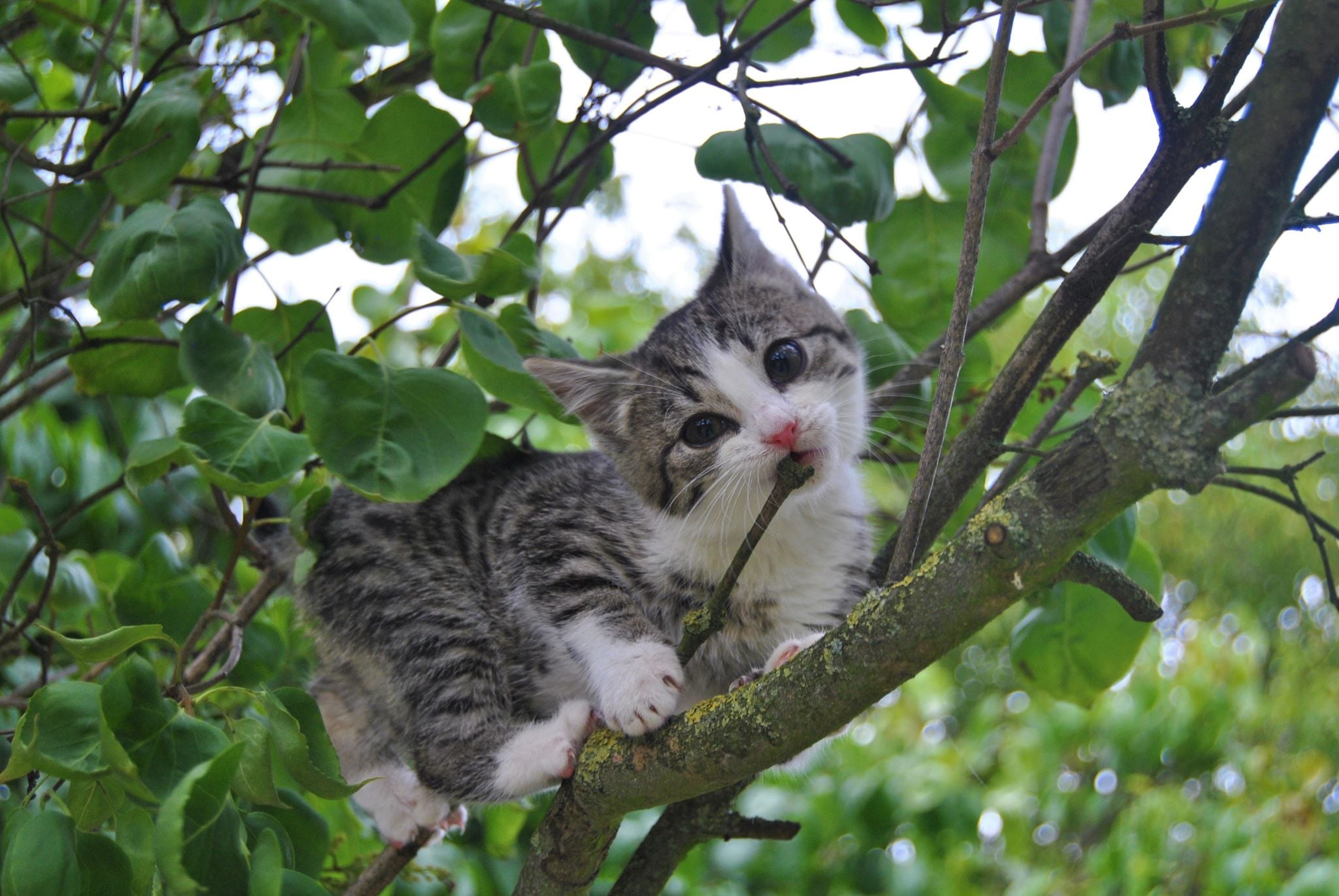 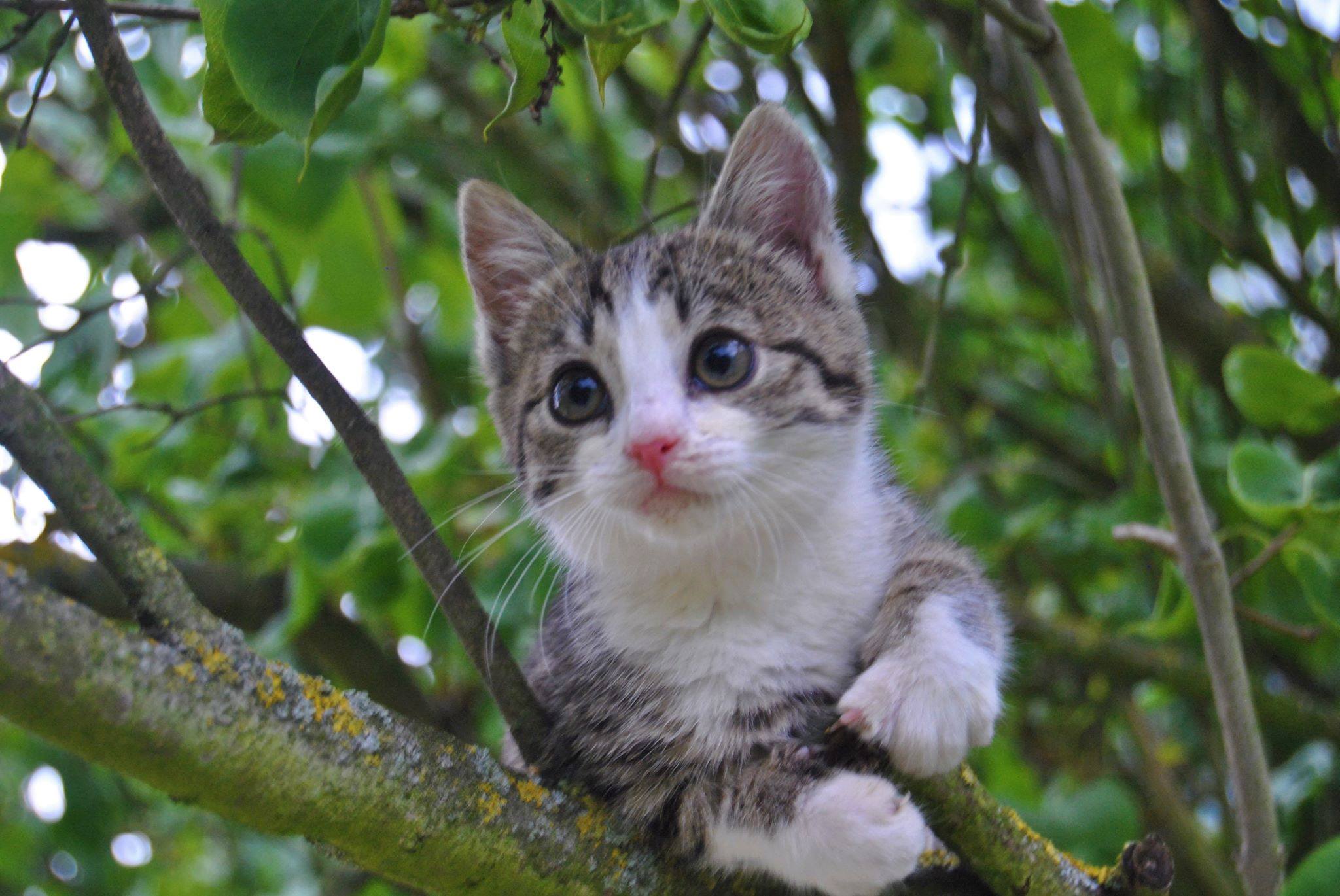 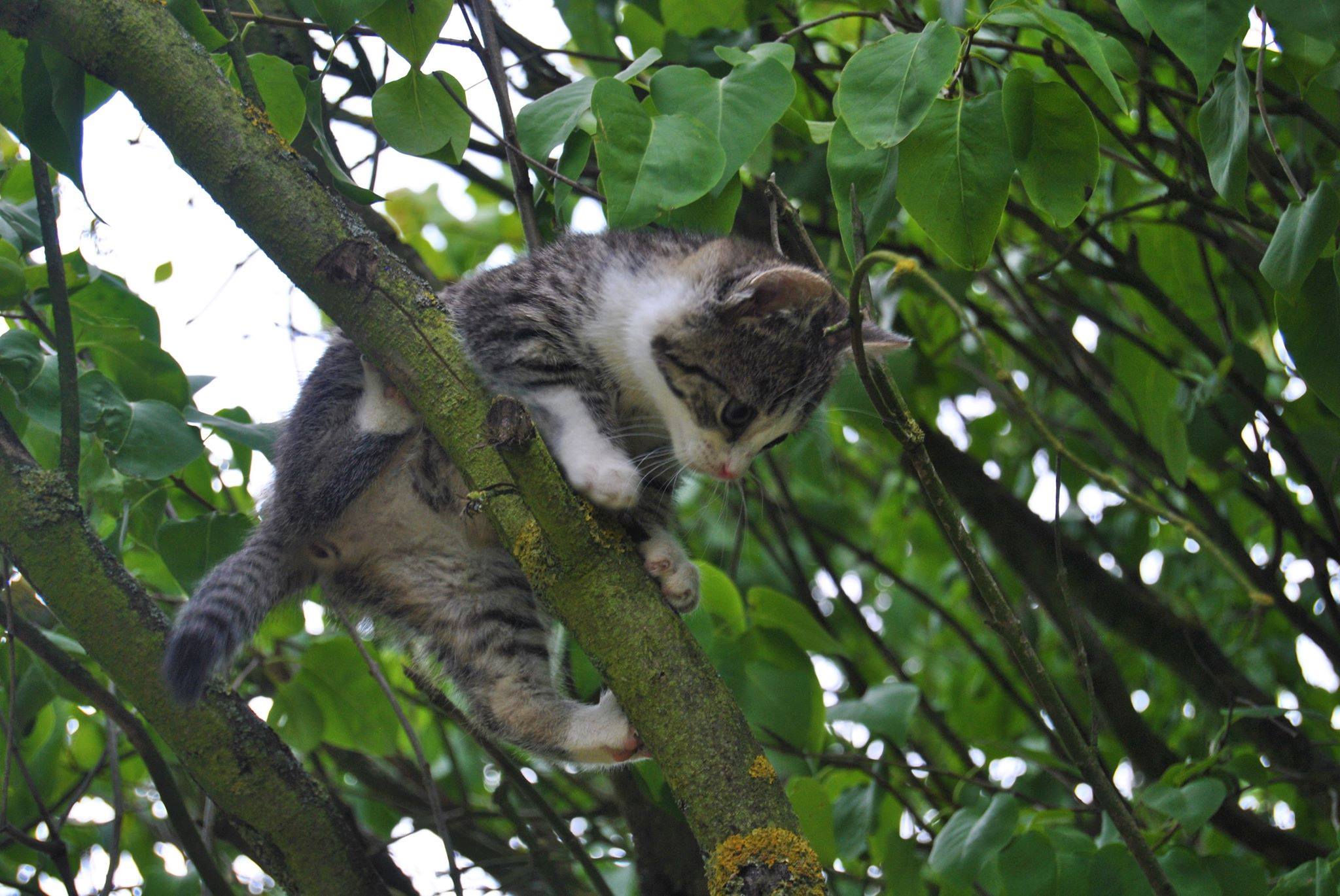 And nearby, Leon bewails the new week:

A groaner from Bruce: 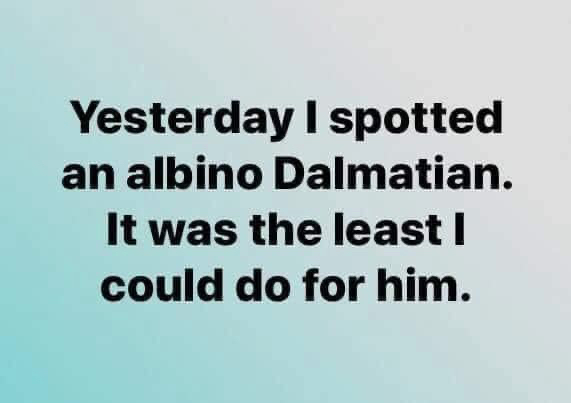 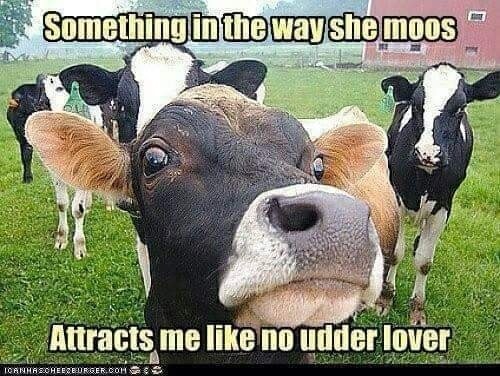 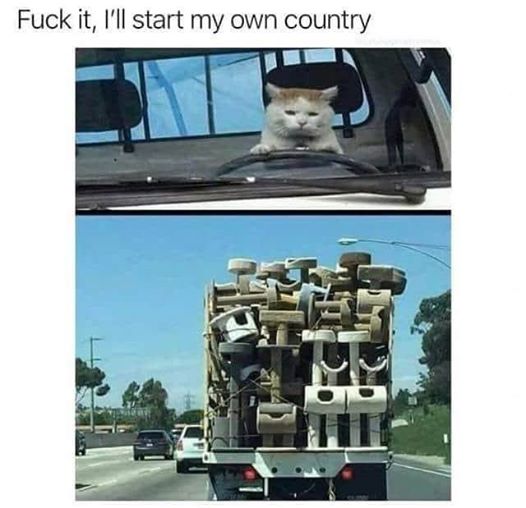 From Simon: the world’s best dad:

. . . and an adorable kitten breakfast. Sound up to hear the good mews:

A tweet from Matthew showing how Gosling, Wilkins, and Franklin took the photos that helped show that DNA was a double helix. Condoms and paper clips are essential.

Here’s (1) the camera that Franklin and Wilkins used to take 100s of images, leading to the values that supported the double helix model. The whole thing was enclosed in a condom and filled with gas. (2) Actual Signer DNA samples used then. (3) Thread of DNA on bent paperclip. pic.twitter.com/fZQDyU5ydc

More examples of cancel culture. And they didn’t even include Rebecca Tuvel:

'Universities used to be known as places where knowledge was respected, freedom of thought was expected, and critical thinking and dissenting views were tolerated… but not anymore.'

Okay, what are these rabbits doing? Mating? Fighting? Or playing?

A monument to Donald Trump in Northern Ireland: