A new study by the Pew organization (click on screenshot below or get full pdf here) surveyed 38,436 people in 34 countries across the globe, asking them questions about how important God or religion is to them and—today’s topic)—do you really need God to be moral.  The methods included both face to face and phone surveys.

The overall results aren’t that surprising: more religious countries and more religious people within countries think that “belief in God is necessary to be moral and have good values”, while richer countries (which are also less religious countries) tend to harbor respondents who don’t think faith is necessary for morality. And the proportion of those who see God as important in this respect is waning in most of Western Europe over time, though growing in Russia, Bulgaria, Japan and Ukraine). 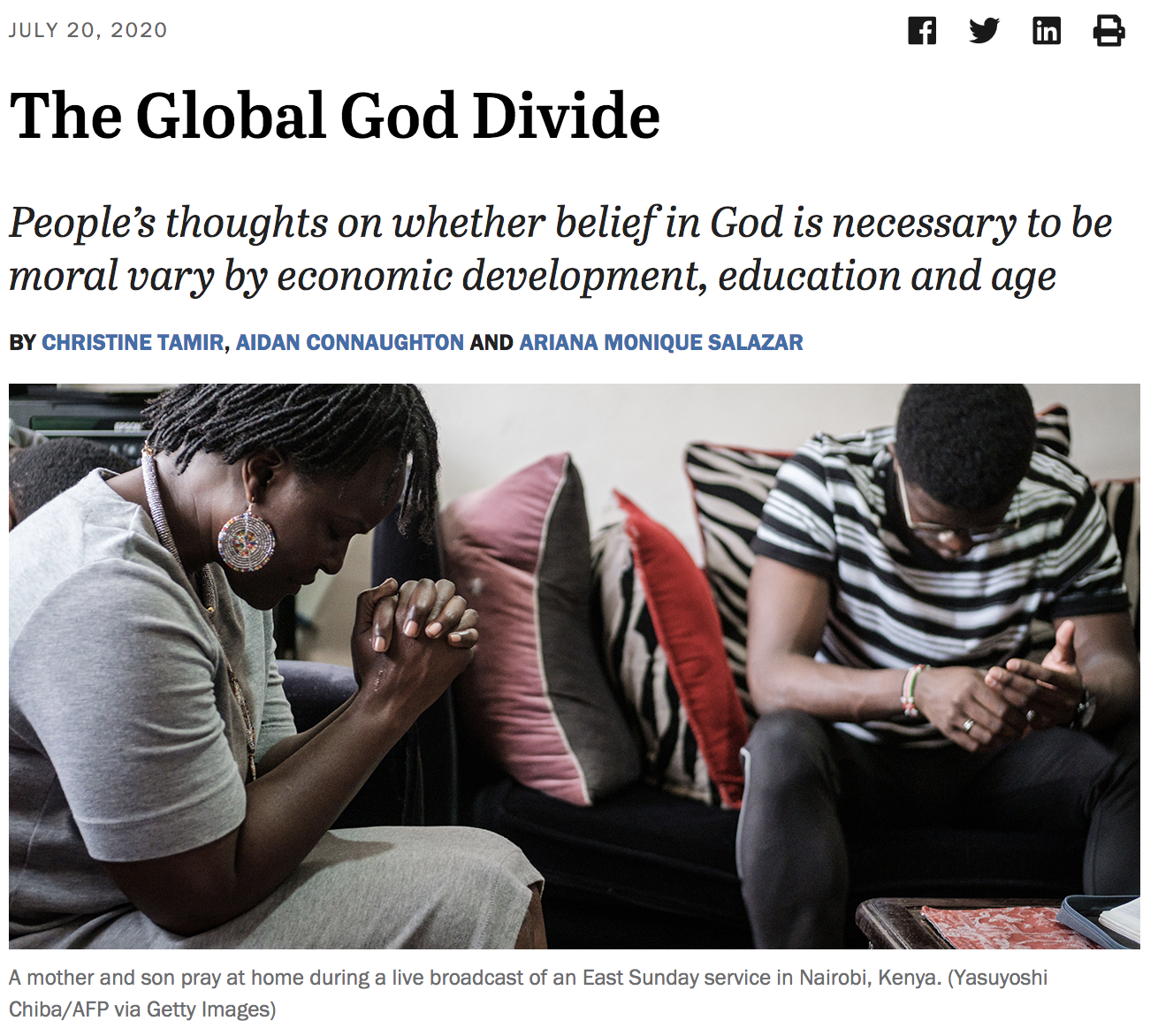 The overall results show a pretty even division across the globe, though religion plays an important role in most people’s lives. But these results aren’t that informative given the observed variation across countries (see below): 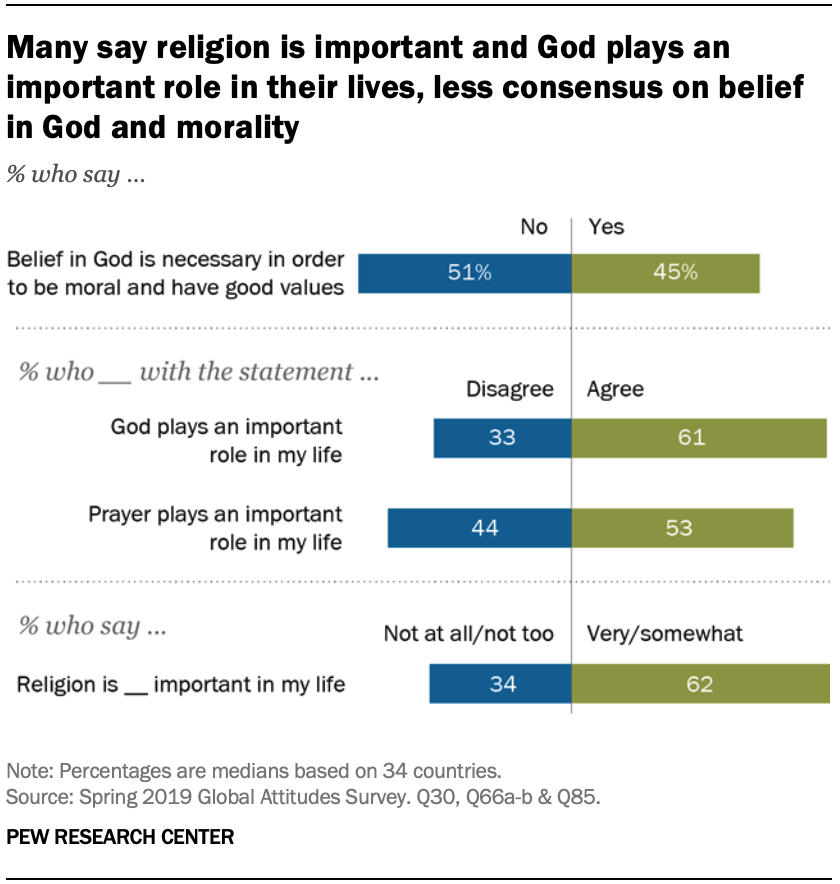 Below is a plot showing the variation across the surveyed countries. Look at the first two lines showing a substantial difference between the U.S. and the more secular Canada.

Overall, I would have thought that even religious people wouldn’t assert that you need God to be moral, mainly because there’s so much evidence that nonbelievers are moral. In fact, the most secular countries in the world—those in Scandinavia—could be construed as being more moral than many of the more religious countries, like Islamic countries of the Middle East. Further, the Euthyphro argument, which shows that our sense of morality must be prior to belief in God (unless you believe in Divine Command theory), disposes of the we-need-God-to-be-moral claim. But of course few people have thought the issue through that far.

Muslim and Catholic (or devout Christian) countries show the strongest belief in God as a necessity for morality. 90% or above ratings are seen in the Philippines, Indonesia, Kenya, and Nigeria.

Three more plots. The first one shows the familiar pattern of richer countries adhering less to religious dicta than poorer ones. In this case there are multiple confounding factors, for “belief in God is important for morality” is surely itself highly correlated with simple “belief in God.” The relationship here is very strong. My own view is that of Marx: countries where you are in bad shape and can’t get help from the government tend to be those where people find hope and solace in religion.

This is also true within countries: there’s a consistent pattern in the surveyed nations of people with higher income being less likely to see God as necessary for morality (and of course the higher-income people are less likely to be religious in general). 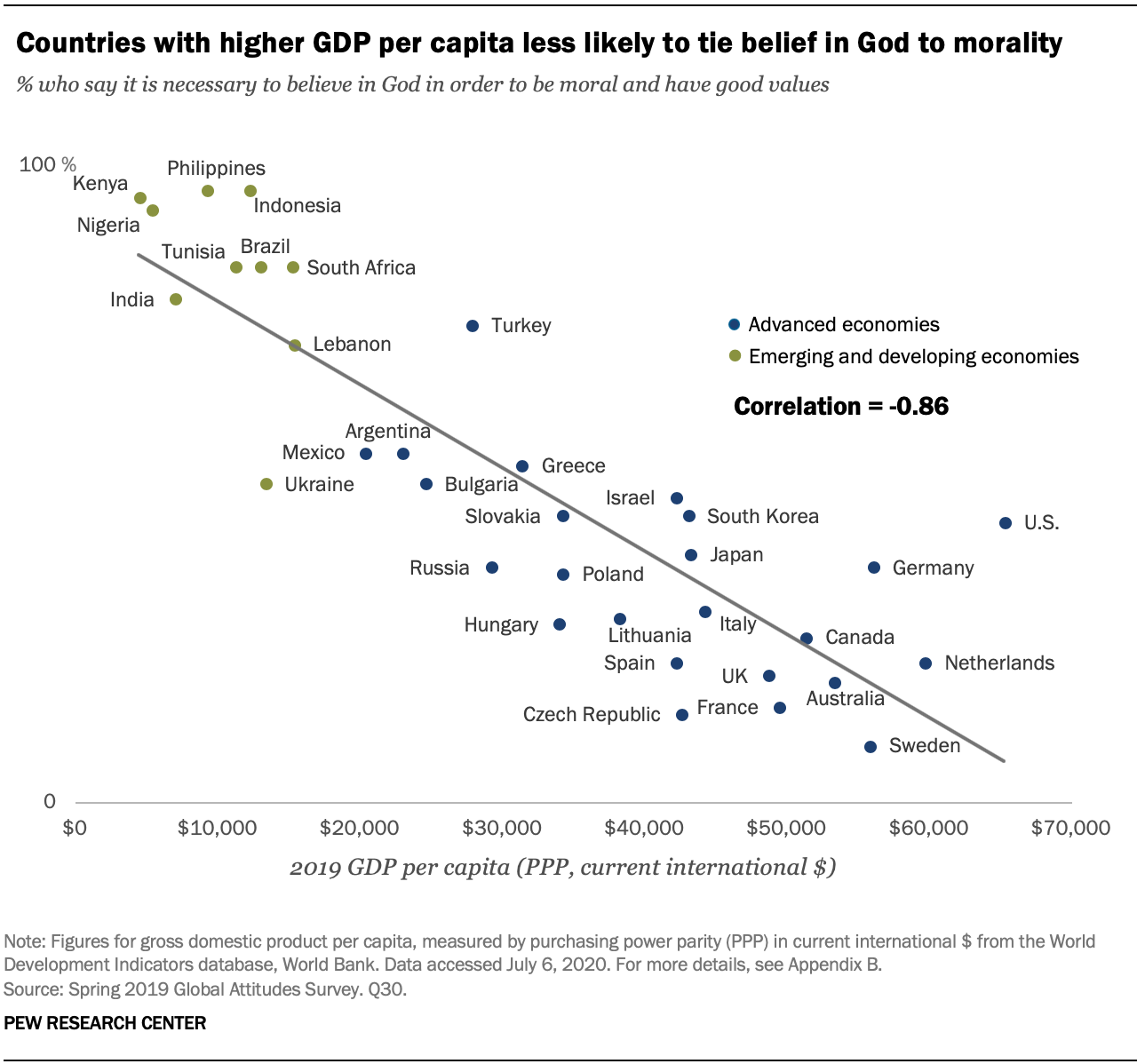 As expected, people with more education tend to connect morality with God to a lesser extent. Again, this is probably because of a negative relationship between education and religiosity:

In the comments below, reader Eric said I may have “buried the lede” by neglecting the rather large drop between 2002 and 2019, in the proportion of Americans who think God is necessary for morality. This is part of the increasing secularization of the U.S: 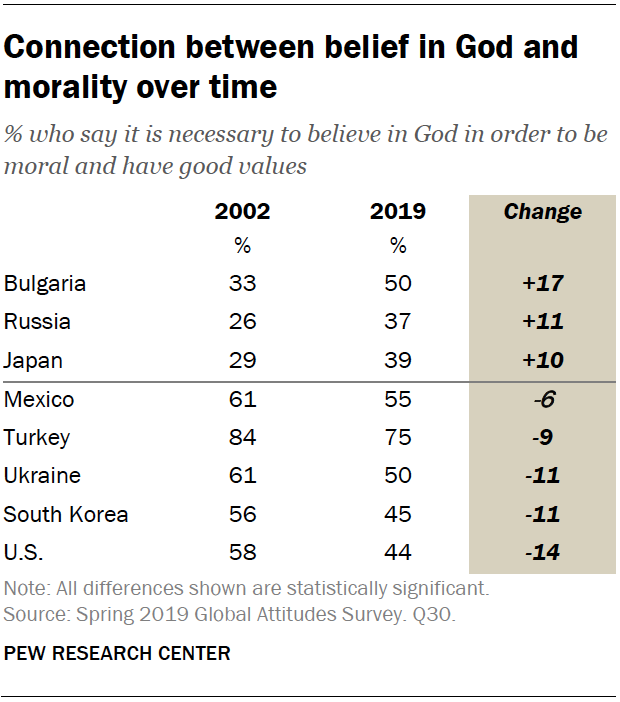 Finally, there’s a plot showing the variation among countries on the general importance of religion. Western Europe, Australia, South Korea, and Japan lead the pack for secularism, while Catholic, Muslim, and African Christian countries are those seeing religion as more important. That’s no surprise: 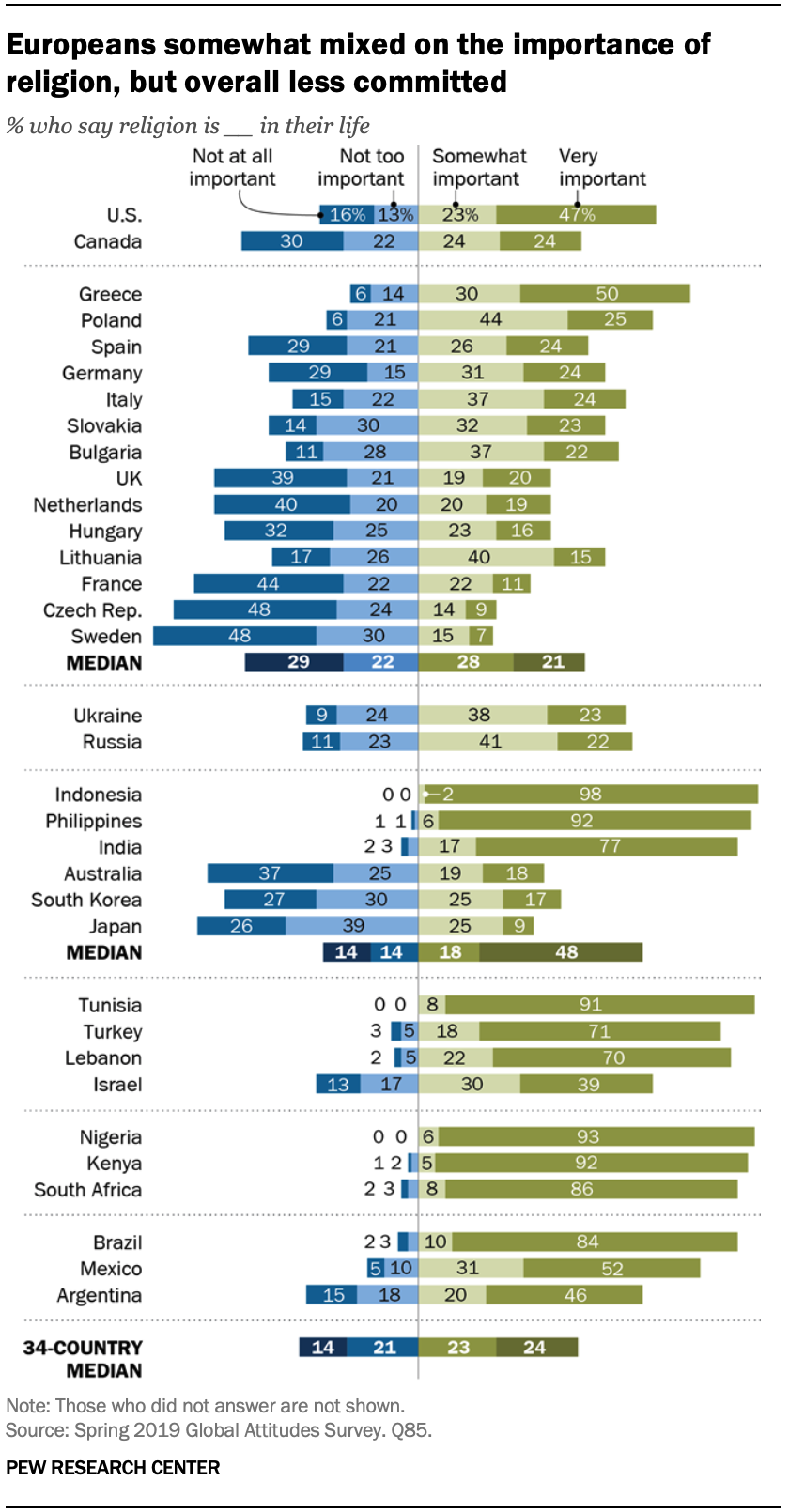 In truth, the failure of nearly half the world’s people to see that atheists can be moral, which should dispose of the “God-is-necessary” hypothesis, is depressing. But one could argue that for many religious people, “morality” consists largely of religious dictates: what you eat, who you sleep with and how, how you feel about gays and women, and so on. So, for example, Catholics and Muslims might see the free-loving and egalitarian Scandinavians as immoral.

68 thoughts on “A world survey: Do we need God to be moral?”