On this site, astronomy counts as “wildlife”, and readers Leo Glenn and Mark Jones sent some lovely pictures of Comet Neowise, which I haven’t been able to see. Leo and Mark’s words are indented; click photos to enlarge them.

While these technically aren’t wildlife photos (well, one might qualify), I thought your readers might enjoy these pictures I took of Comet Neowise, on the evening of July 21 from my front yard in western Pennsylvania. I am just a hobbyist photographer, and this was my first attempt at night sky photography. After some failed and frustrating efforts, I was able to get these photos, which turned out better than I expected. The hardest part was focusing the camera when I could see nothing in the viewfinder. I thought I could just set the focus at infinity, but when I did that the photos were blurry. In the end, I pointed the camera at the brightest object, which happened to be Jupiter, and was able to get an acceptable (though not perfect) focus. For those interested, I used a Nikon D7100 DSLR with a 35 mm lens, at f-1.8 and a 30-second exposure. I forgot to set the ISO, so the camera did that automatically, which was a mistake, but I was able to correct for it later in Photoshop. And I used the timer so my finger on the shutter release wouldn’t blur the photo. 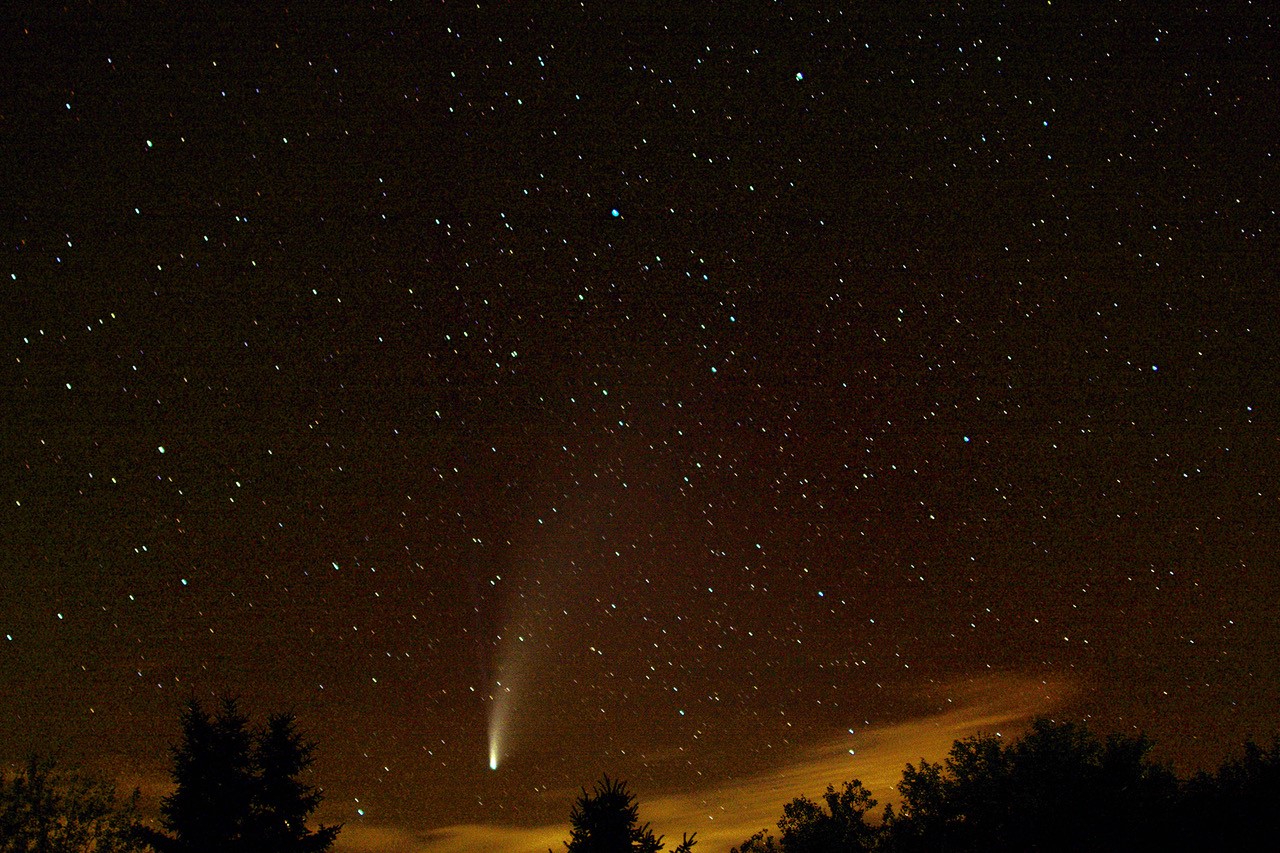 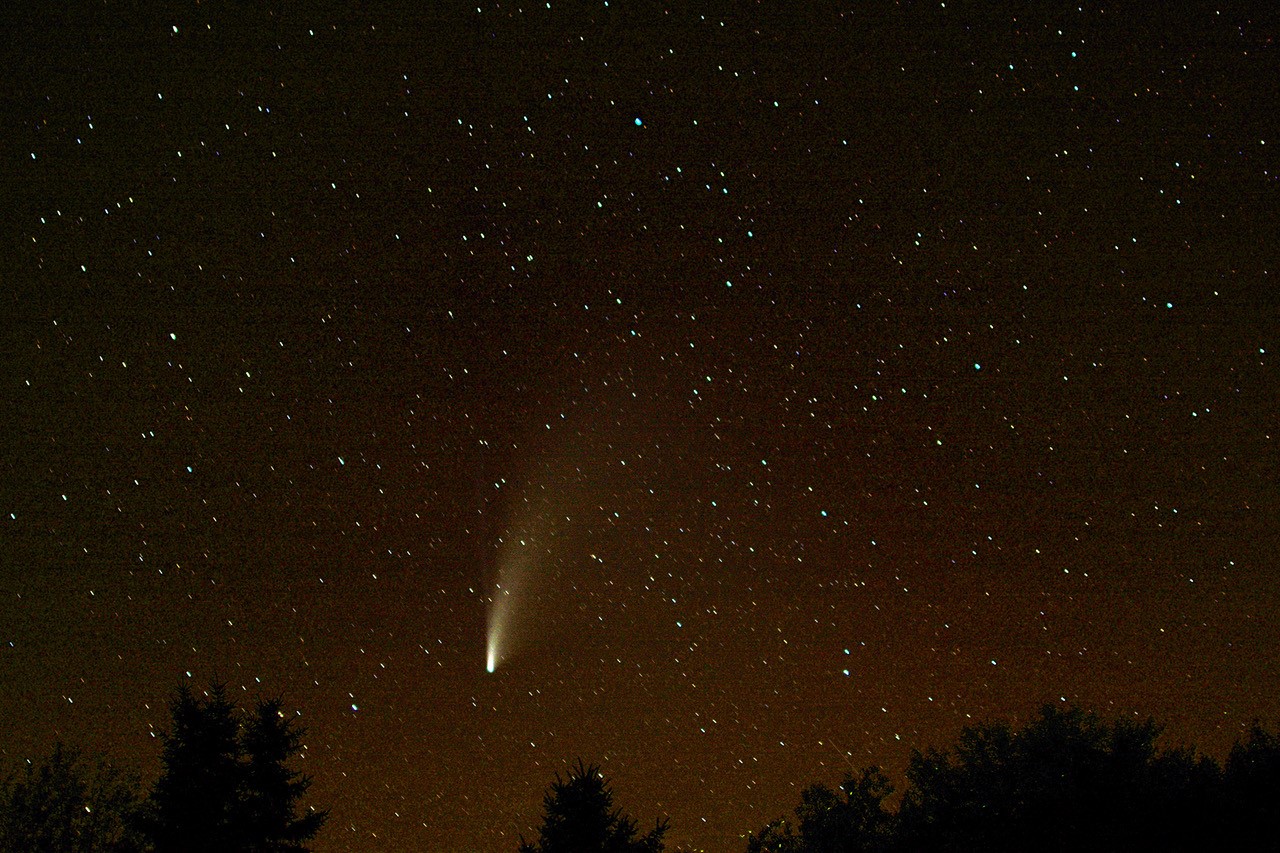 The red line is an airplane. I didn’t notice it until after I pressed the shutter release. 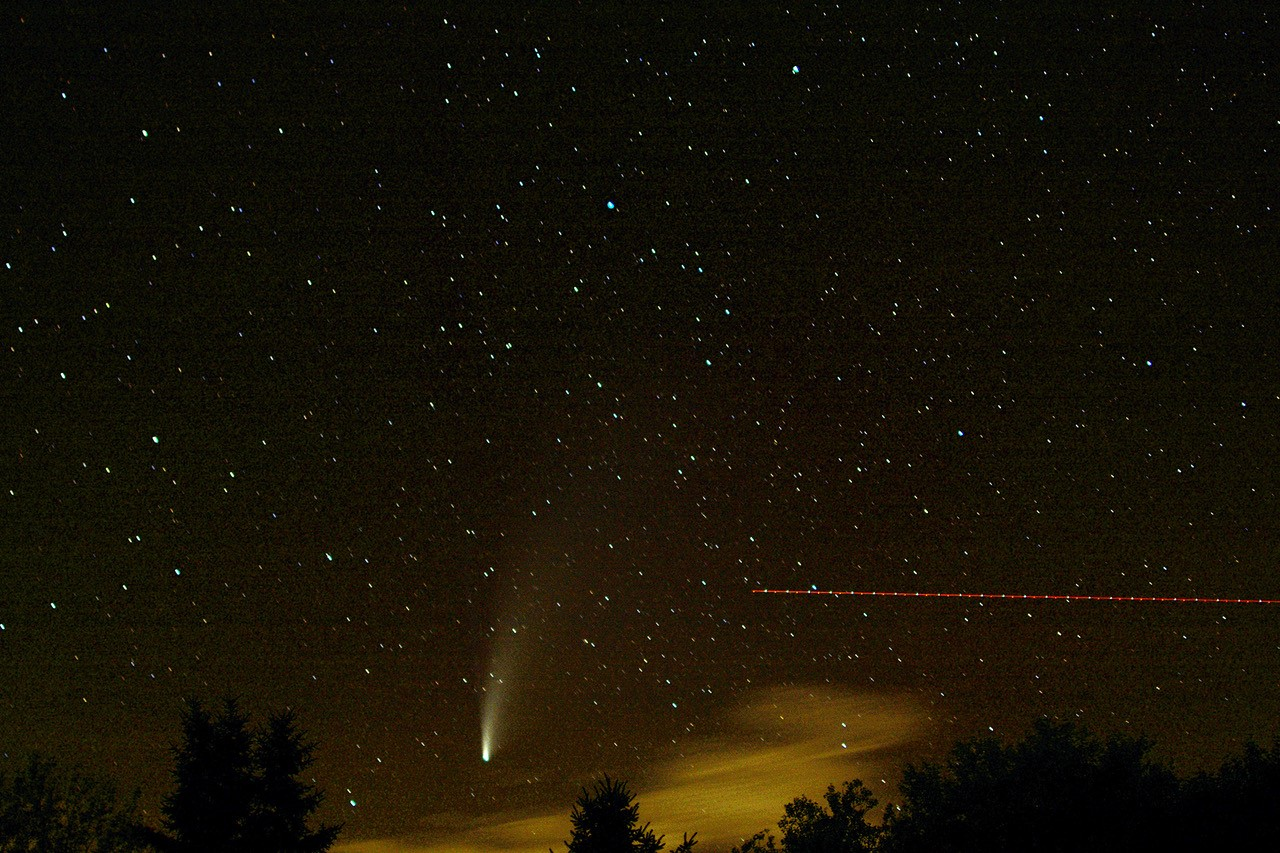 Eventually, clouds started to roll in, but that also provided some interesting photo opportunities. This is the only photo that might qualify as a wildlife photo. You can see a couple fireflies (Photinus and/or Photuris sp.), one on the left zooming rather close to the camera, and one at the bottom of the photograph toward the right,  just over the top of a tree. 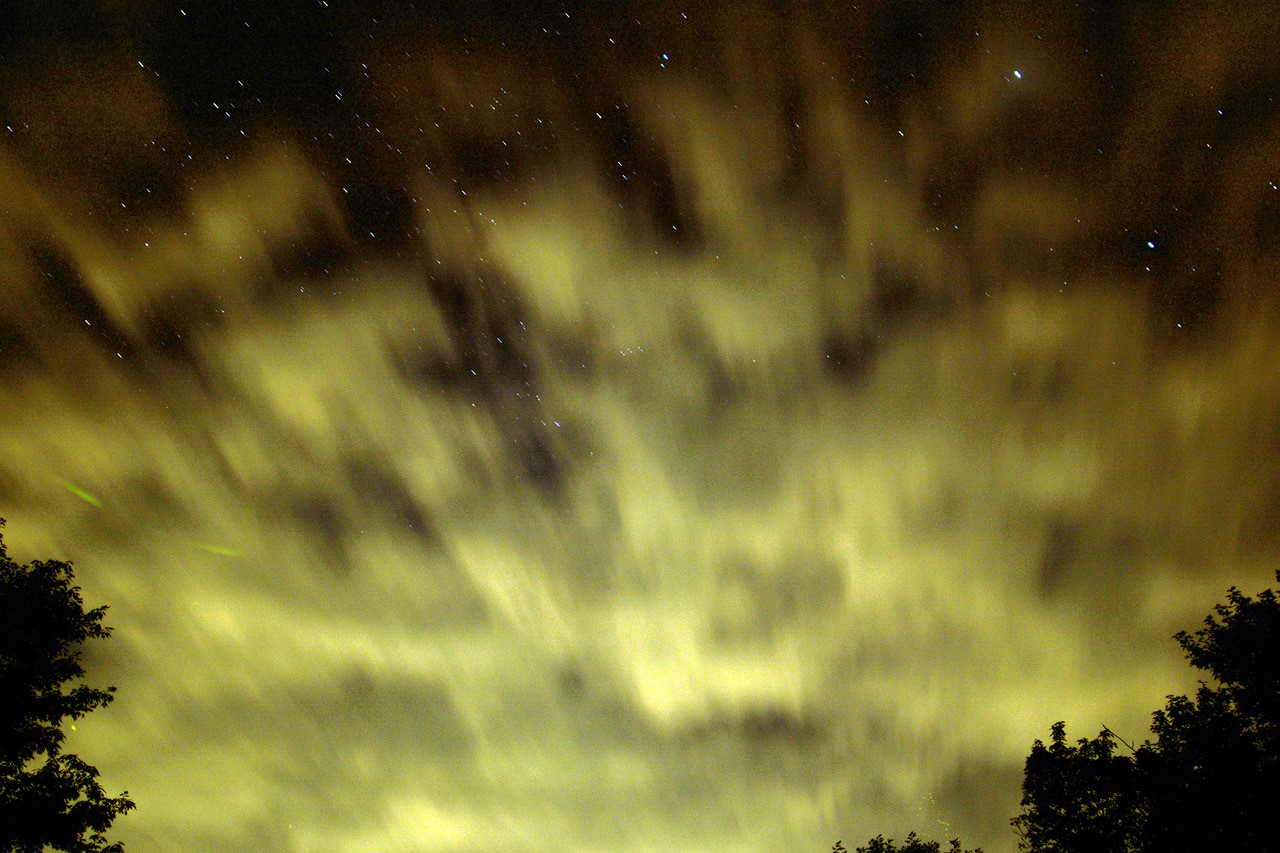 Finally, I couldn’t resist pointing the camera up to take a picture of the starry sky, and was stunned by how many stars, invisible to the naked eye, appeared in the photo. I couldn’t help hearing Bill Shatner’s voice: “Space. The final frontier.” 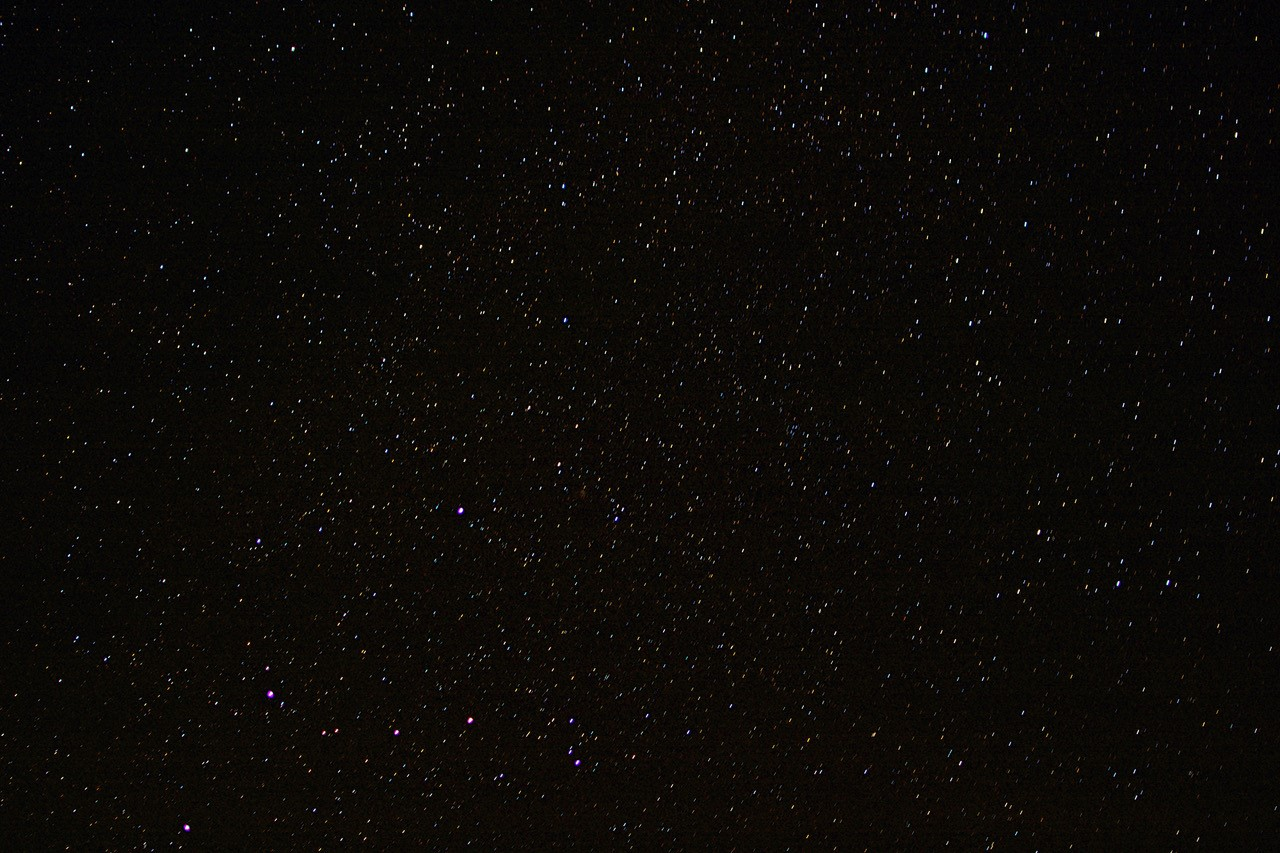 You may want to add these to the pile of Neowise photos; it becomes rather compulsive to try to capture this excellent ‘omen’ for posterity, even though many have already!

One is taken from my kitchen window, and the other shows the comet above the house from the driveway. 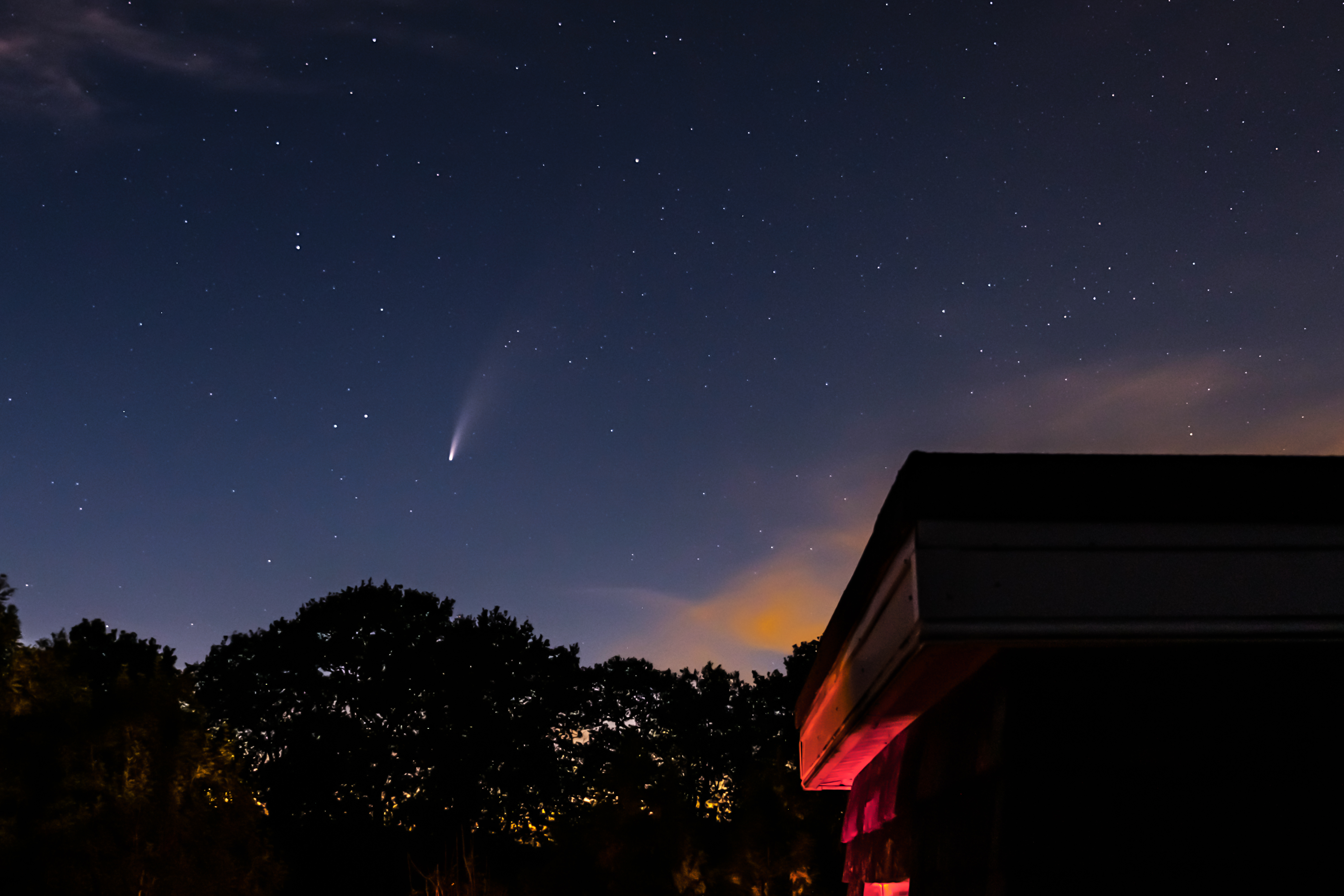 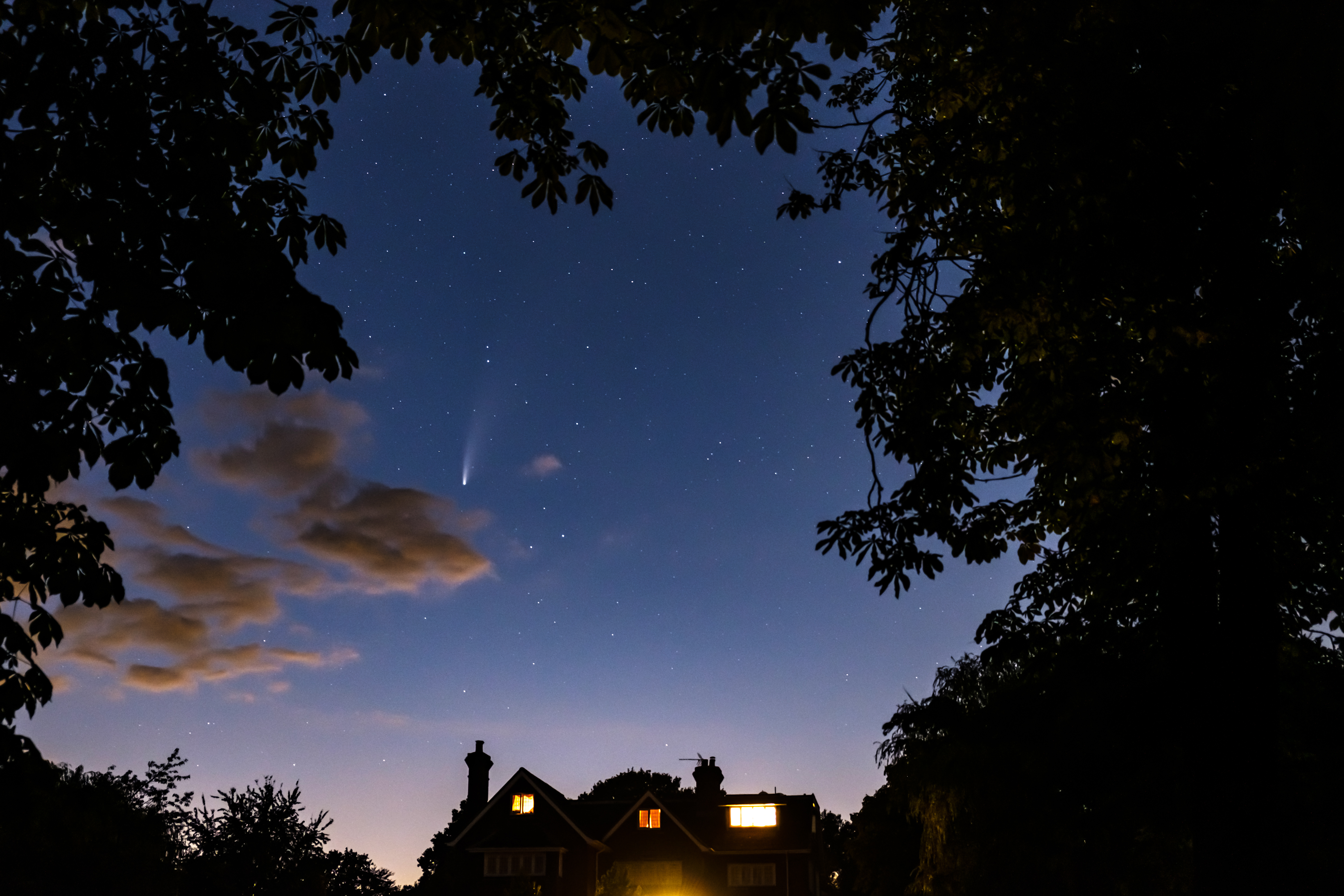