Six days ago, I wrote about some data (presented by the Telegraph and Christian Today) showing the degree of religiosity among various countries in the world—the proportion of inhabitants who agreed that “religion was very important in their lives.” A subjective look at the rankings suggested that the most religious countries were also the least well off. That impression is statistically supported by Greg Paul’s observation of a negative correlation between religiosity and well being, the latter quantified by using the “Successful Societies Scale.”

In short, countries having more successful societies are, on average, also those that are less religious. There are various interpretations of this correlation, though I tend to agree with many sociologists that people in dysfunctional societies tend to turn more or cling more to God. I call this the “Marx Hypothesis,” based on his famous quote:

Religious suffering is, at one and the same time, the expression of real suffering and a protest against real suffering. Religion is the sigh of the oppressed creature, the heart of a heartless world, and the soul of soulless conditions. It is the opium of the people

I won’t defend that hypothesis in this post, though there are data showing that when people become less well off, they subsequently become more religious. If that’s the case, then the way to eliminate religion and its superstitions from this planet is simply to eliminate the conditions that breed it: that is, to make societies better off.

In that post I also gave data from the 2013 “World Happiness Report“, a survey of 156 countries published by the United Nations Sustainable Development Solutions Network. In their report, “happiness” is estimated using several indices of well being. Looking at the ranking of the 25 happiest and 25 unhappiest countries in the world, I said this:

I haven’t run the stats on these, but I’ll bet that happiness is negatively correlated with religiosity.

Well, a kindly reader, who earns big plaudits from me, has run the stats incorporating the degree of religiosity of many countries. As he noted:

And, sure enough, the happiest countries turn out to be the least religious. Here’s the reader’s plot showing the relationship for 52 countries having data on both measures: 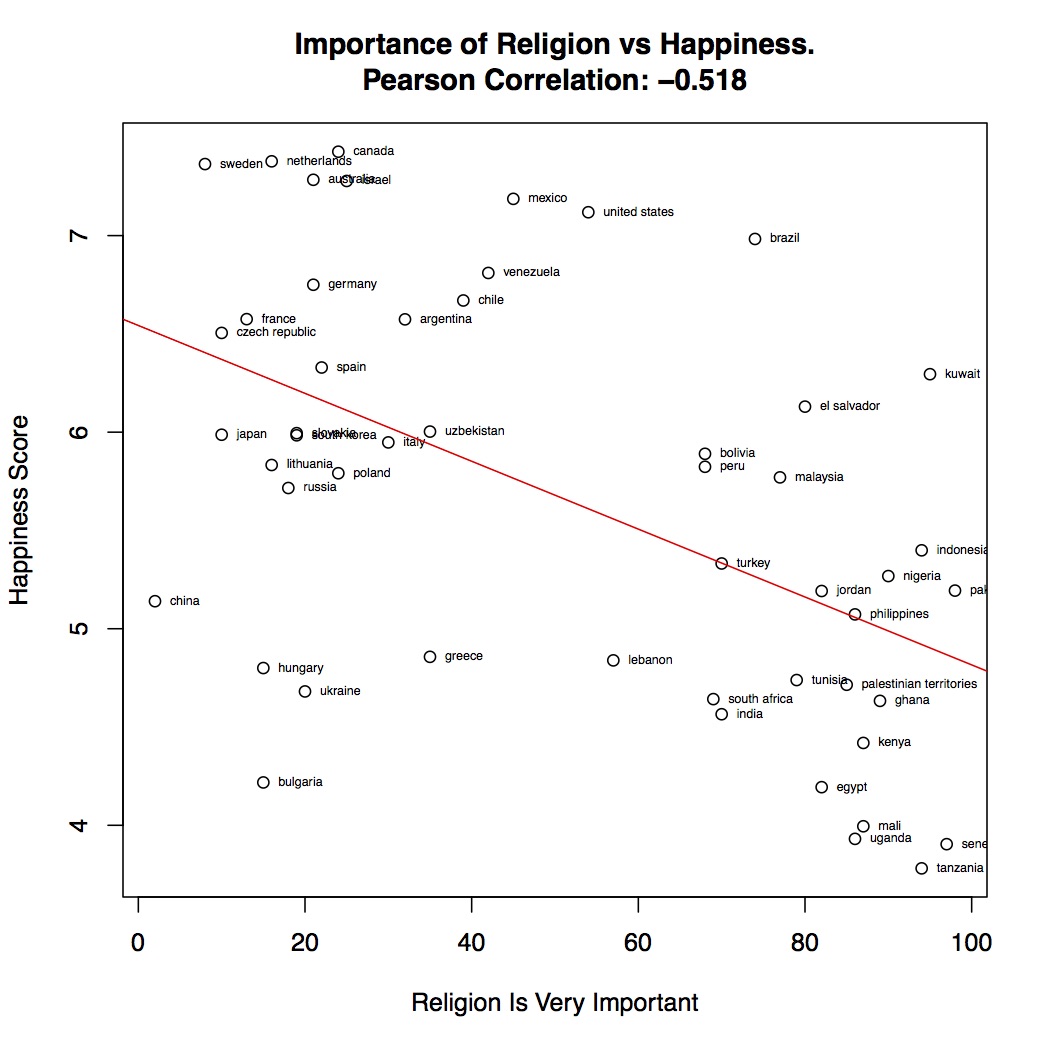 As you can see, the relationship is striking: there’s a bunch of countries at the upper left and lower right, and those in the former region tend to be First World countries in Europe, while the latter tend to be those in Africa and the Middle East. There are of course some outliers, like poor Bulgaria, which is both atheistic and unhappy, and Brazil, which is both religious and happy.

While the data support the hypothesis that unhappiness makes or keeps people religious, it also supports the hypothesis that religion makes people unhappy. And, of course, the correlation could reflect other variables not considered. As I said, I happen to think the first idea is correct (people tend to either turn religious or remain religious if they don’t have a strong sense of well being), but I won’t discuss this at length. And remember that these data points are probably not independent, for both poverty and religiosity tend to have historical causes that go beyond countries to entire regions of the world.

But regardless of the reason for this correlation, it certainly doesn’t support the claim of believers that religion brings happiness.