Mark Thompson, former director general of the BBC, has resigned his position as chief executive of the New York Times, which he’s held since 2012. This doesn’t appear to be a case of firing or of internal trouble at the paper. As the Guardian reports below (click on screenshot), Thompson had considerable success in expanding the digital platform of the paper:

The former BBC director general helped turn the outlet into a digital success story thanks to a successful paywall strategy which has helped it attract more than 5 million paying subscribers and hire hundreds of journalists at a time when much of the rest of the industry has faced deep cuts.

And Wikipedia adds this:

In 2015, he pledged to transform the Times into an “international institution”, the same way “we once successfully turned a metro paper into a national one”.  The Times now has more international digital subscribers than it had total digital subscribers when Thompson took over as CEO. Under Thompson’s leadership, The New York Times became the first news organization in the world to pass the one million digital-only subscription mark. As of May 2020, the company surpassed 5 million digital-only subscriptions, and 6 million total subscriptions, accounting for nearly sixty percent of the company’s revenue.  In 2015, Thompson set the goal of doubling the company’s digital revenue by 2020. The goal was met ahead of schedule in 2019. The company’s new goal is to have 10 million subscriptions by 2025.  He has also predicted that the print paper will last for at least 15 more years. 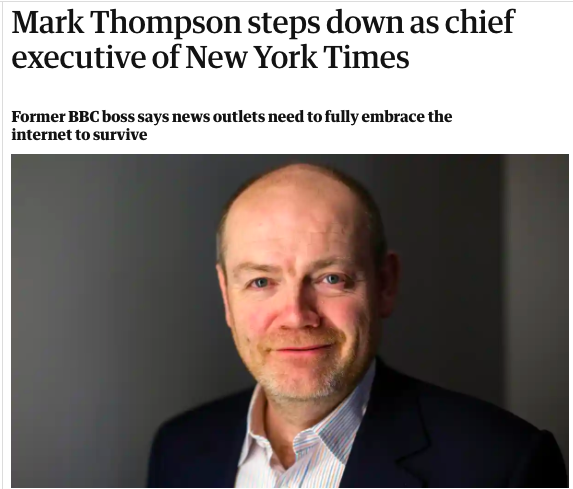 I suspect Thompson just wanted to move on after accomplishing what he wanted, but that also included, to my mind, wrecking the New York Times as a bastion of reliable and objective journalism. In fact, Thompson’s strategy, described below, almost guaranteed that the paper, despite becoming more financially secure, would degenerate:

In an exit interview, Thompson told the Guardian that news outlets need to change their internal cultures if they want to build a secure financial future: “The process of digital transformation can’t be done on a cost-cutting basis, it requires investment. It means being brave,” he said. “You can’t do it with the old tools and the old body of expertise. In terms of trying to find winners, it’s going to be around boldness, around younger audiences and truly embracing digital. The risk is if you think you can just eke it out. That’s not going to work. The economics slowly deteriorate.”

Thompson said he was warned against taking the job in 2012 because the Times was seen as a conservative institution that would resist change. He said his success there was built by fully embracing the internet, hiring younger employees and adopting the attitudes of Silicon Valley tech companies: “Letting very young, junior people play with big dangerous things. It’s a long way from the way things are done in many newsrooms.”

And this is exactly what is wrecking the paper for many of us, despite any financial success. Those “younger audiences” who have “Silicon Valley tech attitudes” and can “play with big dangerous things” is simply a restatement of this: “We’re going to hire woke youngsters and let them say whatever they want—so long as their ideology is consistent.”  As far as the Times being a “conservative institution,” I don’t think that’s the way most of us perceived it. Rather, it was a classically liberal paper which tried to maintain objectivity in its news column.  No more. The youngsters have a big, expensive toy to play with.