Andrew Sullivan is moving to a new site, his own Daily Dish revived as the Weekly Dish. But his farewell piece in New York Magazine is not last week’s column, but today’s long article—about plagues. Well researched and engagingly written, it’s a change from Sullivan’s usual discussions of politics and sociology. It’s long (7 pages printed out in 9-point type), but well worth reading. Click on the screenshot to do so: 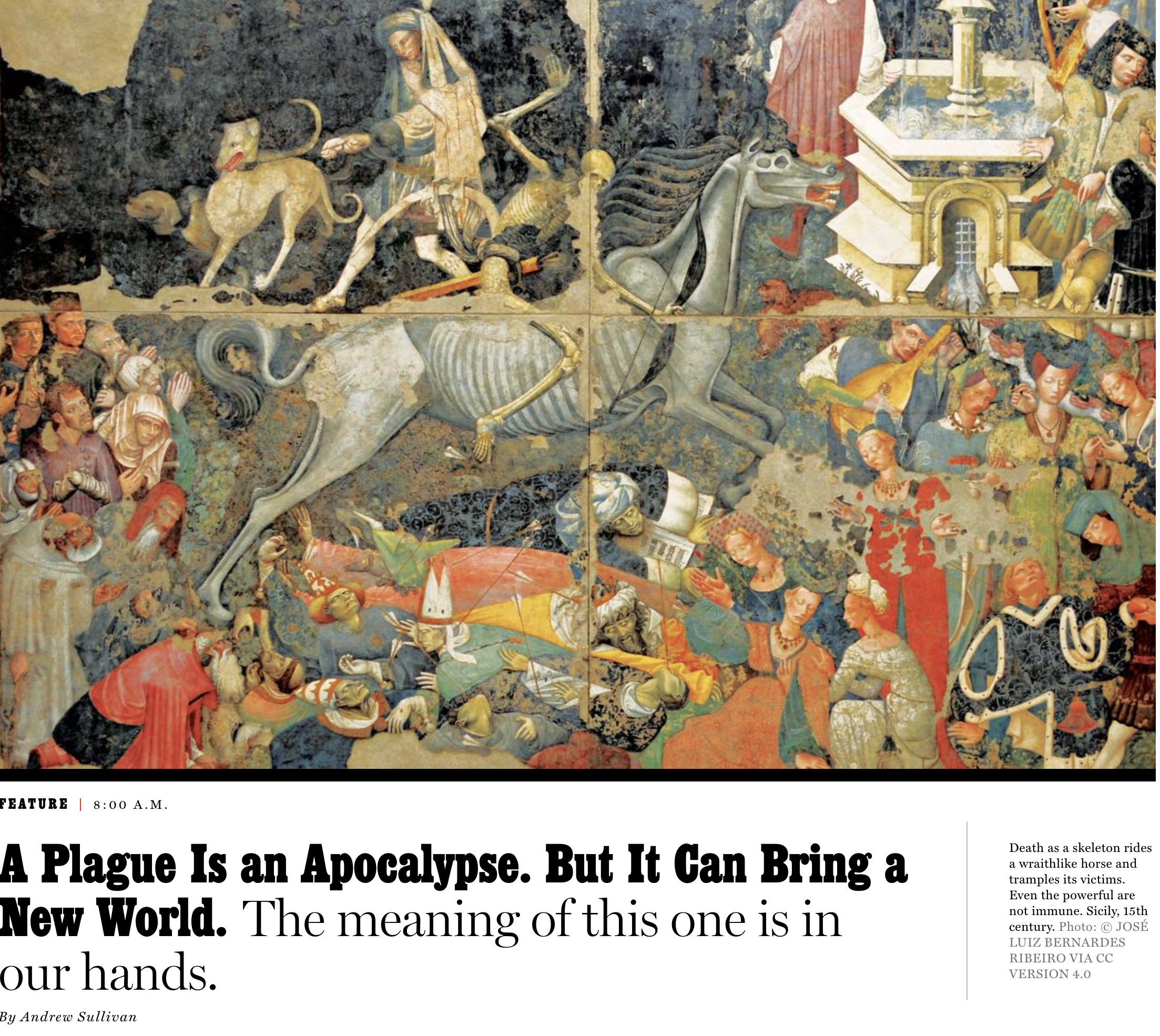 If you haven’t read one of the many good books on plagues and epidemics, this is a worthy substitute. Sullivan’s aim is not only to describe the many plagues that afflicted our species over recorded history, but also to explain why they happened as well as the sequelae, both good and bad. Going from smallpox in the Roman era through bubonic plague in medieval Europe and the big effect of smallpox on the American Continental Army to the “Spanish influenza” and then the viruses of today, the article is a pretty horrifying chronicle. Sullivan describes his own experiences during the AIDS epidemic (which, he argues, helped speed the acceptance of gay rights), and winds up musing about how Covid-19 might lead to a reinvention of society in ways both good and bad. The worst “bad” is the globalization and disruption of the environment that may release more plagues to come: Sullivan is pretty sure we’ll be ravaged now and again for the forseeable future. All in all, it’s not a happy piece.

Paradoxically, the Black Death also reshaped and rebuilt the rural economy to benefit the poor. With half the population suddenly wiped out by bubonic plague, food became plentiful and cheap as soon as the harvests returned, because there were so many fewer mouths to feed, and the price of labor soared because so many workers had perished. Day laborers suddenly had some leverage over the owners of land and exploited it. A manpower shortage also led to innovations. With fewer people on higher wages, for example, the cost of making a book became prohibitive — because it required plenty of scribes and copiers. And so the incentive to invent the printing press was created. Industries like fishing (new methods of curing), shipping (new kinds of ships both bigger and requiring less manpower), and mining (new water pumps) innovated to do more with fewer people. The historian David Herlihy puts it this way: “Plague … broke the Malthusian deadlock … which threatened to hold Europe in its traditional ways for the indefinite future.”

In these two bookends of European plague, in the sixth and then the 14th century, you see two ways in which epidemic disease changed society and culture. In one, the disruption and dislocation of mass disease sent the world into a long de-civilizing process; Roman society was gutted and its empire dissolved into various fiefdoms. In the other, a mass-death event triggered a revival, economic and spiritual, in a kind of cleansing process that restarted European society. They were caused by the same disease. In one case, it brought collapse; in the other, rebirth.

If the 1918 flu pandemic were to occur today, one 2013 study found, it would kill between 188,000 and 337,000 Americans. The reason the death toll would be so much lower than the 675,000 Americans who actually died is that medicine has improved. Many of those who died endured bacterial co-infections, which are now far more treatable with antibiotics. Globally, somewhere around 100 million human beings perished.

The flu’s symptoms were horrifying. In her book Pandemic 1918, Catharine Arnold notes that “victims collapsed in the streets, hemorrhaging from lungs and nose. Their skin turned dark blue with the characteristic ‘heliotrope cyanosis’ caused by oxygen failure as the lungs filled with pus, and they gasped for breath from ‘air-hunger’ like landed fish.” The nosebleeds were projectile, covering the surroundings with blood. “When their lungs collapsed,” one witness recounted, “air was trapped beneath their skin. As we rolled the dead in winding sheets, their bodies crackled — an awful crackling noise which sounded like Rice Crispies [sic] when you pour milk over them.”

Do we go back to where we were, or do we somehow reinvent ourselves for a new future?

You can see the potential contours of a similar response today. This plague makes a strong argument for a more aggressive approach to public health, which would mean, at a minimum, extending health insurance to everyone in the country, as well as reform and renewal for the disgraced CDC and WHO. It could unleash a new wave of infrastructure spending to repair the immense damage to the economy. It could, and absolutely should, end the argument over preventing climate change — because it is so deeply connected to new viral outbreaks, as shifts to hotter weather portend a highly dangerous upheaval in the animal and microbial worlds. And while I worry that this plague could well usher in a new era in which traditional liberalism gives way to a freshly invigorated collective leftism, particularly around identity politics, it could also deeply wound the appeal of the populist right in America, which, once in government, failed the core test of preventing an open-ended, lengthy period of infection, sickness, and death.

Some existing trends might also intensify. It’s hard to see how a policy of mass immigration or free trade will survive public scrutiny for long in a world where viruses cross borders with such surpassing ease. The U.S.-China relationship, already tense, could deteriorate still further. Living online, with all the isolation and depression and extremism that can generate, is now an even stronger and widespread norm, as we avoid physical interaction even more than we did previously. Same with working from home: The atomization of our culture, the already increasing levels of depression, loneliness, and antisocial behavior could deepen further. The collapse of small retail has been accelerated, and the power of the giant tech companies is ever greater. And the epidemic has not assuaged the yawning gap between rich and poor. While COVID relief has made a real, temporary impact, the stark social and economic inequality in the country looms as large as ever. Rates of suicide, drug abuse, and overdosing could climb even higher.

And we are not in control. If you are still complacent that human science and technology have removed the potential for the mass extinction of humans, you should wake up. We have lucked out so far. COVID-19 is extremely transmissible but not that fatal to most people, all things considered. But even those countries that are success stories didn’t see it coming in the first place and have experienced resilient breakouts. We still have no vaccine — it may be a year or more before we get one, and we do not know how effective it will be. Imagine the next pandemic pathogen as something as devastating as Ebola and as contagious as the flu. We are as defenseless as we have ever been. This relatively mild virus shut the entire world down for a couple of months. What happens when a much worse one shuts it down for longer?

Knowledge of a brutal new virus does not prevent its spread. Only a much more profound reorientation of humankind will lower the odds: moving out of cities, curtailing global travel, ending carbon energy, mask wearing in public as a permanent feature of our lives. We either do this to lower the odds of mass death or let nature do what it does — eventually so winnowing the human stock that we are no longer a threat to the planet we live on.

That’s the sobering long view. It is hard to look at the history of plagues without reflecting on the fact that civilizations created them and that our shift from our hunter-gatherer origins into a world of globally connected city-dwelling masses has always had a time bomb attached to it. It has already gone off a few times in the past few thousand years, and we have somehow rebounded, but not without long periods, as in post-Roman Europe, of civilizational collapse. But our civilization is far bigger than Rome’s ever was: truly global and, in many ways, too big to fail. And the time bomb is still there — and its future impact could be far greater than in the past. In the strange silence of this plague, if you listen hard, you can still hear it ticking.

Let nobody say that Andrew Sullivan is an optimist.

And I need a drink.