As I’ve said before, I think one can make a reasonable case for designating certain crimes as “hate crimes”. For if groups like Jews, blacks, or gays are targeted repeatedly for their identity alone, then increasing the penalties for such crimes, if you can establish the reasons for the crime, will act as a deterrent beyond the normal deterrents of the law.

Hate speech, though, is a different matter, for it often falls under the First Amendment, and, even when it doesn’t it’s always a slippery concept. While it’s fairly easy to define a hate crime (you need a motive and a victim), hate speech is notoriously hard to pin down. I’ve written about this many times before, emphasizing that one person’s free speech—speech intended to provoke discussion—is another person’s hate speech. I’ll mention Steve Bannon, Milo Yiannopoulos, Christina Hoff Sommers, Charles Murray, Louis Farrakhan, and others whose speech has been deemed not just hate speech, but speech that should be banned, and certainly not heard. While the courts can adjudicate hate crimes, who would you choose to adjudicate hate speech? (Hitchens was famous for asking that question.)

Well, Reddit has taken it upon itself to adjudicate the speech on its platform according to new guidelines given below (click on screenshot). I’ve put their guidelines below, indented. (Emphasis is mine.)

Rule 1: Remember the human. Reddit is a place for creating community and belonging, not for attacking marginalized or vulnerable groups of people. Everyone has a right to use Reddit free of harassment, bullying, and threats of violence. Communities and people that incite violence or that promote hate based on identity or vulnerability will be banned.

Marginalized or vulnerable groups include, but are not limited to, groups based on their actual and perceived race, color, religion, national origin, ethnicity, immigration status, gender, gender identity, sexual orientation, pregnancy, or disability. These include victims of a major violent event and their families.

While the rule on hate protects such groups, it does not protect all groups or all forms of identity. For example, the rule does not protect groups of people who are in the majority or who promote such attacks of hate.

Some examples of hateful activities that would violate the rule:

Additionally, when evaluating the activity of a community or an individual user, we consider both the context as well as the pattern of behavior.

Of course Reddit has the right to regulate speech on its site as it sees fit; it’s a private organization. The First Amendment doesn’t apply there, though I always think private organizations should adhere to the courts’ interpretations of the First Amendment as far as possible. What is troublesome here is that while groups are protected on the basis of “race, color, religion, national origin, ethnicity, immigration status, gender, gender identity, sexual orientation, pregnancy, or disability”, these rules don’t apply if a group is “in the majority”. I’m not sure what that means, unless it refers specifically to white people or women (who outnumber men).

And if that’s what it means, does that mean that it’s okay to denigrate white people, like Louis Farrakhan does with his hateful diatribes against both whites and Jews? Is it okay to denigrate women because they comprise 50.8% of the U.S. population. (It needn’t be added that, of course, denigrating men will still be okay.) If Reddit is in Israel, is it okay to go after Jews?

My point here is that although Reddit can ban hate speech, why should there be exceptions about who can be hated without sanction based solely on their numerical predominance? Bigotry and hate are bigotry and hate, no matter who the target. Note that “posts describing a racial MAJORITY as sub-human and inferior to the racial MINORITY” would be fine under reddit’s rules. In fact, that’s just what Farrakhan does, but is that okay?

If you’re going to ban hatred of people for belonging to groups, it should apply to all groups, not just minorities.

Here’s Maajid Nawaz on his LBC show, who apparently shares similar views on the “inconsistent application” of social-media censorship. (Click on screenshot to hear his exercised but reasonable argument.): 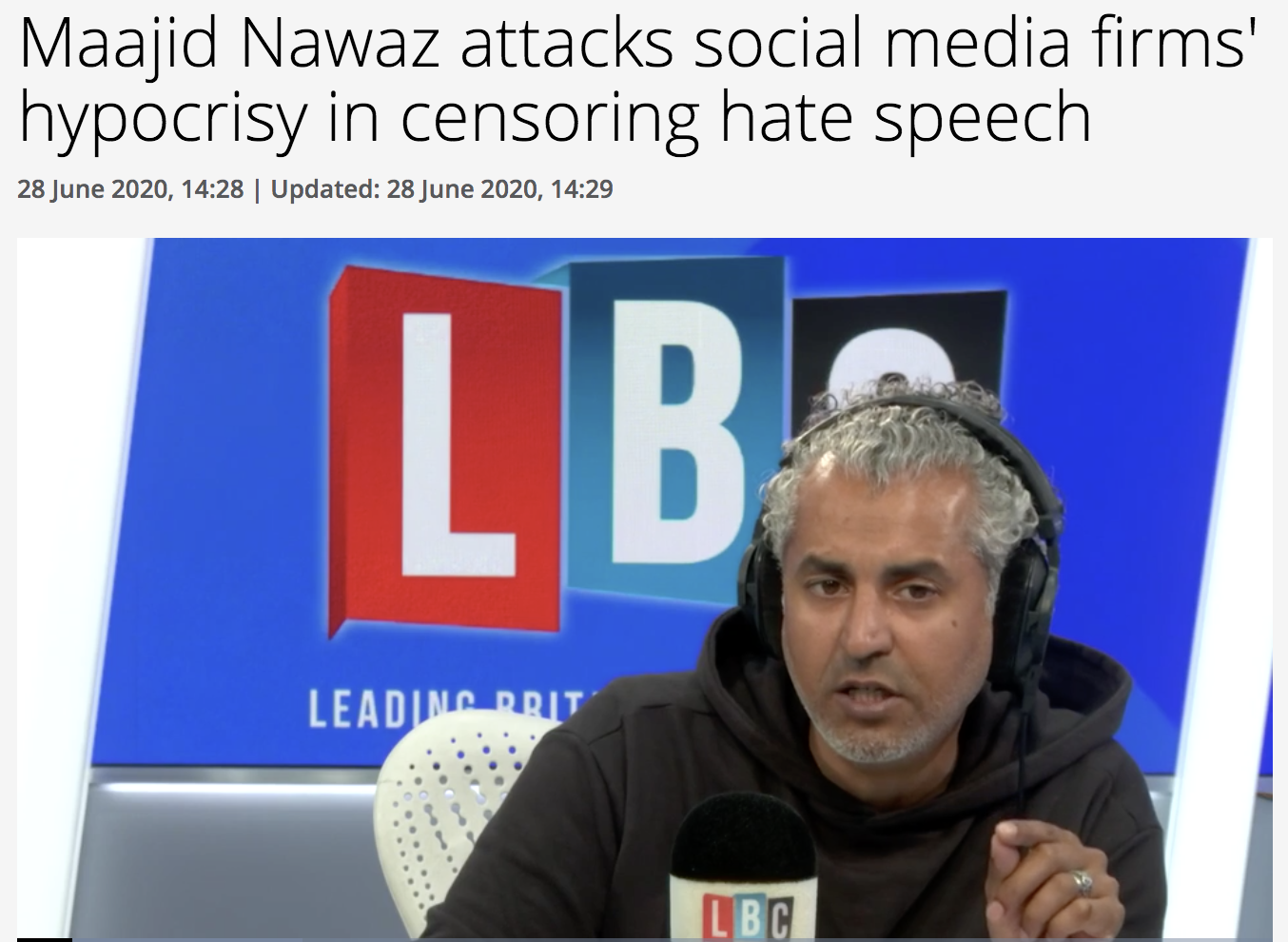