There’s been some discussion about what the demand for “defunding the police” really means. To some it means cutting police budgets in ways to minimize their brutality, and the example often used is their acquisition of discarded equipment from the U.S. military, or more training in social work by cops. To others it means deeply slashing police budgets, although where the cuts are to go isn’t often specified. Often the slashed funds are to be diverted to social programs whose existence, they claim, will severely reduce crime.

And to others in the “disband the police” camp, it means, as adherent Mariame Kaba says in the New York Times op-ed below, the literal abolition of police departments. And that’s what she argues (click screenshot to read). There was a lot of criticism about what Tom Cotton said in his NYT editorial, because his call for putting the military in U.S. cities to police demonstrations was just dumb. Well, Mariame Kaba’s op-ed seems just as dumb to me, but it meets with no criticism because it’s woke.

Kaba is a writer, organizer, and activist advocating for abolition of the police and the prison-industrial complex.  Here are her arguments for disbanding the police:

1.) Most cops don’t spend their time going after bad guys, but writing traffic tickets, fielding noise complaints, ad other issues. She quotes someone saying “The vast majority of police officers make one felony arrest a year. If they make two, they’re cop of the month.”  This, of course, overlooks the deterrent effect of simply having a police presence. If there weren’t cops on the street, people would be running red lights and stop signs willy-nilly, and traffic accidents would increase. Likewise with crime in general, as the Montreal police strike of 1969 showed.

2.) The tendency of cops to “keep black and other marginalized people in check through threats of arrest, incarceration, violence, and death” does not create a safer society. To the extent that this is true (and tomorrow we’ll see a dissent by John McWhorter), this needs to be stopped. Police should not be treating people differently based on their race. But before we make this assertion, we need evidence that it’s the case. I suspect it is for many interactions between police and citizens, but it’s not so clear for things like cops killing people.  The solution is not to abolish the police, but to train them better, and to ruthlessly weed out the bad apples. Bodycams must be turned on at all times, and so on.

3.) “Police officers break rules all the time.” Kaba mentions slashing tires, shoving people unnecessarily, arresting journalists, and so on. Again, the solution is to instill police officers with a respect for the rules, which includes the threat of firing and, if they break the law, of arrest.

Kaba’s error here is to propose complete abolition of police departments in a naive faith that people who aren’t policed will act well, eliminating the need for cops. But if you live on planet Earth, this is palpably ridiculous. Alternatives to cops, she says, are more social work, health care, better housing, and so on. And yes, these are things we must do to eliminate the inequalities created by history, and surely will help eliminate crime, a lot of which stems from poverty. But not all of it!  We will still have crimes not motivated by poverty (this is assuming we can get rid of it, which is a long way off): murders, rapes, white-collar crime, terrorism, and so on. And of course many of these crimes have nothing to do with social inequality.

But here: read what Kaba wants:

But don’t get me wrong. We are not abandoning our communities to violence. We don’t want to just close police departments. We want to make them obsolete.

We should redirect the billions that now go to police departments toward providing health care, housing, education and good jobs. If we did this, there would be less need for the police in the first place.

We can build other ways of responding to harms in our society. Trained “community care workers” could do mental-health checks if someone needs help. Towns could use restorative-justice models instead of throwing people in prison.

What, no sequestration of dangerous people, sequestration that not only keeps the baddies out of society, but could also act as a deterrent and, in an ideal world (not the U.S.!) help reform people?  Restorative justice, in which offenders meet with those they’ve harmed and work out resolutions, can work in some cases of nonviolent crimes, but will it work with armed robbers, rapists, or people like the Unabomber, Timothy McVeigh, or other sociopaths? What would Kaba do with a serial killer, or someone who murders a bank clerk while committing a robbery? And even with restorative justice, how do you catch the offender in the first place without police? Are they just going to come forward and confess?

And what about rape or sexual assault, crimes not clearly connected with poverty? Kaba’s solution to this seems heartless; she simply claims “but cops rape, too, and, anyway, most rapists are never caught.”:

What about rape? The current approach hasn’t ended it. In fact most rapists never see the inside of a courtroom. Two-thirds of people who experience sexual violence never report it to anyone. Those who file police reports are often dissatisfied with the response. Additionally, police officers themselves commit sexual assault alarmingly often. A study in 2010 found that sexual misconduct was the second most frequently reported form of police misconduct.  In 2015, The Buffalo News found that an officer was caught for sexual misconduct every five days.

Got it? Because there’s still rape, police are useless against the crime.  True, it’s hard to catch and successfully prosecute rape, but, according to the Department of Justice, “About 234,000 convicted sex offenders are under the care, custody, or control of corrections agencies on an average day.” 5% of the U.S. prison population consists of sexual offenders. What would Kaba do about this? She has no solution.

Instead, she counts on people’s goodwill to ensure that a world without cops would largely be a world without crime. I think she’s sorely mistaken. And her palaver about “restorative justice”, and the feel-good sentiments below, don’t make a good case for abolishing the police. By all means reform police departments, and by all means ensure that more money flows to the root causes of crime, including inequality, poverty, and lack of opportunity. But seriously, abolish the police? Who would you call if you were raped, or if someone is trying to break into your house? A social worker?

When people, especially white people, consider a world without the police, they envision a society as violent as our current one, merely without law enforcement — and they shudder. As a society, we have been so indoctrinated with the idea that we solve problems by policing and caging people that many cannot imagine anything other than prisons and the police as solutions to violence and harm.

People like me who want to abolish prisons and police, however, have a vision of a different society, built on cooperation instead of individualism, on mutual aid instead of self-preservation. What would the country look like if it had billions of extra dollars to spend on housing, food and education for all? This change in society wouldn’t happen immediately, but the protests show that many people are ready to embrace a different vision of safety and justice.

Holy Kropotkin, Batman! A vision entirely without police? Does any country in the world lack police? I don’t think so—even the most progressive ones, and even countries far more racially homogeneous than the U.S. Until I see a convincing case for why a country without police would be better than one with police, and some concrete plans for how we replace the cops but ensure people’s safety, I’m not signing on.

By the way, this is also happening at the University of Chicago (and other schools as well), where some faculty and many students want the large University of Chicago police department to be disbanded. There was in fact a demonstration for this yesterday, and you can read their “demands” on the Facebook page below (click on screenshot).

This won’t work either, especially because they explicitly say that they’re not trying to replace the University of Chicago police with the City of Chicago’s police. No, they just want no cops on or around the campus (the U of C police patrol an area much larger than the campus, and although some of them have harassed black students, by and large they’re a potent force keeping our campus safe. Without them, we’d suffer an attrition of faculty, staff, and students, who depend on campus police to help keep the area safe.  Sometimes I wonder if people who make demands like this are thinking clearly. No, let me be a bit stronger: I think people who make demands like this are not thinking clearly, or perhaps are involved in some kind of performative virtue-flaunting. I will have no truck with them.

But no worries: our University is not stupid enough to get rid of its police department. 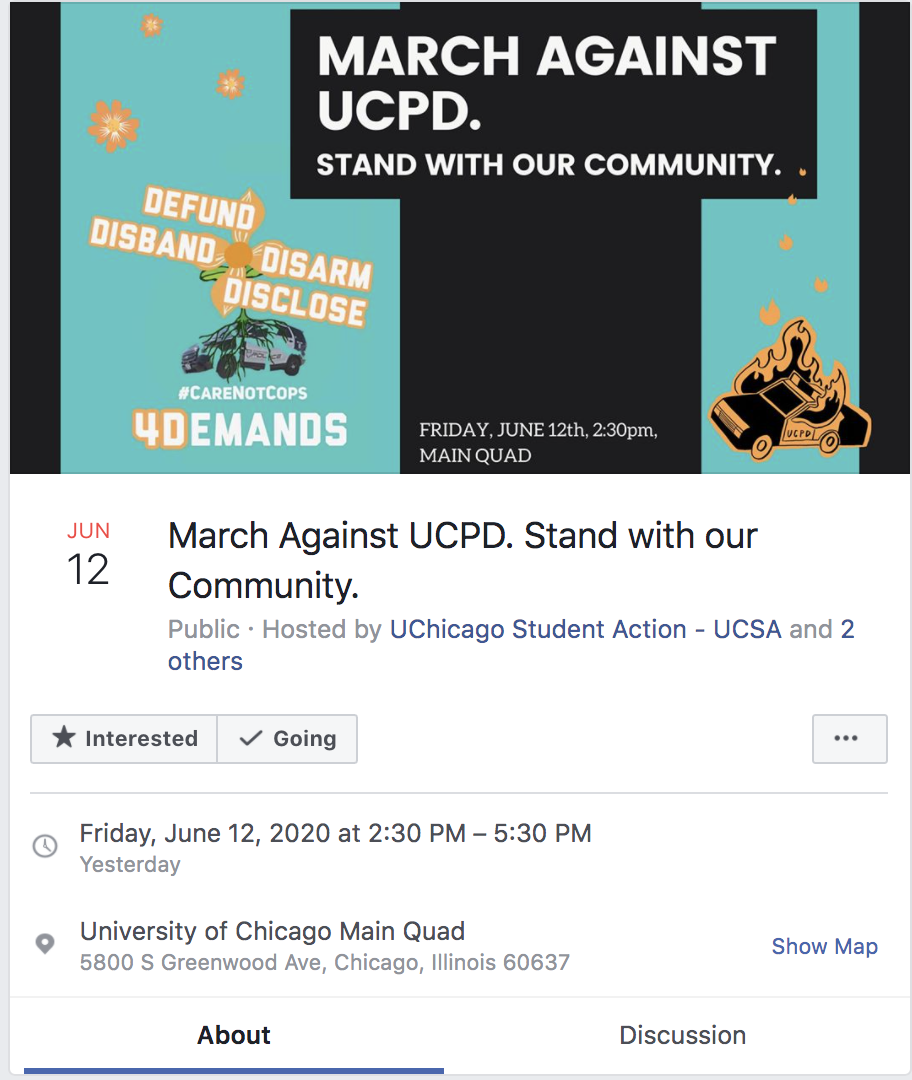 98 thoughts on “Calls to literally abolish the police”