In lieu of discussing politics or the pandemic, which are getting tedious and depressing, let’s talk about literature—or books in general.  This thread is about what we’re reading, and I like it because I’ve gotten many valuable tips from readers about things to read. This one came from my good friend Tim, who is a huge Flannery O’Connor fan. Besides knowing of her as a “Southern Gothic” writer, until recently I had never read a word she wrote. So before the University library closed, I went across the street and took out a couple of big fat books. One of them was The Collected Works of Flannery O’Connor from the Library of America; it contains all of her 32 short stories, her two novels (Wise Blood and The Violent Bear It Away), miscellaneous writings and nonfiction, and a comprehensive collection of her letters.

For some reason the book is expensive on Amazon ($53) but only $31.50 from the Library of America. 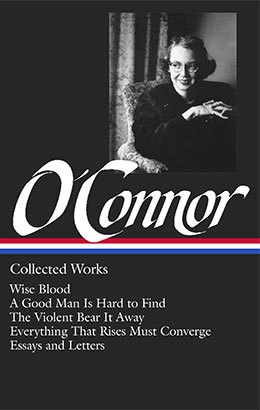 I’ve started with the short stories, and have read all but two. But though I intended to read them at my usual pace, found that I cannot take more than two per evening. That’s not because they’re bad, but because they’re good. She is a great prose craftsman, with nary a word wasted—in fact, she’s one of the best prose stylists I’ve seen in America, and that includes people like F. Scott Fitzgerald and Cormac McCarthy. Her prose isn’t lyrical like Fitz’s, or bizarre and sui generis like McCarthy’s, but it shows her to be a keen observer of detail and someone able to limn a scene so vividly that you can picture it entirely in your head, as if you’re standing in the room with the characters. I’m not sure how any fiction writer stores up this kind of detail, whether it involves saving in one’s memory what you’ve seen or simply making it up, but the craft is beyond me.

O’Connor, who died at only 39 of lupus, was a staunch Catholic: so staunch that she believed in the literal rather than metaphorical transubstantiation of a wafer.  And somehow, in a way I’ve not quite figured out, her stories are deeply theological.  All of them are tragic, and many involve someone who considers themselves upright and moral (they’re not), only to have their lives disrupted by an outsider, a disruption usually ending in tragedy, but sometimes an epiphany. Perhaps this says something about the unpredictability of life, the pride that goeth before a fall, or the dictum of Matthew that in future lives the first shall be last and the last first. Except that this happens not in the future life, but in this life.  There are also leitmotifs—the sun and moon, a row of trees at the edge of a wood—whose meanings elude me.

The sudden incursion of violence, which seems inevitable as the story proceeds and one gets more and more uncomfortable, is what makes me unable to read more than two stories, for I’m deeply unsettled after I’ve finished just one. But I also read her work slowly, something I don’t usually do, as each word, each description, must be savored.

There’s nothing in O’Connor’s life or background that suggests, at least to me, how she came to do what she did. Her life was somewhat constricted (she kissed a man only once), and yet she constructed in her head the most bizarre and diverse panoply of unimaginably strange characters and unthinkable events.  I regret that her early death prevented the creation of more work, but her legacy is secure with what she wrote—though I doubt that anybody reads her in English-literature classes any longer. For one thing, her stories are strewn with the n-word—common argot in her Southern environment—and that alone would eliminate them from most reading lists.

I’m sorry that I came upon O’Connor so late in life, for her work bears re-reading, and I’m only starting now. She belongs alongside Carson McCullers as one of the great Southern writers of our time. (And if you haven’t read McCullers’s The Member of the Wedding, The Ballad of the Sad Cafe, or The Heart is a Lonely Hunter, you’re really missing out.)

Your turn! And if you don’t mind, say why you like your book, as it helps me decide what I want to read in the future.