Yesterday I featured a provocative blogginheads.tv discussion with Glenn Loury and John McWhorter, both of whom issued some opinions that would be condemned as racist if coming from white people.

But one opinion, which is not that controversial but does have its critics, is that the violence and looting accompanying the George Floyd protests should be loudly and unequivocally condemned. Some like Kareem Abdul-Jabbar don’t approve of the violence, but find it “understandable” in a way that comes close to excusing it. Others—some on this website—have said that the violent incidents are few and overplayed in a way that overshadows the peaceful protests. We should, they imply, simply ignore the violence. Others argue that all the looting and physical assaults were not committed by “real” protestors, but by white supremacists, Antifa-ites, or simply greedy people.  I don’t accept that claim.

Now I’m not sure how many incidents of violence or looting or arson really took place, but minimizing them as infrequent (which they may well be) misses an important point: even if they are few, they will be seized on by the Right and even by the Middle as a way to condemn the Black Lives Matter movement. Even worse, they could, as Glenn Loury says in the Quillette article below and the podcast below that (click on screenshots to hear both), move people into the “Vote for Trump” column.  Perhaps you’ll say that that should not be the way it is, but it happens to be the way it is, and sociological research supports that.

During the peaceful marches from Selma to Montgomery in 1965 or the lunchcounter sit-ins—forms of peaceful civil disobedience (that’s a redundancy) that had an enormous salutary effect on securing civil rights—I can’t remember a single incident of violence by those following Dr. King’s program. True, there was violence by other wings of the civil-rights movement, but it was the purely peaceful nature of the publicized protests, and the violent police response to them, that gave America a shove in the right direction. Even one or two instances of publicized protestor violence could have set that movement back a lot.

Perhaps you’ll say that the media simply shouldn’t be broadcasting the violent events. But they are, after all, news, and we know the media’s mantra of “If it bleeds, it leads.” In view of that, it seems to me, as it seems to Loury, that we need to condemn the violence at the same time we promote the cause of anti-racism and equality. You can do both, you know.  And you don’t have to go along with the “defund the police” movement, either—not until it becomes clear exactly what is meant by “defund.” So yes, I stand with the peaceful protestors of racism that are marching in America. But I condemn the violence, and I want to see what the protestors intend to do about radically changing the police.  I’ll give a few quotes from Loury below the screenshot:

Loury, and I agree with this completely:

We have been here too many times before in recent years, and many of us have had quite enough. Crowds of angry Americans from every racial group and all walks of life have spilled into the streets, vociferously protesting this instance of racial injustice and police brutality. The protests are not merely the legitimate exercise of constitutional rights to assemble and to petition our government—they are essential for sustaining the moral health of our democracy. Protestors—the vast majority of whom have gathered peacefully to make their voices heard—render a vital public service with their insistent demands for change. Their anger is fully justified. Their impatience is entirely understandable. They must not be ignored.

But not all protests have been peaceful and not every protestor has behaved righteously. In cities across our country we have witnessed, often in real time, violent attacks on the police, looting of commercial outlets, and torching of the property of innocent bystanders. That is, some of the protests have descended into riots. This rioting is also contemptible, and it, too, demands our unreserved condemnation.

. . . To condemn the rioting—which I believe to be a moral and political imperative—is not at all the same thing as opposing the protests. Many observers have been reluctant to do the former because they wish to avoid the latter. I maintain that this is a grave mistake. On the contrary, sympathy for the protesters’ reform agenda would seem to require condemning the nefarious deeds of looters and arsonists. For the rioting plays right into the hands of those political forces that are least sympathetic to the interests of poor communities of color. Mark my words: The violence from these protests will, if it persists, provoke a vicious backlash. It will discourage people from viewing the plight of the minority poor with compassion and understanding.

. . . Americans are in a very dangerous situation now. We stand on the brink of a widespread epidemic of civil unrest whose ultimate consequences are difficult to reckon. All it may take is just one political assassination; one mistaken shot fired by a nervous, frightened young National Guardsman confronting a raucous mob; one enraged immigrant shopkeeper who guns down a black youngster trying to loot his store; for all hell to break loose. The dry tinder lies at hand, needing only a spark to start a conflagration. There are opportunists in our midst who would hope this might be so. Which is why I insist that progressive intellectuals who make excuses for street violence, even in the face of the awful killing of George Floyd, are making a monumental moral and political error.

Below is a sixteen-minute Quillette podcast in which Loury is interviewed by Quillette editor Jonathan Kay (there’s an ad for Magic Spoon cereal in the middle). The topics are wide ranging, and overlap considerably with those on yesterday’s podcast. They include the “birding while black” incident in Central Park, and Loury (and McWhorter’s) conception of antiracism as a “religion”.

Loury once again strongly opposes big changes in police departments that would reduce their ability to fight crime, saying that that is imposing a system on people that “denudes them of protection from the police.” He said that the defunding doesn’t solve the problem of maintaining order, for the wealthy will simply hire their own police-equivalents, and others will take matters into their own hands—vigilante justice. As Loury says, “It’s madness.”

Loury discusses how antifa’s interests are orthogonal to those of black protestors, and that, as he argues above, looting and rioting “solve Trump’s reelection problem for him.” He’s not sure if the violence will be enough to push Trump to victory, but thinks, as do I, that it gives it a strong shove. In fact, despite Trump’s mishandling of the pandemic, his “strong man” stand on protestors seems to be a pivotal factor affecting his support.

As Loury notes, he held his nose and watched Tucker Carlson on FOX news, saying that Carlson showed an hourlong montage of black kids looting during the protests and mobs beating store owners with two by fours.  Without agreeing with this characterization, Loury says many Americans will be thinking, when they see these videos, that “this is barbarism”.  He says that many Americans simply don’t understand that “this is a conservative country.”

Finally, the discussion finishes off with Tom Cotton’s New York Times editorial calling for bringing the military into U.S. cities to monitor the protests and control any rioting. Loury mocks the NYT staff for opposing the editorial’s publication, claiming that they felt “personally unsafe” by its publication. Loury avers that the staffers were acting as if this were 1933 or 1938. And he mocks the 1619 project in passing. 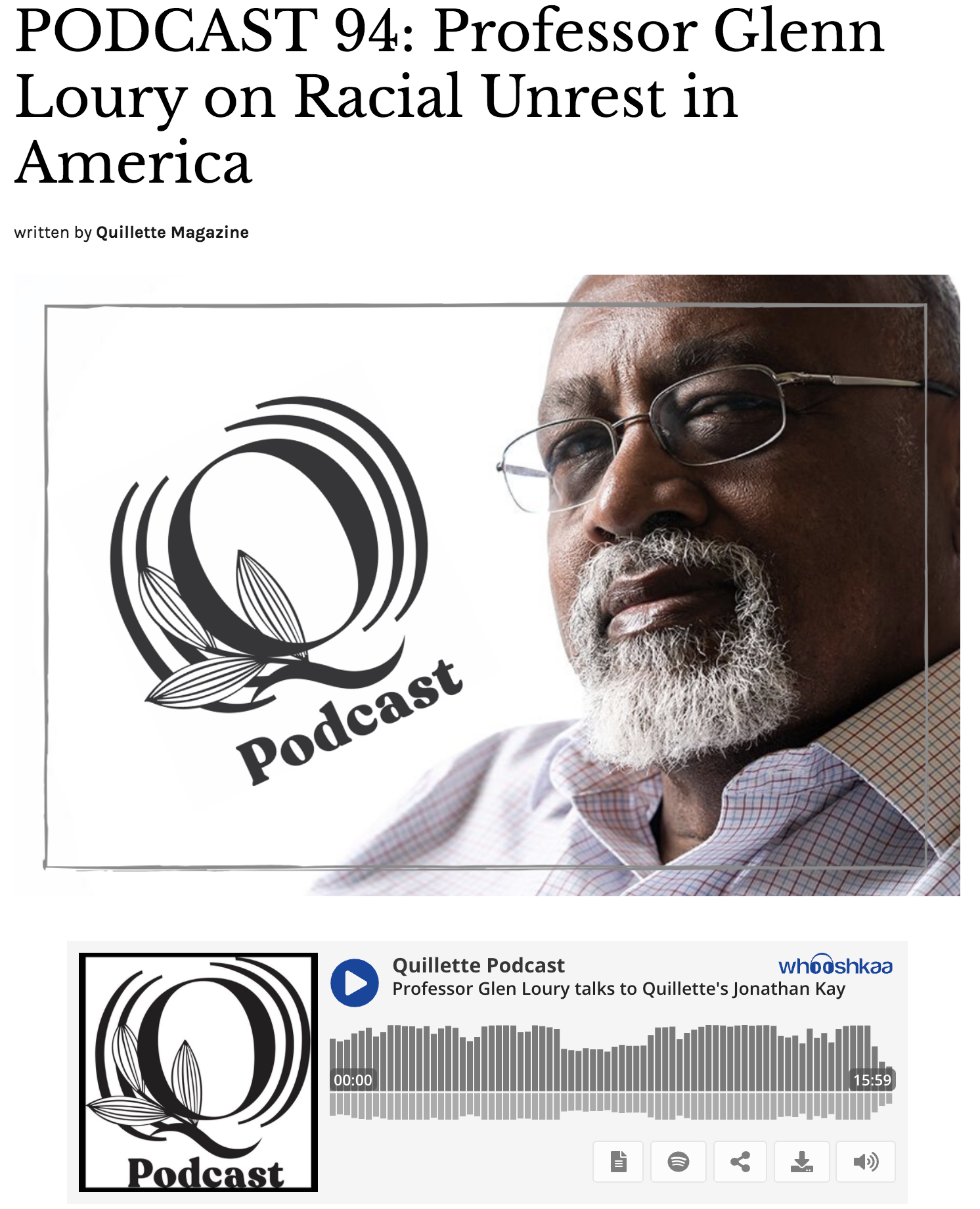 48 thoughts on “Glenn Loury: A Quillette piece and a Quillette podcast”