Skip to content
You probably read about Republican Senator Tom Cotton’s June 3 op-ed in the New York Times, urging the President to send the military into cities with protests and riots inspired by police brutality against blacks. It caused a huge fracas at the paper, with the editor first defending it and then, after social-media pressure and a “virtual walkout” by Times staffers, saying that it shouldn’t have been published, among other things, because it put “Black@nytimes staffers in danger”.

You can read Cotton’s piece by clicking on the screenshot below (for some reason, the paper has made it impossible to put up a screenshot by simply inserting the URL of this op-ed). 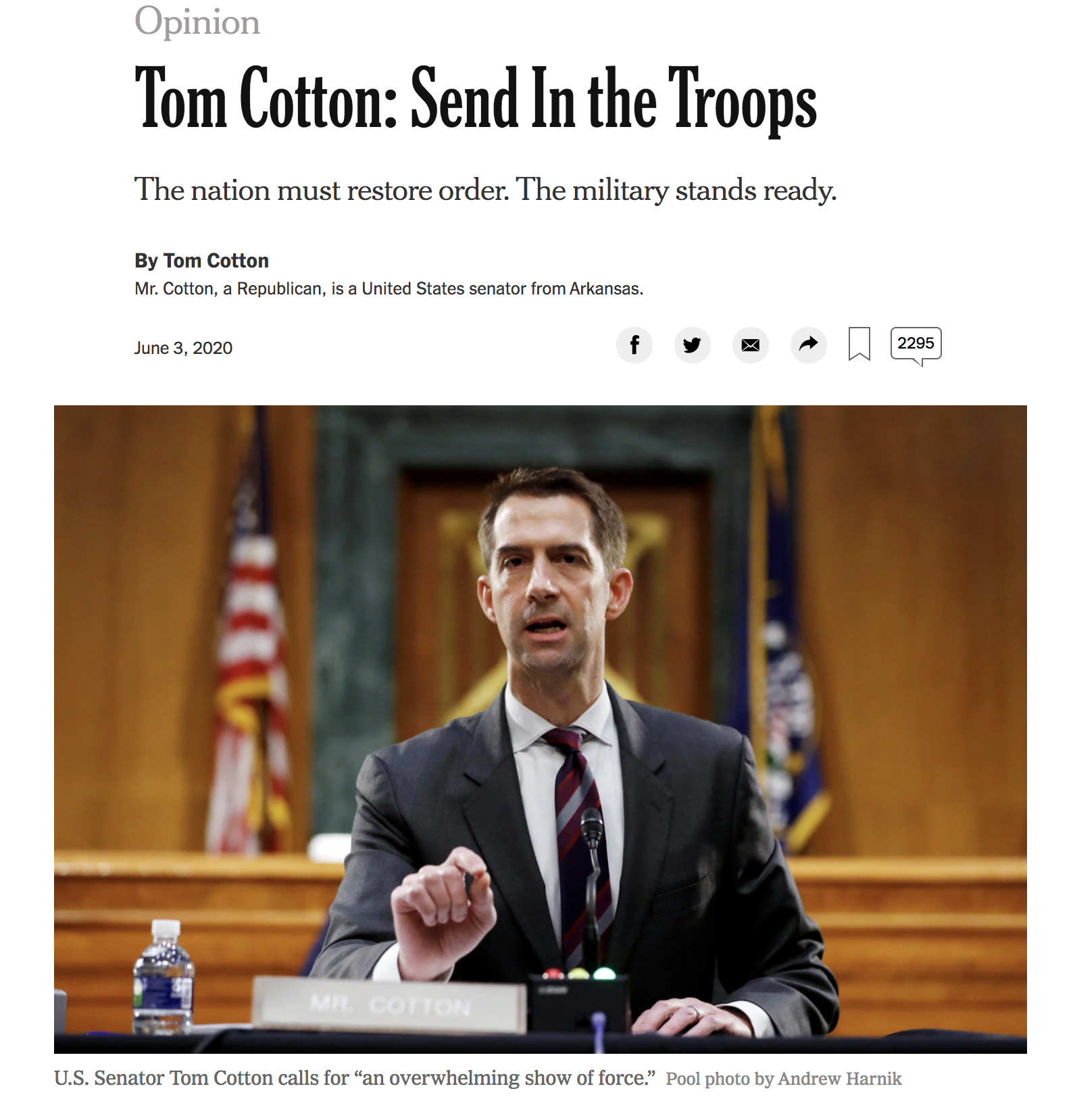 The op-ed is preceded by a longish disclaimer by the paper, which I hear has decided not to run Cotton’s op-ed in the paper edition. Here’s the disclaimer:

After publication, this essay met strong criticism from many readers (and many Times colleagues), prompting editors to review the piece and the editing process. Based on that review, we have concluded that the essay fell short of our standards and should not have been published.

The basic arguments advanced by Senator Cotton — however objectionable people may find them — represent a newsworthy part of the current debate. But given the life-and-death importance of the topic, the senator’s influential position and the gravity of the steps he advocates, the essay should have undergone the highest level of scrutiny. Instead, the editing process was rushed and flawed, and senior editors were not sufficiently involved. While Senator Cotton and his staff cooperated fully in our editing process, the Op-Ed should have been subject to further substantial revisions — as is frequently the case with such essays — or rejected.

For example, the published piece presents as facts assertions about the role of “cadres of left-wing radicals like antifa”; in fact, those allegations have not been substantiated and have been widely questioned. Editors should have sought further corroboration of those assertions, or removed them from the piece. The assertion that police officers “bore the brunt” of the violence is an overstatement that should have been challenged. The essay also includes a reference to a “constitutional duty” that was intended as a paraphrase; it should not have been rendered as a quotation.

Beyond those factual questions, the tone of the essay in places is needlessly harsh and falls short of the thoughtful approach that advances useful debate. Editors should have offered suggestions to address those problems. The headline — which was written by The Times, not Senator Cotton — was incendiary and should not have been used.

Finally, we failed to offer appropriate additional context — either in the text or the presentation — that could have helped readers place Senator Cotton’s views within a larger framework of debate.

Well, I could note a few Left-wing op-eds that could have used factual vetting as well, but they didn’t get it, and you know why. At any rate, the main objection by Times staffers were not these quibbles about wording, but about their claim that this editorial calls for the incursion of the military to put down riots, which supposedly demonizes all black Americans and puts them (and the Times staffers) in danger.

But if you read Cotton’s piece, which I disagree with in toto, what you find is no mention of black people, but of the need to get the military into cities to put down violence. In fact, it even draws a distinction between peaceful and violent protest:

Agreed. But sending in the military is a no-go. The National Guard, to which Cotton alludes repeatedly, was sent to states that had earlier protests, like Mississippi during the Civil Rights movement of the Sixties. But the National Guard is not the regular military, for the NG also has a civilian function—keeping the peace in society—which the regular military does not. The regular military has objected to being used in this way, and it shouldn’t, especially in this case where it is not only unneeded, but would throw oil on the fires.

Cotton’s views reflect the Republican law-and-order stance, and although it doesn’t mention blacks, one (or at least I) can sense that there’s a frisson of fascism here: wanting to sic the big guns on black people to keep them in their place.

There’s no doubt that Cotton is bawling up a drainpipe here, for there’s zero chance that the military will be called into U.S. cities to quell riots. In that sense, the fear of black Times staffers is completely unwarranted: they are not rendered unsafe by a few unwise words from a Senator writing in the paper. What they really object to, I think, is that Cotton expressed an opinion they don’t agree with. And if you can say that such opinions put you in danger, you gain some moral high ground. (Not to mention that if this was literally true, Cotton’s editorial would violate the First Amendment.) Given that the Times caved not only to its staffers but to some big pushback from social media, we can expect to see fewer conservative op-eds in the paper in the future. Here’s a statement about the virtual walk-out:

I am engaging in a virtual walk out from @nytimes today with 300+ other non-editorial coworkers in solidarity with our Black colleagues ✊🏽 pic.twitter.com/X3O5YQucuR

Columnist Bari Weiss has also been demonized in this fracas, as she put out a series of tweets noting an ideological and journalistic divide between the older and younger staffers. (As I predicted, the wokeness on college campuses will invade journalism as college students move into media jobs.) Here are a few of her tweets, which got the regular news staff riled up—even though she thought Cotton’s piece might not be worth publishing—to the extent that some called for her firing. (Op-ed writers are allowed to write about NYT dynamics on Twitter, while regular news staff aren’t.):

Finally, VICE published a partial transcript of a virtual “town hall” meeting between Time Publisher A. G. Sulzberger, Executive editor Dan Baquet, and Chief Operating officer Meredith Levien, in which they fielded questions from the paper’s staff. Click on screenshot to read it if you want to read a transcript and some background:

Here’s a question from a Times staffer laying out the main objections to Cotton’s editorial:

“We would presumably not submit to publishing op-eds advancing theories of Holocaust denial or advocating a resumption of slavery, on the grounds that these are not reasonable positions for the debate, but rather hateful notions that we can safely condemn without worrying about being accused of partisanship or closed mindedness. But in publishing the Tom Cotton piece, haven’t we effectively validated depictions of Black Americans as terrorists in exercising their First Amendment rights to protest police brutality? Haven’t we applied the imprimatur of the Times to rule that unleashing the military on this movement is a reasonable position for the debate? Doesn’t that undermine that our mission is to be a force for good in American democracy? And do we really believe that we are airing out genuinely important views, as opposed to seeking to expand our business by catering to alternate political persuasions?”

Well, whatever Cotton thinks of blacks, I don’t think the editorial explicitly characterizes them as terrorists. After all, he does draw a distinction between peaceful and violent protest. And no, the Times did not apply its “imprimatur” to the op-ed; it just published it. In the end, I think it was valuable to hear from at least one Republican to see how they can justify using the military to put down riots. It did not show that the paper approved of the editorial (in fact, it bent over backwards, lashing its back with barbed wire, to show that it didn’t), nor did the editorial in any conceivable way endanger the black staffers on the New York Times.

Should the paper have agreed to publish the editorial in the first place? I think so, as it gives us insight into a Republican mind and also “outs” a senator for what he thinks. But that’s a judgement call. Still, once the piece was accepted, I don’t think the Times should have furiously back-pedaled about it, or appended a foreword saying it shouldn’t have been published and didn’t meet the paper’s standards. They did that, of course, because they’re woke and want us to know it. They wouldn’t do it with a Left-wing op-ed of equal weakness, and I call that hypocritical.

Op-ed sections are supposed to be full of pieces that rile you up, making you mad—and perhaps making you think. If the Times is giving more scrutiny to op-eds from the Right, and is more willing to annotate them or leave them out of the paper paper, then the Times is not fulfilling its responsibility. Maybe we’ll be left with one token conservative columnist: Ross Douthat.

First the Times does this, and earlier the New Yorker was cowardly in canceling Steve Bannon’s scheduled appearance at the New Yorker Festival. And now, perhaps, New York Magazine may be censoring Andrew Sullivan’s columns. Do I have to unsubscribe to every form of media that has “New York” in the title?

47 thoughts on “The fracas about Tom Cotton’s op-ed in The New York Times: should it have been published?”