As you know, last week Donald Trump asserted that he was taking hydroxychloroquine as a preventive for coronavirus, said that thousands of front-line medical workers were also taking it for the same reason, and argued that the drug had proved efficacious against the virus.  Yesterday I thought that all three claims might be lies (the first two certainly are), but now the president’s physician, Sean Conley, has weighed in saying that the Prez is indeed dosing himself with the nostrum, and on Conley’s advice.

It turns out that Sean Conley is an osteopath, as outlined in this Guardian article (click to read the screenshot). Here are his credentials:

Here’s the letter testifying to Trump’s use of the drug on the advice of Conley: 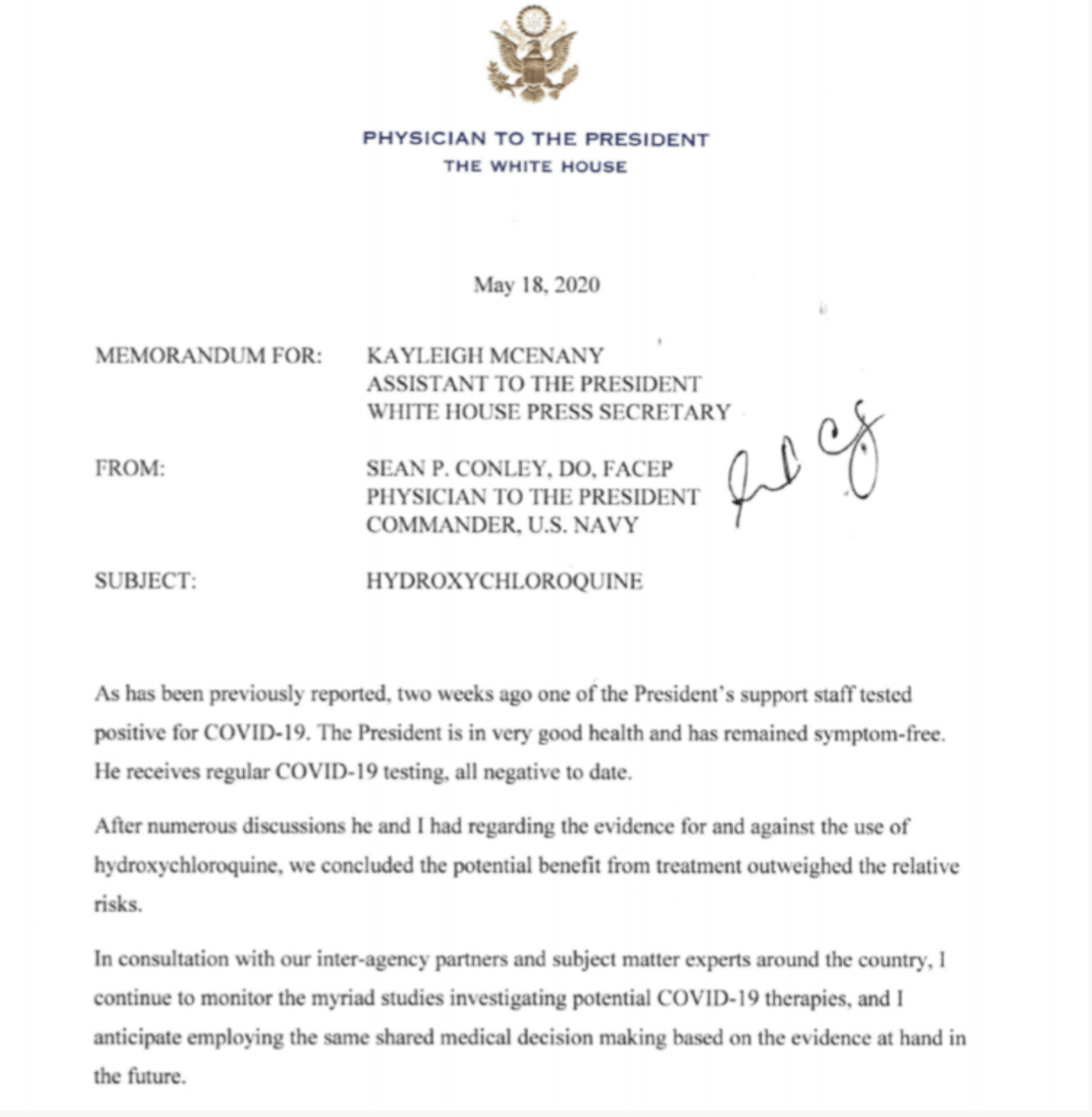 Now I’m not going to say that Conley is a quack just because he’s a DO rather than an MD, though it is odd. Many osteopaths have training nearly identical to that of MDs, and some, I’ve heard, are fine physicians. But this one isn’t.

For Conley is violating the first part of the Hippocratic Oath (well, the revised version of that oath): “First do no harm.” And that’s the problem with hydroxychloroquine: it’s not only not efficacious against coronavirus, but it can be dangerous, causing heart problems, hallucinations, paranoia, and other “neuropsychiatric symptoms” (see article below), which gives one pause.

And Trump isn’t exactly the picture of health. According to the Guardian, he weighs around 239 pounds, just at the threshold of being “obese” (not “morbidly obese”, though, as Nancy Pelosi stated), sleeps 4-5 hours per night, eats a lot of junk food (especially from McDonald’s), and gets no exercise save golf (he probably uses a cart).

Only a fool, I think, would prescribe a useless drug that could be dangerous for someone in Trump’s condition—indeed, for someone in any condition.  Conley is not practicing evidence-based medicine, and in behaving this way is endangering his only patient. But give Trump some “credit”, too, for he knows the stuff doesn’t work and is still taking it—perhaps to reassure Americans that there can be a preventive. As Trump argued, “What do you have to lose?” My answer, “Your life, fool!” Conley’s claim in the letter that “the potential benefit from treatment outweighed the relative risks” is pure cant—in fact, the statement cannot possibly be true based on the data we have.

The FDA itself has declared that hydroxychloroquine “has not been shown to be safe and effective”. What on earth is Trump’s doctor doing?

At any rate, the article below from Just Security (click on screenshot), ends with 9 questions for “Dr.” Conley.

Yes, it would be good if Conley answered those questions, but he won’t. Here are four of them:

4. What is the complete medical record of Donald Trump that might put him at risk of dangerous side effects in taking the drug? More specifically, does Trump have any history of heart trouble or disease, or any other medical condition that would make it dangerous for him to take this drug?

5. Conley’s memo states: “After numerous discussions…we concluded the potential benefit from the treatment outweighed the relative risks.” The use of “we” in this sentence is notable. Is Dr. Conley saying that he would not have recommended use of the drug? In other words, is Dr. Conley hiding that Trump’s views outweighed the physician’s sound medical advice of the risks? Why did it take numerous discussions?

6. If it is true that Trump is taking this drug, why has Dr. Conley knowingly prescribed a drug that the FDA and other authorities have determined is potentially fatal, and, moreover, whose beneficial effects on treating COVID-19 are unproven? Why has Dr. Conley prescribed a drug possibly risking the life of the president and in violation of FDA guidelines, medical standards, ethics, and professionalism?

9. Medical researchers have concluded that hydroxychloroquine may cause neuropsychiatric symptoms, “including agitation, insomnia, confusion, mania, hallucinations, paranoia, depression, catatonia, psychosis, and suicidal ideation.” Has Dr. Conley properly assessed his patient, President Trump, for his susceptibility to these symptoms? Since Trump has been taking the drug has Dr. Conley observed that it has produced or exacerbated any of these symptoms in President Trump?

I know that some people will be wishing for Trump’s demise from this drug (you can see it among the usual-suspect bloggers). I don’t wish for anyone’s demise, though I want Trump to be defeated in November. But by putting his imprimatur on the use of hydroxychloroquine to prevent Covid-19 infection, Conley is setting a terrible example not just for those worried about the virus, but for anyone who has confidence in modern medicine.

122 thoughts on “Trump’s doctor, an osteopath, approved his patient’s use of hydroxychloroquine. That’s quackery, regardless of the doctor’s credentials.”