You’ve probably heard of at least several authors of this new Politico piece, which I suspect but don’t know for sure was submitted to (and rejected by) the New York Times after the paper retroactively redacted a column by Bret Stephens on the overrepresentation of Ashkenazi Jews “in intellectual and creative fields”. The article by Paresky et al. is a severe indictment of the Times‘s policies, which now include giving in to an “outrage mob” and changing a column (as well as removing genuine facts), without leaving a record of the changes. Truly, the New York Times under its relatively new management (wokemeister A. G. Sulzberger) is going down the tubes—fast.

You probably know of Jon Haidt and Steve Pinker, whom I’ve written about often, and have likely heard of Nadine Strossen (former head of the ACLU and now a Professor of Law Emerita at New York Law school) and of the first author, Pamela Paresky, who writes for Psychology Today and lectures at my own university. These are not slouches, and they’re rightfully pissed off. The only one I know here is Pinker, but it takes a lot to make him append his name to a piece like this. He musters and dispenses his anger carefully and infrequently.

Click on the screenshot below to read, and to weep at how far the New York Times has fallen. Truly, even the dubious 1619 Project pales before how they treated this column by Bret Stephens. 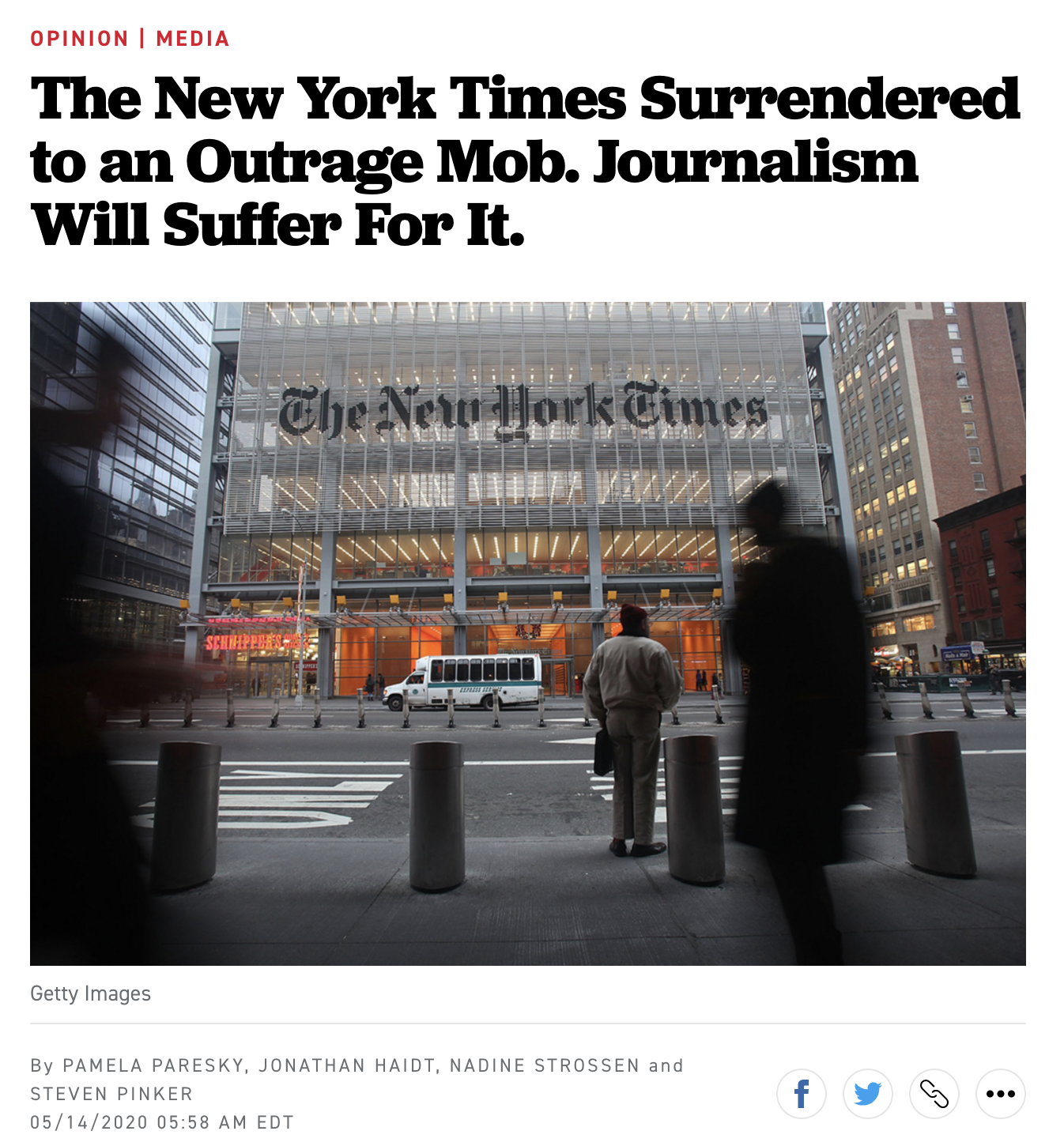 Here’s the column, which has been changed with the redacted passages completely gone. Instead, there’s a note at the top that says this:

An earlier version of this Bret Stephens column quoted statistics from a 2005 paper that advanced a genetic hypothesis for the basis of intelligence among Ashkenazi Jews. After publication Mr. Stephens and his editors learned that one of the paper’s authors, who died in 2016, promoted racist views. Mr. Stephens was not endorsing the study or its authors’ views, but it was a mistake to cite it uncritically. The effect was to leave an impression with many readers that Mr. Stephens was arguing that Jews are genetically superior. That was not his intent. He went on instead to argue that culture and history are crucial factors in Jewish achievements and that, as he put it, “At its best, the West can honor the principle of racial, religious and ethnic pluralism not as a grudging accommodation to strangers but as an affirmation of its own diverse identity. In that sense, what makes Jews special is that they aren’t. They are representational.” We have removed reference to the study from the column.

Note that the sin of Stephens’s column was not being racist or giving erroneous facts. Rather, he cited a paper “uncritically” when one of its authors had make racist statements. And Stephens’s intent—the cultural hypothesis—was apparently already clear in the original paper. The apology here is not from Stephens, but from the paper to those readers outraged that Stephens’s column would cite a paper partly written by an author who said racist things and dared imply that creative and intelligence of Ashkenazi Jews might have a genetic basis. (Saying something like that is, of course, verboten.) And you can’t even check for yourself, for the paper has removed any reference to the study. (The link isn’t in the Paresky et al. article either, but you can find the paper, published in the Journal of Biosocial Science, for free here.) 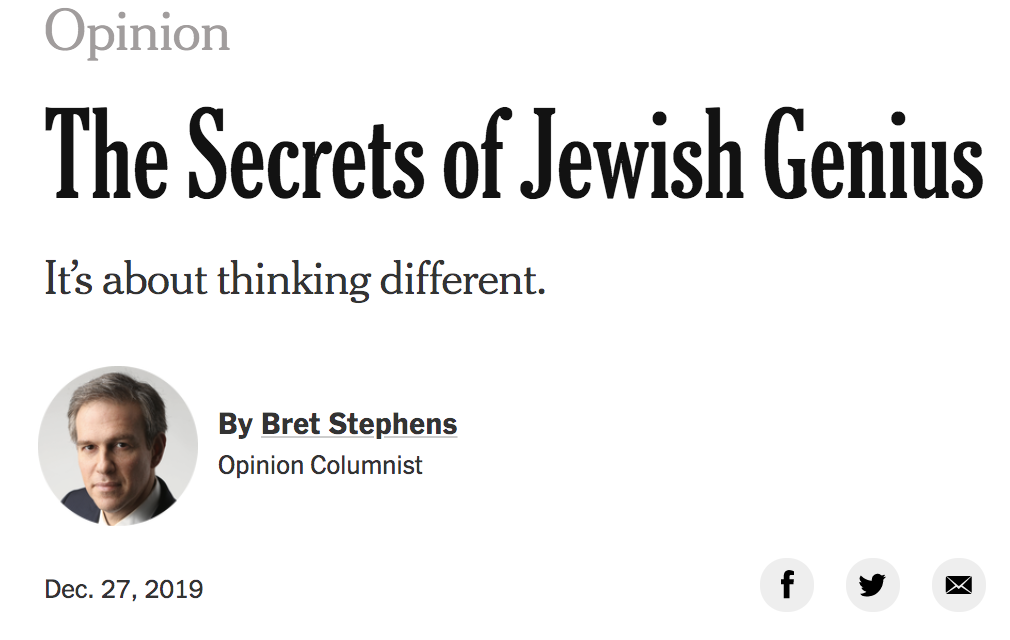 The original Stephens column cited a peer-reviewed study that advanced the hypothesis that Ashkenazi Jews had a complement of genes that led in part to their high achievement and intelligence. Stephens didn’t accept the genetic explanation, and, in his column, apparently advanced an alternative cultural hypothesis. (I have no dog in this fight and have followed neither the data nor the controversy).

What happened is that social media discovered that one of the authors of the paper had expressed racist views. Stephens neither parroted them nor mentioned that, nor did he even allude to eugenics. But of course that’s not good enough for social media: the fact that one author did express racist views discredits, in the mind of Outrage Culture, not just the original paper, but Stephens’s column as well. Business Insider writes that Stephens’s original column led to canceled subscriptions.

Paresky et al note that the appropriate response of the NYT would have been this:

. . . . to acknowledge the controversy, to publish one or more replies, and to allow Stephens and his critics to clarify the issues. Instead, the editors deleted parts of the column—not because anything in it had been shown to be factually incorrect but because it had become controversial.

But the Times didn’t follow that path—not at all. Instead, they took it upon themselves to change what Stephens wrote. That’s censorship. (Note: the alterations are attributed to the paper’s editors —”we”—not to Stephens.) To continue with Paresky et al.:

Instead, the editors deleted parts of the column—not because anything in it had been shown to be factually incorrect but because it had become controversial.

Worse, the explanation for the deletions in the Editors’ Note was not accurate about the edits the paper made after publication. The editors did not just remove “reference to the study.” They expurgated the article’s original subtitle (which explicitly stated “It’s not about having higher IQs”), two mentions of Jewish IQs, and a list of statistics about Jewish accomplishment: “During the 20th century, [Ashkenazi Jews] made up about 3 percent of the U.S. population but won 27 percent of the U.S. Nobel science prizes and 25 percent of the ACM Turing awards. They account for more than half of world chess champions.” These statistics about Jewish accomplishments were quoted directly from the study, but they originated in other studies. So, even if the Times editors wanted to disavow the paper Stephens referenced, the newspaper could have replaced the passage with quotes from the original sources.

The authors wind up listing three “pernicious precedents for American journalism” caused by the Times’s handling of this piece.  Rather than paraphrase them, I’ll just quote from them:

First, while we cannot know what drove the editors’ decision, the outward appearance is that they surrendered to an outrage mob, in the process giving an imprimatur of legitimacy to the false and ad hominem attacks against Stephens. The Editors’ Note explains that Stephens “was not endorsing the study or its authors’ views,” and that it was not his intent to “leave an impression with many readers that [he] was arguing that Jews are genetically superior.” The combination of the explanation and the post-publication revision implied that such an impression was reasonable. It was not.

Unless the Times reverses course, we can expect to see more such mobs, more retractions, and also preemptive rejections from editors fearful of having to make such retractions.

. . .  Second, the Times redacted a published essay based on concerns about retroactive moral pollution, not about accuracy. While it is true that an author of the paper Stephens mentioned, the late anthropologist Henry Harpending, made some deplorable racist remarks, that does not mean that every point in every paper he ever coauthored must be deemed radioactive. Facts and arguments must be evaluated on their content. Will the Times and other newspapers now monitor the speech of scientists and scholars and censor articles that cite any of them who, years later, say something offensive? Will it crowdsource that job to Twitter and then redact its online editions whenever anyone quoted in the Times is later “canceled”?

Third, for the Times to “disappear” passages of a published article into an inaccessible memory hole is an Orwellian act that, thanks to the newspaper’s actions, might now be seen as acceptable journalistic practice. It is all the worse when the editors’ published account of what they deleted is itself inaccurate. This does a disservice to readers, historians and journalists, who are left unable to determine for themselves what the controversy was about, and to Stephens, who is left unable to defend himself against readers’ worst suspicions.

In other words, what the paper did makes it look like Stephens somehow transgressed, and thus was given a spanking in words by the editor.

This is all part and parcel not only of the Times‘s increasing wokeness, evidenced in its 1619 Project, in its fairly blatant favoring of pro-Palestinian over pro-Jewish news (remember the long article about the stray bullet, implying that Israeli soldiers murdered a Palestinian medical aid worker?), and now in an unbelievable act of post facto censorship without letting us see what was censored.

The ‘erasing’ or demonization of a person, or in this case a paper, because some of the views expressed by an author were racist, is classical behavior of the Control Left. First it’s Gandhi, then Galton, then Thomas Jefferson, and who will be next? And apparently we also need to remove facts that are indisputable because someone who had racist views expressed them! Should we redact the Declaration of Independence because Jefferson owned slaves?

Well, the Times is already trying to rewrite American history with the 1619 Project, which, unbelievably, got a Pulitzer Prize. Even those who like the Project—and its aims are admirable—should deplore its misrepresentation of fact and of history to accomplish an ideological end. (Sadly, some people, even here, will swallow the means of distortion if the ends are antiracist). But such misrepresentation could also be considered “moral pollution,” for it’s bending the truth—and a paper like the New York Times cannot afford to bend the truth, or, in this case, expunge the truth. That’s truly Orwellian; remember what Winston Smith did for a living?

It’s a pity that four distinguished authors had to correct the paper’s missteps in an article in Politico, rather than in the paper itself.