I’ve had a few interesting sightings of late and none more so than the entomopathogenic [insect and arachnid-killing] fungi I’ve found on insects and spiders.

The first two shots are of Beauveria sp. probably Beauveria bassiana commonly called Icing Sugar Fungus. In this case it has infected a Robber Fly of the genus Ommatius. 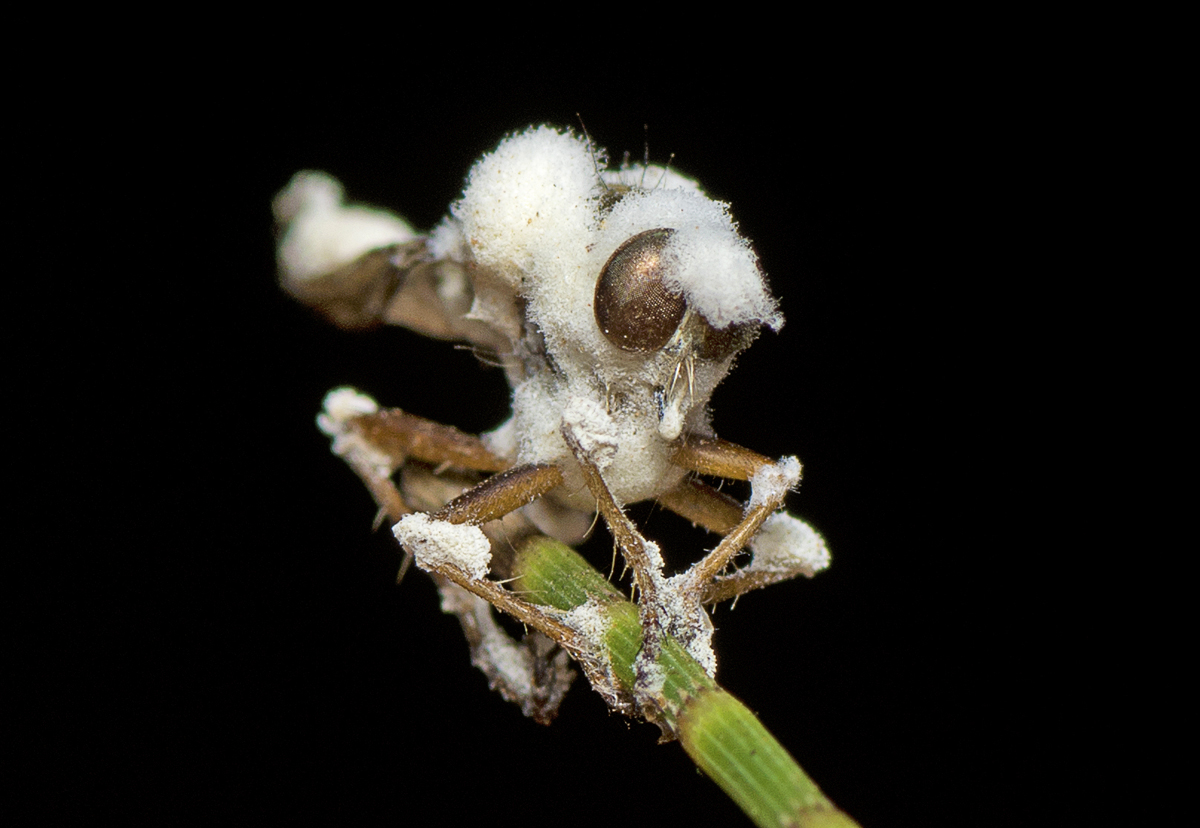 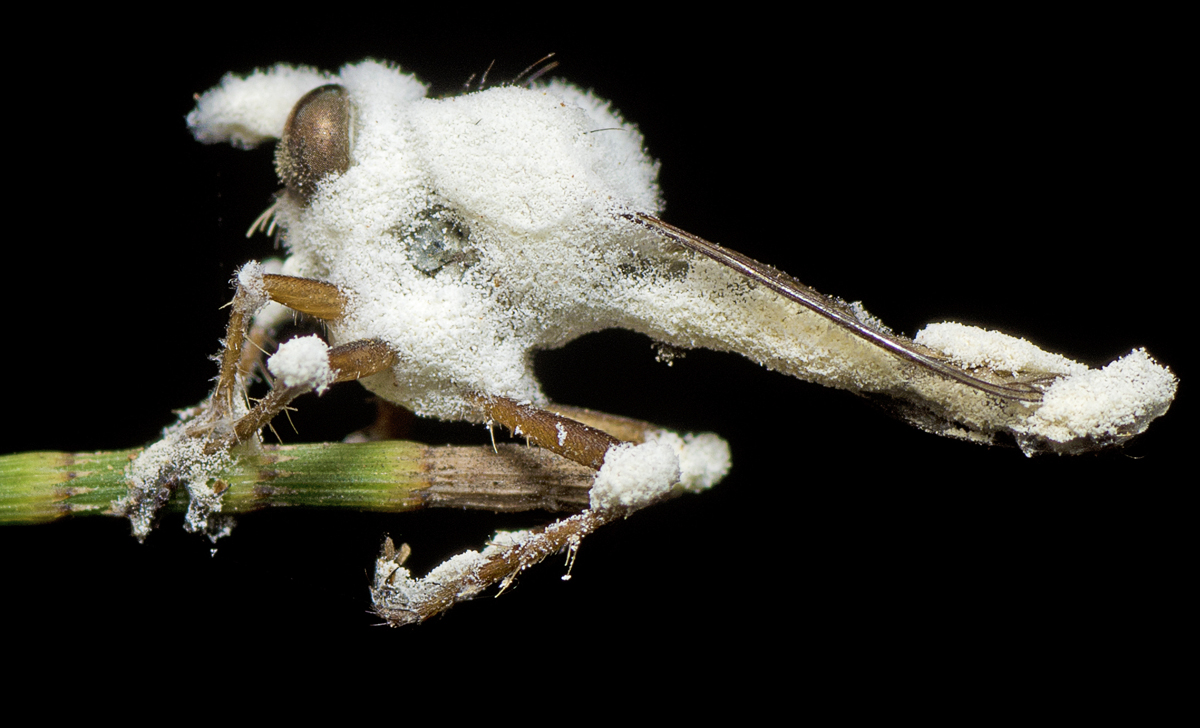 Now the interesting thing about classifying fungi is that many have a sexual form and an asexual form, and these are so different that they have been classified as separate genera in the past. So Beauveria bassiana is the anamorph (asexually reproducing form) of Cordyceps bassiana, which is known as the teleomorph or sexually reproducing form. Both together are known as the holomorph. After 1 January 2013, one fungus can only have one legitimate name. Looking at this paper, one sees that while both Beauveria and Cordyceps are legitimate genera, for this species Beauveria bassiana would be the legitimate name.

With the next one this is a species that targets spiders. The anamorphic type Gibellula is the accepted name and the former name Torrubiella for teleomorphic forms has been deprecated.

The photos are of a small spider consumed by Gibellula cf arachnophila showing the fruiting bodies. The second is of an Arkys lancearius infected with an early stage of Gibellula and after that we see the small yellow sexual form of Gibellula cf arachnophila, formerly classified as Torrubiella sp. I collected the Arkys and have it at home in test tube in the hope it will produce fruiting bodies for me to photograph. 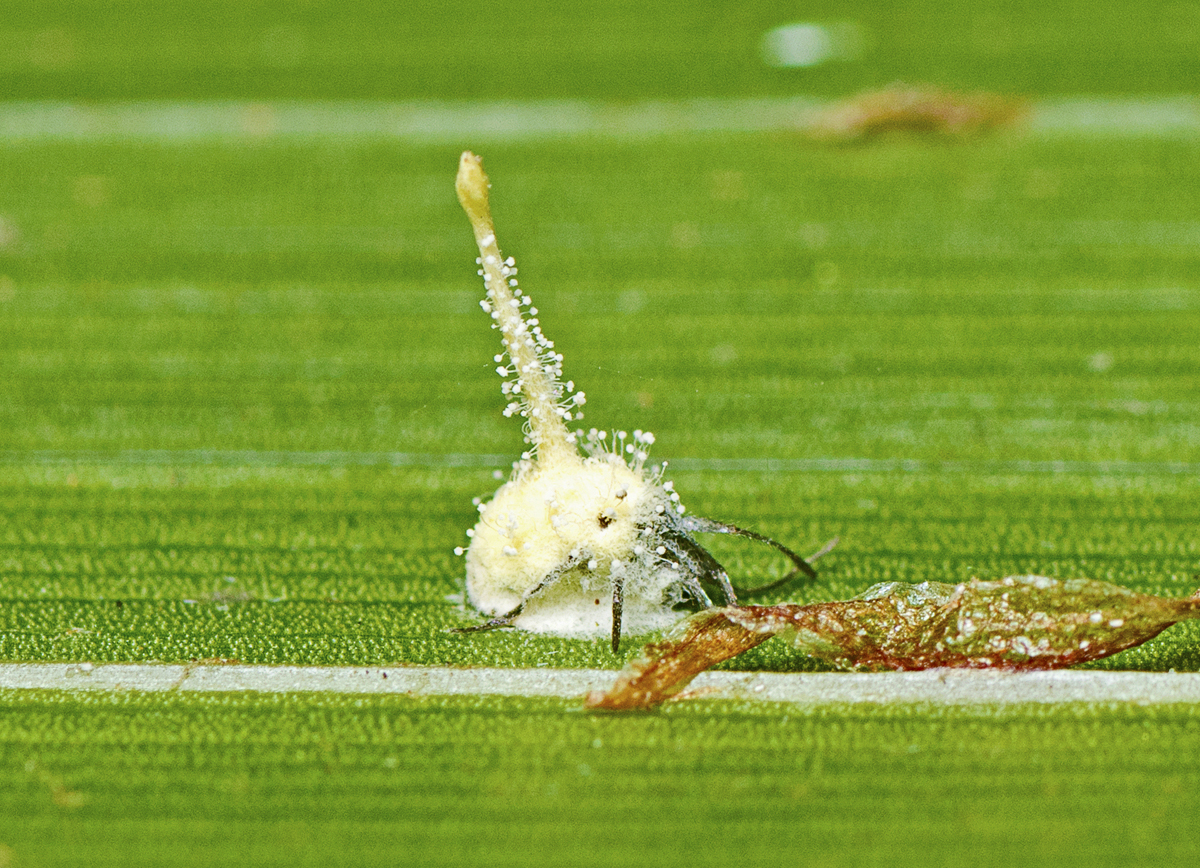 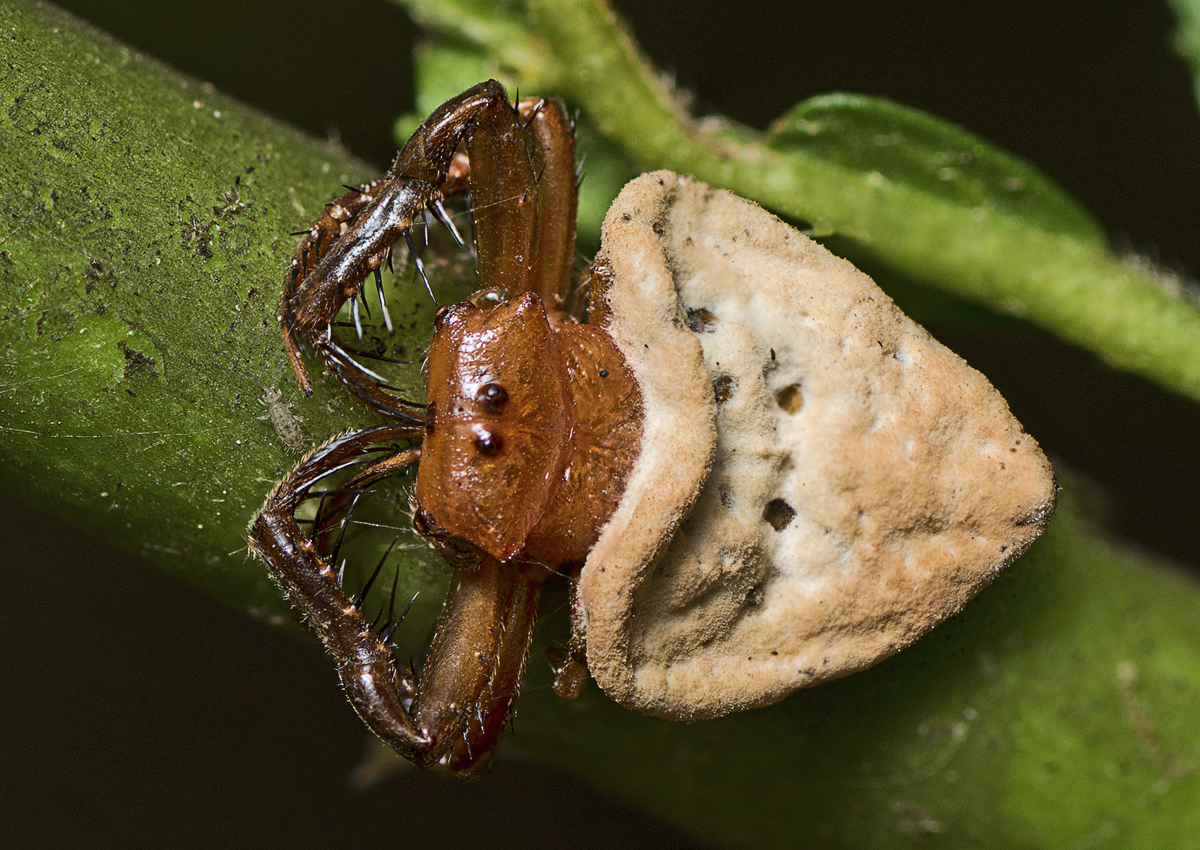 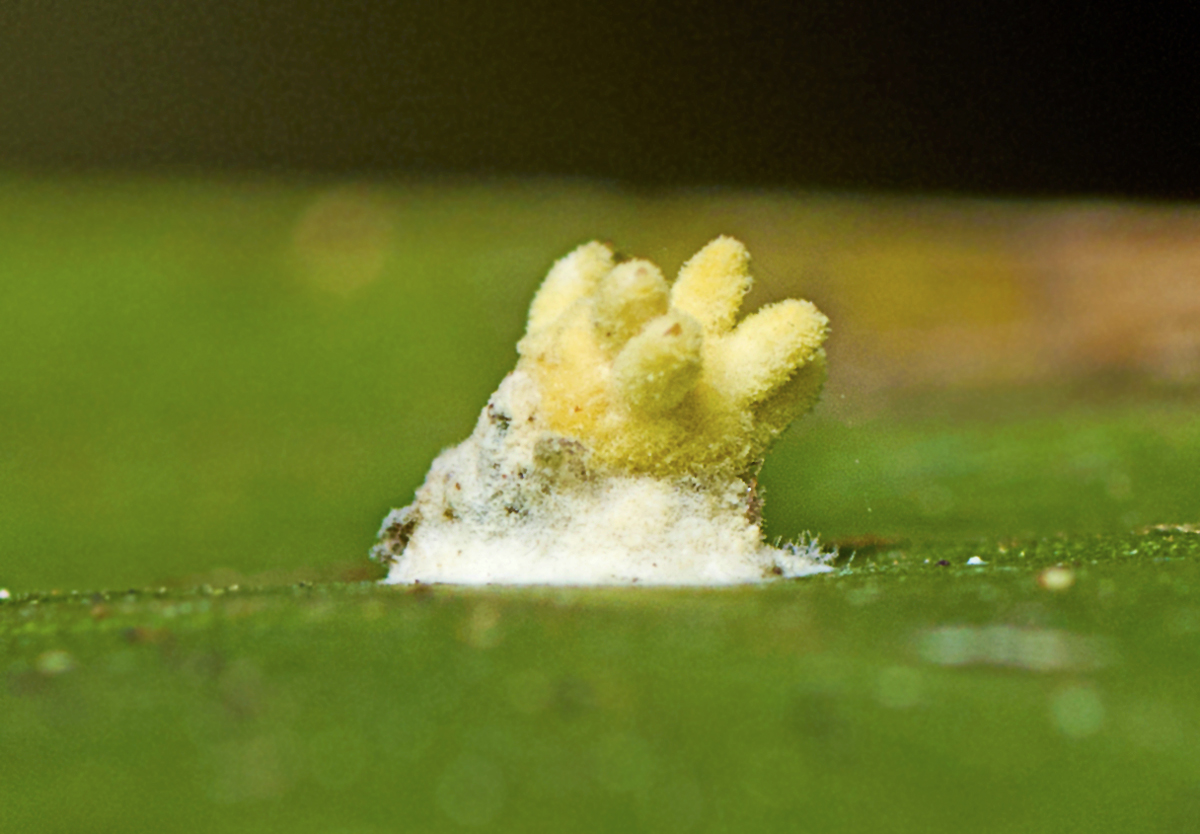 Last, I have an unfortunate caterpillar that has been killed by Metarhizium rileyi, another entomopathogenic fungus that is being actively investigated for its ability to kill a wide range of Lepidopteran pests. While there’s always been interest in using entomopathogenic fungi like B. bassiana and M. rileyi, the virulence of entomopathogenic fungi is affected by environmental factors such as temperature, humidity, light, and solar radiation. 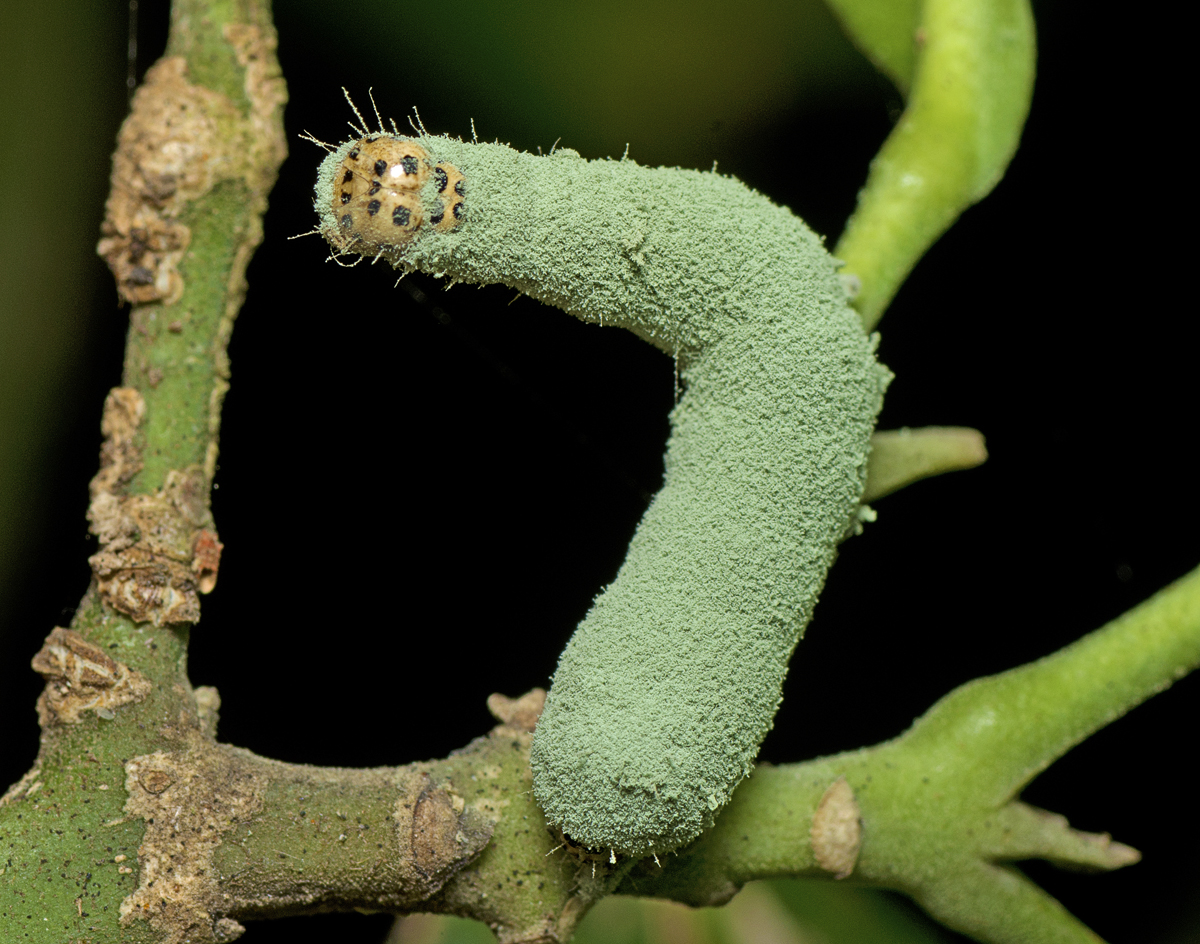