As Clarence Darrow said in his eloquent summation at the Scopes Monkey Trial: “Ignorance and fanaticism is ever busy and needs feeding. Always it is feeding and gloating for more.” To “ignorance and fanaticism” we can add “policing what other people can hear or read”, and a good example of that took place this week in Alaska, in particular in one school board that’s very hungry and gloating for a lot more.

The Matanuska-Susitna School Board,(MSSB) serving the second largest school district in Alaska (about 16,000 students), has just committed a dire act of censorship. (That district includes Wasilla, the city where Sarah Palin was mayor before she became infamous.) First, take a look at this list of five books:

“The Things They Carried” by Tim O’Brien

“I Know Why the Caged Bird Sings” by Maya Angelou

I’ve read all of them save O’Brien’s, and they are all justly regarded as classics. But according to several articles, including the Anchorage Daily News article below (click on screenshot), all five have been banned from the 13 high schools in the district, although all are used (and some required) in high schools of the contiguous Anchorage school district.  As Ron Charles wrote in his Washington Post book news email (h/t: Merillee, no link available), the students who would read the books are 11th and 12th graders in elective English classes—in other words 17- and 18-year-olds. They are hardly tender young sprouts! And yet, by a 5-2 vote, the yahoos on the MSSB made these books unavailable. 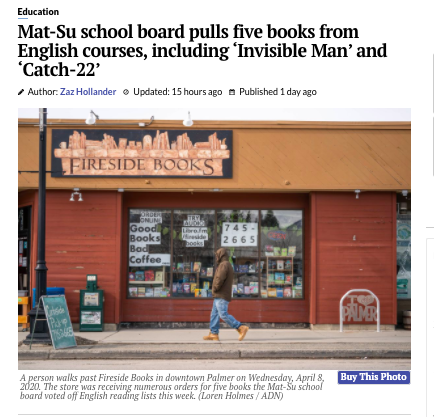 Why on earth would a school board ban these books, depriving the students of some of the world’s greatest novels in English—novels that could inspire a ton of thought and discussion in the classroom? (These books beg to be taught.) Well, you can guess.  As Charles wrote:

Watching the videotape of the Matanuska-Susitna Borough school board meeting on April 22, you can actually see America’s IQ points circle the drain and slip away. Board member Jeff Taylor noted that these books are “controversial because of words like ‘rape’ and ‘incest’ and sexual references and language and things that are pretty serious problems, especially in our teenage world. . . . I would prefer these were gone.” Then, incredibly, he asked, “Can you help me understand why we would include controversial subjects?”

Vice President Jim Hart agreed. While admitting that he hasn’t read most of these books, he noted that he has read the CliffsNotes — “not literally ‘CliffsNotes’ the brand,” he clarified, “but the SparkNotes.” In that case, please, go on! Hart was particularly alarmed about the two classic books by African Americans. Here’s what he discovered lurking in Maya Angelou’s memoir from 1969: “Chapter 11 of ‘I Know Why the Caged Bird Sings’ speaks of — not just molestation, but what happened during molestation in graphic terms. And in ways that, if I were to read this right now, the board would have perfect license to admonish me. . . . We’re talking about things that are very specific, and, you know, I think beyond the pale of just about any audience.”

One beleaguered board member who had a good sense of what great literature can do for high school students tried to push back, but to no effect. A moment was offered for public comment. None arrived. The vote was 5 to 2 to remove the books. Just like that, for these Alaskan kids, the world got a little whiter, a little smaller, a little dimmer. “So we beat on” — an allusion, alas, that members of the Mat-Su Borough school board won’t catch.

I haven’t watched that videotape, as it’s a bit over three hours long, but if you want to see what happened, knock yourself out—and then report back. But clearly the banning is about sex, though I can’t imagine what’s so objectionable in Gatsby, unless it’s the mention of Tom Buchanan’s mistress. And to ban a book you haven’t even read? I have no words, as they say. . . . except to surmise that those five censors are Republicans.

Who do these school-board members think they are—able to decide what a young adult can and cannot read, especially when the books are this great? It’s not as if these kids are completely unaware of sex and its dark side.  Well, henceforth the students of the Mat-Su Borough will not be allowed to read about either beating on or beating off. (Surely Portnoy’s Complaint would also be banned.)