JAC note: A bit more than two years ago, I made available to readers a Jesus-themed essay by reader Peter Nothnagle, whose day job is helping record early classical music. His essay, “Jesus: Fact or Fiction,” comprised a talk he gave to the to a joint meeting of the Unitarian-Universalist Society of Iowa City and the Secular Humanists and the Secular Students at Iowa. It came down on the side of Jesus being “fiction”, and here is its summary:

I conclude that the figure of Jesus was invented by one faction in a diverse religious landscape in an effort to create an “apostolic succession” of authority – “our priests were taught by priests that were taught by followers of Jesus Christ himself, in person”. But even if I’m completely wrong about that, it is undeniable that the only evidence that exists for a living, breathing, walking, talking Jesus is weak, contradictory, or simply fraudulent. Therefore no one can be justified in believing that such a person existed.

That essay has since been substantially revised and updated, and you can read it and download it here. It was very popular and inspired a lot of argument on this site.

Today we have a special Easter homily written by Peter seven years ago and also recently revised. It deals with the “miracle” of the empty tomb, and proffers a number of explanations that are purely naturalistic, even if you do believe that there was an empty tomb. It’s a good read for nonbelievers on this Easter Sunday, and I put it here with Peter’s permission. He invites readers to suggest their own explanations.

And, without further ado (Peter added the cartoon):

“So how do you explain the empty tomb?”, the Christian asks, assuming it’s a stumper.

According to the Gospel accounts, some of Jesus’ friends and relations (the different versions of the story conflict with each other on this and many other rather important details) visited his tomb two days after his execution (or three days, according to the Gospel of John), only to discover the seal broken, the stone rolled aside, and no body. They were informed, variously by the gardener, an angel, etc., according to which version you read, that the occupant had somehow gotten up and left. This evident miracle is a cornerstone of the Christian faith — who but a god could have pulled it off?

First of all, let’s get one thing straight. The story of the empty tomb is not evidence of a miraculous resurrection from the dead. The story is not evidence in support of the claim, it is only the claim. And the closest thing we have to an original source for the story is the anonymous Gospel of Mark, which was only written down after a whole lifetime had passed. The other gospels, written even later, take great liberties with Mark’s account, and elsewhere in the New Testament the epistles of Paul don’t count at all — Paul’s Jesus seems to have been some kind of celestial being who never even came to earth, and whose death and rebirth took place on some spiritual plane.

In order to believe something so amazing as a days-old corpse coming back to life, we’d better have some really good evidence. A reliable first-hand account by a non-Christian, written down at the time, would be good — like if we had a letter written by one of the soldiers guarding the tomb, which started with “You’ll never believe what happened at work today!” Of course we have nothing of the sort. Evidence might be provided by archaeology, although what that might be, I don’t know. After all, an empty tomb is not out of the ordinary (I’ve seen lots!). Since the Christians are accepting of miracles maybe they could produce something more unequivocal, like a first-century video recording of a body that had obviously been dead for several days coming back to life. That might be persuasive. You object that video technology wasn’t available in the first century? But mere humans invented video recording all by themselves — if there’s a god involved, and this god really, really wanted us to believe, you would think that this god could do it too.

A really strong piece of evidence that Jesus had overcome death would be if he were still among us all these centuries later, but we are told that he was beamed up to heaven the day he was resurrected (Mark 16:9,19; Luke 24:13,28-36,50-51), or maybe it was forty days after the resurrection (Acts 1:3,9). So whoever wrote the stories conveniently incorporated an excuse for why that most persuasive evidence no longer exists.

The only evidence we do have for the resurrection is of the very worst kind — a single fantastic story by an unknown author who didn’t even see it himself, writing from an unknown location at an unknown time for an unknown purpose. Some contradictory retellings (the other three Gospels and Acts) were written even later. All these accounts are preserved only as unreliable copies of long-lost original sources. If we are supposed to believe that anything so, well, unbelievable as the resurrection truly happened, this isn’t the way to convince us!

Christians often address this lack of evidence by saying that there is virtue in believing the story on faith, and that God knows that clear and compelling evidence would take away our capacity to choose freely to believe. Of course, according to the story itself, Jesus didn’t have a problem with demonstrating his resurrection to believers and doubters alike. Also, as a thought experiment, imagine what would happen if someone really did discover a first-hand account of the resurrection written by an actual eyewitness. Would the Christians still deny the importance of clear and persuasive evidence? I suspect not. So the emphasis on the value of accepting the story on faith sounds a lot like an excuse for the lack of evidence, not an explanation for it.

The Christian challenges us to come up with a better explanation for the empty tomb than the miraculous one he accepts on faith. It comes down to a choice between two possibilities:

If any Christian still wants to pose the question “how do you explain the empty tomb?” as a gotcha for the atheist, let me see if I can think of anything more likely than divine intervention. The best explanation will fit the elements of the story while requiring the fewest additional factors for which we have no evidence. [I suppose I betray my bias when I point out, one last time, that we don’t actually have to explain the evidence or facts, because there are none to explain — we know nothing except what’s claimed in the fantastical Gospel of Mark.]

Off the top of my head, here are ten explanations for the story of Easter morning, A.D. 33, that are all much more likely to be true than the story that Christians believe:

Of course, until we can say for sure if anything happened in the first place, there’s little reason even to speculate about how it happened.

See http://articles.exchristian.net/2004/04/easter-facts-quotes-and-quiz-for-you.html for chapter and verse. 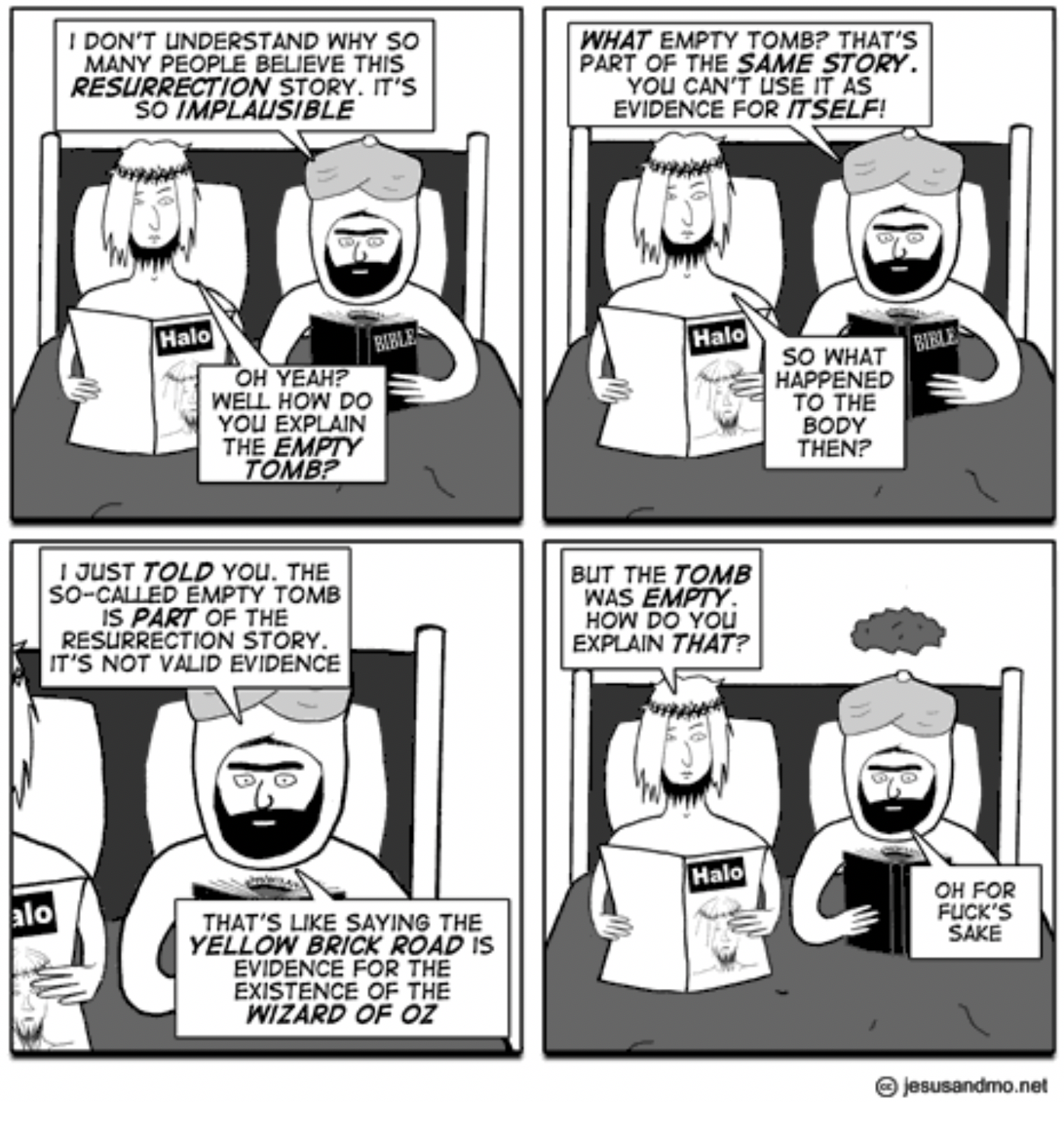