It’s Saturday, April 11, 2020, and already we’re almost halfway through April. It’s National Cheese Fondue Day (more cultural appropriation, but I prefer the equally appropriated dish of raclette). It’s also “International Louie Louie Day“, celebrating the birthday of the song’s writer, Richard Berry, in 1935. He recorded it in 1955, but the big hit version was by the Kingsmen in 1963. I still remember hearing that song for the first time: I was in an Army cafeteria in Germany and they played it over the loudspeaker. For a long time we all thought the inaudible lyrics were obscene, but they weren’t (they’re here). And here’s the Kingsmen’s version, in case you’re too young to remember:

On March 17, 1898, St. Patrick’s Day, Irish-born engineer John Philip Holland demonstrated a submarine he designed, the Holland VI, for the U.S. Navy Department, off the coast of Staten Island. During the demonstration, the vessel was submerged for 1 hour and 40 minutes.

Finally, because tomorrow is Easter (no, the pews won’t be filled except, perhaps, by lawbreakers in the South), it’s Holy Saturday, the day before Jesus supposedly rose (he was apparently not dead but quiescent).

Google Doodle was supposed to run its series on coronavirus helpers for two weeks, but I don’t see one today.

News of the Day: Dire as usual. The Covid-19 death toll is now 18,763 for the U.S. and 102,774 for the world.  Although the news allows us glimmers of hope about the curve “flattening”, in truth we’re in this for a long time, and I suspect the lockdown will last into the summer. If businesses reopen, expect a resurgence of the pandemic. In other words, we’re screwed. (I hope I’m wrong.)  The Moron in Chief, of course, is getting restive, and wants to open the economy soon.

You can read how hospital chaplains are dealing with the coronavirus in this NYT article.  Finally, also in the NYT but on the lighter side, Rube Goldberg’s granddaughter has started a competition for people to submit complicated devices to help wash their hands.

Stuff that happened on April 11 includes:

They of course issued the “letters patent” that in 1693 founded my undergraduate alma mater, The College of William & Mary—the second oldest college in America (the oldest is Harvard, my other alma mater).

In 1996, the recovered stone, also known as the Stone of Destiny, was moved to Edinburgh Castle, where it stays until the next regent of England is crowned. Here’s the Stone of Scone in place in Edinburgh:

Built by Steve “Woz” Wozniak, the Apple 1 was Apple’s first product. Here it is, along with an ad for it (check the price!): 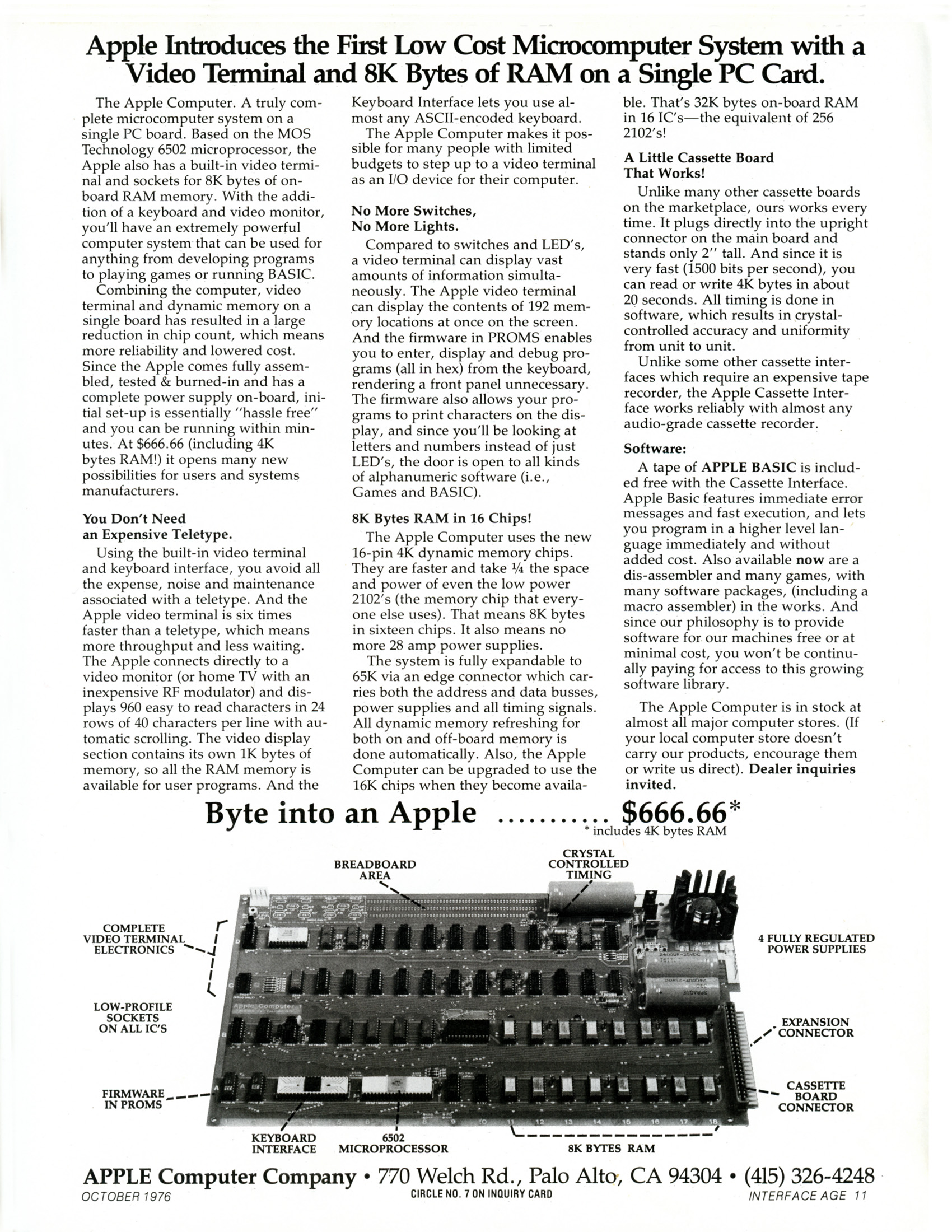 Smart, as you should know, wrote the best poem about a cat ever. “For I will consider my cat Jeoffry” was a 74-line fragment of Smart’s longer poem Jubilate Agno, written when Smart was confined for insanity. As Wikipedia notes:

The poem is chiefly remembered today – especially among cat lovers – for the 74-line section wherein Smart extols the many virtues and habits of his cat, Jeoffry. To this Neil Curry remarks, “They are lines that most people first meet outside the context of the poem as a whole, as they are probably the most anthologized extract in our literature.” Furthermore, Jeoffry himself is the “most famous cat in the whole history of English literature.”

I love that poem, but it’s too long to reproduce in this post. You can read it here.

Those who were struck down on April 11 by the Grim Reaper include:

My favorite James Brown song (excuse the patriarchal sentiments) is “It’s a man’s man’s man’s world” (1966). Here’s a very unusual live performance with, of all people, Luciano Pavarotti! I could do without Pavarotti’s Italian, which I can’t even understand.  But The Hardest Working Man in Show Business struts his stuff.

Meanwhile in Dobrzyn, Hili is foraging for supplements in the form of mice. Malgorzata explains:

A: What are you doing?
Hili: I’m looking for strengthening supplements to my diet. 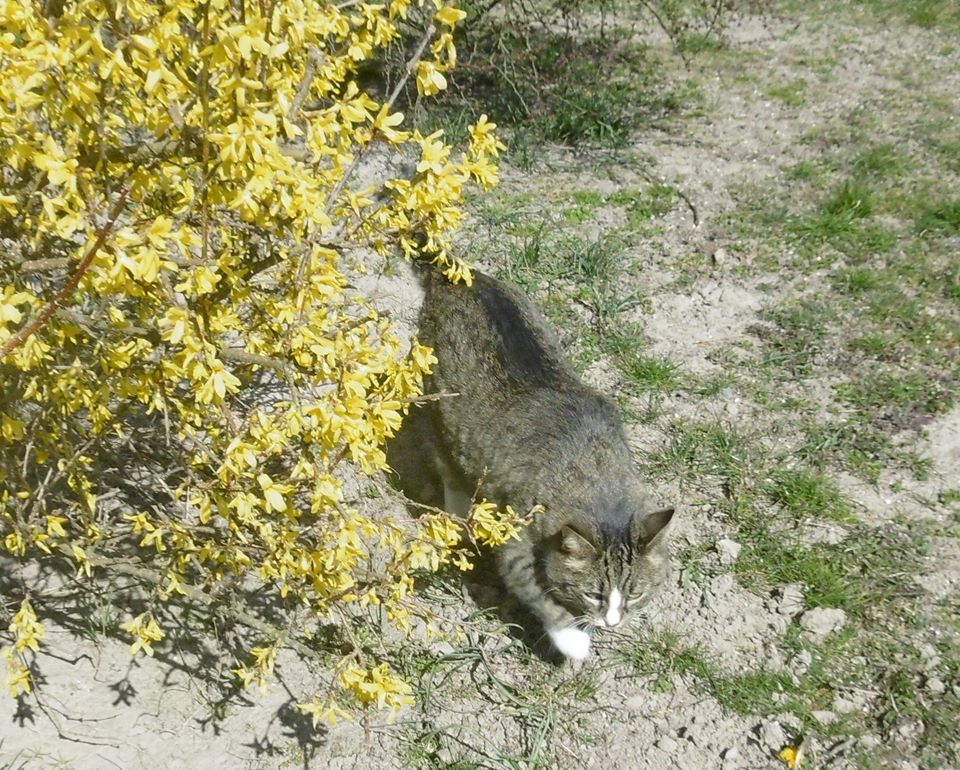 Here’s a cartoon sent by Ralph Richardson and drawn by his wife Patti.  He explains:

The cartoon backdrop is there is a glut in chicken wings in the country because March Madness and the NBA and other sports events have been cancelled, leaving the chicken wing industry with a lot of inventory. Homer can save the day! 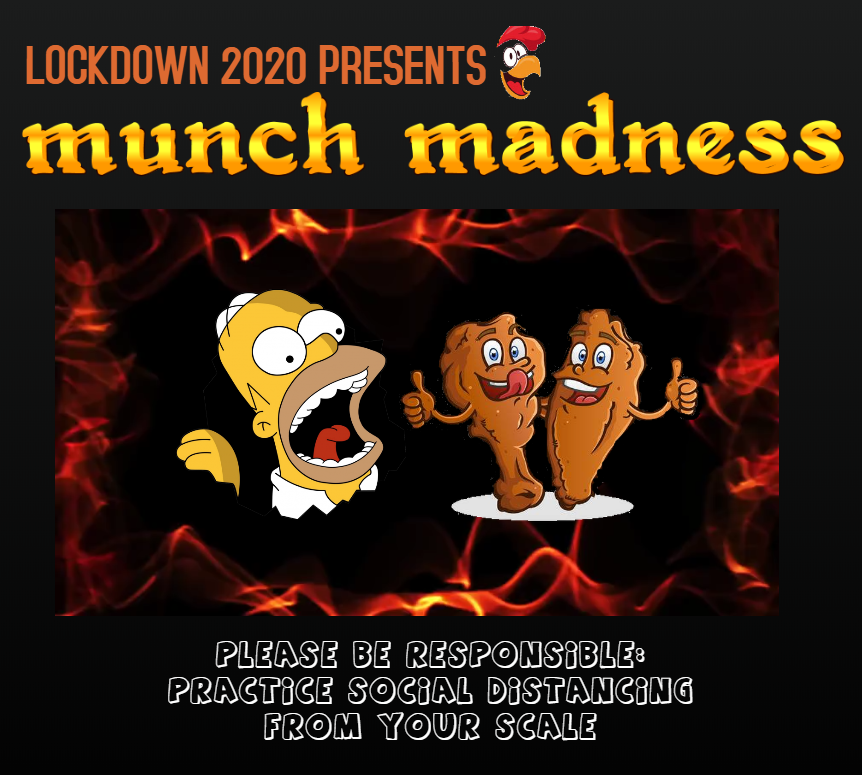 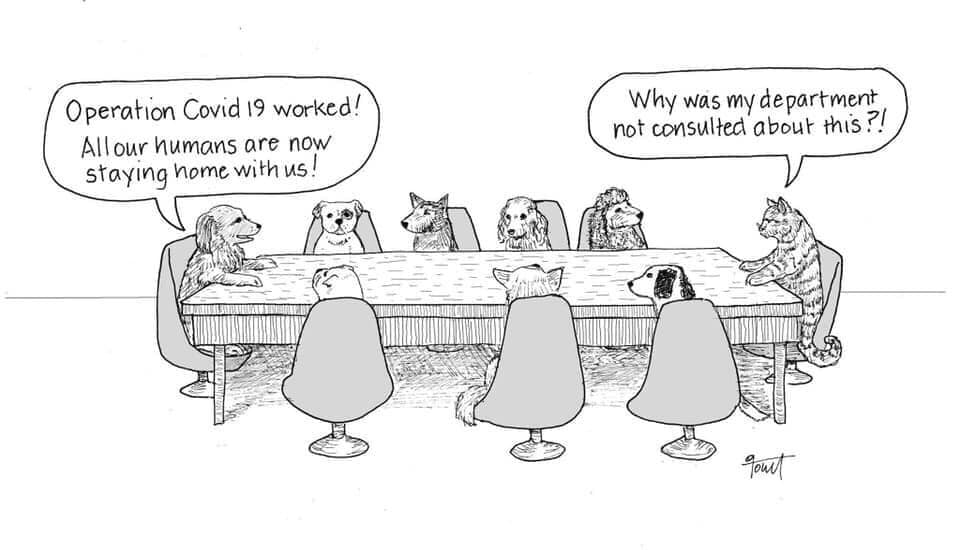 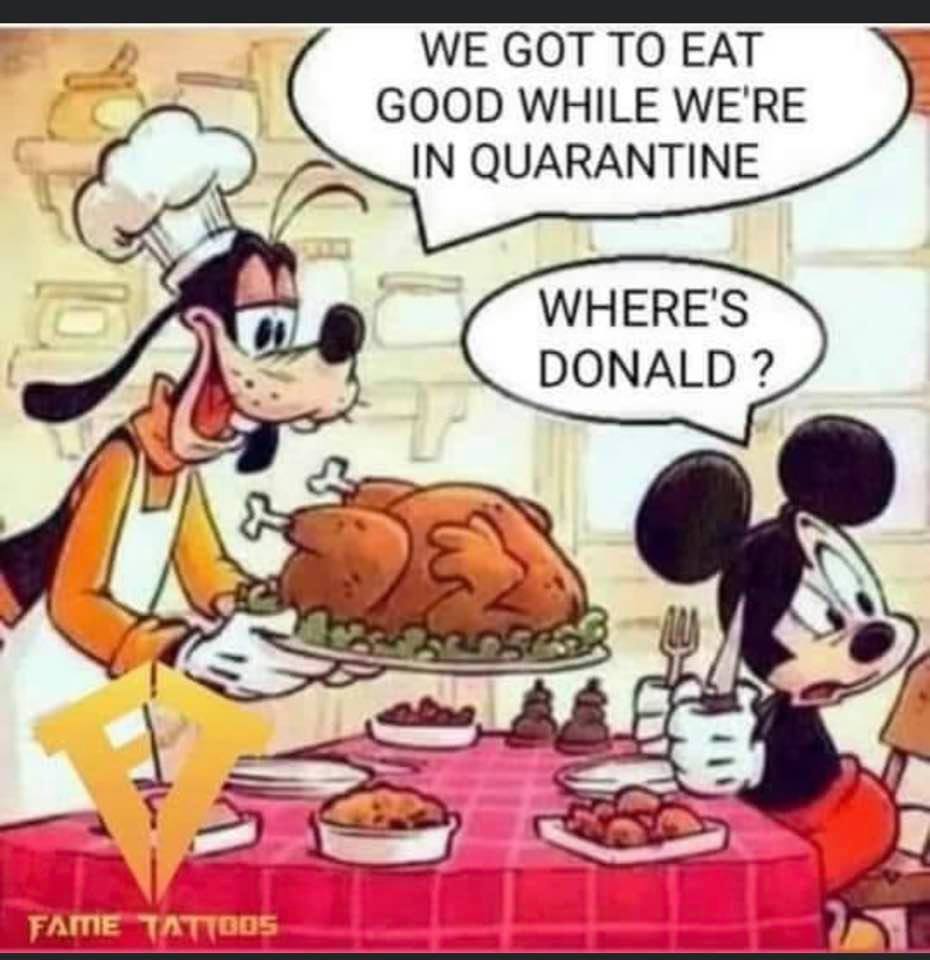 Check out this hummer: what a looker! But he’s pissed off.

Good morning. How about an angry rainbow to start your day?
(Golden-tailed Sapphire) pic.twitter.com/AsnNu3ABYe

Titania is on the job!

Am I the only one worried that all these masks are just another excuse for white people to indulge in partial blackface? pic.twitter.com/WoMiSDtqPa

Two tweets from Heather Hastie. I haven’t checked whether the first one’s true:

Let's go for the hat trick and get Dr. Phil tossed too.

Tweets from Matthew. I say “REPORT THE MISCREANT!”

Moral dilemma of the day. The priest in my old parish back home (who destroyed the church being ultra conservative, but that's another story) is holding secret masses and locking the door so he can't be stopped. Call the cops or not? I don't want the older people to die.

Darwin was often prohibited snuff, but he snuck it anyway. One of his children reported that they’d often hear the “clink” of the snuff jar on the mantel being opened and closed.

I am personally in a state of utmost confusion, for my cruel wife has persuaded me to leave off snuff for a month & I am most lethargic, stupid & melancholy in consequence. – Darwin, writing to his best friend today. #DarwinOnThisDay 10.4.1846 pic.twitter.com/rQj9QUGlFA

People really are starting to lose it during the lockdown:

Day 18 of lock down. Filled the dog with helium. pic.twitter.com/aiGEkhjwhI

Sound up on this beautiful BBC video of eleven ducklings a-leaping. Honey and Dorothy’s duckling will be doing this soon, and I hope they do it as well as these mandarins.

Seeing as it's Easter weekend we HAD to re-share THIS! Mandarian ducklings jumping from their nest STILL might be the cutest thing we've ever seen 😍 🦆🐥#Throwback #Easter #Springwatch pic.twitter.com/kLl1By1eAR