Ayaan Hirsi Ali has a new book, her fifth, and the fourth to have a one-word title (the others are The Caged Virgin, Nomad, Infidel, and Heretic, and I’ve read all but the first). The last one, Heretic, was subtitled Why Islam Needs a Reformation Now, and was her manifesto not to destroy Islam (which many think is her agenda), but to reform it from within. I wrote about it previously, and thought that while the motivation was good, Muslims would never accept Hirsi Ali’s five suggestions for reforming the faith (example: “Muslims must not take the Qur’an literally”).

If Islam is to be defanged, making the extremist and violence-prone segments go away, it not only has to be from within, but there’s no good program for doing it—even from Hirsi Ali, who spent much of her life as an ardent believer.

And if the last book diminished Hirsi Ali’s reputation as an “Islamophobic” (it didn’t—the SPLC pronounced her, along with Maajid Nawaz, “an anti-Muslim activist” and then withdrew that characterization when sued by Nawaz), this book will restore it. For it’s about those immigrants—many of them Muslim—who commit sexual violence on and harassment of women in Europe. Click on the screenshot to go to the Amazon site, or see the HarperCollins publisher’s description here. 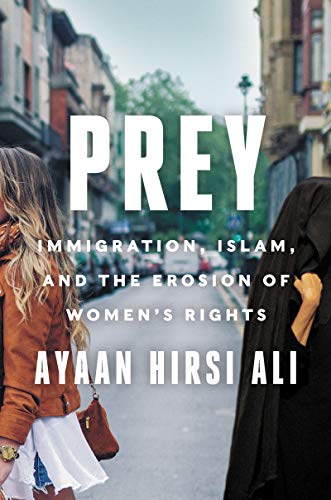 The sexual violence committed by immigrants to Europe, and its higher frequency among male Muslim immigrants, is an issue that, it seems, most European countries would rather keep under wraps, because it looks “Islamophobic” to both highlight it and, especially, to connect it with the misogyny endemic in much of Islam.  “Grooming gangs” of young Muslims are reported on in the British press, but the ethnic/religious connection has stalled both investigations of the crimes as well as their highlighting by journalists. Of course there are many rapists and harassers who aren’t Muslims, or are non-Muslims from East Asia, but it’s ridiculous to avoid discussing how religion (which is largely equivalent to “culture” for many Muslims) might feed into sexual violence. How can you deal with such crimes without understanding their source? But then, of course, there’s the hard problem of “what do we do with this understanding?”  That’s above my pay grade.

These are the issues that Hirsi Ali apparently deals with in Prey. Here’s HarperCollins‘s summary of the book, which I’ve excerpted (their emphasis):

Why are so few people talking about the eruption of sexual violence and harassment in Europe’s cities? Because almost no one in a position of power wants to admit that the problem is linked to the arrival of several million migrants—most of them young men—from Muslim-majority countries.

In Prey, the best-selling author of Infidel, Ayaan Hirsi Ali, presents startling statistics, criminal cases and personal testimony. She shows that, after a period when sexual violence in western Europe barely increased, after 2014 it surged. In Germany “offences against sexual self-determination” in 2018 were 36% above their 2014 level. Nearly two-fifths of the suspects were non-German. Asylum seekers were suspects in 11% of all reported rapes and sexual harassment cases in Austria in 2017, despite making up less than 1% of the total population.

This violence isn’t a figment of alt-right propaganda, Hirsi Ali insists, even if neo-Nazis exaggerate it. It’s a real problem that Europe—and the world—cannot continue to ignore.

Hirsi Ali explains why so many young Muslim men who arrive in Europe engage in sexual harassment and violence. She traces the roots of sexual violence in the Muslim world, from institutionalized polygamy to the lack of legal and religious protections for women.

A refugee herself, Hirsi Ali is not against immigration. . . Deeply researched and featuring fresh and often shocking revelations, Prey uncovers a sexual assault and harassment crisis in Europe which is turning the clock on women’s rights much further back than #MeToo has advanced it.

I’ll read it, as I’ve read most of her books, but be aware that this book is going to be excoriated for simply highlighting the problem, which everyone recognizes is a problem.  It’s ironic that the publisher mentions #MeToo here, for that underscores the double standards of liberal societies when dealing with feminism and Islam. Islamic doctrine is explicitly anti-feminist, and, in the thesis of this book, has devalued women to the extent that it leads to both sexual harassment and rape, just as it leads to the oppression of women in most Muslim counties. So we have a clash of underdogs—underdogs whose defense is a classic virtue of liberalism. In this case it’s Islam versus feminism. In America, the UK, and the rest of Europe, the Left seems to have decided that, as “people of color”, Muslims are more oppressed than women, and so, as Hirsi Ali insists, this has exacerbated the oppression of women in the West.

I’ll report on the book after I’ve read it.