UPDATE: Mary emailed me saying that she’d gotten a lot of email from people saying, in essence, “Thank you for making me cry and feel more hopeful this morning.”  Such is the power and value of good journalism!

A few days ago, Colleen Mastony, the Director of Media Relations at the University of Chicago, contacted me, saying that she’d heard about my duck-feeding activities as well as the letter from our Provost and President allowing me access to Botany Pond during the lockdown. Colleen used to work for our biggest local paper, the Chicago Tribune, and wanted to pitch the story to the Trib, saying that she thought it would make a nice “feel-good” story for these troubled times.  She wrote up a prospectus and sent it to her former colleague Mary Schmich, who writes a regular column for the Trib.

Schmich is a big presence in Chicago media (indeed, nationally): she writes a regular, widely-read, and nationally syndicated column for the paper for which she won a Pulitzer Prize in 2012. On top of that, she wrote the comic strip “Brenda Starr, Reporter” from 1985 to 2011, and penned one of the most famous “advice” pieces of our era, a column called “Wear Sunscreen“, incorporating the advice that she’d give were she asked to deliver a commencement address. That column became an eponymous book and was turned into a piece of mix music by Baz Luhrmann, which you can see and hear here (I can’t find the column online, but its words are in the video).

At any rate, Mary liked the idea of the story, interviewed me about Honey and the ducks over the phone, and, two days ago, appeared at the pond with a Tribune photographer, Terrence James. Mary asked lots of questions while Terrence snapped Honey, Dorothy, and Wingman, who cooperated by eating duck food for the camera and then preening on the center “bathtub ring”. He also photographed me feeding the birds. Fortunately, no other ducks showed up to cause trouble.

After those two interviews, Mary texted me with more questions: she was punctilious about getting all the details correct. And then, that same day (yesterday), her story on Honey, me, the ducks, and the University went online. And today it’s in the paper version of the paper. If you’re in the U.S. you’ll be able to access the story from the links below, but if you’re overseas those links won’t work and you’ll have to use this “wayback” link.

Yanks can read the online story, complete with two photos, at either the Tribune link below or the Effingham Daily News link below that (click on the screenshot).  Note that you can get one free Tribune story per month, but can subscribe for only 99 cents for three months.

I won’t reproduce the story; see it by clicking on these headlines or on the link above.

from the Effingham Daily News:

Mary did a terrific job synthesizing everything and giving it the necessary background, atmosphere, and feel-good patina (see the ending). I went down to the pond a few minutes ago and told the ducks, but they seemed more interested in their mealworms than in their newfound fame.

Here, in order from left to right, are Dorothy, Wingman, and Honey:

Finally, I sneaked a peek at the neighbor’s version in front of their door, and found that the story occupies half of page three. This is what you see when you turn the front page. Truth be told, I know why they used a photo of me but they should have had one of the ducks!

Anyway, now that Honey and her friends are famous, perhaps it will lead to more people visiting the pond. That carries the risk of them feeding bad stuff to the ducks, but the University has promised me a swell new “Do not feed the ducks” sign that will go up by the pond next week. It will say “Please do not feed the ducks. They are well taken care of” (my wording). More on that later. 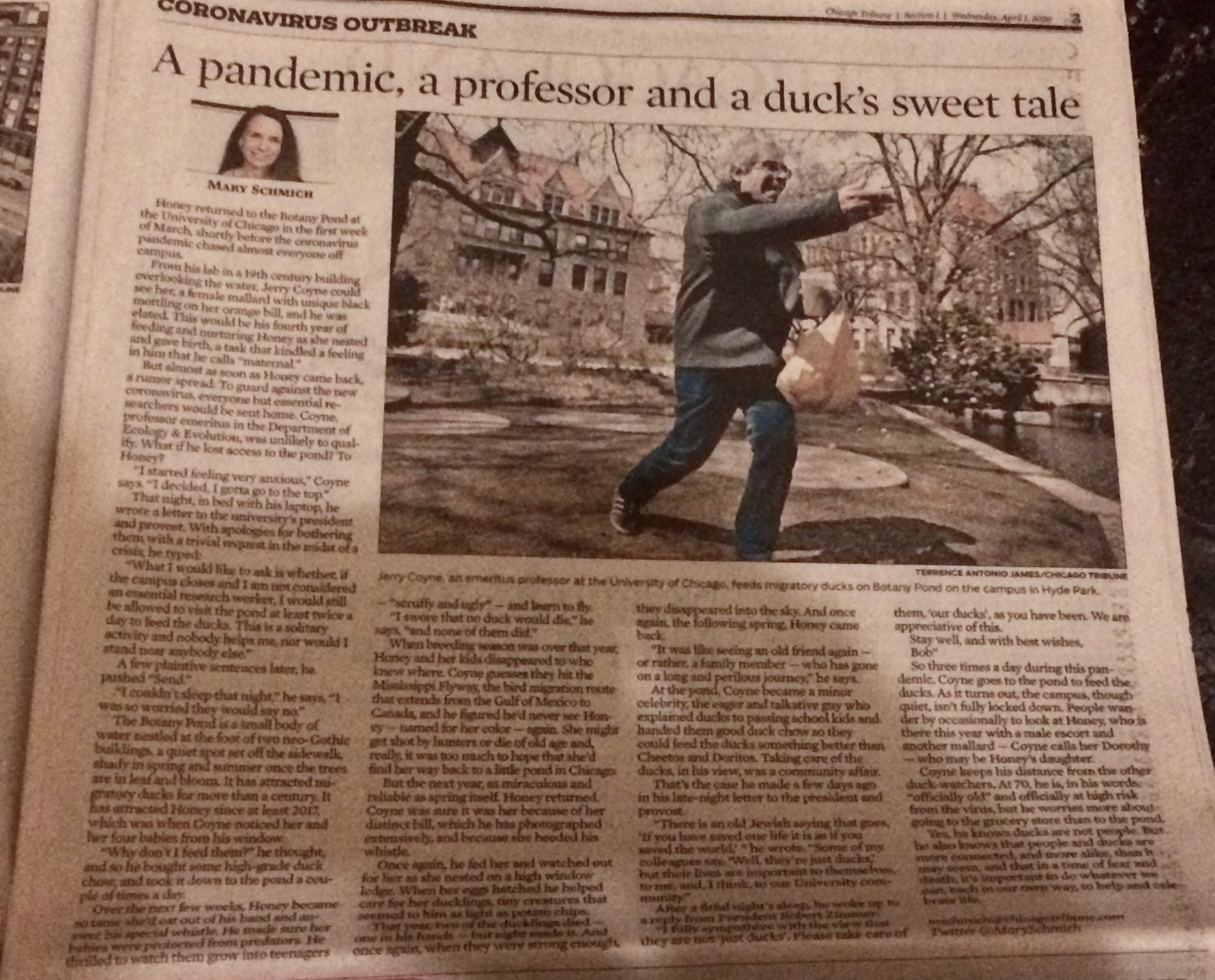