Christian neurosurgeon and intelligent-design advocate Michael Egnor insists that he and I are “debating” the appropriateness of prayer in response to the coronavirus (see my post here). But there is really no “debate”, just Egnor’s assertion (and my denial) that God is real and that prayer couldn’t hurt. He insists that I am “clueless” about the watertight evidence for God’s existence and am ignorant not just about natural theology, but about natural science. (I must have fooled a lot of people over my career!)

Egnor is obsessed with attacking me, and I’m convinced it’s because Intelligent Design has failed to catch on as its advocates promised, and so they resort to pushing a theological agenda and ignoring the indubitable evidence for evolution. This is a good example of that tactic, for here Egnor reiterates Aquinas’s “Five Ways” arguments for God—arguments that have long been refuted by philosophers—and claims that they’re dispositive: God really exists, and Aquinas proved it!

I hate to keep going back and forth with this clown (and I’m not going to be respectful of him given his language towards me). If you want to see some breathtaking examples of theological casuistry, though, read his latest piece at “Mind Matters,” one of the house organs of the ID-creationist Discovery Institute (DI). Like all the DI venues, it doesn’t take readers’ comments.

I’ve archived the article, which you can access by clicking on the screenshot. 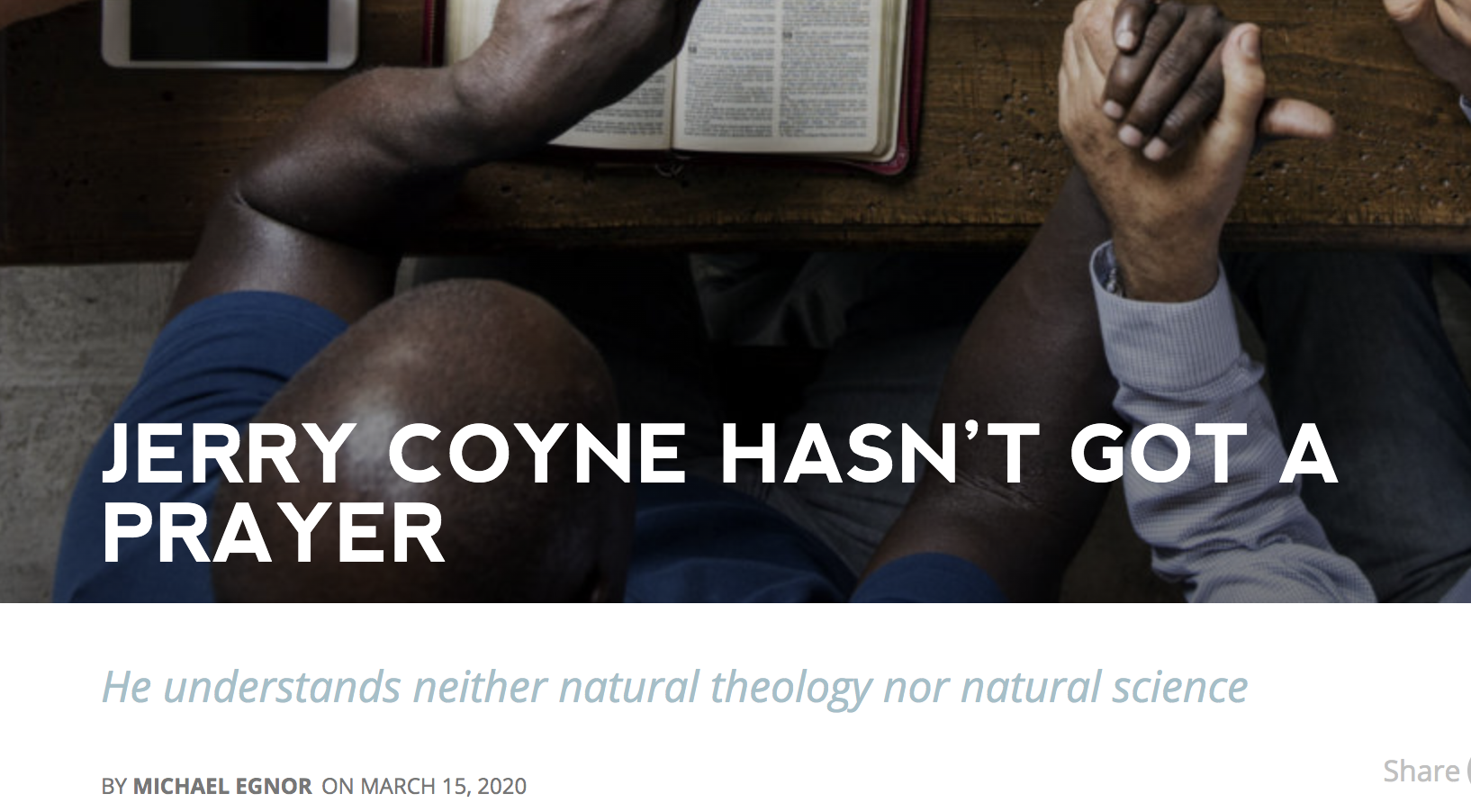 In response to my claim that any evidence for God’s existence must be empirical rather than logical, Egnor responds by citing Aquinas’s “Five Ways” as empirical arguments. Most of these five arguments are variants of the “First Cause” argument: everything is caused, there can’t be an infinite chain of causes, and therefore there must be a First Cause. And that First Cause is God—or at least, as Aquinas said, “this everyone understands to be God.” And that, he says, is an airtight empirical argument, for isn’t the observation of “cause” itself an empirical one?

I’ll just summarize a bit of Egnor’s argument, but if you want to be amused by the mental gyrations of a true believer, by all means read the rest of the short article.  Egnor’s words are indented:

Me [i.e., Egnor]: Evidence for the existence of God, as provided by Aquinas, actually consists of the same logical and evidentiary process as science itself, only with much stronger logic and more abundant evidence than any other scientific theory.

Coyne, in reply : If there are going to be arguments for god that are convincing, they will have to be empirical ones, not theoretical lucubrations of ancient theologians.

[Egnor]: Coyne is clueless. All valid proofs of God’s existence—and there are many—are empirical proofs. As St. Thomas observed, any proof of existence must contain empirical evidence in its premise, because a purely logical proof, which is valid for mathematics and logic, cannot demonstrate the existence of anything. That is why the ontological proof of God’s existence is invalid. You can’t, by pure reason alone, conclude that God (or anything) exists. You must have evidence.

Well, yes, the ontological proof of God’s existence is a bizarre non-starter (read about it here). But here’s Egnor’s argument for why Aquinas, the consummate scientist, was correct in making an inductive and empirical argument for God.

All valid scientific theories are inductive. We begin with evidence, arrange the evidence in a logical (often mathematical) framework, and draw a conclusion. Here’s the Darwinian inference, for example:

This theory of common descent, which Jerry Coyne accepts, is inductive—it is not and cannot be a deductive proof.

Well, the causes of evolution are independent of the observations of common ancestry, for you can have common ancestry regardless of what causes evolution, so long as it’s a gradual process that leads to changes in lineages as well as splitting of lineages (speciation). The causes could be natural selection, genetic drift, Lamarckism, teleoglogical or theistic evolution, and so on. You will get common ancestry under any theory of change so long as it is gradual, leads to splitting of lineages, and characters are modified only gradually after splitting occurs.

On to the First Cause argument as rehashed by Egnor:

1) Change exists in nature (evidence)
2) Change is the actuation of potentiality, and an essential chain of actuations cannot go to infinite regress. A fully actual Prime Mover is necessary (logic)
3) That Prime Mover is what all men call God (conclusion)

While the first claim is basically correct, though not all things change (e.g., the speed of light in a vacuum or the laws of physics), the other two claims are where Aquinas’s argument collapses. I don’t want to reiterate the many flaws of even the first of Aquinas’s Five ways, as you can find those refutations in numerous places (e.g., here, here, here, here and here; I also have an earlier post on the First Cause argument as supported by Egnor and his ID colleage Klinghoffer here).

In brief, here are a few of the many counterarguments:

a.) There is no reason a chain of actuations cannot “go to infinite regress”. If there’s a multiverse, that’s more or less what you get. See Sean Carroll’s discussion below.

One sometimes hears the claim that the Big Bang was the beginning of both time and space; that to ask about spacetime “before the Big Bang” is like asking about land “north of the North Pole.” This may turn out to be true, but it is not an established understanding. The singularity at the Big Bang doesn’t indicate a beginning to the universe, only an end to our theoretical comprehension. It may be that this moment does indeed correspond to a beginning, and a complete theory of quantum gravity will eventually explain how the universe started at approximately this time. But it is equally plausible that what we think of as the Big Bang is merely a phase in the history of the universe, which stretches long before that time – perhaps infinitely far in the past. The present state of the art is simply insufficient to decide between these alternatives; to do so, we will need to formulate and test a working theory of quantum gravity.

c.) If you’re going to talk about causes, then what caused God? People like Egnor who make these arguments call god the “Unmoved Mover” or the “First Cause”, and so the question “who made God?” seems to them nonsensical, but nobody has made a convincing argument why the buck must stop at God (see my post here). See (b) above. The question of “where did God come from”—if there is a god—remains viable and trenchant.

d.) This is perhaps the dumbest of Aquinas’s arguments, but it’s one that Egnor buys into: Why is the Prime Mover—even if there is one, which isn’t necessarily the case—identical to the Christian God, the very God embraced by Aquinas and Egnor? This flaw can be seen at the end of all of Aquinas’s Five Ways: they finish with a sentence that says “This everyone understands to be God.” What a fricking joke! Everyone?  What about those of other religions, whose gods (and there can be multiple gods) are not Christian gods, and not ones that have the salvific Jesus as a divine son of God.  And what if space aliens are the prime movers?

Even if you take Aquinas’s argument seriously, and even if you buy his premise that everything needs a cause—which I don’t buy, and which physicists don’t buy—all you can conclude is that there was a beginning to things. Beyond that, you can say nothing, not even that there was a “being” that started it all off with an act of creation.

Egnor and his delusional confrères (including Aquinas himself) immediately conclude that the “prime mover” must be the Christian God, with all his omnipotence, benevolence, and omniscience, but this is surely the paradigm of tendentiousness. THEY JUST DON’T KNOW, but make the assertion anyway. Is that a “scientific proof” of a divine being, much less of a Christian God? I’m burning with curiosity about how they know who the Prime Mover really is. (You know the answer: they’re going on faith.)

And so Egnor comes to the end of his tiresome affirmation of his own Christian faith:

The inference to God’s existence based on the Prime Mover argument is a scientific theory—supported by massive evidence (change occurs in nature) and irrefutable logic (the reality of potency and act, and the law of non-contradiction). We are more scientifically certain of God’s existence than we are of quantum mechanics or Newtonian or relativistic gravitation.

I think I’ve shown that the reasoning is not valid for several reasons, and I’ve demonstrated that “all rational men who haven’t already embraced religious superstition know the First Cause argument to be nonsense.”

Notice that we don’t have the same kind of evidence for Egnor’s god as we do for the Big Bang, where we can see the expanding universe and hear the echo of that Bang. Egnor’s “evidence” is the argument that “everything has a cause in a chain of actuations,” and we already know that that isn’t an empirical observation, but a claim—one that isn’t supported by data from radioactive decay or, indeed, from the existence of the Big Bang.

Perhaps in his next piece of the debate (and I’m pretty much done debating tendentious faithheads like Egnor), Dr. Egnor will explain to us how he and Aquinas can conclude that the Prime Mover just happens to coincide with the God of Scripture. Rest assured that he’ll have an answer, but you can be equally assured that it won’t make sense to those not already marinated in religious Kool-Aid.