On March 12, I wrote about the new Nature paper describing the fossil of Oculudentavis khaungraa, identified as a tiny (2-gram) dinosaur/bird found in Burmese amber. But the very next day I had to hedge the results after reading Darren Naish’s Tetrapod Zoology post, not only on humanitarian grounds (the amber used in the study may be “blood amber”, used to fund the military), but, most important for the science, because other paleontologists started doubting that this fossil was indeed that of a theropod. As Darren notes,

“. . .  a number of experts whose opinions I respect have expressed doubts about the claimed theropod status of the fossil discussed below and have argued that it is more likely a non-dinosaurian reptile, perhaps a drepanosaur or lepidosaur (and maybe even a lizard).”

The article below, translated from the Italian by Google (click on screenshot), was called by my attention by reader Gerdian de Jong who wrote this to me:, “The respected paleontologist Andrea Cau writes in his blog Theropoda.blogspot why Oculudentavis is not a bird or theropod and that wider analysis points to stem-Gekkota.”

First, though, here are two reconstructions of O. khaungraa by Darren, who kindly gave me permission to reproduce them here (© Darren Naish/Tetrapod Zoology). The captions are his.

A to-scale reconstruction by Darren. Note that the ruler is in centimeters, not inches (2.54 cm/inch, so the 10-cm ruler is only about four inches long.

I’ll call attention to other articles/critiques about this specimen as they come to my attention. At any rate, right now it’s unwise to regard this as a theropod dinosaur that was also avian.

Click on the screenshot to read in Italian or get a translation. I’ll provide a summary of the translation (indented) below. 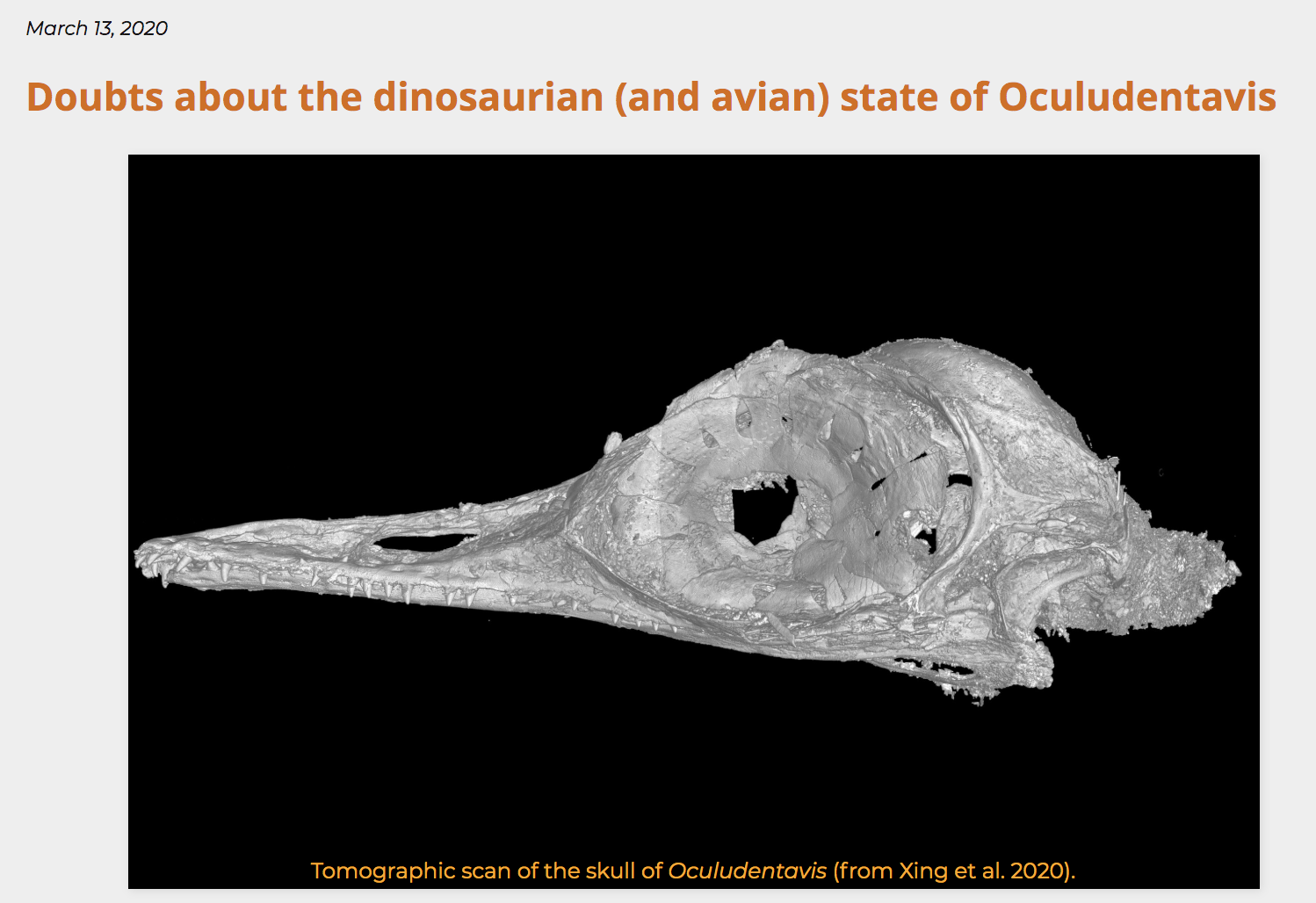 After reading the study, and observing in detail the navigable 3D model of the skull, produced by the authors, I believe that the interpretation proposed by Xing et al. (2020) is very problematic. Oculudentavis in fact has numerous anomalous characteristics for a bird and even for a dinosaur. And this makes me doubt that it is classifiable within Dinosauria (and Avialae).

Coronoid process that describes a posterodorsal concavity of the jaw.

Oculudentavis is much smaller than any other Mesozoic avian discovered so far. Its dimensions are comparable to those of the skulls of many small squamata found in Burmese amber.

In conclusion, there are too many “lizard” characters in Oculudentavis not to raise the suspicion that this fossil is not a bird at all, let alone a dinosaur, but another type of diapsid, perhaps a scaled lepidosaur, if not possibly a specimen very immature than some other Mesozoic group (for example, a coristodero).

To read more about why the traits in bold are more indicative of a lepidosaur than a dinosaur, read the original article.

But what are lepidosaurs? They are a monophyletic group of reptiles that contains the extant snakes, lizards, tuataras and worm lizards (“legless” lizards). “Monophyletic” means that the group contains all descendants, living or extinct, from a common ancestor. Lepidosaurs do not include dinosaurs. Here’s a family tree from Quora, which shows that dinos aren’t within the Lepidoauria, as the latter group is over on the right.

Now the fact that this fossil may not have been a theropod dinosaur but a lepidosaur, like a lizard, doesn’t make the original results uninteresting. In fact, to me it makes them more interesting. First, it shows that there could have been convergent (independent) evolution to birdlike forms in both dinosaurs and lepidosaurs (perhaps from a lizard-like ancestor). That would be stunning.

Further, it shows that regardless of whether the species in amber was a theropod or a lepidosaur, there may have been a whole radiation of miniature, bird-like creatures from an entirely different group of reptiles. Whether that was true depends on finding more specimens. Since these are small and fragile, it’s unlikely that they’d be found in anything other than amber. We shall see.

In the meantime, I hope the mainstream press, which touted this specimen as a form of dinosaur, at least gives a clarification.  While the messy details of anatomy are unlikely to interest the public, at least they’ll know that science is an ongoing process, and what is regarded as “true” is provisional, only becoming less provisional when more data are gathered. Right now we have but a single specimen of this type.