UPDATE:  In light of new data and criticism of this paper, it has been retracted. The “dinosaur” is in all likelihood a lizard or other non-dinosaurian reptile . For more information see the Nature report here.

Yes, we have a novel fossil, just described in Nature, that’s neither fowl nor reptile. And it’s TINY—roughly two grams. How small is it? Well, it’s about the size of the world’s smallest bird: the bee hummingbird of Cuba  (Mellisuga helenae), which is this size:

The intermediacy of this fossil, which is part of the radiation that led to the evolution of modern birds from dinosaurs, is instantiated by the title and content of the paper below (it’s not free, but judicious inquiry will get you a copy).

The fossil, found in 99-million-year-old amber from Myanmar (Burma), is called a dinosaur above, but in the fourth paragraph of the paper it says (my emphasis), “Diagnosis: Very small bird with the following autapomorphies [a derived trait found only in one species or group]”.  Is it a bird or is it a dinosaur?

Well, it’s both: it’s a transitional form: both the smallest dinosaur ever found as well as the smallest extinct bird. (As I said, it’s about the size of the smallest living bird: the bee hummingbird. Both weigh about 2 grams, or 1/15th of an ounce!) The transitional nature of the creature is shown by its reptilian features, including teeth, as well as birdlike features including a well-defined eye socket and a dome-shaped skull (see below). But it also has unique features, like a massive “scleral ring” (a circle of heavy bones around the eye); many teeth (over 100 in total) that extend the length of the jaw; the fact that the teeth are not, like those of dinosaurs, embedded in sockets but attached to the jaw by their sides; and the shape of the eyes, which suggests that they may have bulged out of its head like a lizard’s. These features are not known in either dinosaurs or early or modern birds.

Because the creature was found in amber, it was well preserved compared to early birds, which have fragile bones that are easily crushed. (The Chinese specimens that gave us much insight into bird evolution come from very fine sediments that preserved and mineralized the bones, but nothing this small has been found—only one-sixth the size of the next largest early bird.) The species has been named Oculudentavis khaungraa (“Eye-tooth-bird” with the name khaungraae coming from the donor, Khaun Ra).

Here are some photos and drawings from the paper; I’ve put below the CT scan of the skull as well as a larger picture of the amber. Note that the scale bar at the top, to the right of “b”, is only 5 mm, or about 1/5 of an inch. 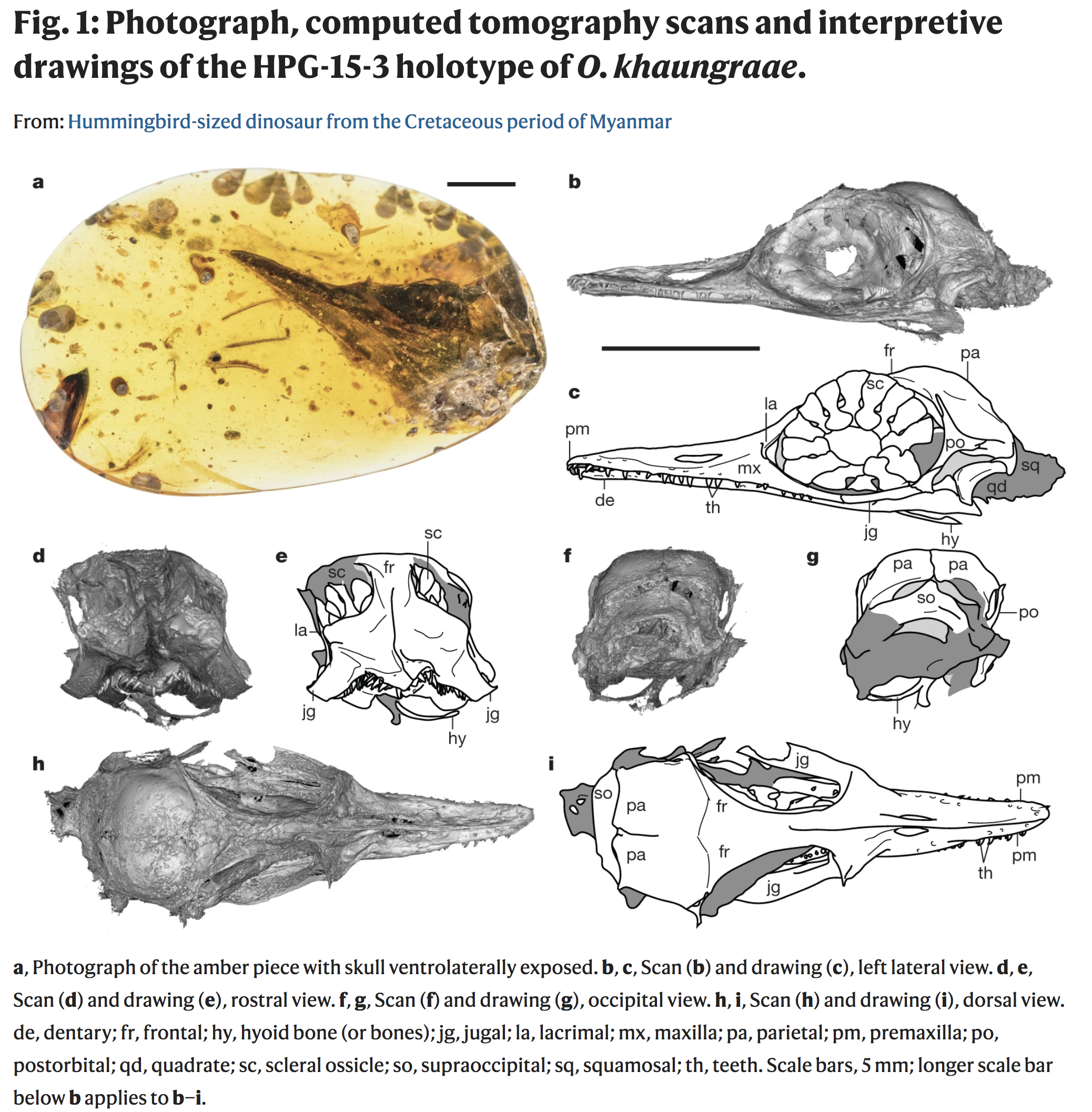 The CT scan is below. Look at that bony ring (“sclerites”) around the eye! The fact that the eye opening is small suggested to the authors that this creature was diurnal (active during the day). 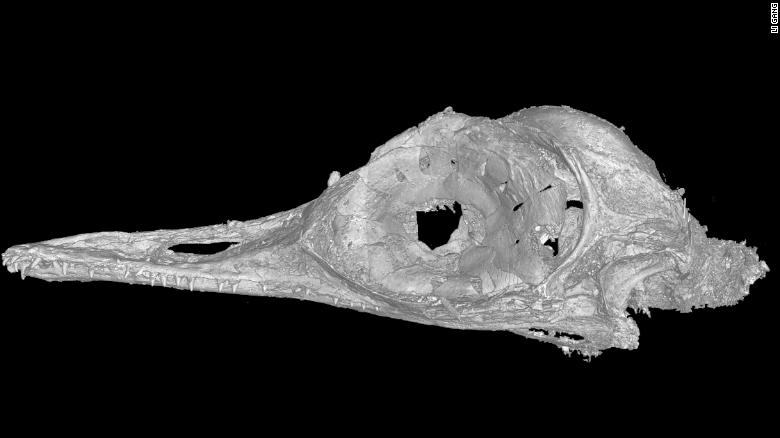 Further, the numerous teeth, which, as you can see from above, go all the way from the tip of the jaw to behind the eye, as well as the shape of the tongue, suggested to the authors that this was a predator. Unlike the smallest birds like hummingbirds, which sip nectar, this thing probably ate small arthropods and other invertebrates.

Here’s an enlargement of the amber in which it was found: 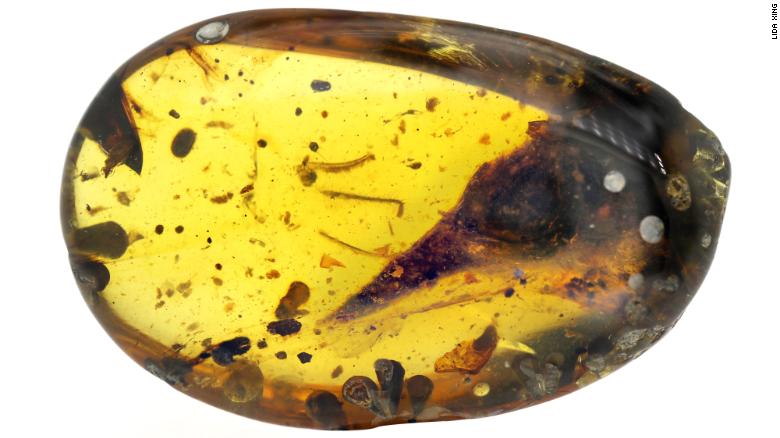 Because of the many unusual and unique features of Oculudentavis khaungraa, it’s hard to place it in a phylogeny of birds and dino-birds. The authors have tentatively placed it where the red arrow is in the phylogeny below, near the famous Archaeopteryx. But the authors also suggest that “the taxon falls outside Ornithuromorpha” (also called Euornithes), the group that includes all modern birds. The fact is that it’s such a weird creature means that they can’t really place it anywhere with any accuracy.

The authors suggest that the weird features of the creature are a byproduct of its miniaturization, which can, they say, cause the reappearance of ancestral traits. And while they and the media—which has covered this widely—say that O. khaungraa can shed light on early bird evolution, it’s hard to see what light that is.

Since there’s only one specimen, and only the head, it’s hard to tell what it means. It may be a one-off group, a weird branch in the early radiation of avian-like theropod dinosaurs that went extinct. It may show us that the ecology of early feathered dinos, which probably now includes diurnal predators on invertebrates, is wider than previously thought. The interest in this creature probably stems mostly from its intermediacy, its size, its excellent preservation, and its combination of features hitherto unknown in the radiation of feathered theropods. (We don’t know if O. khaungraa had feathers, as the paper gives no information, but it seems likely).

Here’s a very good 3.5-minute Nature video that summarizes the discovery in detail.