Yesterday I wrote about the discovery, published in Nature, of a very small theropod dinosaur that appeared to be part of the radiation of early birdlike dinos. It was tiny and had features so unusual that it couldn’t really be placed in a phylogeny. The creature was named Oculudentavis khaungraae and was remarkably well preserved (well, just the head) in Burmese amber dated at 99 million years ago.

I’d like to issue an addendum after reading Daren Naish‘s post on his well -known website Tetrapod Zoology (h/t Dom). As Naish is a vertebrate paleontologist, he knows a ton more than I about this stuff, and in fact is able to evaluate its phylogenetic position. You can read his post by clicking on the screenshot below:

There are two issues raised by Daren. The first is whether this really is a feathered, avian-like theropod. The second is the ethicality of using specimens from Burmese amber. We’ll take the science first, with quotes from Naish’s piece indented.

After consulting with various experts in the field, Naish says this:

. . . . a number of experts whose opinions I respect have expressed doubts about the claimed theropod status of the fossil discussed below and have argued that it is more likely a non-dinosaurian reptile, perhaps a drepanosaur or lepidosaur (and maybe even a lizard).

That might explain why some of the fossil’s features, like the bulging of the eyes from the head, are more lizard-like than theropod like.  Here’s one reconstruction of the creature by Mette Aumala, reproduced by Nash (I’ve also obtained permission to use it): 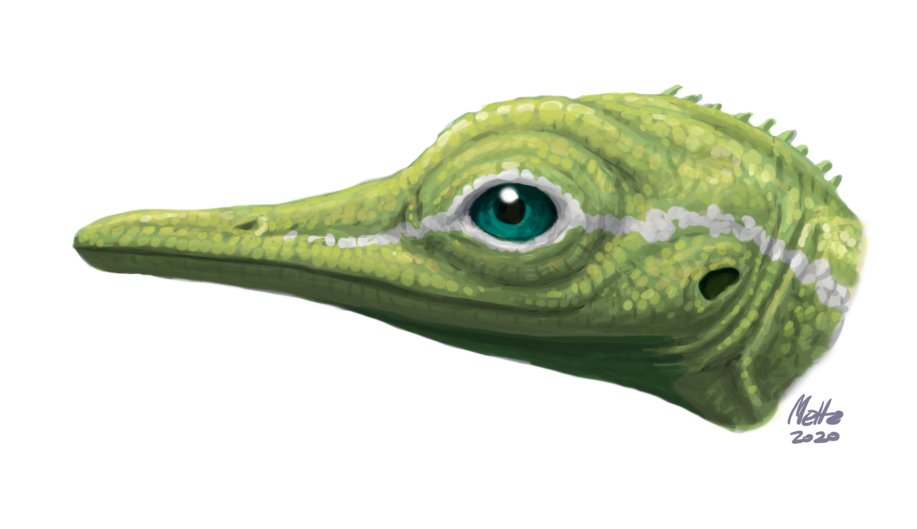 The Tetrapod Zoology piece has several drawings and reconstructions of the creature by Naish, and you can see them there.

If it’s not a theropod, and not a feathered relative of early birds, this would markedly change its evolutionary significance. It wouldn’t make the fossil insignificant, but would divert us onto a track about the possibility of a bunch of miniature reptiles (and maybe amphibians) that we don’t know about because they’re too small and fragile to be preserved.

If it is a theropod, Naish is excited by the possibility that many early birds may have been as tiny as this creature (Naish estimates it as about 9 cm long, or about 3.5 inches).  Finally, if it was a theropod/bird, Naish speculates, following the authors, that it could have foraged for invertebrates on the forest floor, or even on “tiny vertebrates, like a dinosaurian shrew.”

At any rate, after reading Naish’s article we need to step back and not decide, prematurely, that this was an early avian creature or even a descendant of theropod dinosaurs. The mainstream press, unwilling to investigate as deeply as Naish, missed the possibility that this may be not a theropod but possibly even a non-dinosaurian reptile.

Second, there’s the issue of the amber. Naish gives three links to articles about why studying specimens from Burmese amber might be illegal (one of the links goes to a paywalled New Scientist article, but the other two are below).  The issues are these:

1.) Much of the recent informative, specimen-containing amber has been smuggled out of Myanmar illegally into China, depriving Myanmar of its paleontological heritage.

2.) The Burmese military and paramilitary could derive funds from these sales, so the money could be use to fund their wars against ethnic minorities like the Rohingya or Kachin.

3.) The workers aren’t treated particularly well (for example, if there’s an accident, they have to pay for their own healthcare).

5.) Finally, not an ethical issue but a scientific one. Many of these specimens simply can’t be accurately dated because they’re dug out of the ground in areas off limits to those who could provide dates.  The specimen used in the Nature paper was dated at 99 million years old, but that’s based on locality information, not on dating the amber itself or the surrounding strata. And the locality information may be dubious as well. Accurate dating is of course essential to place the fossil in its evolutionary context.

Here are two links about the ethicality of describing specimens from Burmese amber; they are given by Daren, and I give two short extracts and the links:

From the New York Times:

But much of the fossil-rich amber is mined in Myanmar, a country recently ordered by the United Nations International Court of Justice to protect its Rohingya Muslim minority against genocidal acts. The mining and sale of the amber may also be a source of profit for the country’s military. A report published last year in Science Magazine detailed how the amber is mined in a state where Myanmar’s military has long fought another ethnic minority, the Kachin, and how amber gets smuggled into China, where it can fetch high prices, potentially fueling that conflict.

These concerns are leading more scientists, especially in Western countries, to shun the use of this amber in paleontological research.

“Ever since the Rohingya crisis, I’ve boycotted the purchase of Burmese amber, and have urged amber colleagues to do the same,” said David Grimaldi, a paleontologist and the curator of amber specimens at the American Museum of Natural History in New York.

From Science:(article noted above; long and worth reading):

But as much as Burmese amber is a scientist’s dream, it’s also an ethical minefield. The fossils come from conflict-ridden Kachin state in Myanmar, where scientists can’t inspect the geology for clues to the fossils’ age and environment. In Kachin, rival political factions compete for the profit yielded by amber and other natural resources. “These commodities are fueling the conflict,” says Paul Donowitz, the Washington, D.C.–based campaign leader for Myanmar at Global Witness, a nongovernmental organization. “They are providing revenue for arms and conflict actors, and the government is launching attacks and killing people and committing human rights abuses to cut off those resources.”

Here’s a really nice Science video from last May on the general issue of specimens in amber, what knowledge we’ve derived from them, and the ethical problems of studying Burmese amber.