As I reported the other day (to my chagrin), Grand Central Publishing, one of the imprints of the Hachette publishing group, decided to cancel publication of Woody Allen’s memoirs, Apropos of Nothing, after Hachette employees walked off the job in protest. Two days earlier, Allen’s son Ronan Farrow (possibly the biological son of Frank Sinatra), and author of the bestselling #MeToo book Catch and Kill, published by a different division of Hachette, broke ties with the publisher because he’s accused Allen of having sexually molested his stepsister and Woody’s adopted daughter, Dylan Farrow. Allen has consistently denied those allegations, which were investigated twice and dropped for lack of evidence. Further, Allen’s adopted son Moses Farrow (who was in the house during the supposed molestation), says it never happened—Dylan was said to have been coached by Mia Farrow. (You can read Moses’s testimony here.)

Initially the CEO of Hachette defended the publication of the memoirs, but then, in the face of social-media pressure, the publisher reneged on its agreement with Allen and dropped publication. It’s not clear yet whether another publisher will touch this book.

What Hachette did is unfair on several grounds:

1.) There is no convincing evidence that Allen was guilty of sexually molesting Dylan Farrow. There were two investigations, both of which cleared him, and Moses’s testimony (he’s now a family therapist), is clear and straightforward.  Allen is not guilty of any crime and, unlike Harvey Weinstein, the accusations center around a single incident with conflicting testimony. To presume he’s guilty and walk off your publishing job because of that is, to say the least, unreflective and premature. But today’s ideological climate often conflates an accusation with guilt—a harmful trend that damages not just individuals but the justice system itself.

2.) In light of any evidence of guilt, it’s unethical to withdraw the memoirs, no matter how much nastiness there was on Twitter or Facebook. They had an agreement with Allen, and no good reason to “unpublish” his book. Remember, a good publisher will publish good books, as a good publisher is dedicated to freedom of speech, and unless the author proves to have done something nefarious that the publishers didn’t know about, there’s no “morals clause” that mandates unpublication.

3.) Hachette has prevented Allen from telling his side of the story in public—even if he’s done so in court. What kind of publisher will publish books by Ronan Farrow but prevent somebody he’s accused from defending himself?

If the evidence against Allen were more convincing, perhaps I wouldn’t be as upset. But it isn’t, and I feel sorry for those who automatically think that accusations are tantamount to guilt.

Two days ago, the Guardian—of all places—published a defense of Allen’s right to publish. You can access the article, written by Hadley Freeman, by clicking on the screenshot below. 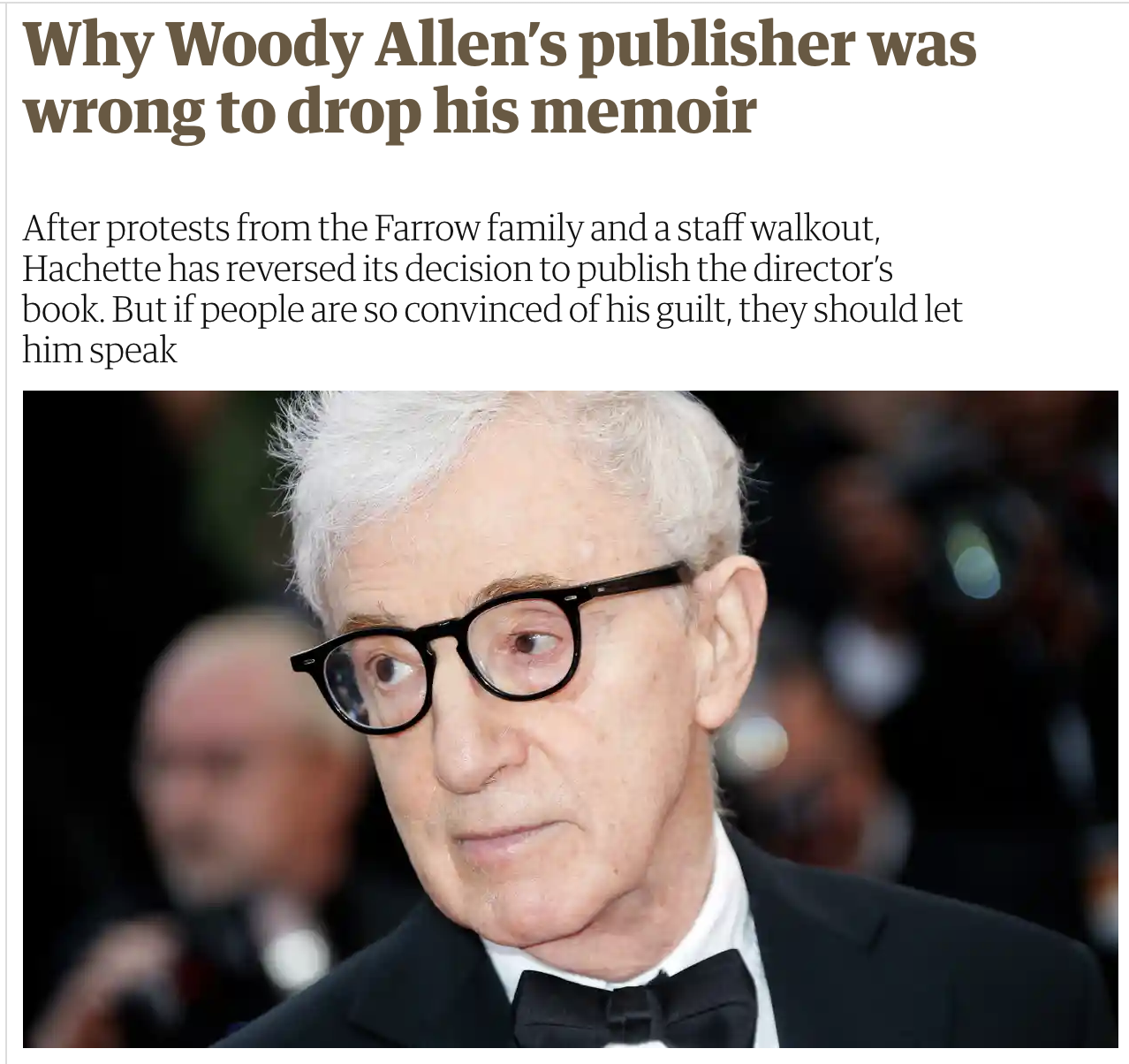 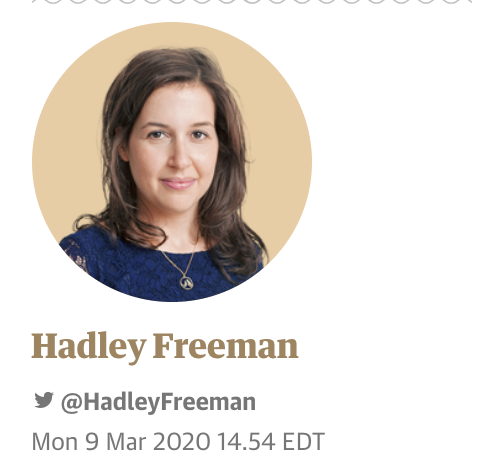 There’s no much here that I haven’t said previously, but this is the Guardian and I have a little-fish website. So it’s good that there’s this opinion out in the mainstream media. A few quotes from Freeman:

One [Hachette} staff member said: “We feel strongly about everyone’s right to tell their own story, but we don’t agree with giving Woody Allen a platform with which to tell it that includes distribution, marketing, publicity.” So everyone is allowed to speak, but only under certain conditions. Hachette ran scared and dropped the book.

It would have been one thing if Hachette had never agreed to publish Allen’s memoir in the first place. Fair enough; that’s a publisher’s prerogative. But for it to sign him, edit him and then fearfully drop him because some people object is a terrible precedent for a publisher to set. As for the Hachette employees who walked out, it is quite something for people who work in publishing to be against the publication of books. After all, if they really are so convinced of Allen’s guilt, they ought to let him speak. When I wrote about the bewildering support in the movie industry for Roman Polanski, despite being a convicted sex offender, I quoted extensively from his memoir, Roman by Polanski. Those passages, in which he described his attack on 13-year-old Samantha Geimer, were probably the most incriminating details in the piece.

. . .But it is absurd to talk about Allen in the same breath as Polanski, let alone Simpson. Too many people now airily refer to Allen as if he were a serial sex offender, but he was not only never convicted, he was – despite being investigated – never even charged. Moreover, unlike Polanski – and Bill Cosby, and Harvey Weinstein, and R Kelly, and Michael Jackson – there has never been more than one accusation. One is one too many, but this one allegation was investigated twice and no charges brought. To talk about Allen as though he is a predatory monster who must be shunned from society goes against even the smallest idea of due process.

You can argue that Allen is a beneficiary of a system that favours the rich and powerful. But you should still want him to publish his memoir because suppressing words, ideas and even people never works in the long run. Let the guilty damn themselves, if guilty they be, and trust the public to see the truth for themselves. Arguing for silence will only work to your disadvantage, because one day the one who will be silenced is you.

I wonder if some day, when my mortal remains are in the clay, people will look back on these times of wokeness as a time of mob hysteria, when those on the Left, once the guardians of free speech, devoted a lot of the time to deciding who would not be allowed to speak.