It’s Thursday, February 20, 2020: only three more days before my week’s R&R&E in Paris. Remember, posting will be very light next week, and access to email restricted, so please try not to email me from Sunday through March 4—unless it’s urgent.

Founded by renowned holiday creators Thomas and Ruth Roy of Wellcat Holidays, this holiday was made to help chase away winter and usher in spring. In the Northern Hemisphere, spring usually begins on March 20, but can start on March 19 or March 21. Thus, the holiday is celebrated about month before the end of winter. A Southern Hemisphere counterpart is celebrated on August 22, about a month before the start of spring in that hemisphere.

I’d rather it be Duck Anticipation Day, it being about a month before my beloved mallard Honey is expected to return.

News of the Day: I didn’t watch the Democratic debate last night, but the news suggests it was a free-for-all. Here’s the first paragraph of the New York Times report:

LAS VEGAS — The Democratic presidential candidates turned on one another in scorching and personal terms in a debate on Wednesday night, with two of the leading candidates, Senator Bernie Sanders and Michael R. Bloomberg, forced onto the defensive repeatedly throughout the evening.

Here’s a sub-header from another article:

Oy! We shall discuss it soon, so, if you watched it, hold your comments.

Stuff that happened on February 20 include:

Here’s Mikkelsen, and a photo of her raising the Norwegian flag on the continent of Antarctica (she was part of an expedition in which Norway was looking for Antarctic land to claim). That’s not exactly Antarctic garb they’re all wearing in the second photo. 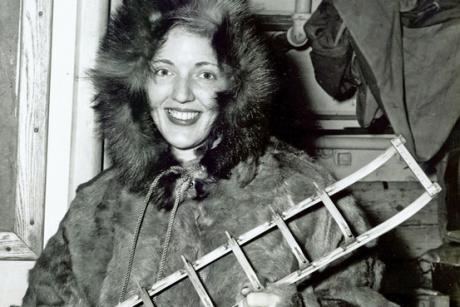 Here’s O’Hare in his Wildcat fighter; each Japanese flag represents a plane shot down, and five planes makes an “ace.” Note the Felix the Cat with bomb emblem, the symbol of Fighter Squadron VF-3 (now VF-31): 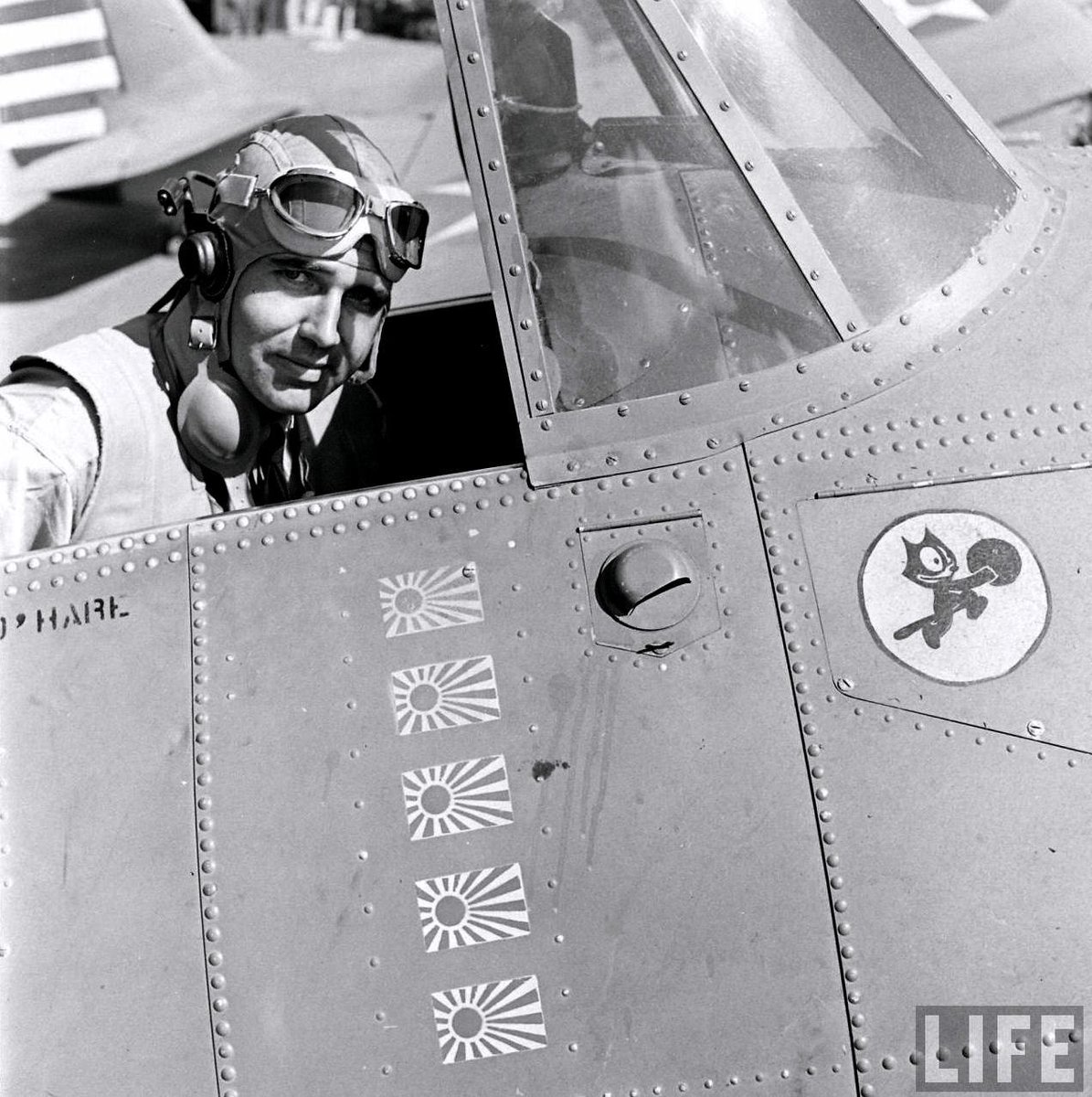 O’Hare airport in Chicago is named for the man, who was killed by a Japanese bomber in 1943.

Here’s the original of that painting, “Freedom of Speech,” which now resides in the Norman Rockwell Museum in Stockbridge, Massachusetts. I took the picture during the “Moving Naturalism Forward” meeting in October, 2012. A free-speech advocate stands beside it: 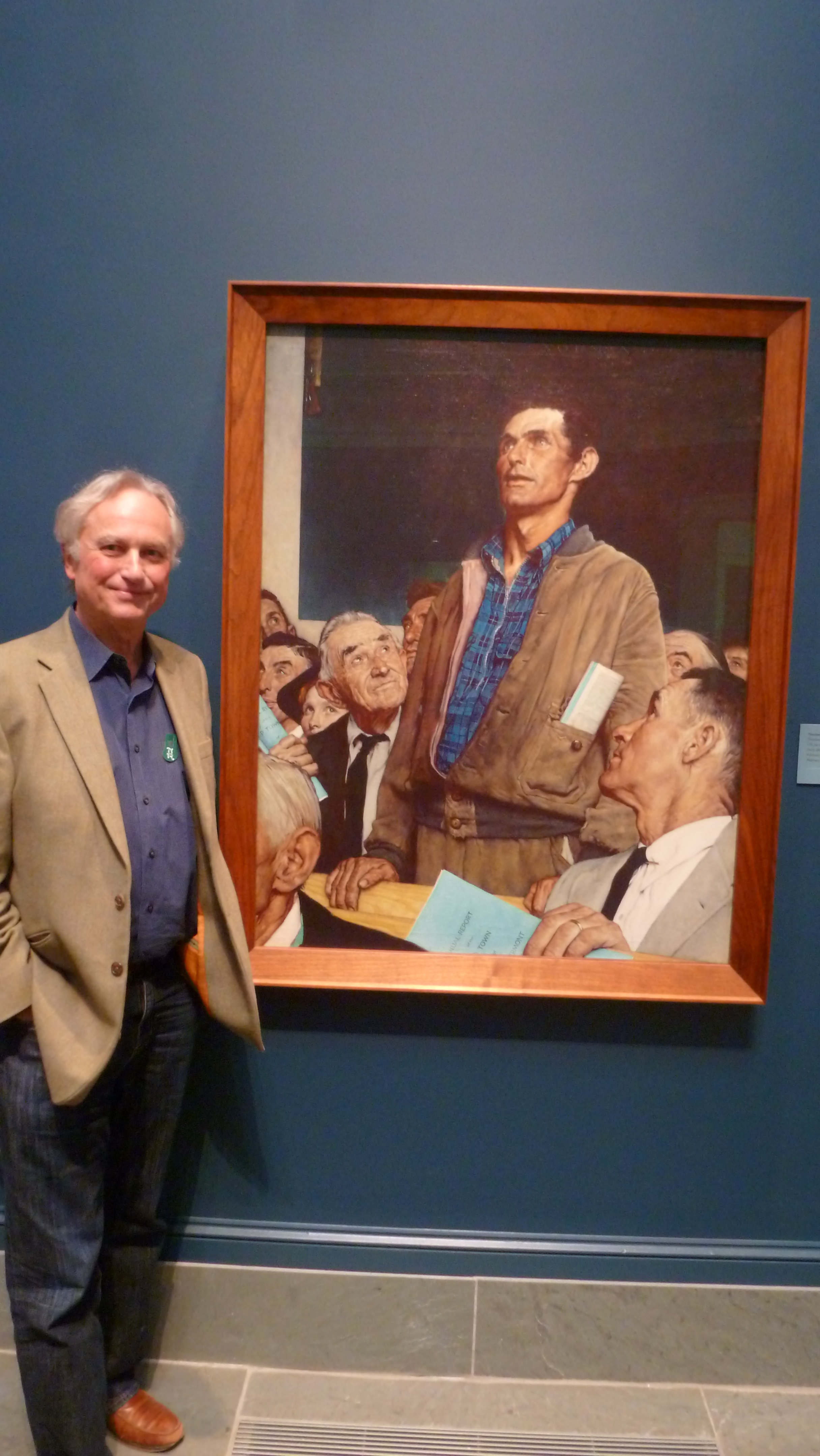 Here’s a short video about Ashford. He started umpiring at 51, and worked four seasons, retiring after the league’s required retirement age of 55.

Those who petered out on February 20 include:

Here’s the gonzo man himself (he shot himself at age 67, and, at his funeral, his ashes were fired from a cannon to the accompaniment of fireworks. 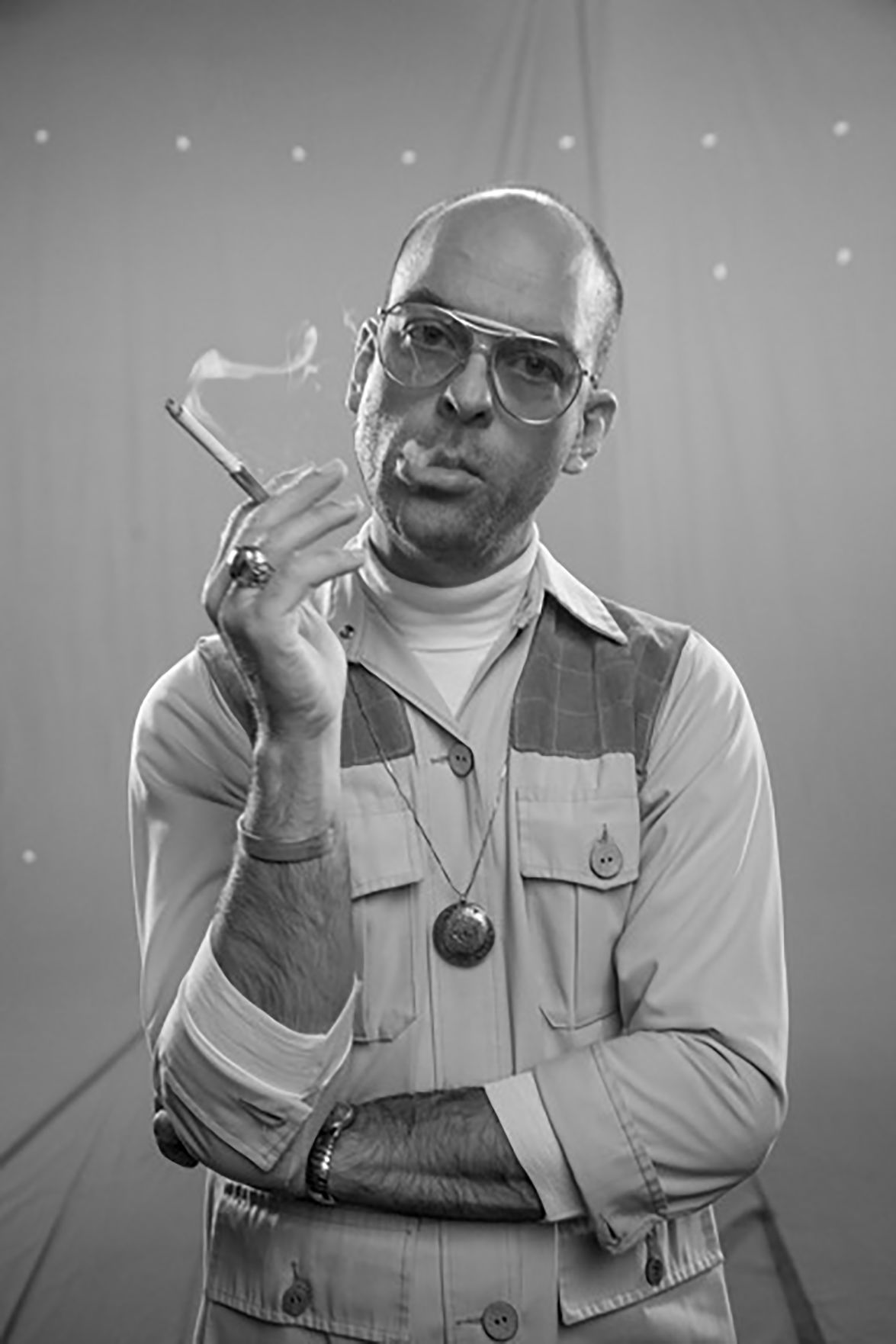 Meanwhile in Dobrzyn, Hili is pensive:\

Hili: Contemplation takes up a lot of my time.
A: And what are you contemplating?
Hili: Whatever I can lay my eyes on. 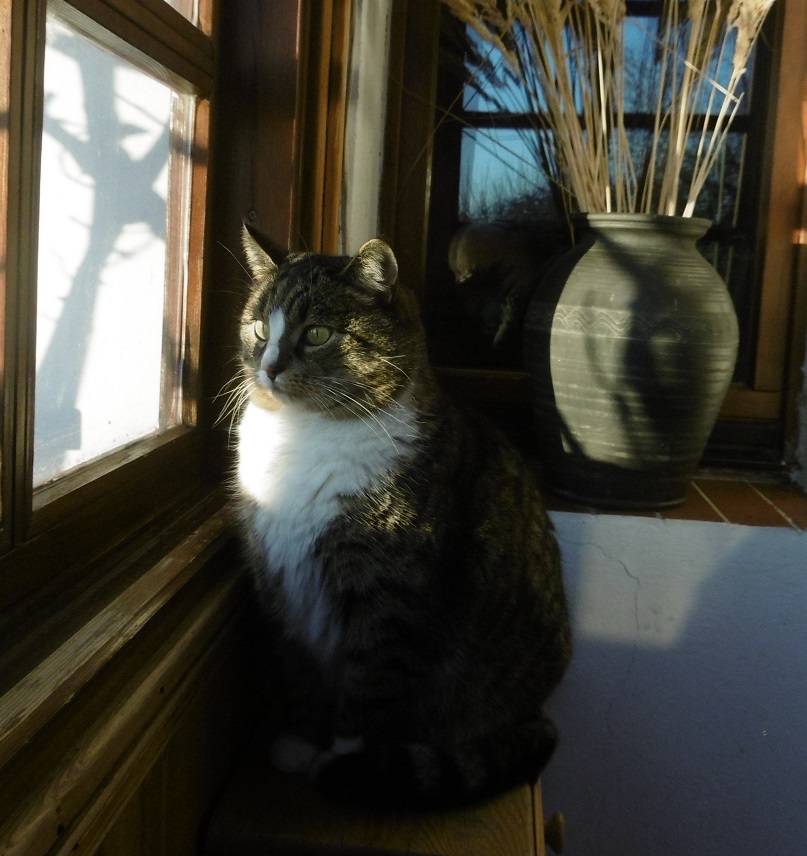 And Szaron, the feral cat who’s in the process of being lured into a Forever Home in Dobrzyn, has stolen the lodger’s breakfast, running away with a pate sandwich in a plastic bag. (There’s a funny video of the theft on Andrzej’s Facebook page.) Here he is: 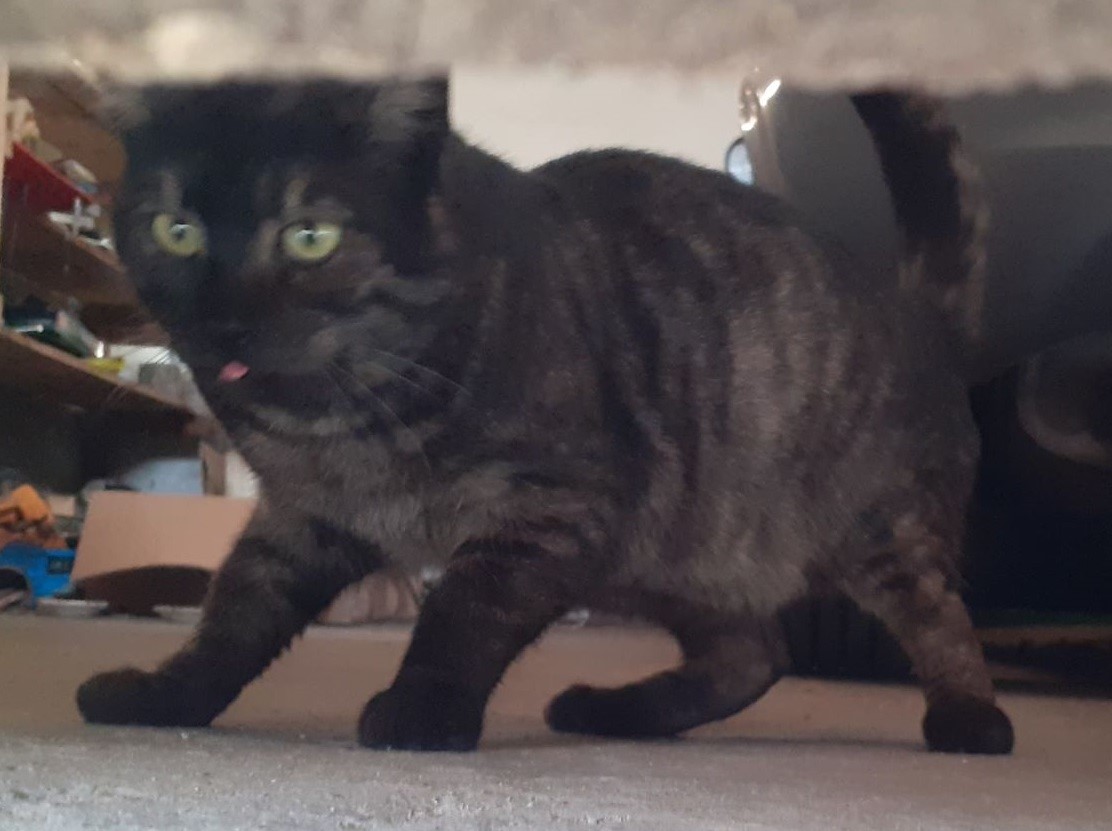 From Vintage Weird, a sign that was apparently at the National Zoo in Washington, D. C. in 1943 (h/t: Krod). The sign doesn’t note that losses could also be incurred there! 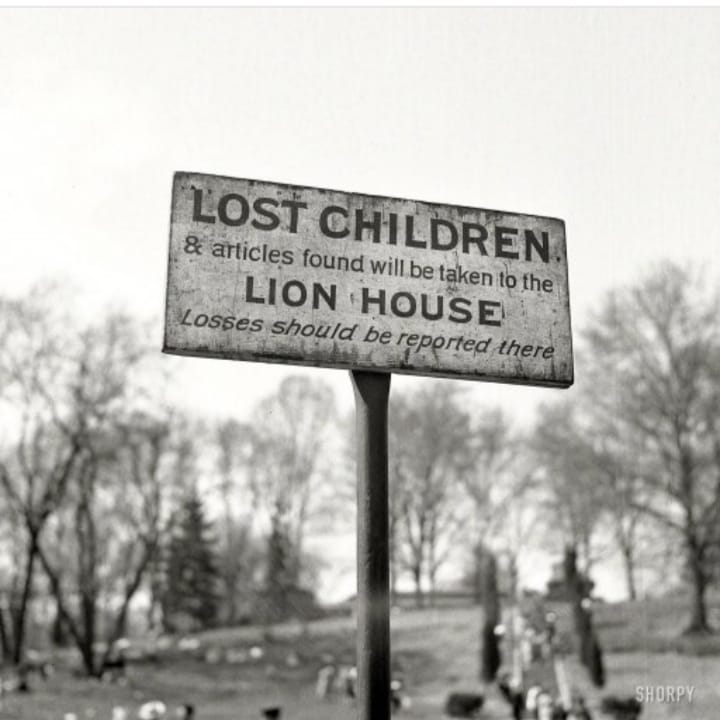 A baby giraffe from Wild and Wonderful: 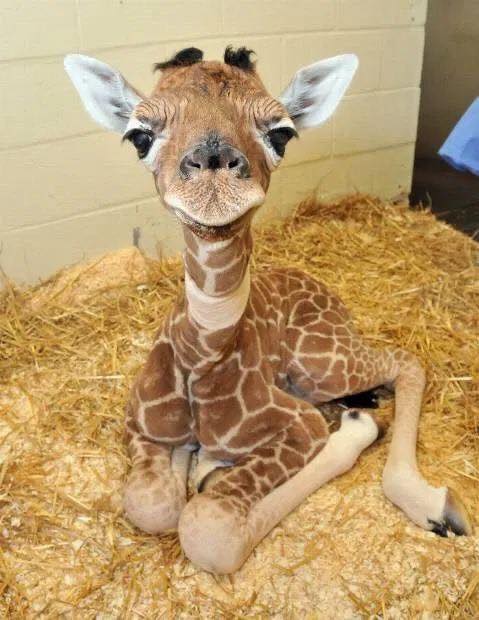 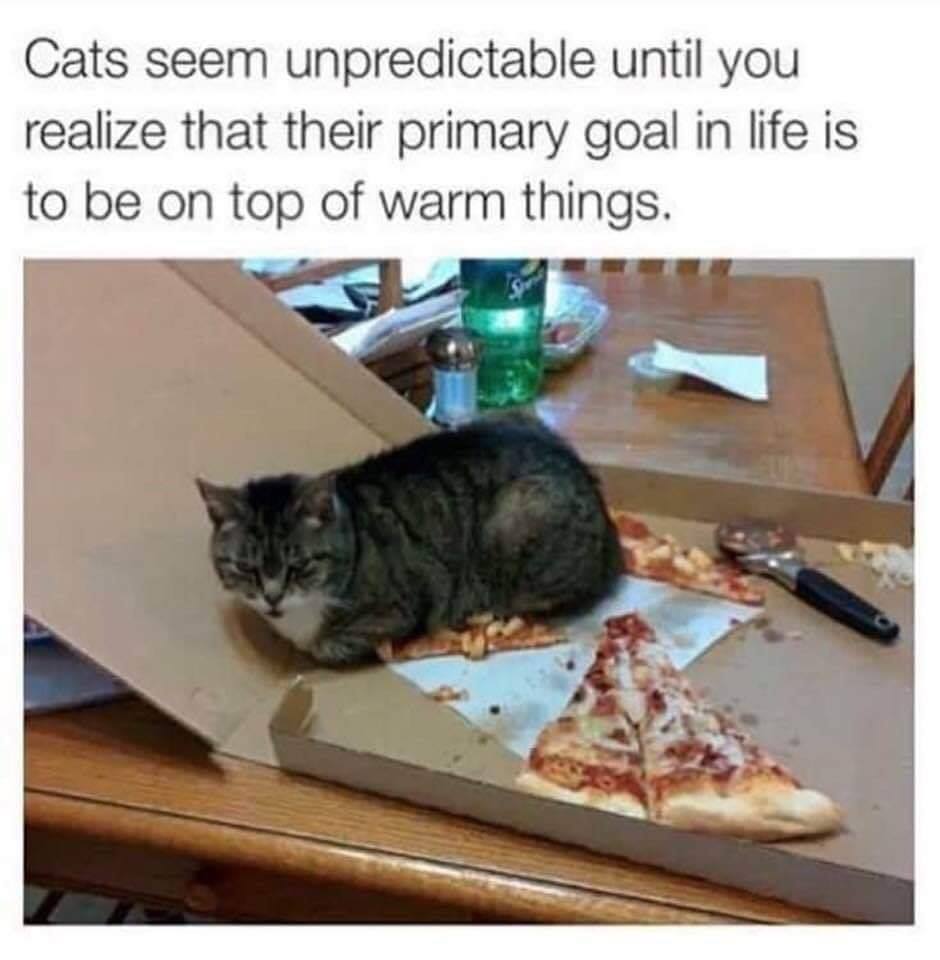 A tweet from Luana. TUNASHAMED! (I had tuna yesterday and oy, and I ashamed! Why didn’t Jesus stop me?)

From Dom. This thing could kill you from above. It’s a cone of the Australian confer Bunya (Araucaria bidwilli), related to the monkey puzzle tree.

Heard this Bunya pine cone falling through the canopy then thud on the ground a few metres in front of us yesterday at Adelaide Bot Gardens. Big, spiky, solid & surprisingly much heavier than I had imagined. pic.twitter.com/rkSpYLqnvT

Two tweets from Simon. First, they did the otter and squirrel genome (two squirrels)!

To celebrate the release of the red #squirrel, grey squirrel and Eurasian #otter genomes by @darwintreelife here are their respective pages from the @sangerinstitute 25 genomes book, with a little information about each animal and how knowing their genome could be useful pic.twitter.com/7VHUhulJIi

And here’s another release of the squirrel genome. I think you’ll guess early on what’s gonna happen. (Sound up by all means!)

I was not expecting that to happen I literally scared the shit out. #squirrel pic.twitter.com/BnEWj93gBW

A tweet from Heather Hastie. Hard to believe there are men like this around, or at least men who aren’t Amish or conservative Mormons.

Hey ladies, GUESS WHAT?! Apparently, if we don’t have men giving us boundaries and telling us our place, WE ARE TOTES THANOS! WHERE MY INFINITY STONES AT?! pic.twitter.com/AZkxHWF49D

Tweets from Matthew. Octopus see, octopus do. This is really lovely.

Improvised behavioural mimicry is intelligent by any standards, I'd say.
from https://t.co/V9rw4gHpOm pic.twitter.com/gj6TVByjxr

This is fricking amazing! What a lot of work, but he got a healthy chick!