Well, Her Highness has a short summary of the worst aspects of 2019 in The Critic (click on screenshot). By “worst”, of course, I mean that the year was packed with incidents that offended the faux wokeness of Ms. McGrath (if that’s her right pronoun). 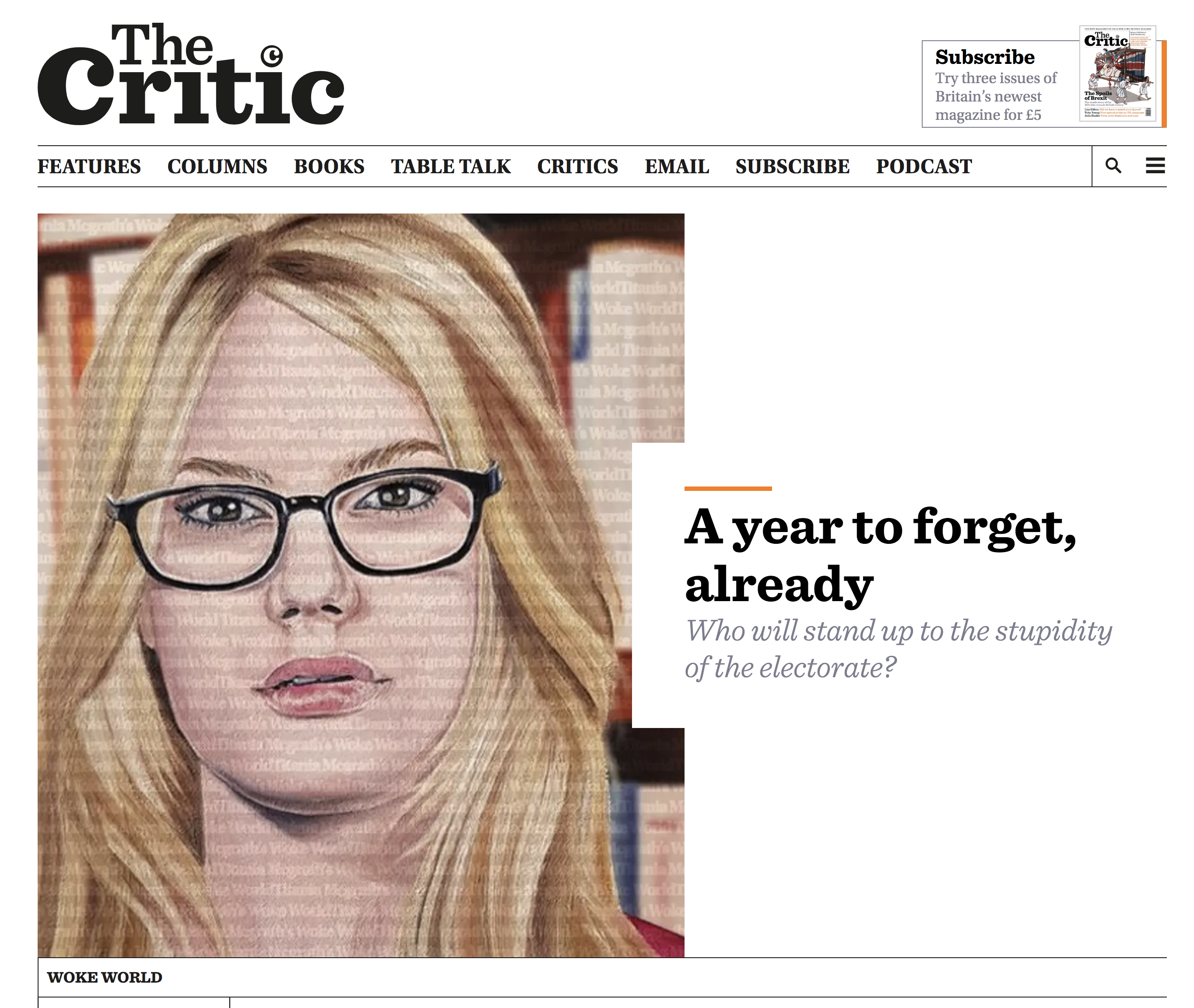 An excerpt from her litany of 2019’s outrages:

We all thought that 2019 was the worst year in human history thus far. We were wrong: 2020 is already turning out to be an utter disaster for social justice. On New Year’s day I had the misfortune of seeing Toy Story 4 with my seven-year-old niece (formerly my nephew) at my local cinema.

I was shocked at the lack of diverse representation, and even more shocked to see that there were people of colour in the audience who appeared to be enjoying themselves. I later read an article in the Hollywood Reporter by a middle-class white journalist which explained to minorities why they ought to be offended by this film, so that made me feel a little better about the whole thing.

But worse was still to come. On the second day of January the US government — rightly described as a “terrorist regime” by oppressed millionaire actor Rose McGowan — killed Qasem Soleimani in an air strike. Soleimani (described by the Washington Post as Iran’s “most revered military leader”) is the latest US assassination since that of Isis leader Abu Bakr al-Baghdadi (described by the Washington Post as an “austere religious scholar”). In the case of al-Baghdadi, an army dog was awarded a medal of bravery for his role in the operation, which just goes to show that even American dogs are Islamophobic.

If you want to see that social-justice critique in the Hollywood Reporter, click on the screenshot below (Stephen Galloway is Caucasian, like the fork he decries): 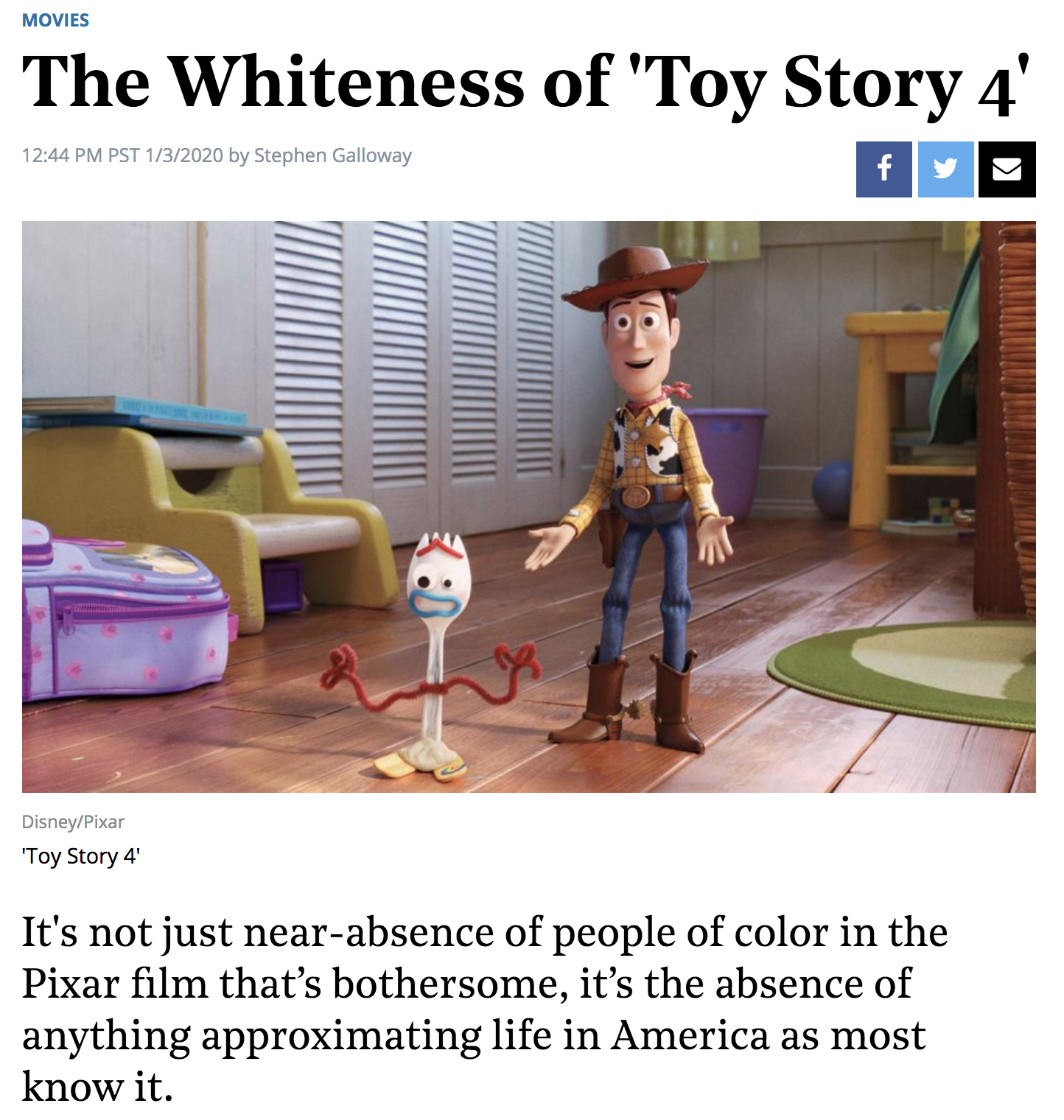 An excerpt; (my emphasis):

True, there are a few characters of color (including two supporting players voiced by Keegan-Michael Key and Jordan Peele); but each of the leads is Caucasian, and not just the franchise regulars but a host of new ones including a very white fork (Tony Hale) that’s among the more memorable — and merchandisable — creations of this fourth iteration in the series.

As Matthew Cherry, the African American director of animated short Hair Love, recently told The Hollywood Reporter: “When you don’t see yourself represented and you don’t see people with your same type of hair seen as the hero and seen as loving and desired, it really does a number on your self-confidence.”

Nor is it just the near-absence of people of color that’s bothersome. It’s the absence of anything approximating life in America as most of us know it.

TS4’s main family lives in a big, brightly lit house in an ivory utopia; its daughter sleeps in a plush room packed with a U.S. Treasury’s worth of gizmos; they drive around in a gas-guzzling RV, stopping for carnivals and carnies that would be right at home in the 1940s or 1950s. Problems of prejudice, money and unemployment never seem to cross anyone’s mind.

Yes, a true Pecksniff can find anything “problematic.”

Speaking of Titania, her creator and alter ego—comedian Andrew Doyle—has a new piece in Spiked in which he distinguishes between the good kind of wokeness, of which he and I approve, and the bad kind, which is what I mean when I refer to “woke” in my regular posts. Click on screenshot: 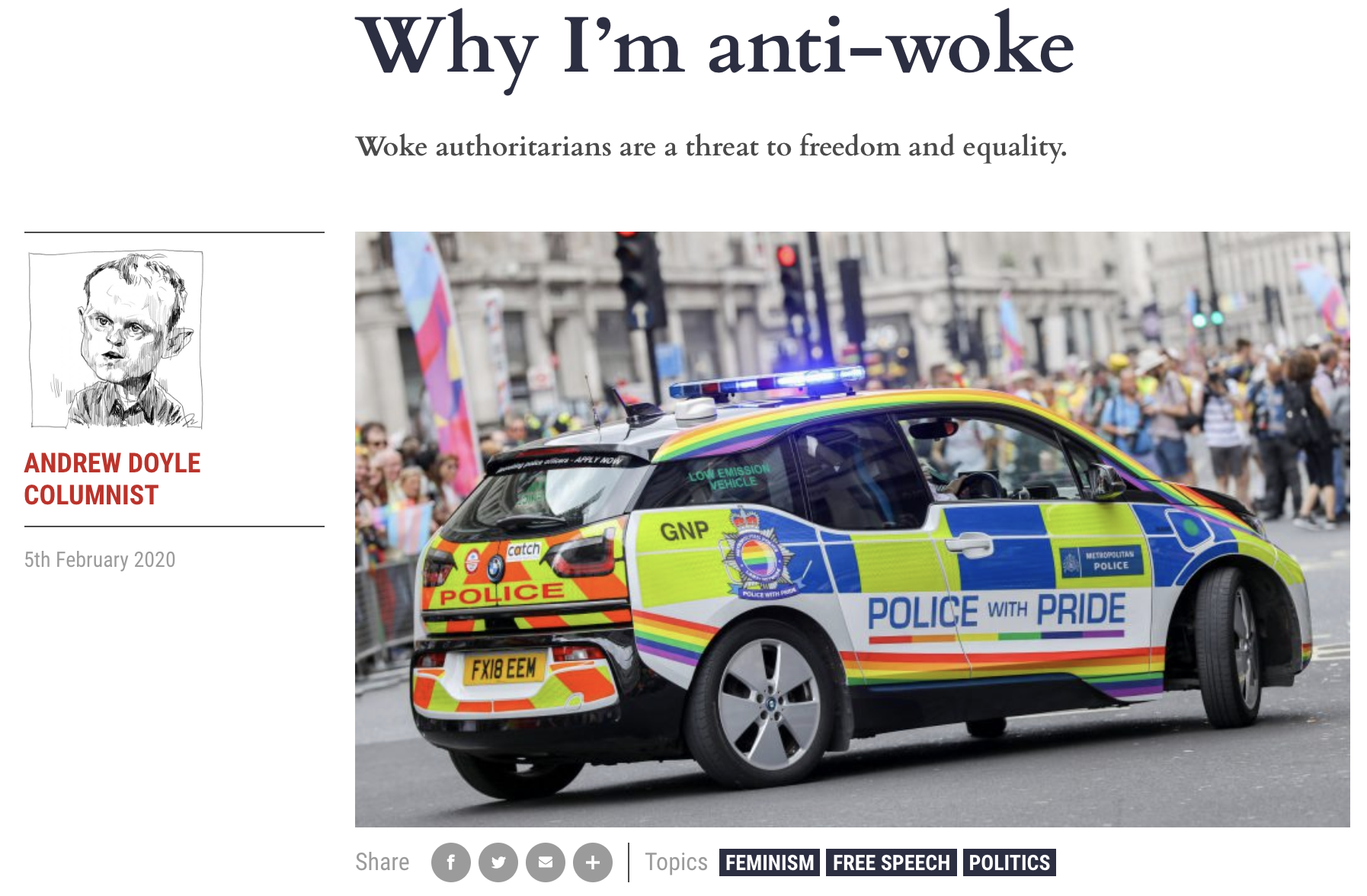 During 2019’s Last Night of the Proms, the audience was treated to a rendition of Daniel Kidane’s latest composition, ‘Woke’. Kidane had written the piece because he was concerned that the word had veered from its earlier definition – that is, to be ‘alert to injustice in society, especially racism’. This was how the word was understood when it originated in the various black civil-rights movements of the 20th century. If this is all it means to be woke, then count me in.

Unfortunately, over the past few years the term has been appropriated and sloganised by the cult of social justice. ‘Woke’ is no longer simply a matter of standing up to racism, but is irrevocably connected to the authoritarian mindset of the identitarian left. Rather than confront bad ideas through discussion, debate, ridicule and protest, those who self-identify as ‘woke’ would sooner intimidate their detractors into silence through what has become known as ‘cancel culture’. More insidiously, they have sought to empower the state and strengthen hate-speech laws, which curb individual freedom. They do all this in the belief that theirs is a righteous cause, but their illiberal actions ultimately bolster the very ideas they purport to despise.

According to Doyle, the characteristics of bad wokeness are these (this is my take on his views melded with a few of mine):

1.) An avoidance of discussion about controversial topics like affirmative action or trangender issues by using two methods: authoritarian dictates about the “correct” position that cannot be contravened, and social-media attempts to destroy those who contravene those dictates. Another word for the latter is “bullying”.

2.) A general opposition to free speech as it is construed by the First Amendment and interpreted by the U.S. courts. This often comes as “I like free speech, but. . . ” arguments, which often mention “hate speech” as an exception.

4.) Finally, and here I use Doyle’s words, “Indeed, the labels ‘racist’, ‘misogynist’, ‘homophobe’, ‘transphobe’ and ‘fascist’ – extremely serious allegations that should only be used when there is incontrovertible evidence to support them – are now so promiscuously applied that they have lost their impact. This not only provides cover for the far right, but also actively promotes the worst people in society by creating an illusion of widespread crypto-fascism.”

The whole tenor of bad wokeness is to stifle and intimidate opponents of views that you consider so true, so ideologically perfect, that no dissent can be brooked. It’s an end run around free speech, and that’s the main reason I dislike it. Further, I do believe that bad wokeness is liable to help hand a Presidential victory to Trump this November. I hope not, but the craziness of some Leftists doesn’t hurt him! (Even at HuffPost, a Bad Woke rag, you can read the comments of people who are politically offended by Bad Wokeness.)

Finally, Doyle mentions the following book to which I want to draw your attention (click on the screenshot to go to the Amazon site). Pluckrose and Lindsay were, of course, two of the three people who created the “grievance studies affair“, which now has its own page on Wikipedia.  It’s only $20 for a 340-page hardcover. 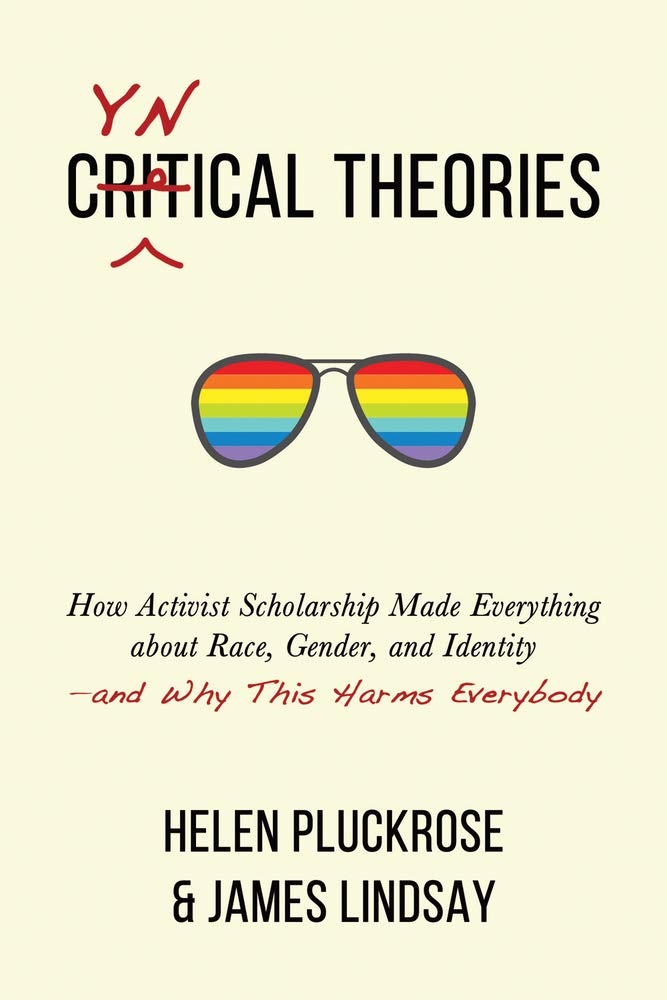 Have you heard that language is violence and that science is sexist? Have you read that you shouldn’t practice yoga or cook Chinese food? Are you confused by these ideas and wonder how they have managed to challenge so quickly the very logic of Western society? In this probing and intrepid volume, Helen Pluckrose and James A. Lindsay document the evolution of this dogma, from its coarse origins in French postmodernism to its refinement within activist academic fields. As Pluckrose and Lindsay warn, the unchecked proliferation of these anti-Enlightenment beliefs presents a threat not only to liberal democracy but also to modernity itself. Only through a proper understanding of the evolution of these ideas can those who value science, reason, and consistently liberal ethics successfully challenge this dangerous and authoritarian orthodoxy.

11 thoughts on “Two pieces and a book on wokeness”