Okay, I took the bait and am now reading Philip Goff’s trade book on panpsychism, Galileo’s Error: Foundations for a New Science of Consciousness. (Why do I let myself repeatedly fall victim to the Courtier’s Reply? I am a sucker.) It hasn’t convinced me so far that matter is somehow conscious, and yet there seem to be a fair number of people who buy into what is essentially a form of religion, since there’s no evidence for panpsychism, its propositions are bizarre, and yet the belief remains fervent. (Some of its adherents, like Goff, also claim that their theory, like religion, vouchsafes us a new form of reassurance and joy.)

And I can’t tell you how many angry and nasty emails and comments I’ve gotten from people who revile me for criticizing panpsychism—all of which convinces me even more that it’s a form of religion. Many of these comments and emails strikingly resemble those I get from religious believers who damn me for going after faith.

And one of the signs of a desperate faith is the claim that belief in your faith is spreading. When you see a statement like the one in the penultimate sentence in this screenshot, you may suspect that you’re dealing with woo (p. 23 from the book). You hear the same kind of claim from Deepak Chopra and from Rupert Sheldrake: 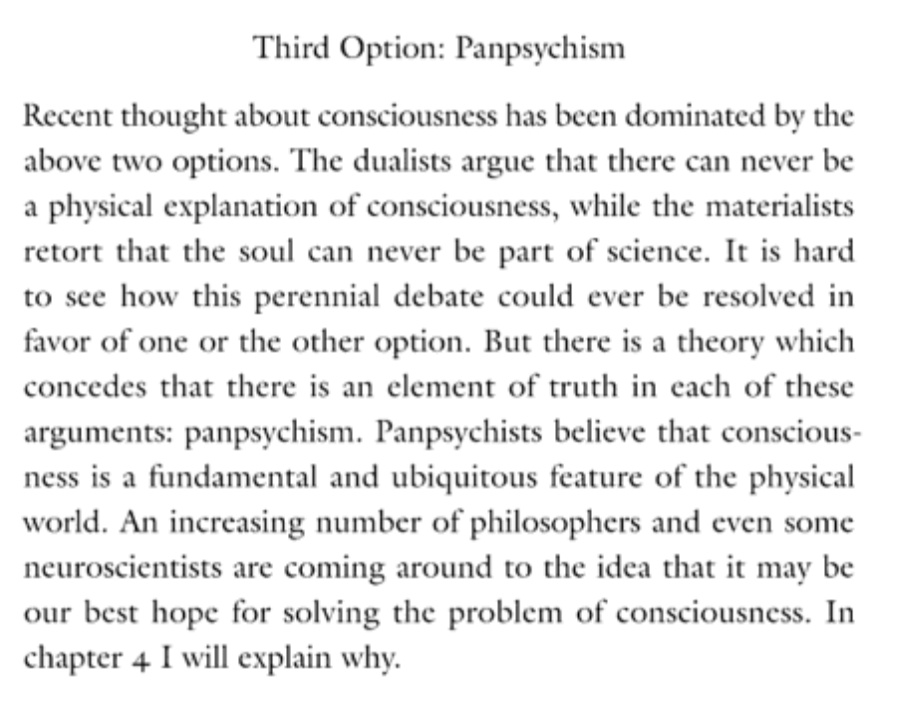 I’m not sure whether I’ll engage further with this form of woo, as it’s like fighting with Ken Ham: panpsychotics are true believers. But I do predict that the idea will die, and in the future people will wonder, “why did they ever entertain such a crazy notion?”

In the meantime, I’m still wondering why people who seem to have a respectable titer of neurons do entertain it. The attraction mystifies me. Why not say that all matter, from electrons and rocks on up, is alive and therefore life (whose origin we still don’t understand) is simply what happens when a combination of “living” inorganic atoms get together in a body? No need to explain the origin of life—it’s already part of everything in the universe!

I’m steeling myself for another onslaught of opprobrium, but I have a fine Bordeaux to drink tonight.

UPDATE:  The termites have already started chewing: here’s a comment that won’t appear:

UPDATE: Readers pointed out that the comment above may actually be a joke about panpsychism. I was too obtuse to see that, so I take back my disapprobation, and have removed the person from moderation. My bad.

But there are lots of other past comments and emails that simply cannot be interpreted charitably at all.

115 thoughts on “A philosophical red flag”