It’s a Hump Day: Wednesday, February 5, 2020. It was a cold and windy day in Chicago yesterday, though a mallard drake and two hens landed in the pond for a few hours and had a nap. Tomorrow we may get several inches of snow—enough to require plowing. But we’re tough in the Midwest, and it takes a lot of snow to disrupt us. See?: 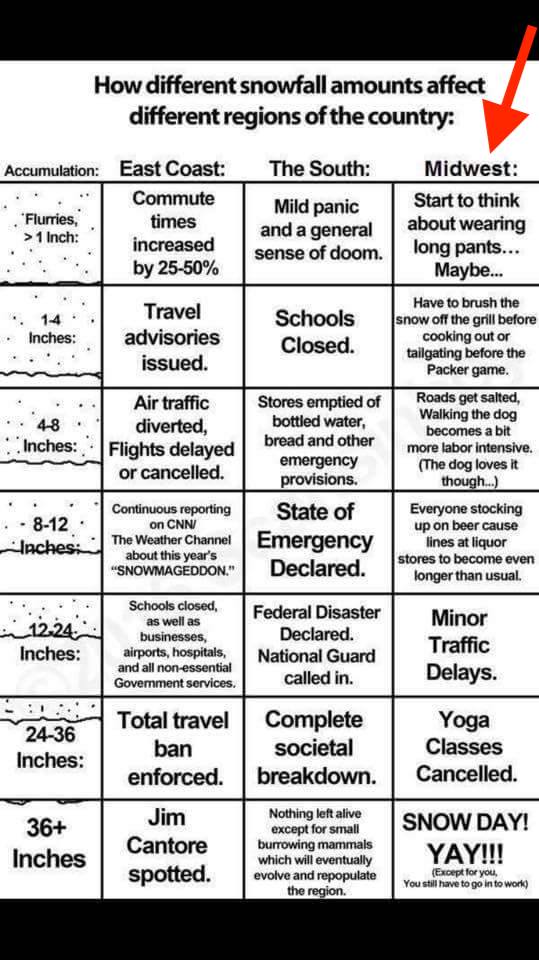 It’s National Frozen Yogurt Day, National Chocolate Fondue Day, and World Nutella Day. About a year ago, having never tasted the stuff, I bought a jar of Nutella. I finished it, but didn’t become a big fan: the stuff was simply too cloying. I still don’t understand why it’s so popular around the world.

On the non-food front, it’s California Western Monarch Day, roughly marking the time when Monarch butterflies arrive en masse to roost and mate in trees along California’s central coast, National Shower with a Friend Day, and National Girls and Women in Sport Day.

Many Monarchs overwinter in Pacific Grove California, designated an official Monarch Sanctuary. Here’s how they cluster. After they mate, they leave in March for their migration, one of the marvels of nature. 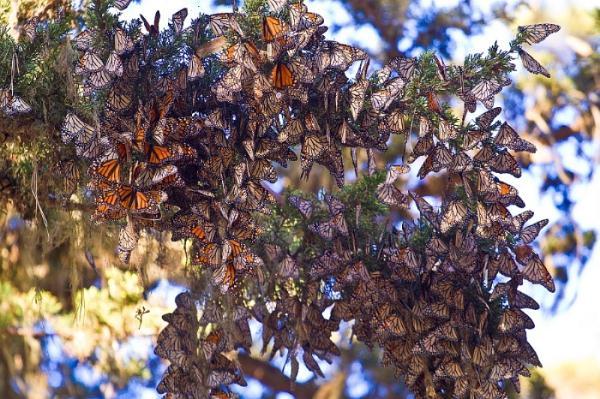 News of the Day:   Not being able to listen to Trump any more, I didn’t watch last night’s State of the Union address. Apparently Trump didn’t mention impeachment, which is what I expected. CNN gives this headline to its report on the speech: “Donald Trump’s theatrical State of the Union prompts partisan outrage.” Their report included this, which is very sad:

When House Speaker Nancy Pelosi — with whom Trump hasn’t spoken in months — extended her hand to greet the President, he turned away and left her hanging. She smiled broadly as she glanced toward her Democratic caucus and shrugged.
As the speech wore on, Democratic members of Congress sat mostly silent even as their Republican colleagues stood and cheered. Some even rose to walk out at various intervals. And when the President concluded, Pelosi could be seen on camera stoically ripping up the pages on which Trump’s speech was printed.

We are terminally polarized.

Finally, here are the latest results of the Iowa caucus from the New York Times, reaffirming the earlier ones. Let us on the Left hope that one of these candidates (or Bloomberg) can beat Trump in nine months. (Election Day is November 3).

Stuff that happened on February 5 include:

This did considerable damage to the city, and to Herculaneum, but the Big One—the eruption of Vesuvius—didn’t take place until 17 years later.

The original is gone, and there are no photographs, but here’s a reproduction based on a drawing (to scale) at the time. However, this guy wouldn’t have been able to lift it like this, as it weighed 214 pounds (see below)

And some information from Wikipedia:

The Welcome Stranger is the biggest alluvial gold nugget found, which had a calculated refined weight of 97.14 kilograms (3,123 ozt). It measured 61 by 31 cm (24 by 12 in) and was discovered by prospectors John Deason and Richard Oates on 5 February 1869 at Moliagul, Victoria, Australia. . . Deason, Oates, and a few friends took the nugget to the London Chartered Bank of Australia, in Dunolly, which advanced them £9,000. Deason and Oates were finally paid an estimated £9,381 for their nugget, which became known as the “Welcome Stranger”. At August 2019 gold prices, it would be worth US$3.4 million [2.3 million GBP]. [JAC: See more here.]

Very few births and deaths of famous people occurred on February 5. Notables born on this day include:

Notables who met their demise on February 5 were few, and include:

Meanwhile in Dobrzyn, Hili is thinking about evolution. (Malgorzata assures me that Hili thinks humans are beautiful, but not as beautiful as cats.)

Hili: Is it true that we had common ancestors?
A: Yes.
Hili: They must’ve been beautiful. 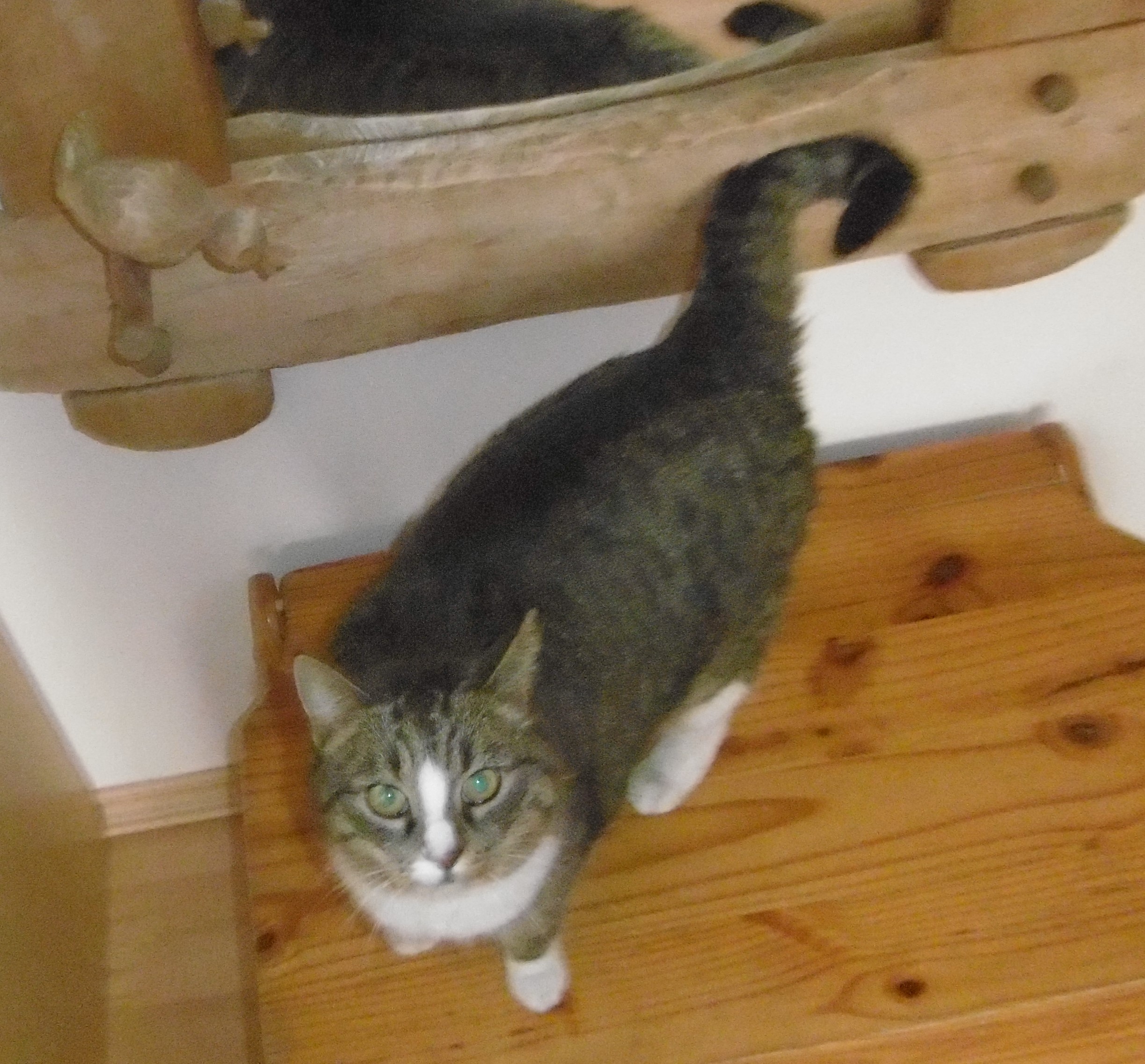 And look! Here’s one of Matthew’s three cats. This one’s Ollie, who bit me in the nose, drawing copious amounts of blood, when I visited Matthew in Manchester (the other two are named Harry and Pepper). I was trying to nuzzle Ollie at the time, but Matthew says I was “looming”. He adds that Ollie is a bit dim, but I think he’s cute, even if he did tear my nose to shreds. 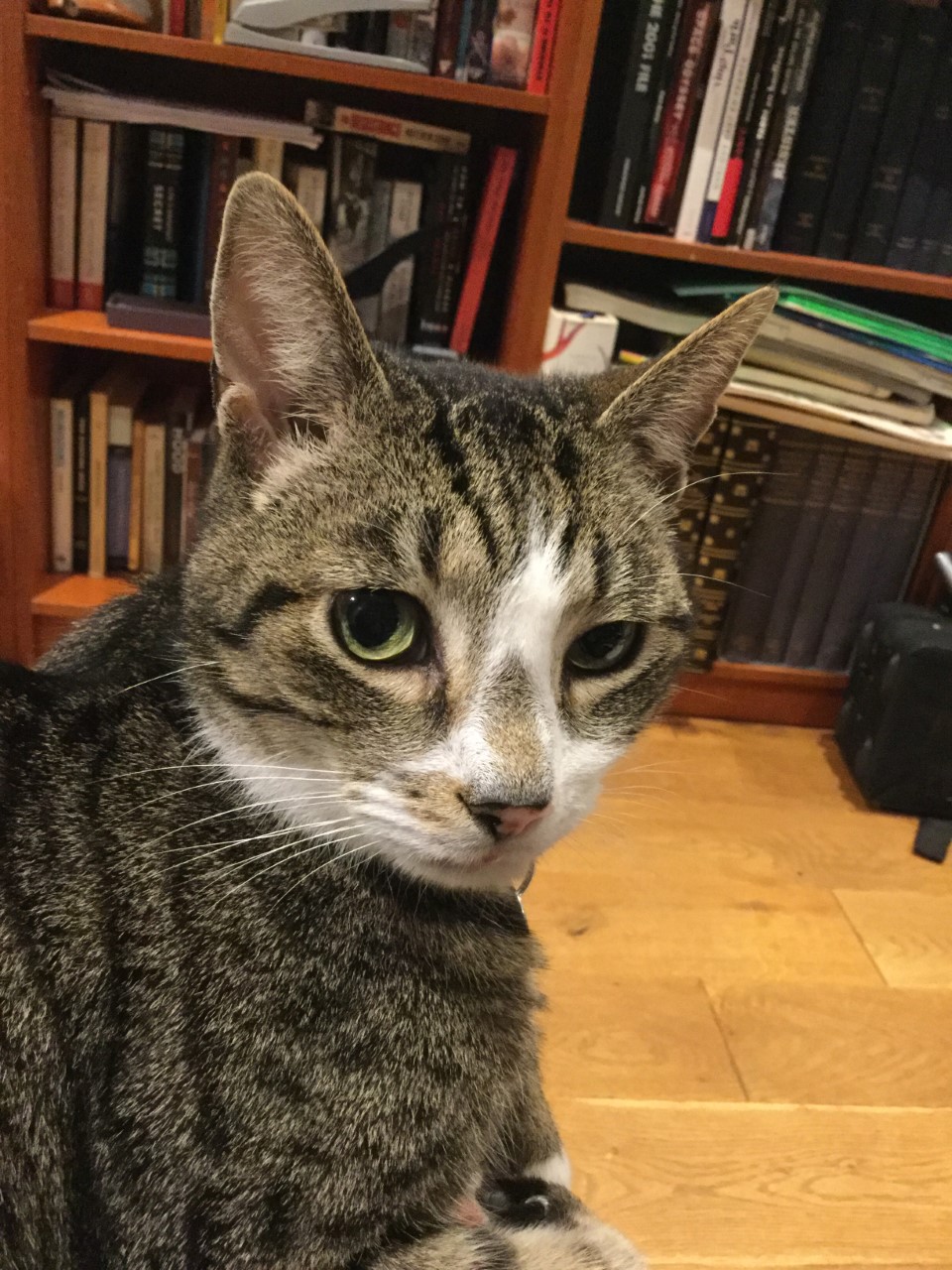 From reader Divy (who owns two cats, a d*g, and many reptiles): 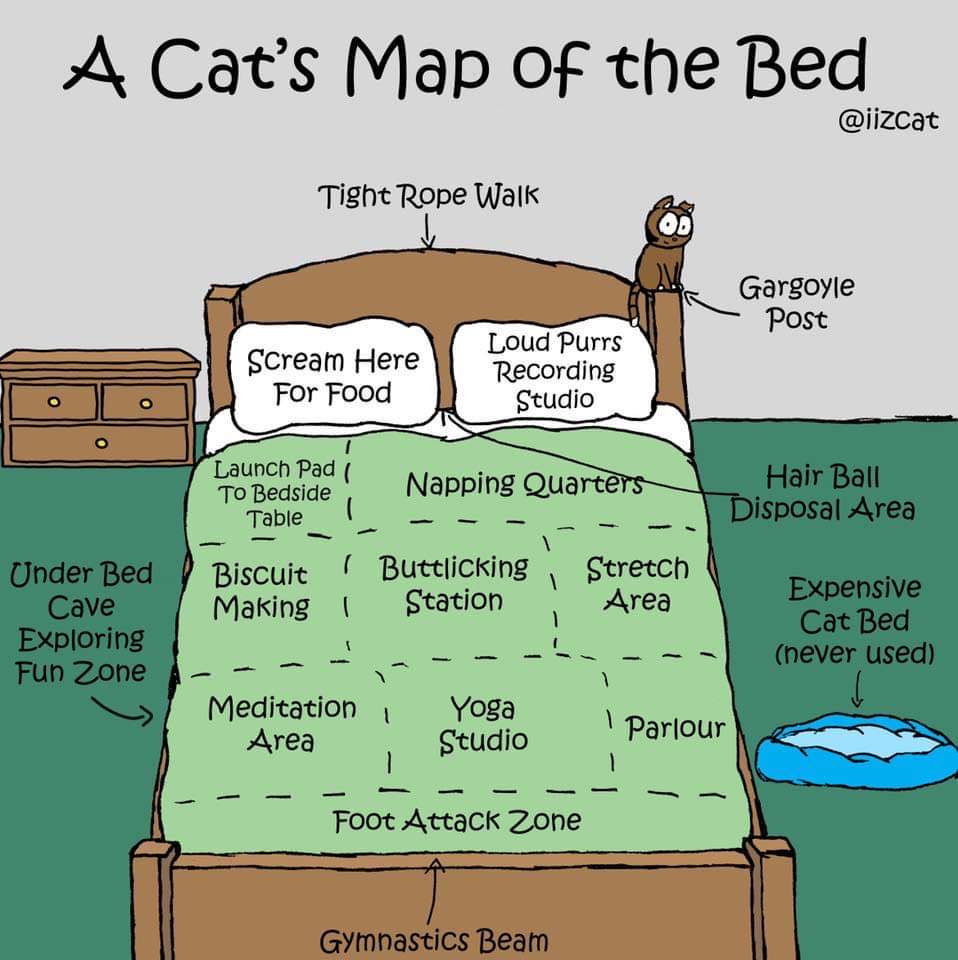 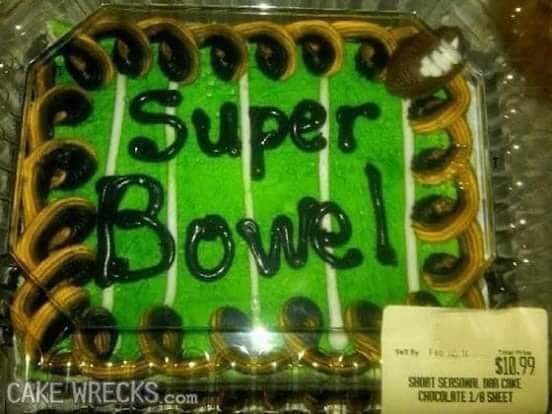 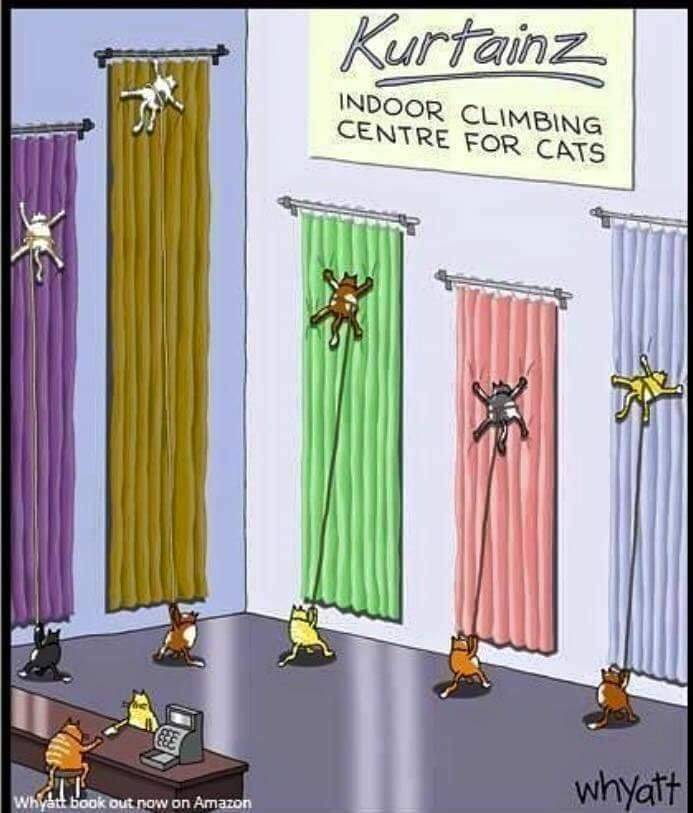 A most beautiful black cat, and friendly as well!

A tweet from reader Dom, who was surprised (as was I) that coyotes and badgers hunt together. How does that work?

A coyote and a badger use a culvert as a wildlife crossing to pass under a busy California highway together. Coyotes and badgers are known to hunt together.

From reader Barry: really bad animals. My favorite is the one of the seal dragging that woman into the water.

Tweets from Matthew. Here’s some good animals. Recognize the chick in the first tweet? And there’s a loving chicken in the second, something I haven’t seen.

Matthew notes here that many insect orders arose in the Jurassic. The caption says it all:

This freaks me out—seriously. It didn’t eat for seven years? Read the linked article.

Not moving for SEVEN YEARS just 'cause. https://t.co/VqVgmbg9qT 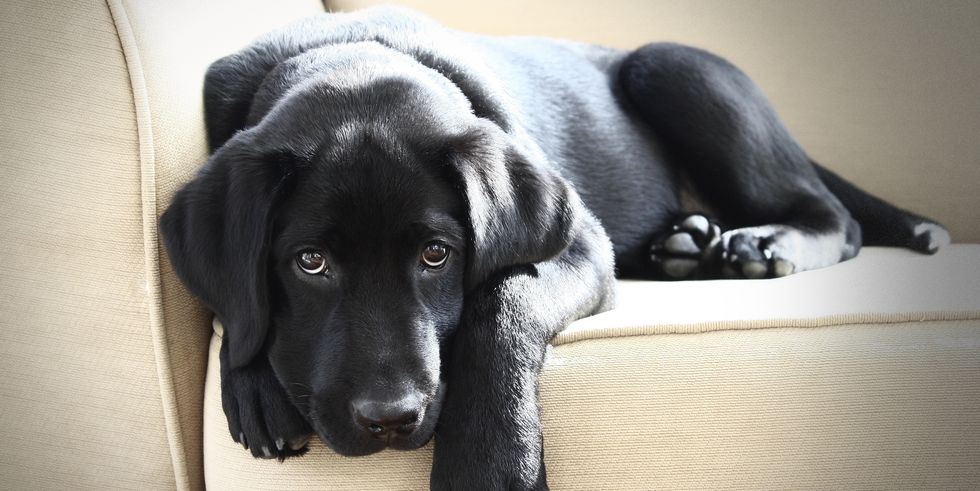