If you like quizzes, you might want to see this one at the New York Times, though it’s pretty lame. It’s not one that you can get graded on, but a series of 35 question (with clicks for the “reveals”), asking how much you know about the primaries, the caucuses, how and when you should vote, who’s ahead, and, at the end—where it gets really lame)—”Are we going to be o.k.?” and “When is this all over?”. Sure, maybe those are lighthearted questions, but they’re dumb. Click below if you want to inflict more politics on your beleaguered carcass:

Here’s question 11 with the reveal, though of course it’s way early in the election to prognosticate about winners: 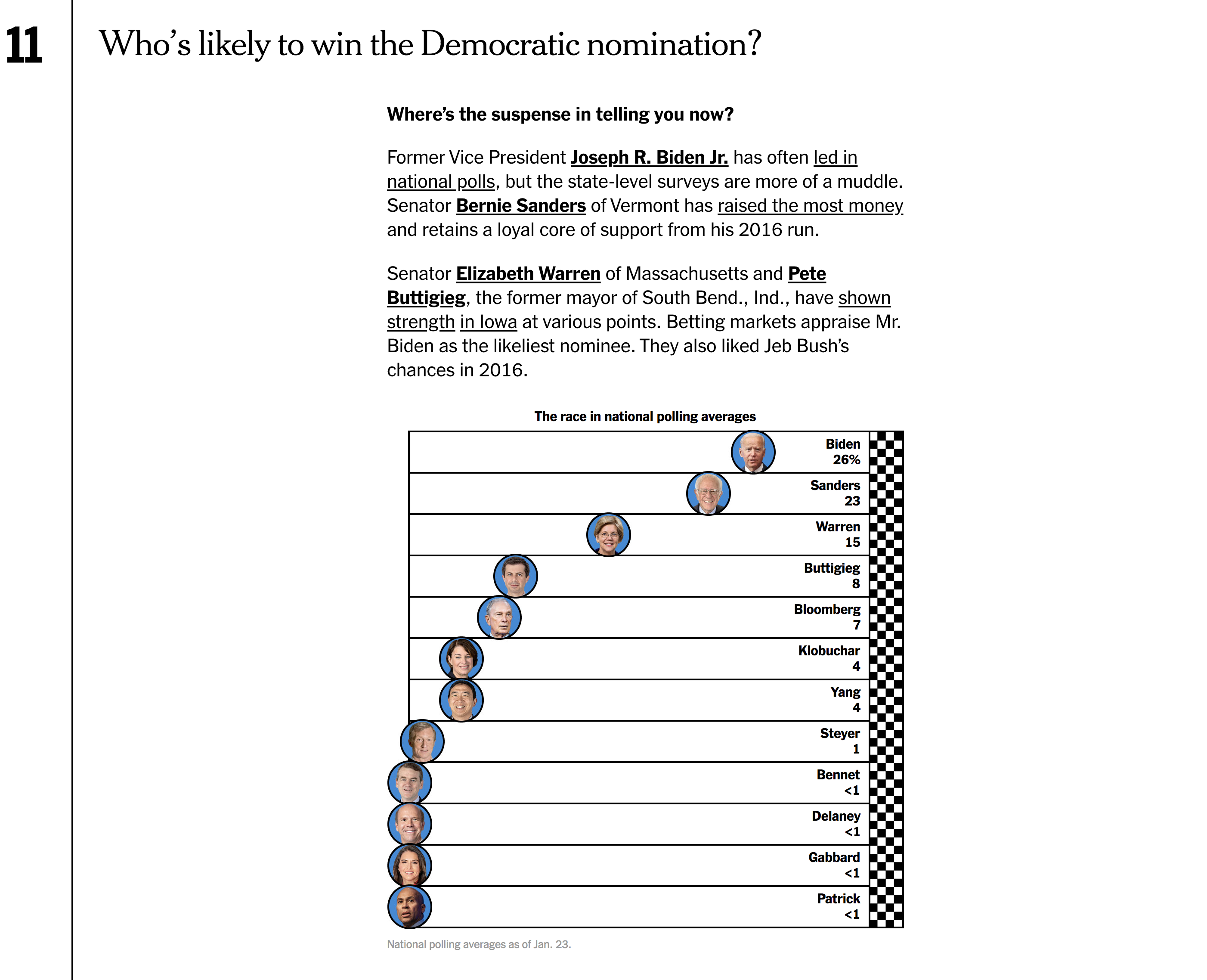 At least it’s an interesting race, with a centrist in a narrow lead, followed by a socialist and then a progressive, with all the rest bunching up below 10%. When I took the “which candidate best aligns with your views?” survey last week, my top three, in decreasomg order, were Yang, Biden, and Bloomberg, making me a centrist, and my bottom three were (in decreasing order) Gabbard, Warren, and Sanders. Lately Biden and the Bern have been pulling ahead of Warren, but we’ll see what happens in Iowa and New Hampshire.

In my view, we have to go for electability, and so, given the choice between Biden and Sanders, I’d prefer Biden, who, I think, has the best chance of exterminating the rats from the White House. That was also the view of Jim Messina, Obama’s former campaign manager and Deputy Chief of Staff for Operations, who said on MSNBC, as reported by MEDIAite:

Senator Sanders’ recent surge in some polls appears to be alarming some Democrats like Messina, who appeared on Thursday morning’s edition of MSNBC’s Morning Joe to discuss a recent survey of young voters that shows Sanders with huge leads over his Democratic competitors and Trump.

Messina pointed out that young people are historically less likely to vote, but conceded that if millennial voters turn out in large numbers, “it will change the electoral math.”

But he argued that Sanders’ emphasis on programs like free college tuition is “a message I think is gonna get him killed” in the general election.

“I think he’s the worst candidate in a general election for exactly that reason,” Messina said.

“I don’t think there’s a question about it,” Messina said, adding, “I think it is clear to me, with these swing voters I care about, the Trump — Obama voters in midwestern states, Bernie Sanders is not the candidate we need to beat Donald Trump in November.”

This, too, was the opinion of NYT op-ed writer David Brooks, who enumerates a number of Biden’s strengths in a piece today (click on screenshot):

I will of course be voting for the Democratic candidate for President, but my vote in the primaries is still up for grabs. The fact that makes the campaign interesting so far is that the most electable Democrat isn’t aways the one that most of us want to see as President. (Although my views align more with Biden than Warren, I would probably still prefer to see her in the Oval Office were I to have a magic wand.) But if Biden gets the nod, I sure hope he picks a more progressive vice-president, one like Stacey Abrams (or Warren, who won’t accept the second-tier slot). We need a Democrat in the White House badly, and one of the main reasons is that Ruth Bader Ginsburg isn’t going to live forever.

We have a long way to go, but it gives us something to argue about until November.

52 thoughts on “NYT quiz on the primaries”