UPDATE: As evidence that the Times knew it was infecting its journalism with opinion, they’ve changed the headline in the last two hours. Here it is now:

Opening my New York Times website this morning., I found this article as the banner headline, which isn’t supposed to be opinion but news (click on screenshot to read it). I was pretty appalled to find that the headline—which one might expect to find in Salon or HuffPost—was in the NYT. Click on screenshot to see the piece. 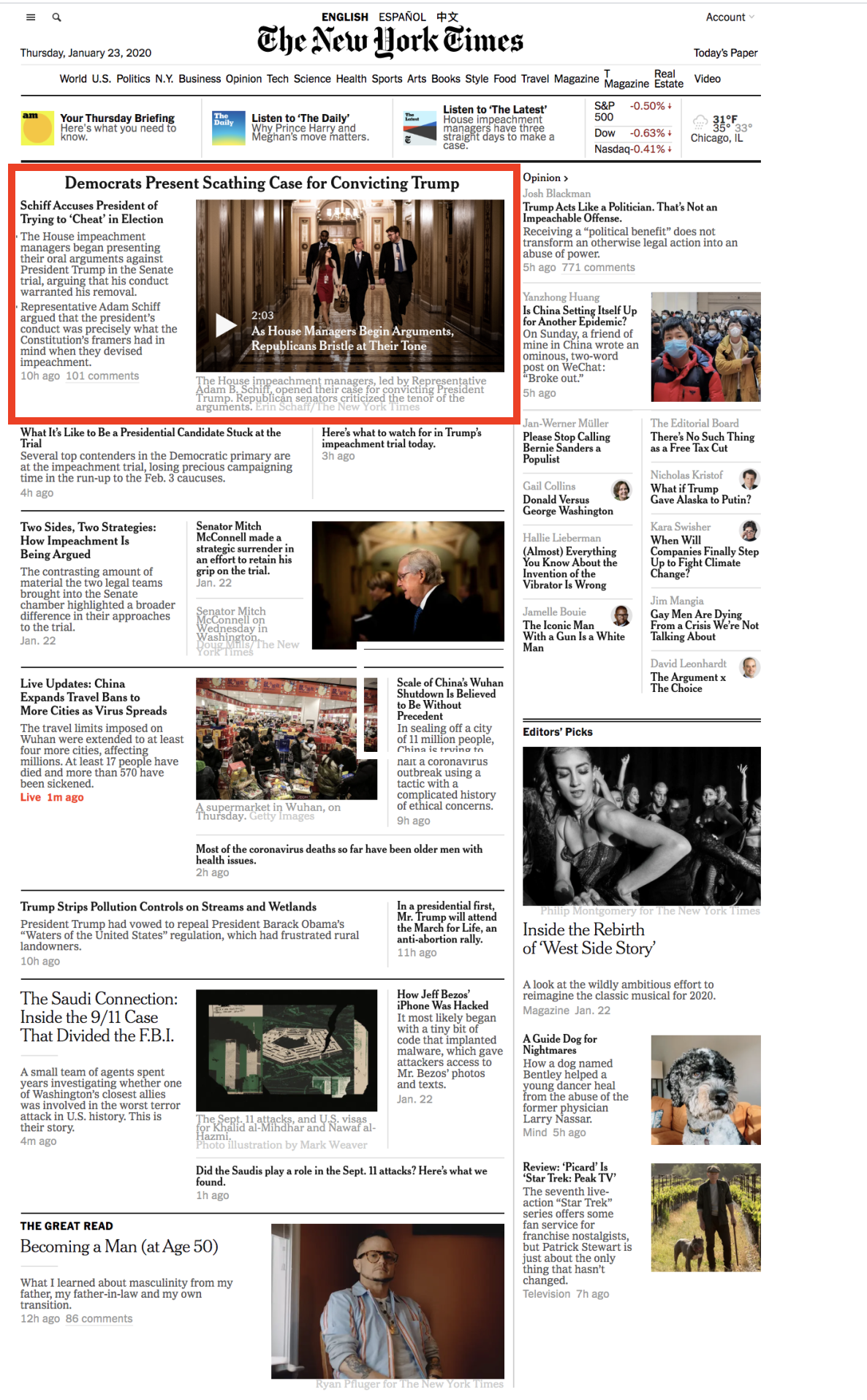 (Representative Adam Schiff from California was the lead prosecutor for the House of Representatives, and yesterday began presenting the House’s case for prosecution in the Senate. Seven representatives assist him.)

Granted, the headline on the linked article is less judgmental (“In impeachment case, Schiff accuses Trump of trying ‘to cheat’ in election), but the characterization of “scathing case for convicting Trump” is an opinion, not an objective fact (I suspect Republicans would disagree). And, indeed, to rational people the case may have been “scathing,” but it’s still an opinion.  Instead of “scathing”, they should have used “thorough” or “well researched”, which are also subjective, but not as strong. The adjective, of course, comes from the paper’s hatred of Trump, instantiated in the paper’s ridiculously high numbers of article about the man (and I use that noun loosely) over the past few years.

“Scathing” is also repeated in the first paragraph of the article, along with “meticulous.” I would have chosen “meticulous” alone for both the text and the headline, as it’s a pretty objective adjective.

WASHINGTON — The House Democratic impeachment managers began formal arguments in the Senate trial on Wednesday, presenting a meticulous and scathing case for convicting President Trump and removing him from office on charges of abuse of power and obstruction of Congress.

Now you tell me: is that journalism or is that opinion? I speak as one who would, based on what I know of the data, also vote for convicting Trump, but newspapers aren’t supposed to report opinion as fact.

I’m sure some of you will, based on your own opinions, say that “scathing” is okay, but I maintain that it’s straight-up opinion, and shouldn’t be in a banner headline.