Maureen Dowd, with her wickedly waspish words, has a column in today’s New York Times about what she calls “Megxit”: Prince Harry and Meghan Markle’s plan to spend at least half their time in the New World, disassociate themselves to some extent from the Royal Family, and try to achieve “financial independence.” Dowd’s column also has a cute title:

It’s a pretty even-handed piece, with praise and blame for both the Queen and her grandson + spouse, and, as usual, is full of Dowd’s efforts to be witty (these can be wearing). But one passage in her piece stopped me cold:

The Firm was out of its depth then, and it is again now. How can the queen and Prince Philip and Prince Charles possibly understand the desire of Meghan and Harry to rebrand as a Goopish lifestyle enterprise? The news that they have applied to trademark hundreds of items, from socks to hoodies, under the “Sussex Royal” logo makes Wallis Simpson’s exile in the Bahamas, spent matching the color on the walls to her face powder, seem positively monastic.

Can you really call yourself “financially independent” when all you’re doing is cashing in on the royal name?

I didn’t believe that they really tried to trademark hundreds of items, but they did! It’s reported on Page Six (click on screenshot): 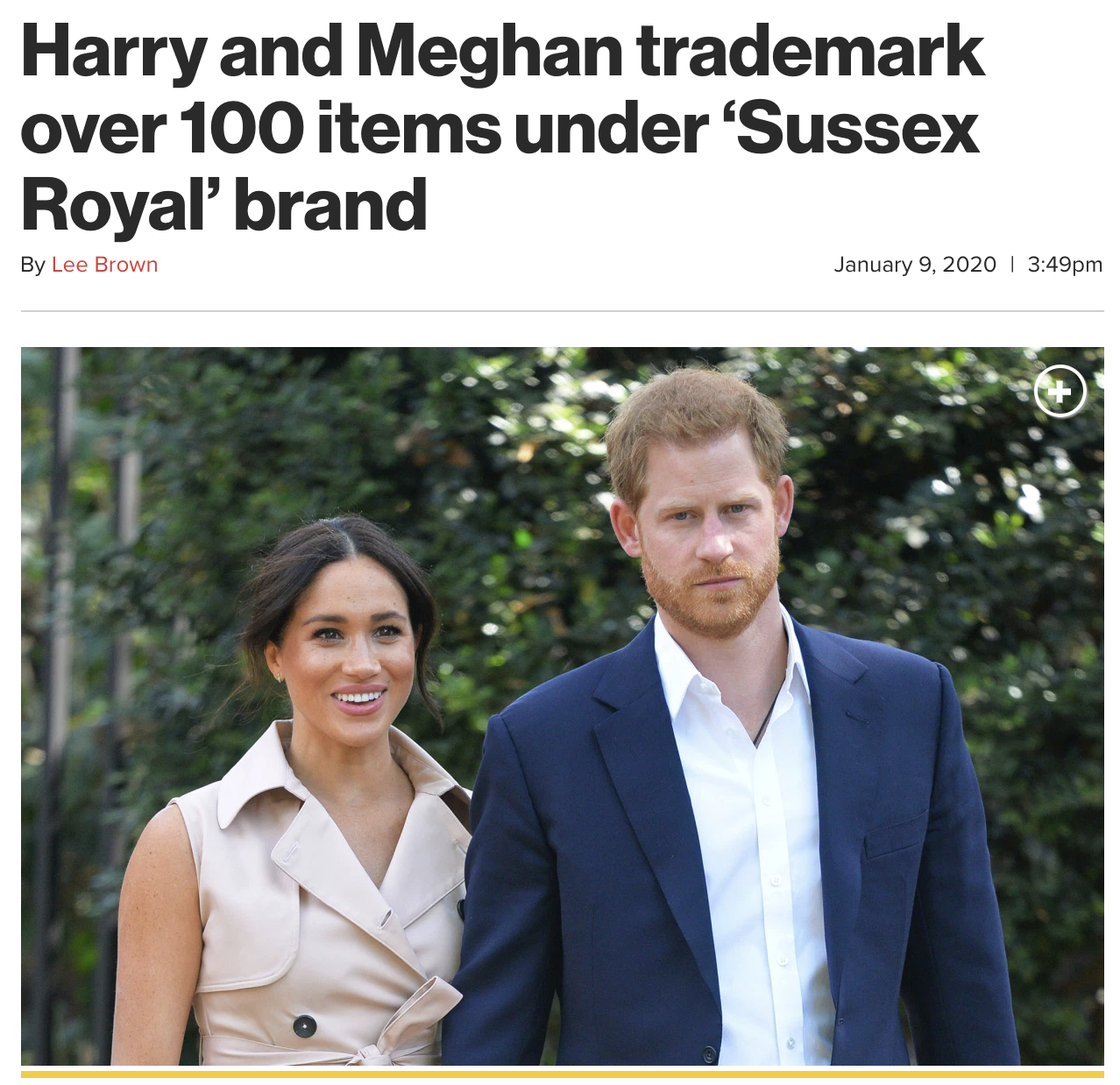 Prince Harry and Meghan Markle may have come up with a way to make “Megxit” pay — by trademarking their “Sussex Royal” brand for more than 100 items last summer, official records show.

The Duke and Duchess of Sussex insisted in Wednesday’s shocking announcement that they would “become financially independent” once free of their royal responsibilities.

Records with the UK’s Intellectual Property Office show that last June the couple made moves to prep a possible financial empire.

Under both “Sussex Royal” and their charitable organization, “The Foundation of the Duke and Duchess of Sussex,” the couple secured trademarks with a wide cross-section of possible products.

Included are clothing, stationery, photographs, educational and charitable endeavors — and even possibly their own newspaper or magazine.

“Undoubtedly, this will be a multimillion-pound revenue business,” retail expert Andy Barr told the Daily Mail, predicting it could generate revenues of more than $500 million.

“This will just be the steppingstone for higher-value products being launched later down the line.

Well, to be fair, what other way could they achieve financial independence? Markle used to act, but does Harry have any job skills besides flying helicopters. And I’m sure a lot of the dosh they rake in will go to charity. Still, making a lot of money by branding things with “Sussex Royal” seems pretty déclassé to me.  They could get regular jobs; after all, when Aristotle Onassis died, Jackie Kennedy, his widow, went to work as book editor. (She was independently wealthy, of course.)

I applauded Megxit, as I’m not a fan of the royals and I can see how anybody who wanted a normal life would chafe under the despotism of the Queen and the stringent, life-constricting duties of a royal. But if they’re trying to become independent, it seems a bit hypocritical to do so by patenting a bunch of goods with the name “Sussex Royal.”

And that’s the royal drama for today.

Oh, and reading the Internet, I see that some Brits view the situation this way: 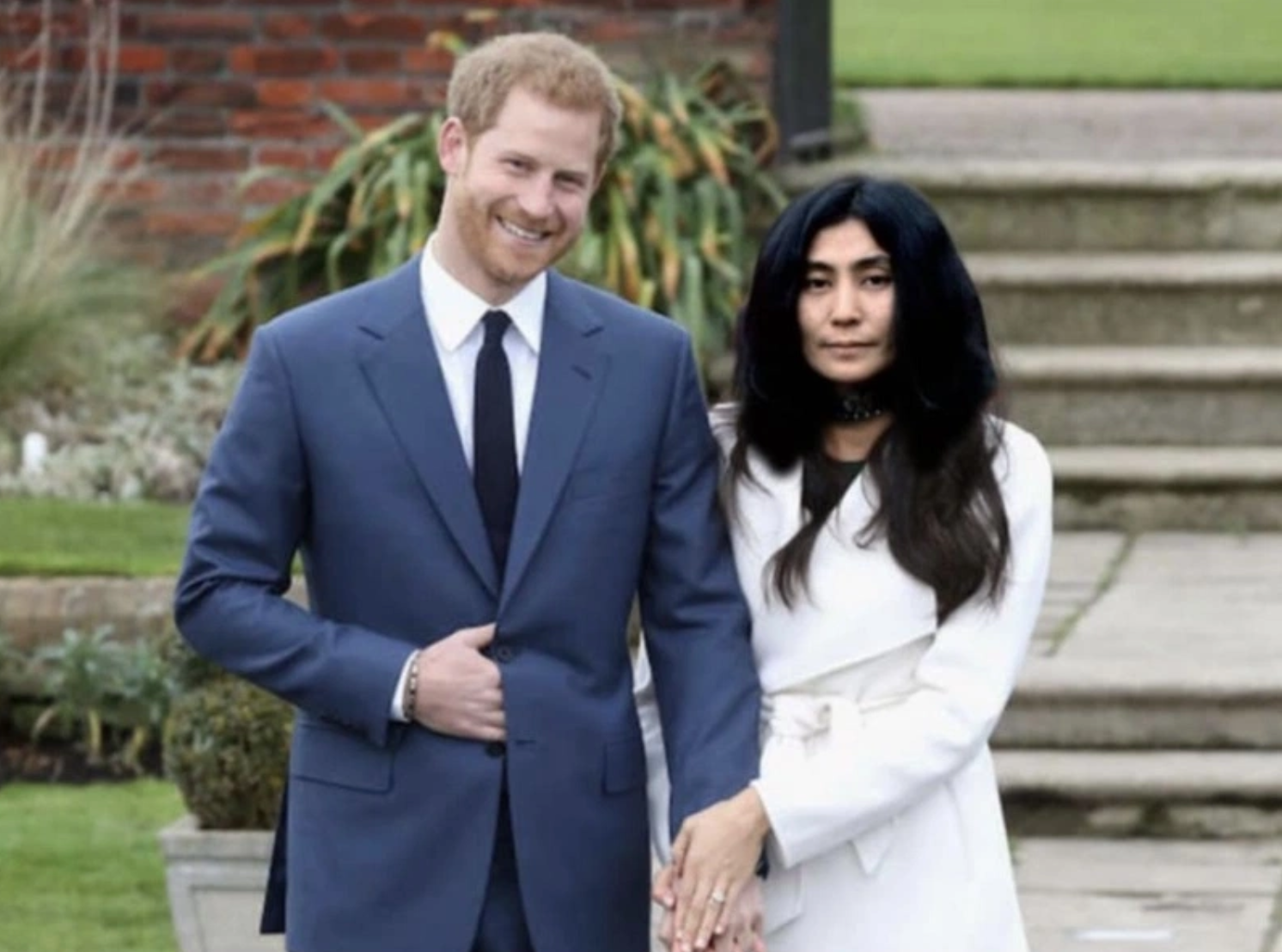