Today we have a series of hyenas from Ralph Burgess, whose notes are indented. The photos were taken in Kruger National Park in South Africa.

In September you posted some of my pictures of spotted hyena (Crocuta crocuta) cubs that are being raised in a culvert that several females in a hyena clan have used for many years.   The mother leaves them safe in a narrow culvert under a road when she goes off to hunt.  The youngest pair were only a few weeks old in September.  They are inquisitive and seemingly fearless (at least of humans), but when I went back in November they had both survived and were clearly thriving. 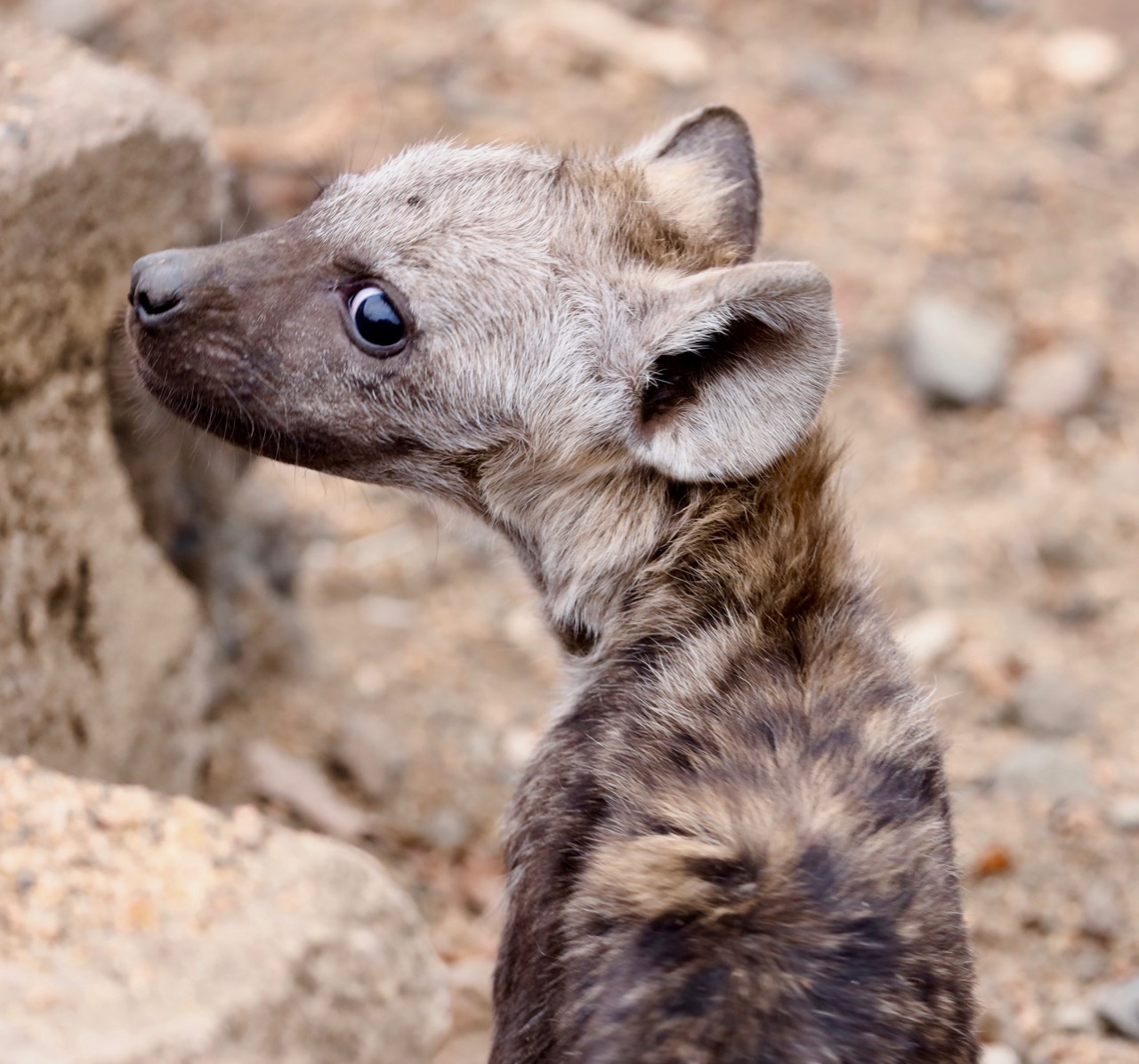 Their black coats at birth have started to give way to a paler coat with spots, and their heads are much paler than their bodies.  Here’s one play-fighting with an older sibling, the picture is a little confusing until you work out that the light colored head is attached to the dark colored body. 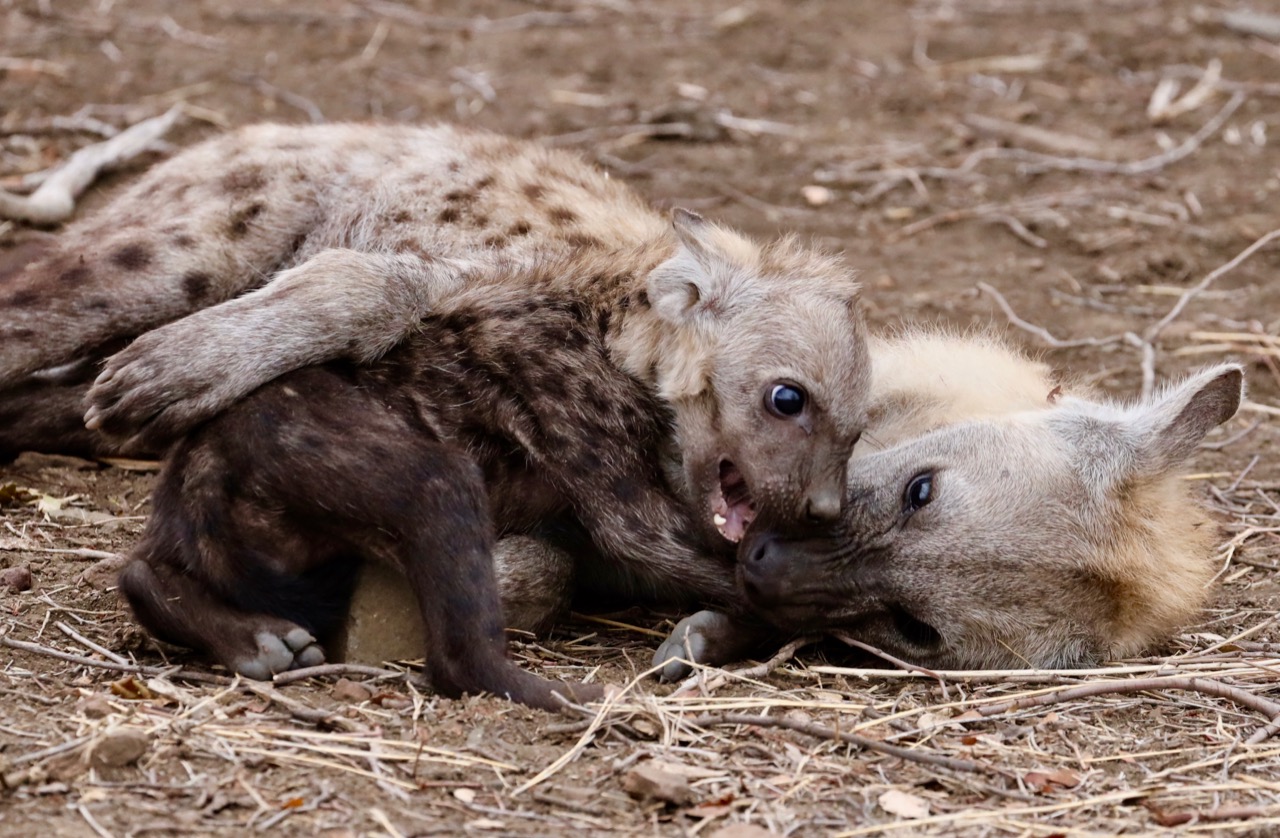 At about 3 months they are still solely dependent on milk. They don’t wean until a year old. 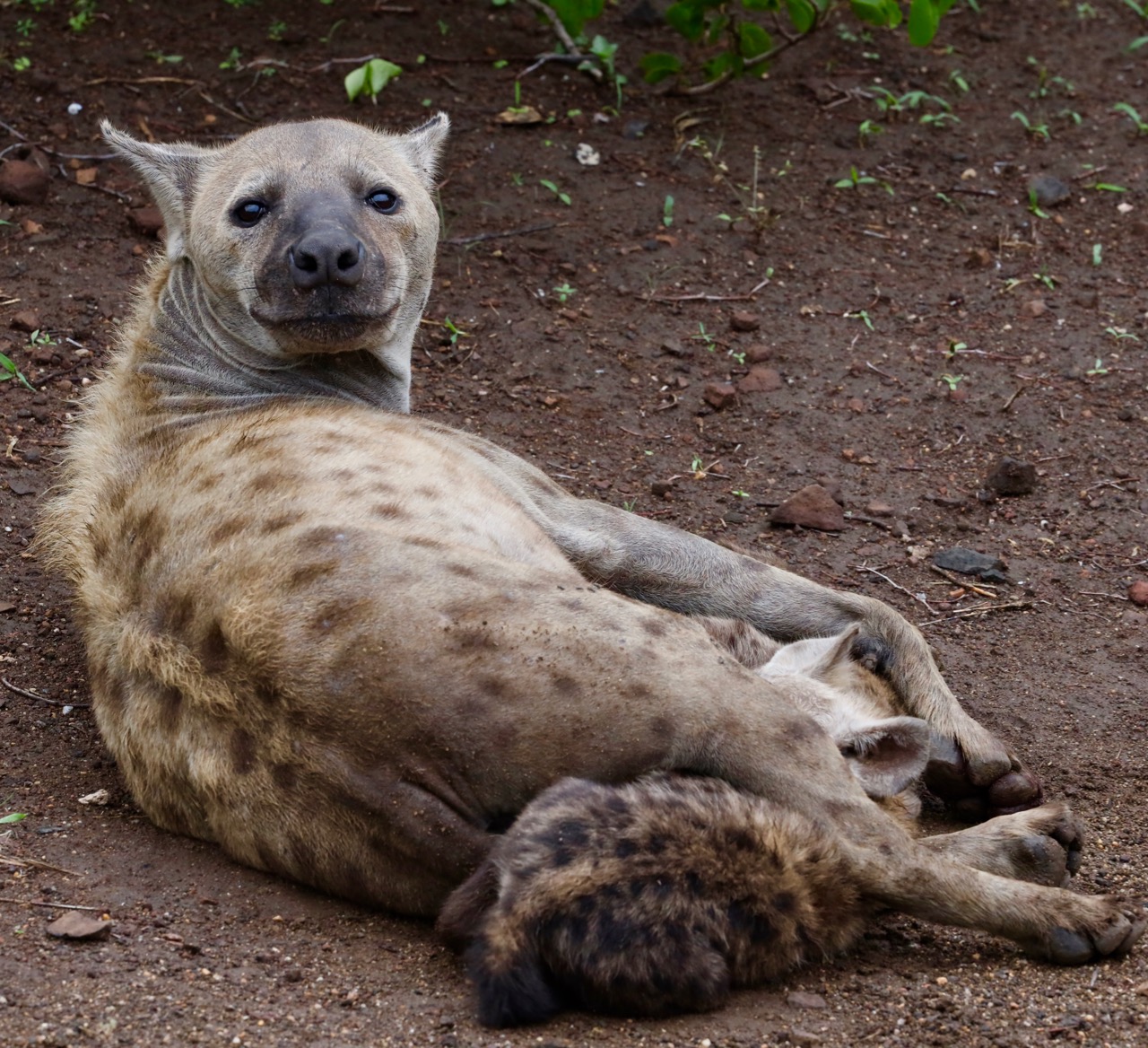 Hyena social structure is based on competition and dominance.  It’s fascinating to watch a group when they are active – you see constant squabbling, fearsome mock attacks, ear-biting etc., but at the same time it’s clearly a strongly cohesive clan. 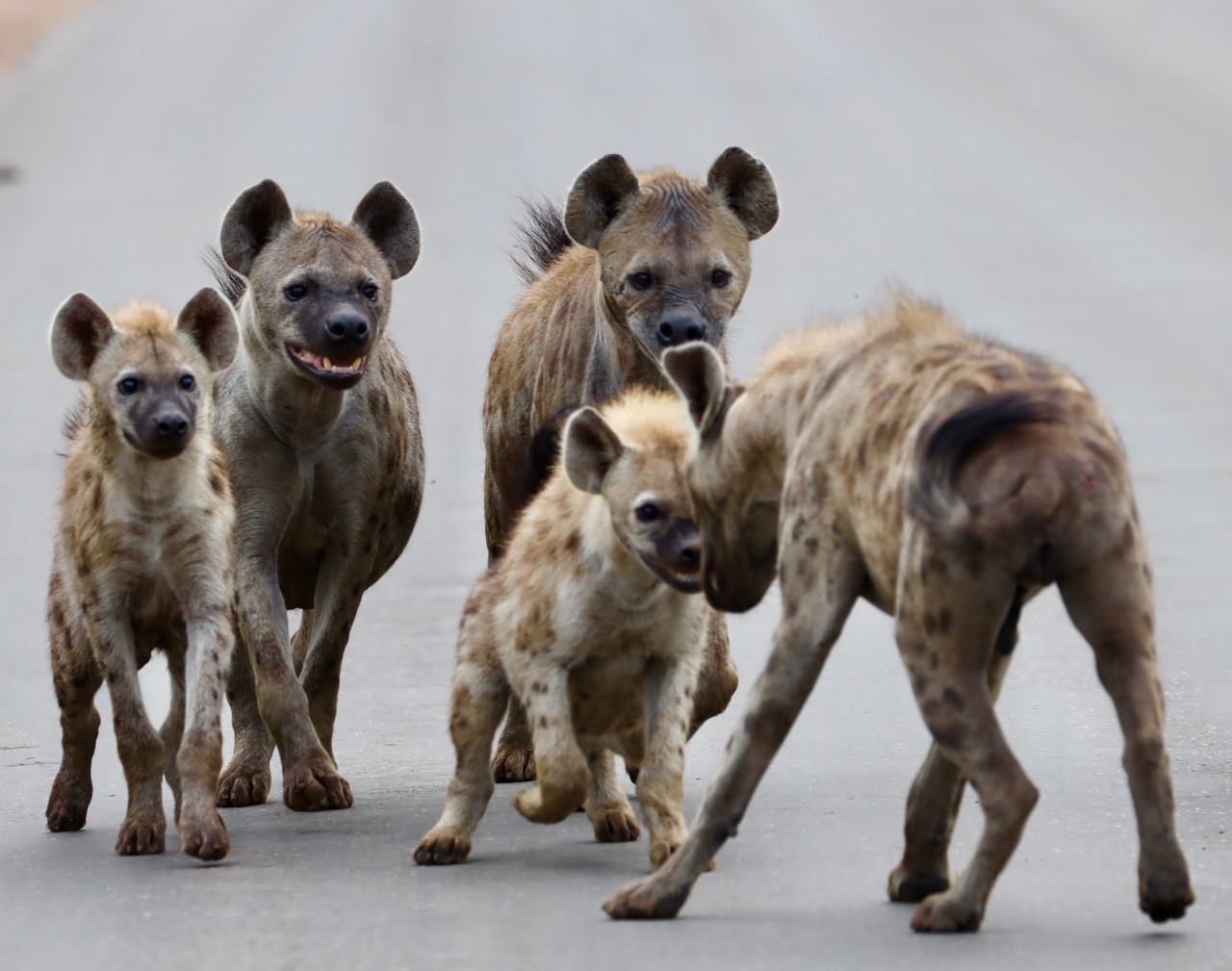 This sequence shows the “negotiations” involved in getting to a point where momma can get some love from an older pair of cubs: 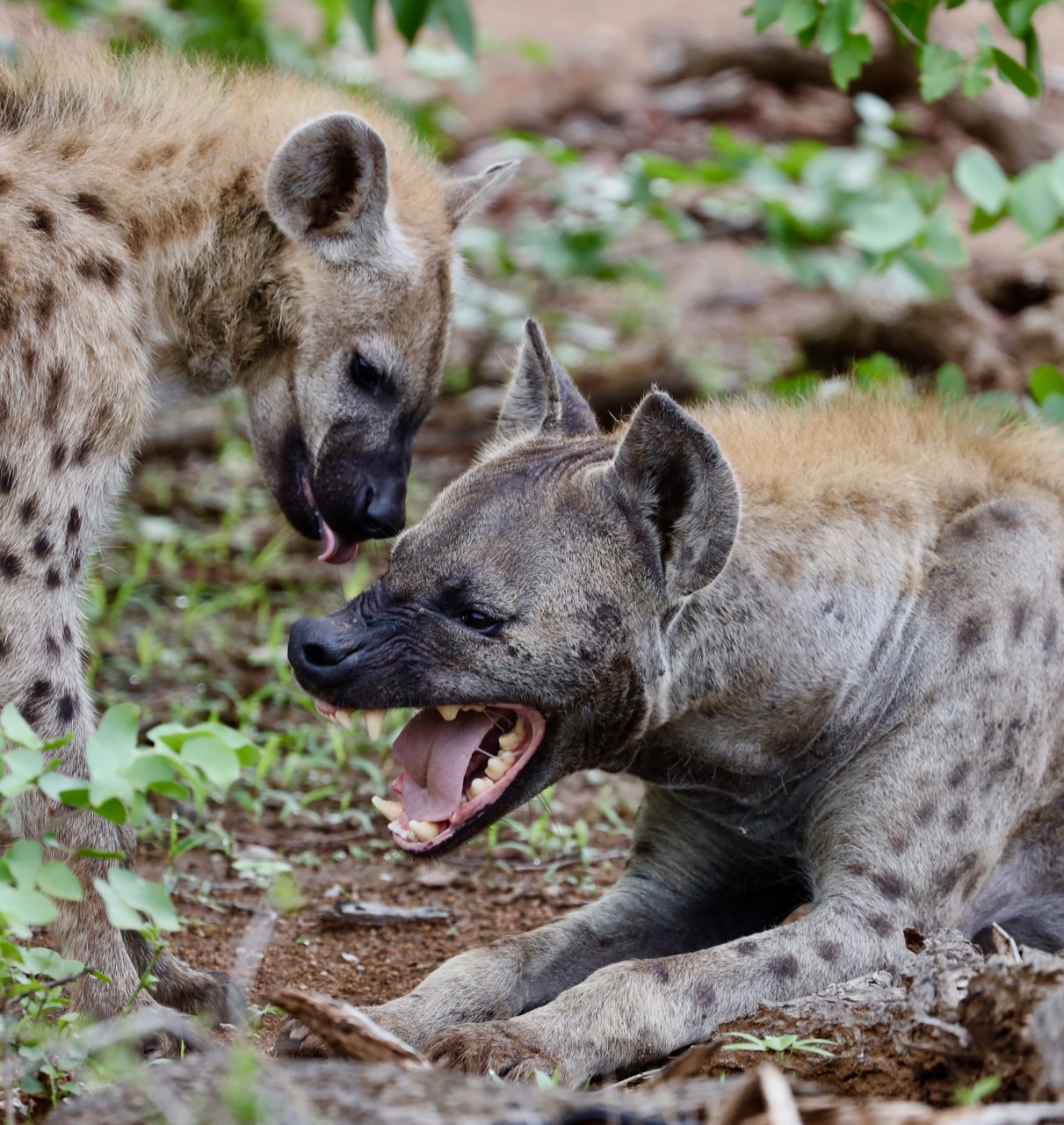 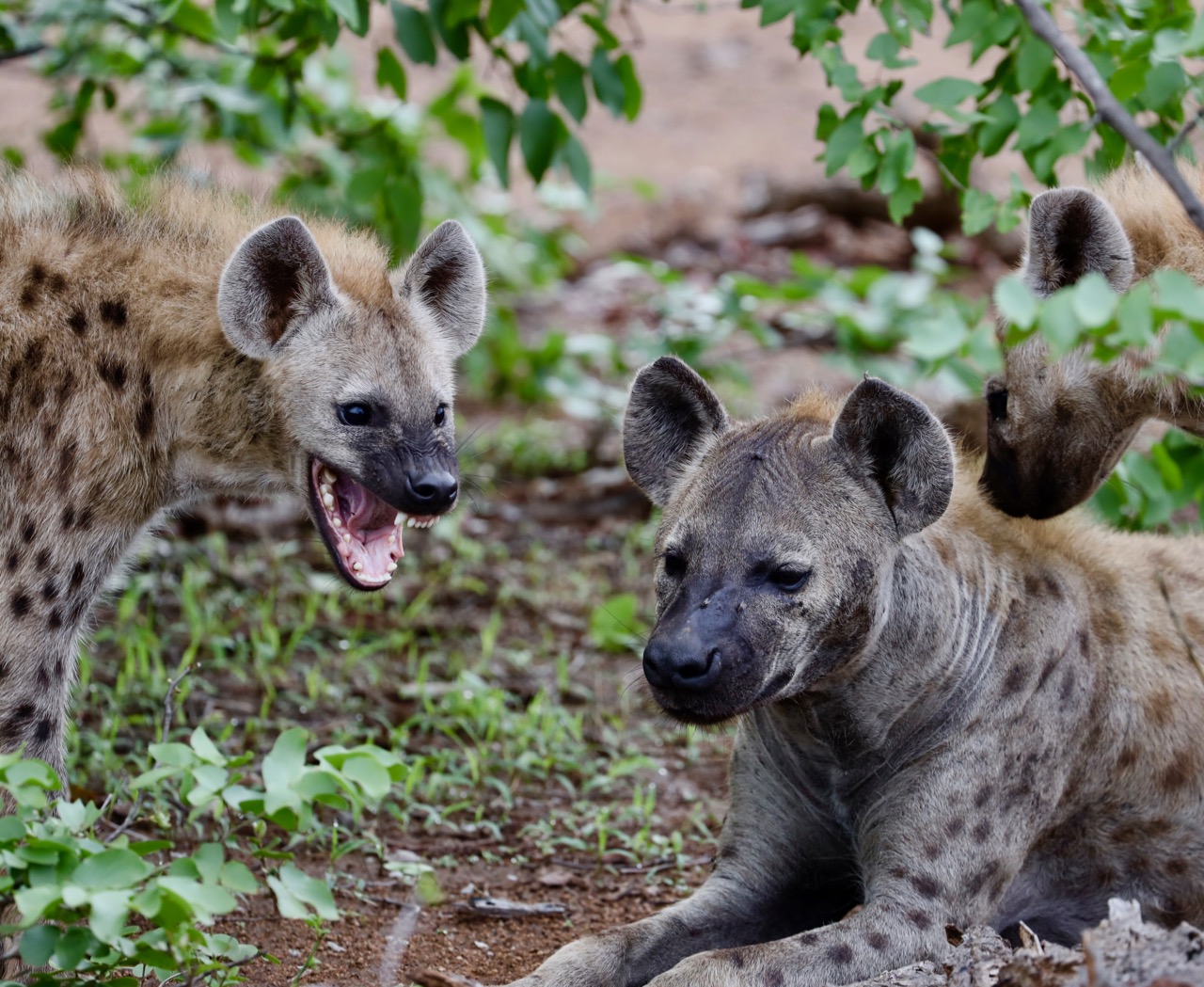 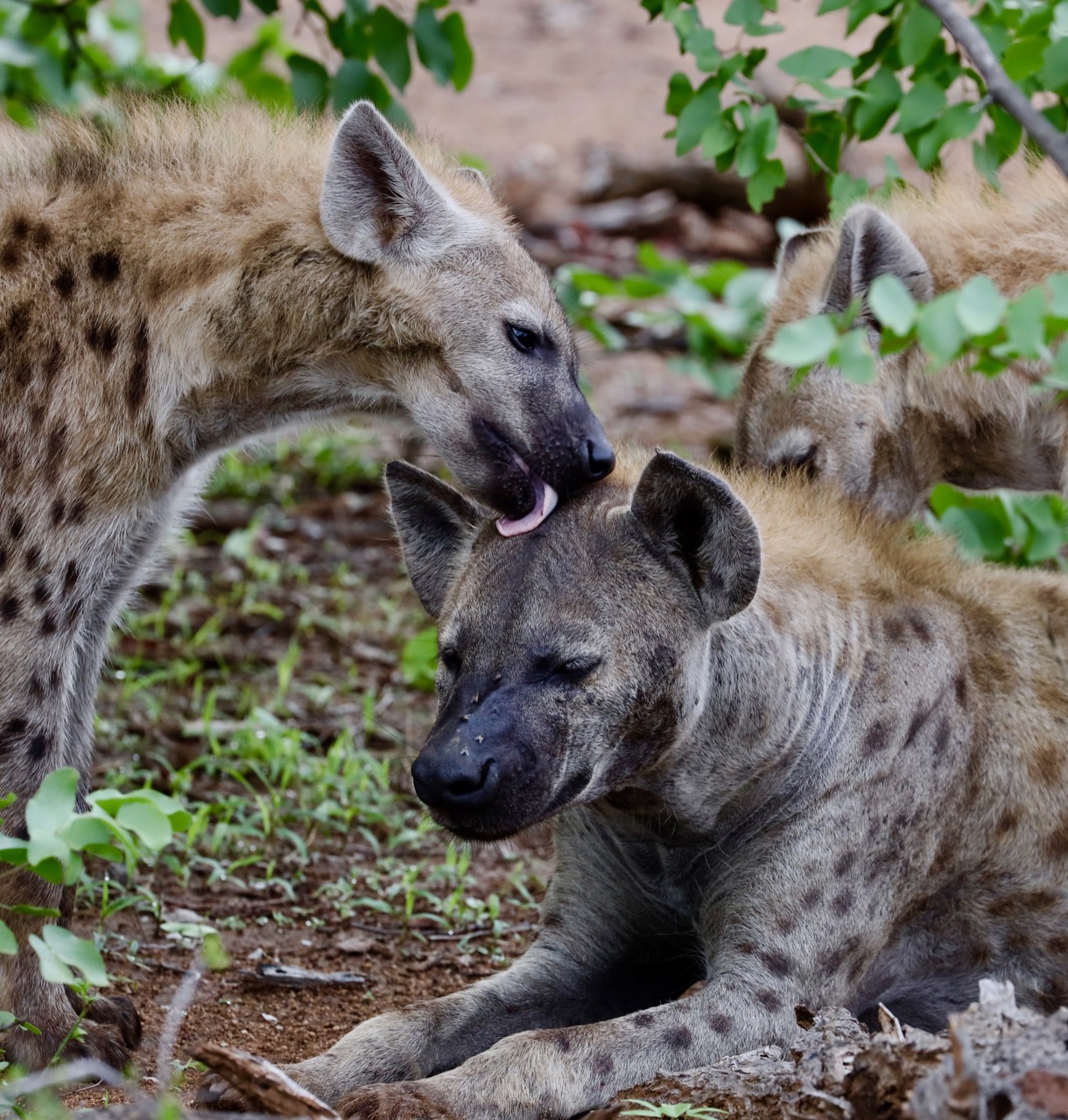 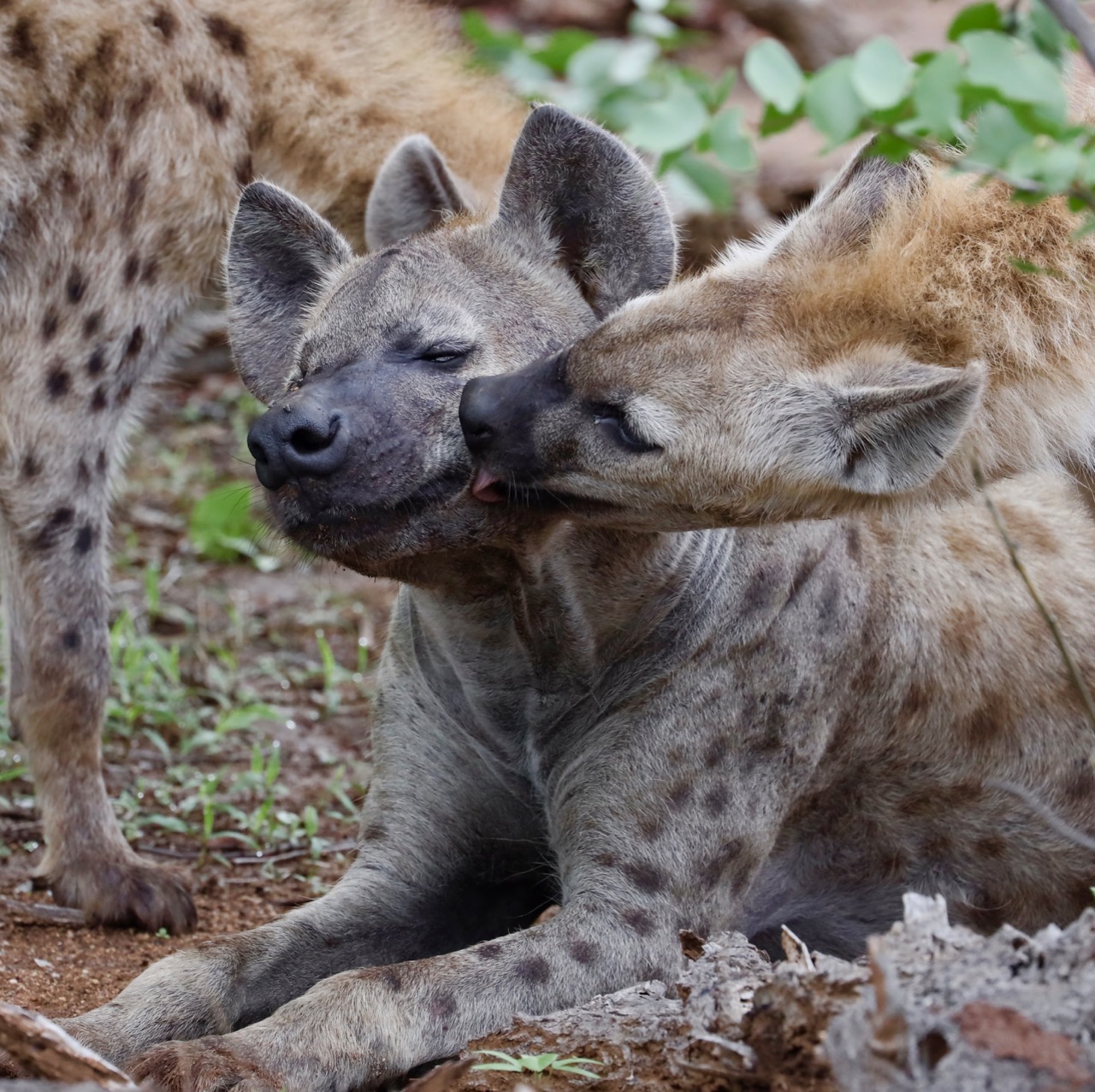 Remarkably, I discovered that black-backed jackals (Canis mesomelas) are now raising a litter in the adjacent culvert, no more than 100 feet away.  I can’t fathom why the jackals see this as a safe place, as even a juvenile hyena would make mincemeat of an adult jackal, and predators often instinctively kill one another’s young.  It’s an appealing notion that maybe there’s some kind of truce motivated by mutual benefit in vigilance to warn the young to hide if other predators are nearby, but who knows.  I saw little of the jackals: they seemed much more reluctant to come out, and I only glimpsed a pair of adults nearby once. 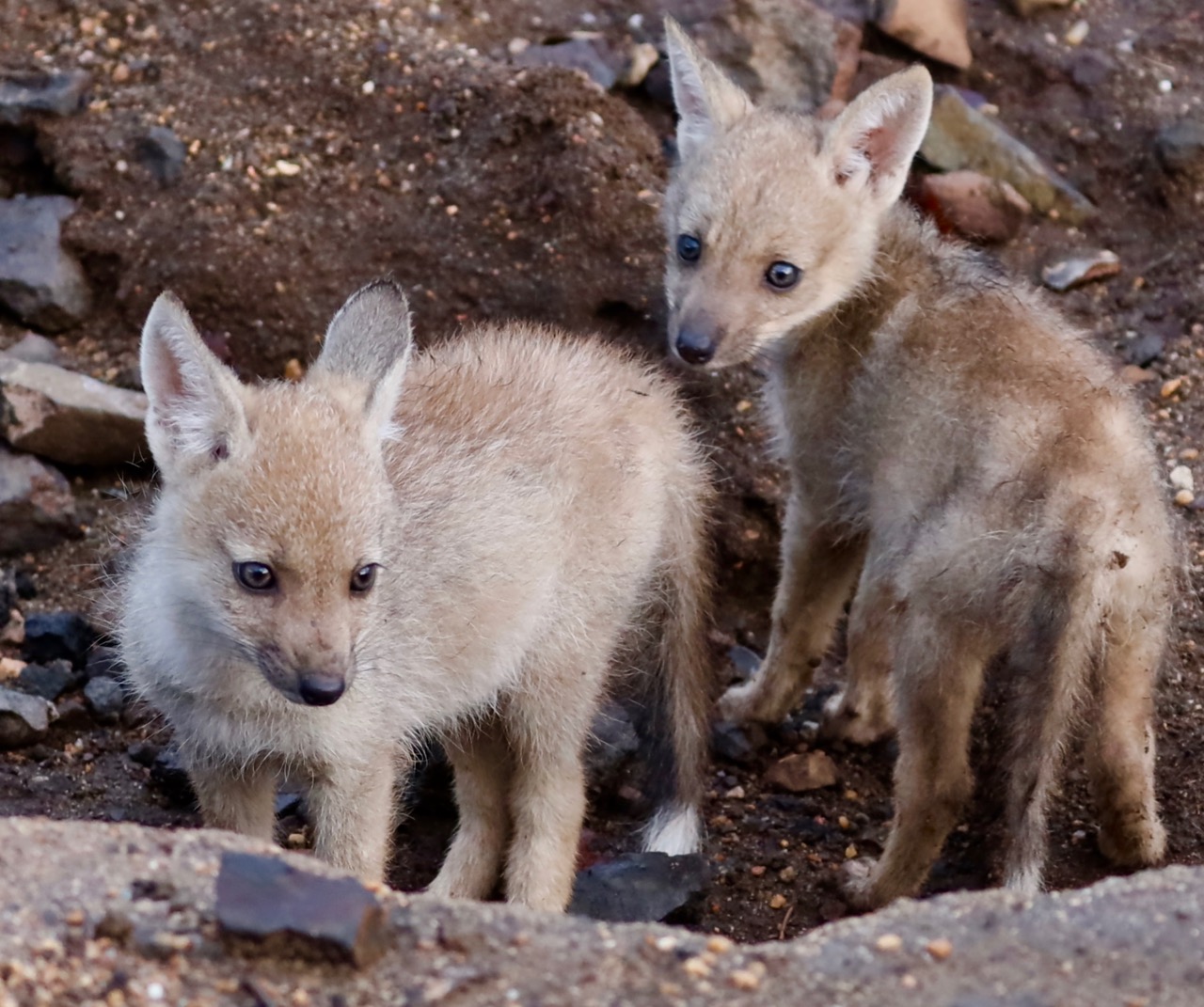 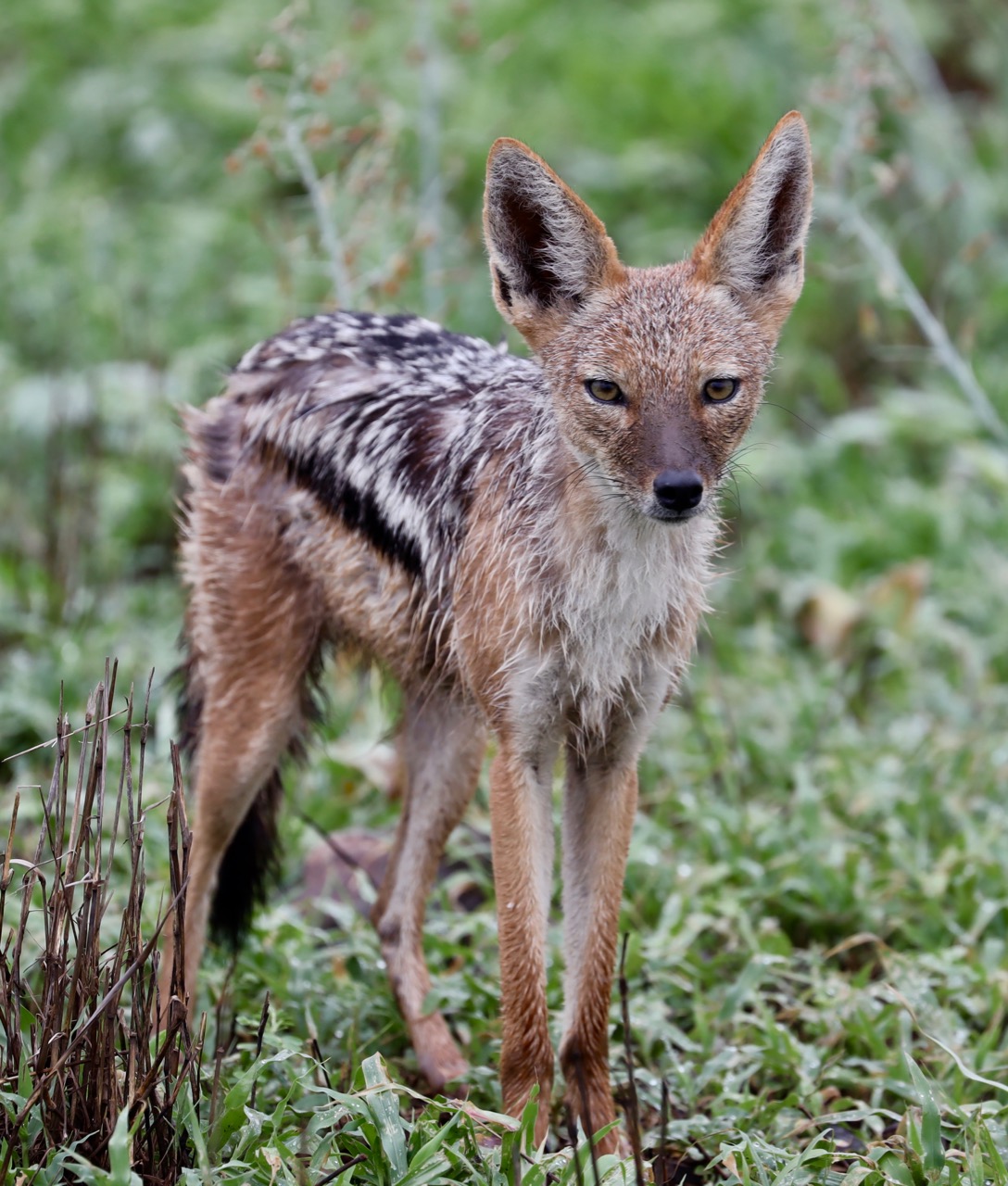 And they share with hyenas an unwarranted negative reputation.  They are certainly opportunistic and wily, but also bold and intrepid given their small size.  Here’s one (successfully at about the fifth attempt) stealing meat from a zebra kill while several lion are still eating! 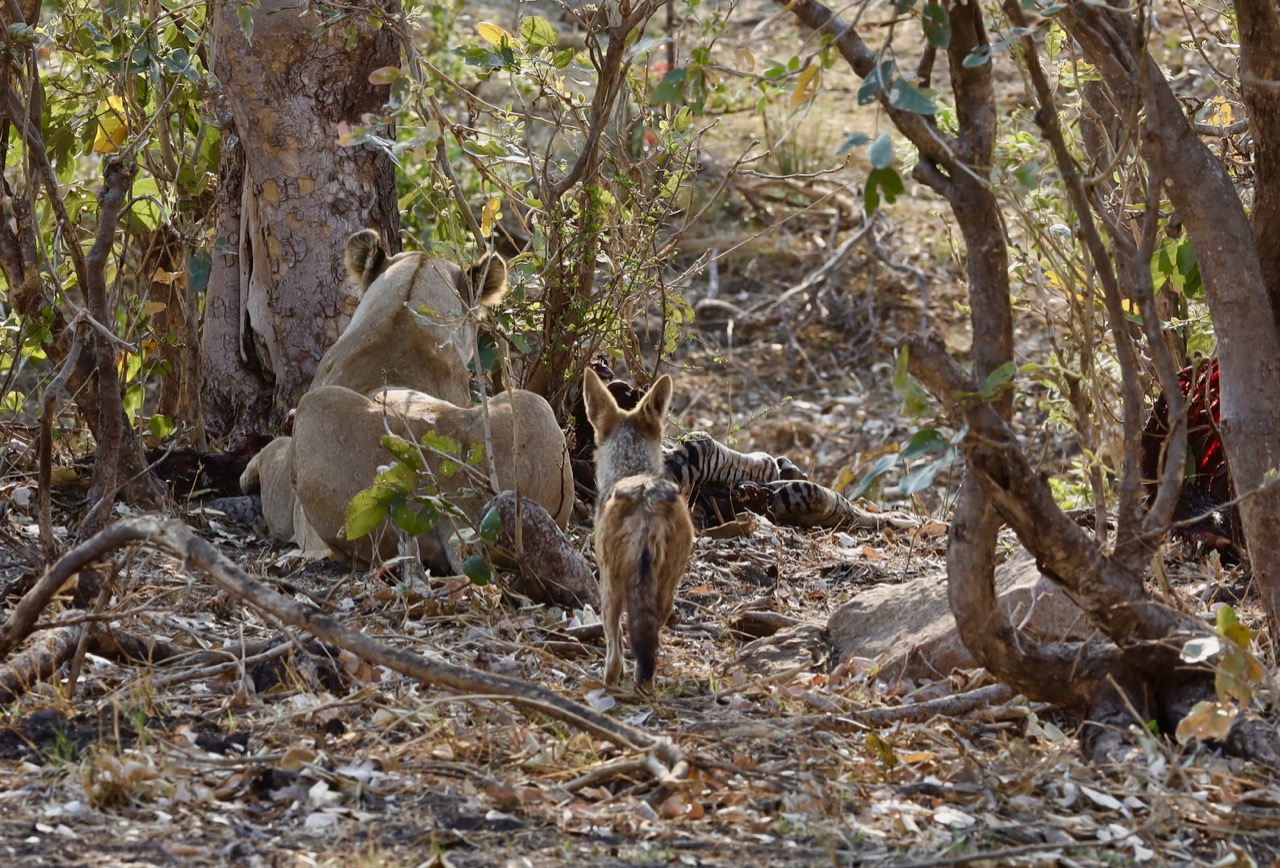