We’ve all observed National Geographic magazine going down the tubes and going soft on religion (e.g., investigating and affirming the historicity of scripture), and on woo. Apparently this issue, highlighted by fellow skeptic Phil Ferguson on his Facebook page, is about trying to validate woo, or at least about implying that there might be something to it. (Until recently National Geographic was owned by Fox, but as of this year it’s a Walt Disney property.) 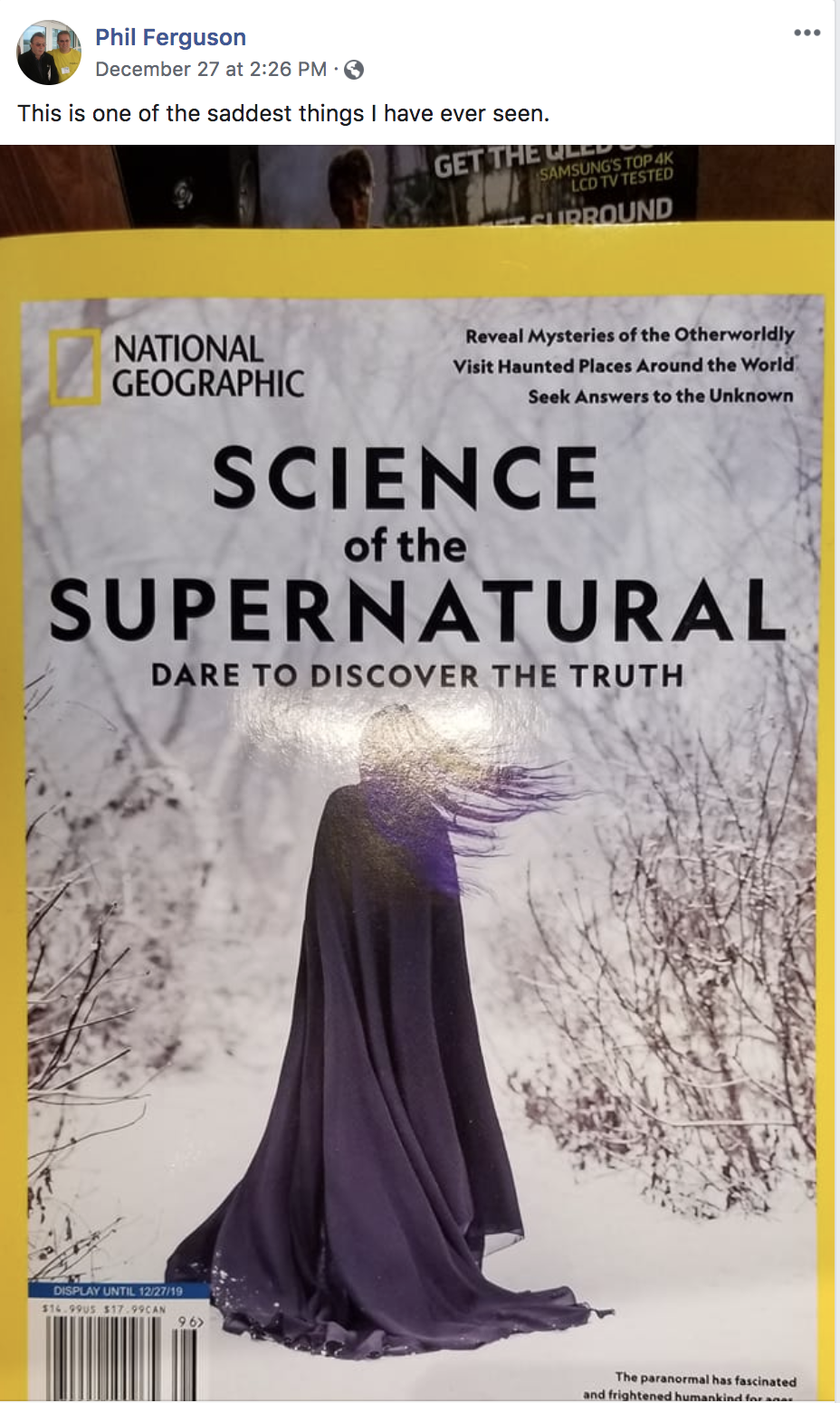 Yes, it is sad, and I wasn’t pleased by the prospect of trying to find out what was between the covers (it’s not easy to find that!). I did notice the subtitle, which hearkens to the woo-ey X-Files. But I was saved from having to read this tripe by Hayley Stevens, who wrote an analysis and critique of the issue’s contents on her website, Hayley is a Ghost (click on screenshot below). Stevens researches claims of the paranormal, trying to find out what’s behind them (she says she isn’t committed to debunking these claims, but to understanding them).

You’re not going to be happy about National Geographic after you read what she wrote: 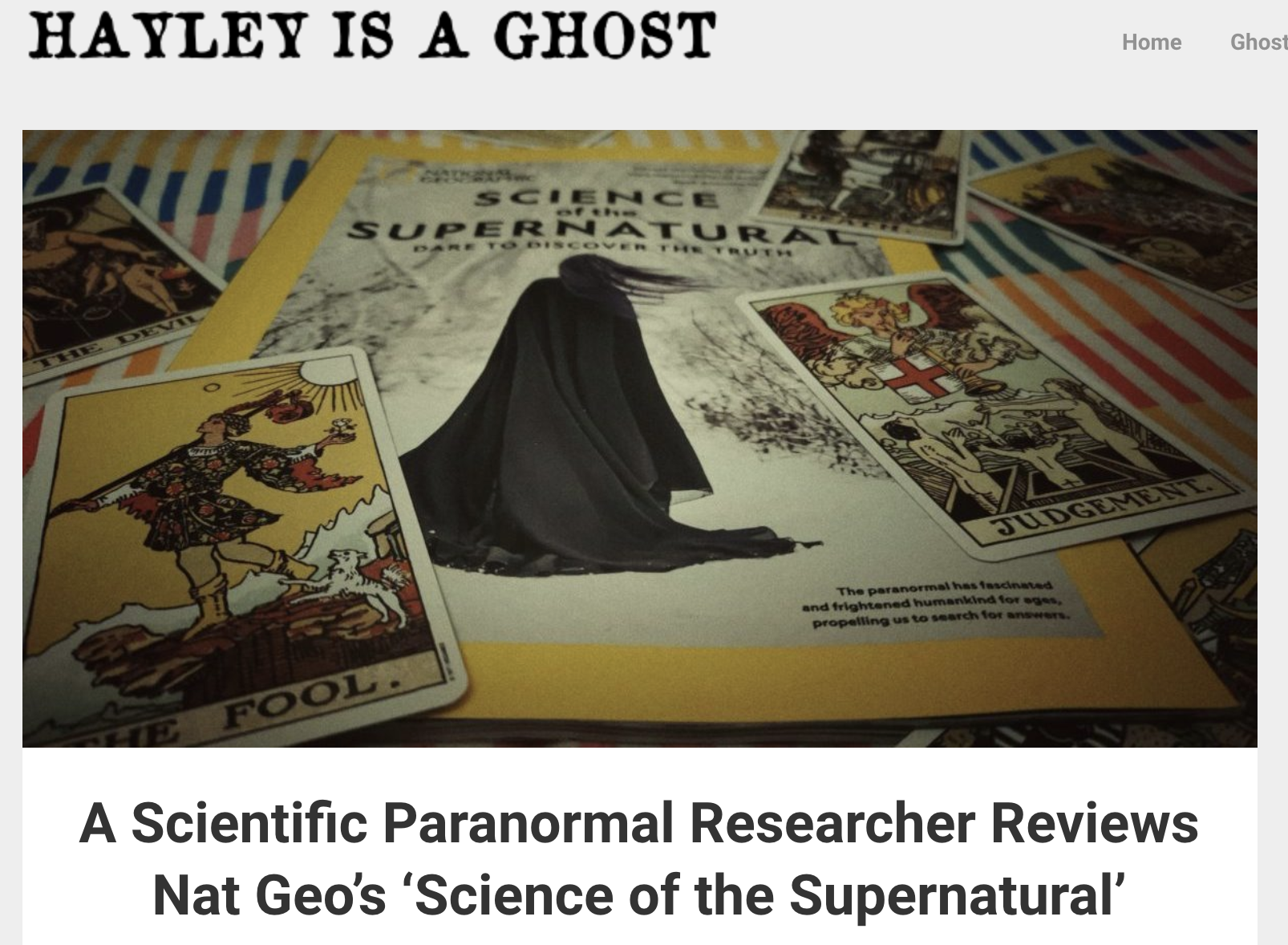 What the magazine discusses includes the following:

And the list goes on. Stevens’s beef is that the magazine blew a big chance to actually describe how scientific investigations have debunked many of these phenomena (she has a list of references at the end of her piece). Apparently, the magazine is trying to leave the door open that. . . there may really be something out there.

I’ll lay it out simply. The ‘Science of the Supernatural’ issue of NatGeo magazine contains roughly half a page of science in the whole 96 pages of the publication. I say science but what I actually mean is ‘accurate science’ because some of the science claims within are wrong, which I’ll come onto in a bit. The magazine has a lot of nice pictures, but it reads like a folklore history blog written by somebody who has a lot of pages to fill and not a lot of time or desire to do so. Nothing written in this magazine is new, nothing in this magazine contributes to helping people learn more about the reality of the supernatural, and certainly not the science behind the supernatural. This is a shame because learning about the science behind paranormal experiences and claims is really, really interesting. It tells us so much about who we are as people, about how society is shaped and reshaped, and about the world around us, too.

The magazine gets a lot of stuff wrong (they mis-describe the Church of Satan, for instance, as a religious organization), and they blow chances to explain stuff properly (we now know that ouija boards “work” via involuntary muscular movements of the participants).  And this statement really got me:

Towards the end of the magazine it is written of earth formations that ‘from crop circles to other land patterns. There are no records of who might have created many of these designs.’

To which Stevens adds:

Stick a fork in me, reader, for I am done.

We now know of many cases of modern crop circles, for example, that were hoaxes or pranks or even advertising gimmicks. To imply that we don’t know who created “many” of these designs is grossly misleading.

But National Geographic has lost half of its subscription base in the last few decades, and so they must osculate religion, the numinous, and the supernatural to try to retain what credulous readers they can. As for me, I have no use for the rag.

41 thoughts on “Once more, National Geographic goes for the woo”