First of all, here is one of the most unusual cats I’ve ever seen, on display at Cole and Marmalade (click on screenshot):

Look at it! It has patches of tabby markings on a white body, heterochromia (odd-colored eyes), and a lovely dark patch on its nose: 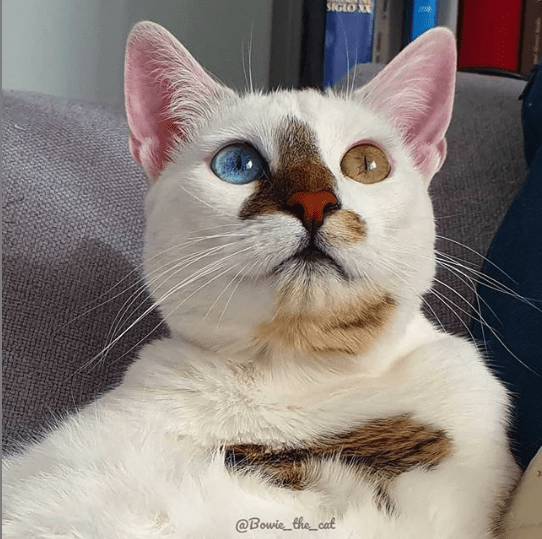 [In] 2018, a lonely kitten without a home was left abandoned. A veterinarian’s office in Spain took him in, and the beautiful white and tabby marked kitten loved to play. Then he met Maria Lloret, his soon to be proud cat mum. Instantly she knew this adorable kitten with spunk had to be named Bowie The Cat given his gorgeous odd-colored eyes. And, as they say, the rest is history! 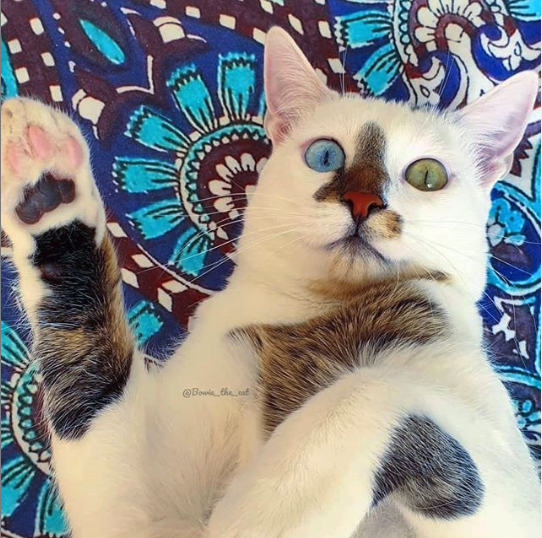 His cat mom started sharing photos of her heterochromia cutie online in late 2018. And it didn’t take long for cat lovers all across the globe to take notice of this Spanish feline head-turner. 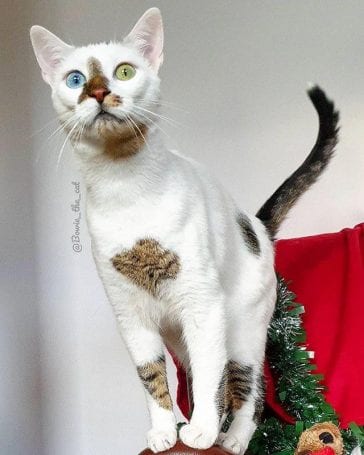 Bowie lives in beautiful Alicante, Spain, and when he’s being a good little feline his mum will take him for some fun and safe adventures. 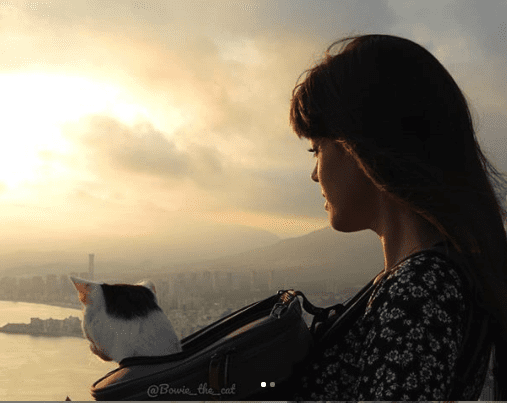 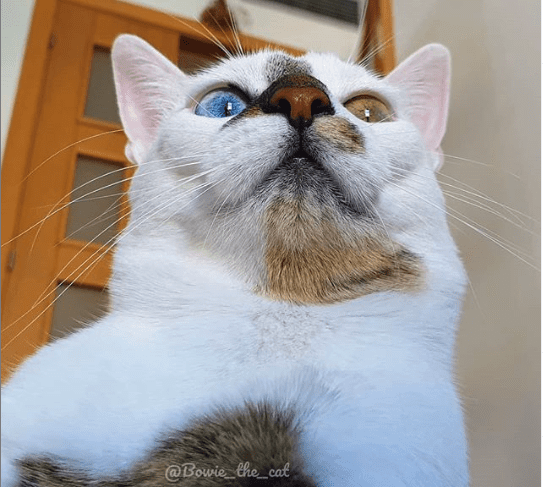 Bowie the Cat also has a Facebook page and a website.  His name, of course, comes from David Bowie, who had anisocoria, a condition in which your pupils are two different sizes. Sites that describe Bowie’s condition, the result of a fistfight he had as a teenager, say that his eyes weren’t really different colors, but only looked that way because of the different sizes of the pupils. You could have fooled me! 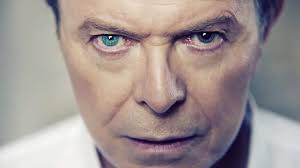 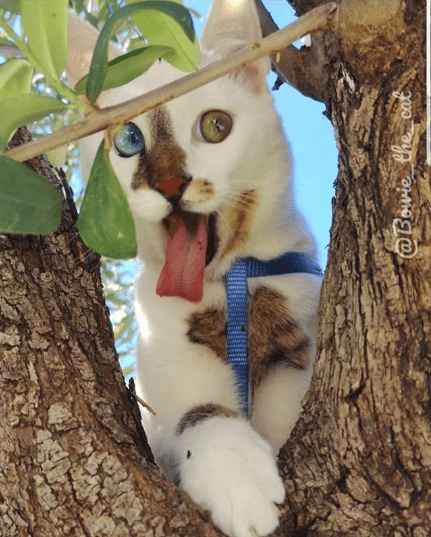 From The Animal Rescue Site we have the story of Fat Fred (click on screenshot):

A post-it and several sheets of paper were tapped to the door of a vet clinic – all to describe the resident cat.

A chunky cat named Fat Fred has captured people’s attention and apparently the clinic has received many inquires about him – so they decided to post a witty note.

Someone was strolling by the clinic when they noticed the note and snapped a photo to share online.

KneeAppallingTanIceCream posted the hilarious sign to Imgur with the caption, “Walking by a vet clinic when I saw this sign…” and it immediately went viral. 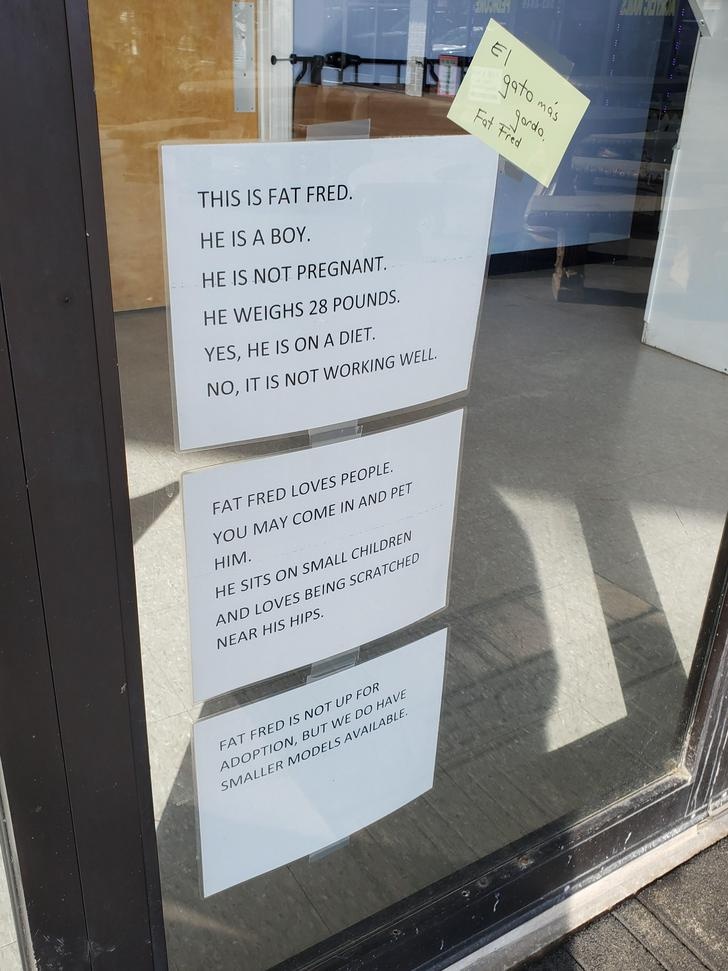 A photo of Fat Fred was posted online along with the photo of the sign. The photo captioned, “Fred in all his glory,” received many comments because the cat appears translucent and looks like a ghost.

One person wrote, “Fat Fred weighs a lot for a ghost.”

Some can relate to Fred’s struggle. “I feel you, Fred. I feel you,” commented a follower. Laughter is the best medicine and this clinic just made the day of thousands of people.

Well, I don’t think a fat cat is very funny, though the sign is amusing. I understand it’s really hard to get overweight cats to slim down, and I wish the best for Fred. Here he is: 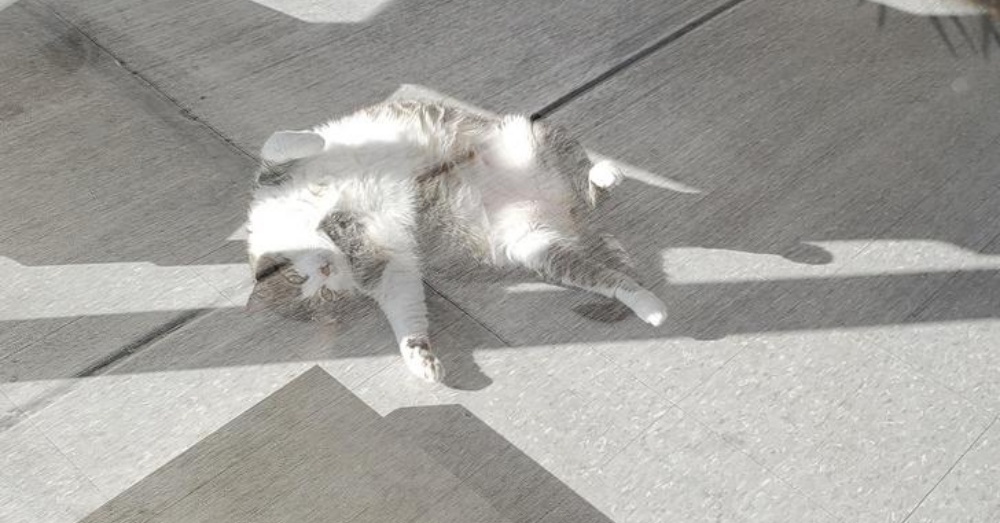 Finally, from the BBC we have the story of Wilbur the Cat (click on screenshot), a domestic moggie who decided to leave home after the staff adopted two kittens, and now makes the rounds of his village, acquiring the name “The King of Ruddington”: 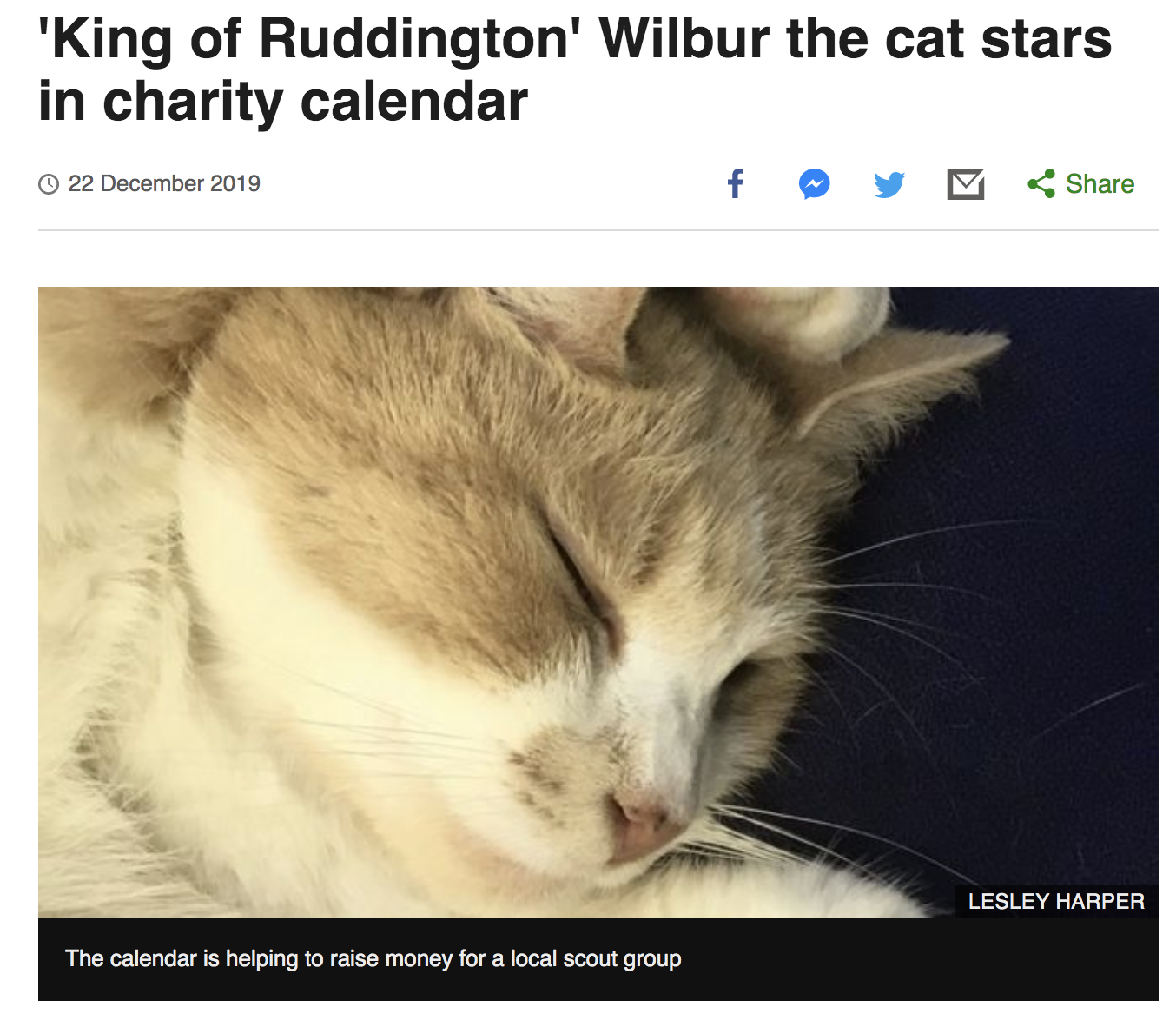 Some of the story:

A cat whose popularity with locals saw him crowned “king” of his village is featuring in his own charity calendar.

Ginger feline Wilbur – widely known as the “King of Ruddington” – is known to saunter around the Nottinghamshire village, calling at shops and pubs.

Earlier this year, residents came together to hold a village-wide party to celebrate his 10th birthday.

The Wilbur calendar is being sold at a building society in the village to raise money for a new scout hut roof.

Wilbur’s original owner said he “packed his bags and left home” about five years ago when she bought a pair of rescue kittens.

He now calls in for meals at several places round the village including the pubs, a florist and the building society. 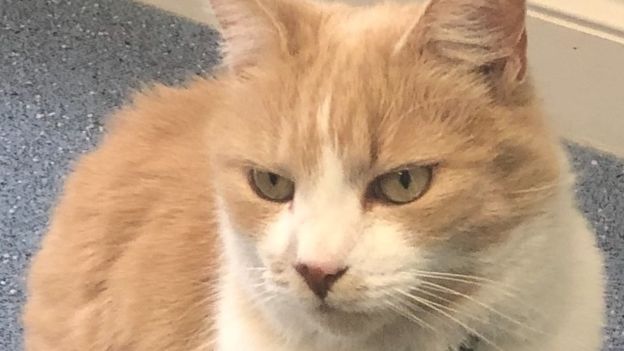 The calendar was organised by staff at the Nottingham Building Society after scouts asked businesses in the area to help with their fundraising push.

They are being sold for a suggested donation of £4.

Assistant branch manager Lesley Harper said: “Wilbur is such a popular character and so well-loved in Ruddington we thought the calendar would be a great idea.

“It’s great that he’s helping to raise money for such a worthwhile cause too.”

Ms Harper said the calendar had proved popular with residents who did not use social media but were keen to see more photos of Wilbur.

The 1st Ruddington Scouts have been fundraising for a new roof for more than a year as their current roof is leaking.

Wilbur has just turned ten, and the locals gave him a birthday party that you can see in a video at the site. Here’s a screenshot: 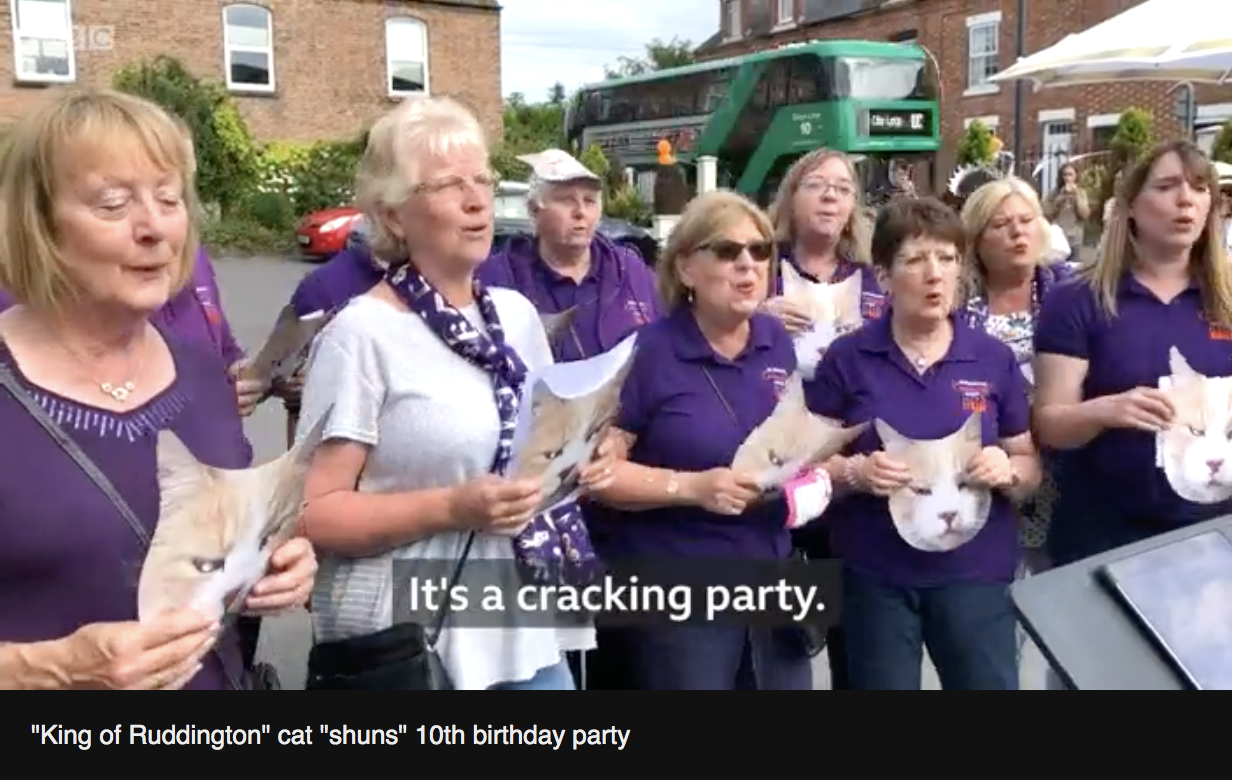 8 thoughts on “Caturday felid trifecta: A beautiful rescue cat; a Cat of Size goes viral; famous British cat gets his own Christmas calendar.”