Well, it finally happened: writer J. K. Rowling, who’s been vocally progressive in her politics since she became famous, has now become demonized for being a “transphobe”. What that means is that she gave support, on Twitter, to another woman who was fired from her job (a charity) because she refused to recognize transsexual females (male —> female) as completely equivalent to biological females. The court case about the firing is summarized by Andrew Sullivan (who has views similar to Rowling) in his latest New York Magazine column, and he links to the judge’s decision declaring that the woman supported by Rowling, Maya Forstater, had every right to be fired. Another account of the case, insisting that Forstater was indeed a hateful transphobe, was given by Vox, which also displays many anti-Rowling tweets as if to buttress its stand. (Vox is quickly becoming like HuffPo.)

Among the views now held to be self-evident by parts of the left is that there is no distinction whatsoever between a woman and a trans woman. In Britain, where there is no First Amendment and the cops can knock on your door and, in extremis, jail you for thoughtcrimes, a recent case shows exactly what this movement is now about. It involves a woman who dissents from this new orthodoxy and believes that biological sex is not the same as socially constructed gender and that, although you can change your gender, you cannot change your sex. Maya Forstater expressed this view on social media and elsewhere — and as a result was fired by a charity called the Centre for Global Development.

It’s vital to note that Forstater is prepared to treat any trans woman as a woman in real life, defends trans people’s rights to define themselves as they wish, has not been charged with any kind of harassment or in-person abuse, is happy to accept anyone’s adoption of any of a thousand possible genders, but simply refuses to say what she doesn’t believe: that sex can be chosen or assigned, rather than simply observed as a matter of biology. “I accept everybody’s gender identity; I just do not believe it overrides their sex,” she told the court. “I refuse to believe human beings can change their sex.” This view — almost universally held for millennia until five minutes ago, and rooted in the plain facts of science — is now, the court ruled, subject to legal sanction. Such a view is “incompatible with human dignity and fundamental rights of others“ and “not worthy of respect in a democratic society.” So anyone expressing an opinion like Forstater’s can be fired with no recourse.

An excerpt from Vox:

In 2018, a think tank called the Centre for Global Development (CGD) contracted with a British woman named Maya Forstater as a consultant. Forstater is a vocal TERF — or a trans-exclusionary radical feminist, a supporter of a transphobic political movement arguing that transgender women are men, and thus should be exempt from the legal and social protections afforded to women who are biologically assigned female at birth. TERF activism has been on the rise for years, particularly in the UK, where transmisogyny has become deeply embedded in feminist movements.

Throughout September 2018, and over the course of several different conversations in several different contexts, Forstater tweeted and retweeted a number of critical and dehumanizing things about both trans people in general and one specific nonbinary person in particular. The tweets made staff members at the CGD uncomfortable, and ultimately, in March 2019, the company declined to renew Forstater’s contract.

Forstater responded by suing the company and its director, claiming that not renewing her contract was workplace discrimination against which she was protected by Britain’s 2010 Equality Act — even though that act also prohibits discrimination on the basis of “gender reassignment.” The case was seen as a major test of the law, with queer and trans activists fearing that a ruling in Forstater’s favor would mean open season on harassment of marginalized communities in the workplace.

Instead, on December 18, the court dismissed Forstater’s claim, in a ruling which outlined her extensive history of transphobic remarks and found that she “is absolutist in her view of sex and … will refer to a person by the sex she considered appropriate even if it violates their dignity and/or creates an intimidating, hostile, degrading, humiliating or offensive environment. The approach is not worthy of respect in a democratic society.”

It’s this committed ideological dedication to repudiating trans identity — the approach that’s been legally deemed unworthy of respect — that J.K. Rowling is championing in her “#IStandWithMaya” tweet. And as this context became clear to Harry Potter fans, a big, and sadly familiar, revolt occurred on social media.

Here’s Rowling’s tweet that got her into serious trouble on social media, though I doubt it will much affect her book sales:

Dress however you please.
Call yourself whatever you like.
Sleep with any consenting adult who’ll have you.
Live your best life in peace and security.
But force women out of their jobs for stating that sex is real? #IStandWithMaya #ThisIsNotADrill

Now if you read the court case, and look at Forstater’s “incriminating” tweets, you’ll see that they do not involve name-calling but rather a serious questioning about whether transwomen are equivalent to biological women. (Have a look; I don’t see them as “transphobic.”)  The only thing I can see as potentially offensive—and which could be considered harassment in the workplace if it was exercised consistently (it wasn’t), is that Forstater doesn’t like to use a trans person’s chosen pronouns if they don’t jibe with their biological sex: 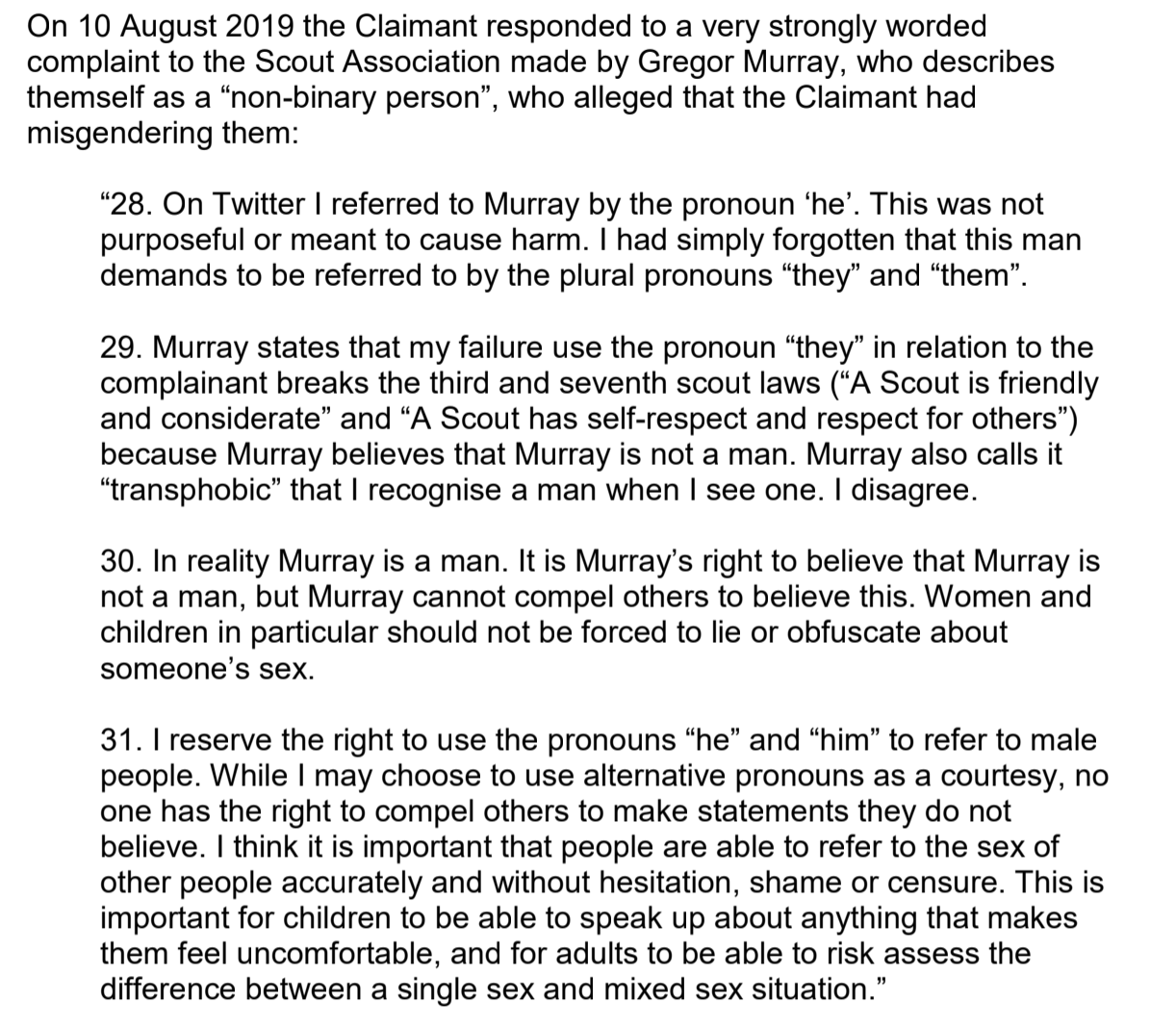 But there is no accusation of personal or workplace harassment in the case; it was decided on the grounds that, well, here’s what the judge said: 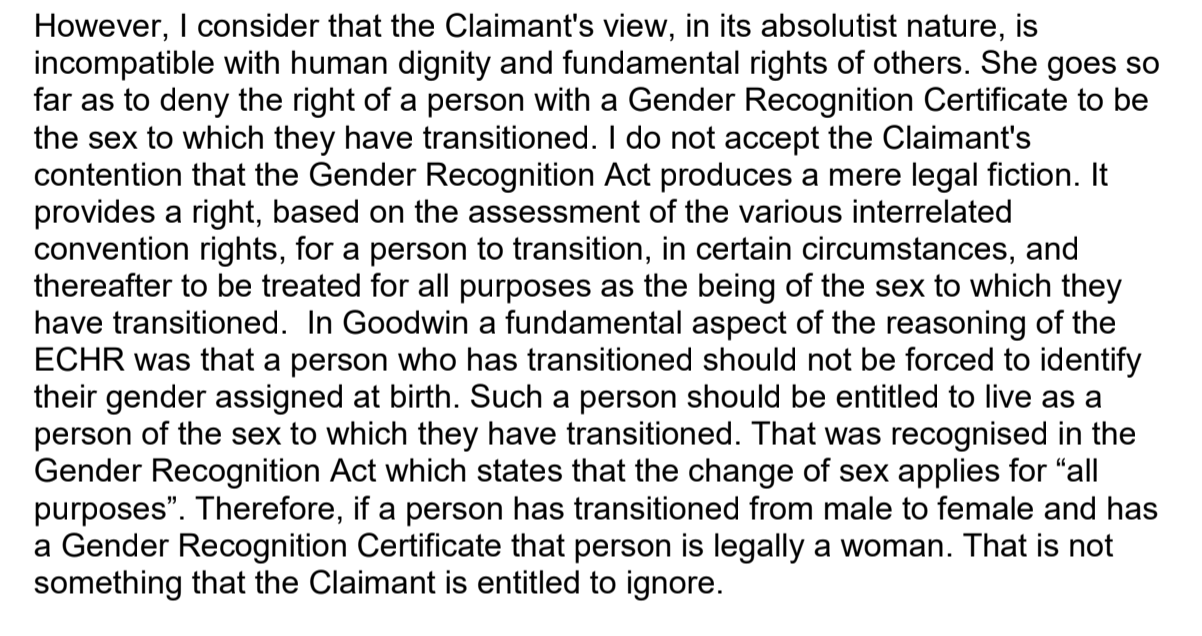 Again, there is no accusation of biased behavior here, or of Forstater deliberately denigrating transsexual persons. What the ruling is based on is a lot of tweets in which Forstater questioned whether transwomen are exactly the same as biological women. And if you don’t accept that, you are automatically demonized, as she was, and are liable to lose your job.

Here’s my own view on this.  I think transsexuals of any kind are entitled to every protection of the law. I will not publicly attack their claim that they are women. I will use whatever pronouns they wish.

But do I think they are exactly the same as biological women? No, not in every sense. In athletics, for example, I don’t think anybody should be allowed to compete with biological women if they simply identify themselves as transwomen (and remember, in many places all you need to do is claim that identity to be accepted). Even hormone therapy for transwomen athletes may not be sufficient to justify their competing with XX-born biological women, given the advantage in musculature and bone strength that remains even after treatment.

And I can see that there is real room for debate about issues like girls or women changing in a locker room in front of a transwomen with a penis, or with transwomen with penises demanding that they must have their genitalia waxed by beauticians who work on biological women. I can understand why a woman who has been raped would rather be counseled by a biological woman than by a transwoman, for biological women often have a long history of experiencing the kind of misogyny (including rape) that transwomen (who face their own set of problems) haven’t experienced. Finally, it sticks in my craw to say that a man can get pregnant or have periods.  (I’ve long rejected the claim that there is no strict binary for sex: there is a strong bimodality—in effect a binary—with only a few intermediates, although for gender there are more intermediates but the situation still approximates a binary and is surely bimodal.)

So the question of “is a transwoman identical to a biological women?” has to be answered “for some purposes yes, for others no.”  I may be deemed a transphobe for saying this, but the views above are what I believe (at least right now), and I can argue for them rationally. There are valid debates to be had—debates that won’t occur if the Control Left simply shuts down those debates, deeming their opponents transphobes and trying to ruin the lives of those who don’t buy every single aspect of their ideology.

This shift from a “live and let live” to a “do what I say or else” movement is one reason I don’t identify with this activism any more. I loathe the idea of forcing people to say things they don’t believe, demonizing and ostracizing them for their dissent, and enshrining in law penalties for wrongthink. I am very happy to live alongside people whose faith makes them consider me a sinner. As long as they cannot touch a hair on my head or use the law to punish me for what I believe and how I live, I’m fine. But that pluralist worldview is anathema to the “social justice” movement, as it proves every single day.

. . .Note that the judgment against Forstater rests not on the idea that she is wrong but that her argument is fundamentally illegitimate and shouldn’t even be entertained, let alone accorded respect. It rests on the banishment of a valid viewpoint from all public debate on a highly controversial matter. When you study the actual judgment, though, you find a lengthy discussion of chromosomes, hormones, gender, and sex in a complex arena. It’s clear that this is a real debate, that we have only just begun to think it through, that there are some fascinating philosophical questions involved, and that more research and debate is needed. But the ruling determines that one side in that debate can participate only under the threat of punitive sanctions.

Here are a few of the responses to Rowling’s tweet given in the Vox article.

The best part of the Harry Potter fan community is that we read so much queer shit into JK Rowling's books despite her being a disappointing failure of a human who is probably horrified.

Tonks was definitely all kinds of gender fluid.

Every time you tweet defending racists, transphobes and abusers I swear my tattoo hurts. HP is everything to me and you’re slowly killing everything it represents.

Impressive that JK Rowling has managed to completely incinerate all of the goodwill she accrued from creating the most successful youth fantasy series of all time in just under a decade. Anything is possible, folks, if you just keep tweeting.

What many of these reactions have in common is that the Tweeters declare not only that J. K. Rowling is a horrible human being, but that her entire writing legacy, especially the Harry Potter books, is to be disregarded or ignored because of her “transphobic” tweet (i.e., she has “completely incinerated her goodwill.”) In fact, in one sense Rowling is right: gender is not the same thing as sex, and for that reason transwomen are in some respects not identical to biological women born with two X chromosomes and with the usual sexual apparatus produced by them. I hasten to add once more that no transsexual should be treated, in moral or most legal senses, differently from anyone else. Nor do I think one should denigrate or harass them by being disrespectful toward their wishes about how to be regarded or addressed. But who can deny that in some aspects of life—for example, athletics—the two groups are not identical?

Once again we see our society riven by three characteristics of extremists on both Right and Left: their ideological absolutism, their lack of empathy, and their Manichaean view of people, who must be seen as either 100% good or 100% evil.