“Haredim” refers to ultra-Orthodox Jews, who constitute over 10% of the population of Israel. There are also many in New York State. They willingly live a cloistered life, having very little contact with other communities or even with less orthodox Jews.  In fact, they’re the most cloistered religious community I know of, though Jehovah’s Witnesses and some Islamic communities can be pretty cloistered, with all of these having the practice of disowning those who leave the faith.

The worst part of all such groups, and especially the Haredim, is their inculcation of the religion in children who never have a choice. This propagandizing, and forcing children to live in a restricted way, is considered by Richard Dawkins to be child abuse, and I agree. If I had my way, children wouldn’t be forced to adopt a religious belief until they had the maturity to choose, but that’s hardly possible with groups like the Haredim, whose children are raised entirely in the faith. And what a constricted life it is! Cut off from the rest of the world, boys are forced to study the Torah for hours a day, while girls are groomed to be wives whose duty is submission and breeding. Education is almost entirely religious, and few go to college. They know virtually nothing of the outside world.

The costs of this abuse are graphically outlined in a new article in the Washington Post (click on screenshot below), detailing the life of Ruth Borovski, an Israeli Haredi Jew who left the faith—and was of course shunned by her family afterwards—after turning to an organization called Hillel, which specializes in integrating ex-Haredim into the “regular” world. (This is not the same Hillel that is an organization on college campuses.) 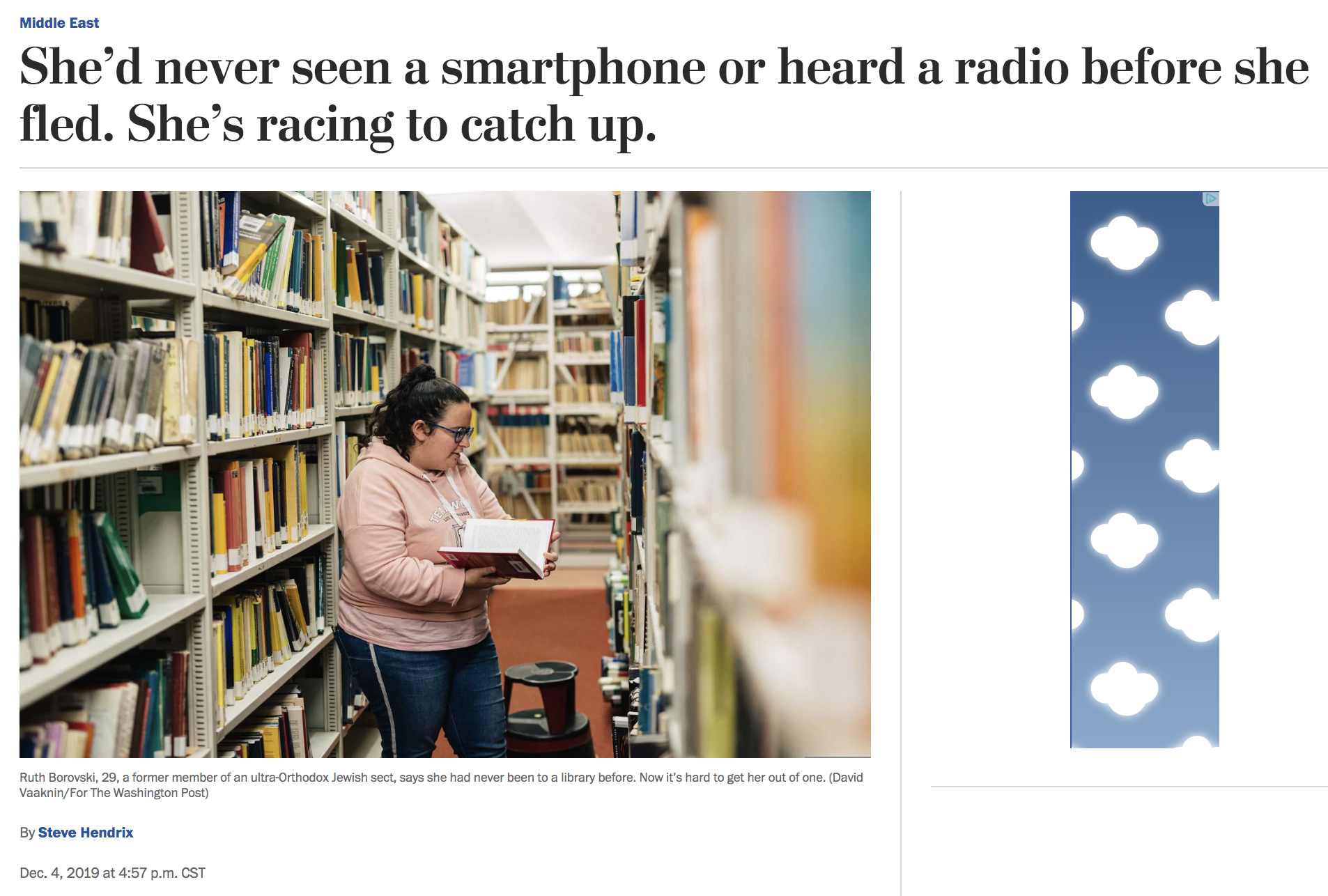 And it’s a hard job. Until now I hadn’t realized how very isolated these children are. Here’s a list of things that Borovski faced as a girl growing up in this oppressive sect. Note that she was 27 years old when she left, and yet:

If this isn’t child abuse, I don’t know what is. And it’s Borovski who said “The world is so much more than I ever knew.”  Ultimately, her story is heartening as she discovers all the good things she was denied as a prisoner of orthodox Judaism, but think of all the Haredi children who, propagandized in the faith, don’t even contemplate ever leaving it. And even Borovski lost nearly three decades of her life.  Would such children choose to live that way if they were exposed to the world before they could choose a religion?

All I can say is thank g-d for Hillel and organizations that help these people find their footing in the nonreligious world. (The Haredim regularly remove Hillel’s posters offering to help those contemplating deconversion.)

This kind of child abuse angers me immensely, for it robs children of their lives, forcing them into a constricted and regimented existence in fealty to a god who doesn’t exist. People may quarrel with Hitchens’s statement that “religion poisons everything,” but in the case of Borovski and her fellow Haredi children, it’s certainly poisoned their entire existence.

85 thoughts on ““The world is much more than I ever knew”: the constricted lives of Haredi Jewish children”