In Poland, Hili is scary:

A: You frightened me.
Hili: That was my intention. 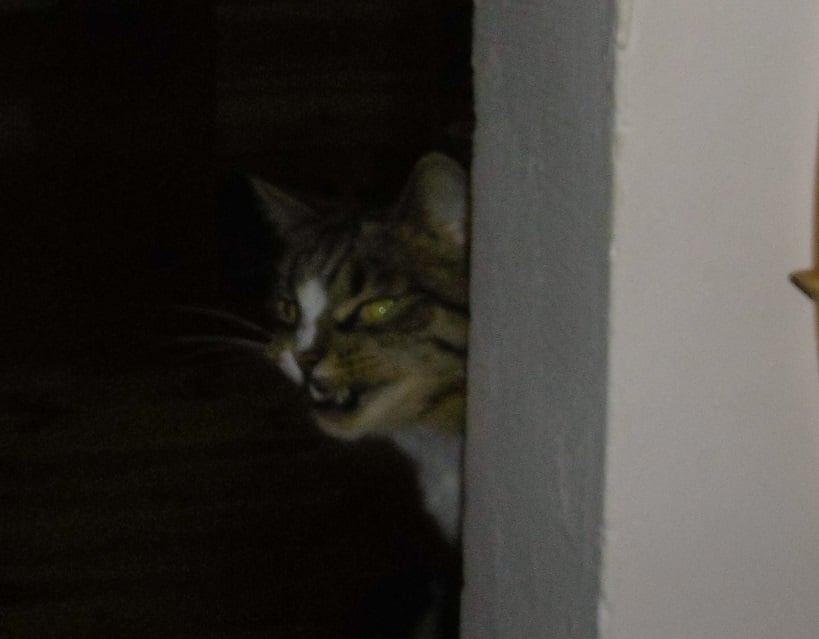 In Polish:
Ja: Wystraszyłaś mnie.
Hili: Taki był mój zamiar.
Meanwhile, in the UK, it is cold and frosty down on the farm, but the fowl are as keen as ever on their rush hour. This episode features a close-up conversation with Cuthbert the Goose. What is he thinking in his bird brain?

A number of folk on Twitter have been surprised by the chill:

Still -6. Not sure what temperature was overnight but had a real job defrosting the car to get my son to work at 6.30. pic.twitter.com/5lzaEQu3iN

Even the University of Manchester’s radio telescope at Jodrell Bank is looking a trifle cold:

It’s cold under the ocean, too, though not in the same way. Just hope you don’t meet one of these:

Yet another successful dive is over. We hope you can join us tomorrow for the final dive of the expedition. Our anticipated start time on the seafloor is ~9am ET. Until then, enjoy this dragonfish video: https://t.co/PYMGATaQ14. #Okeanos #deepsea #ocean #noaa pic.twitter.com/NyfrYcBQXC

And last night on the Okeanos feed we had this – sound on, mos def’. The fish head drifted down and was scavenged by the isopod (a relative of a woodlouse or a pillbug) – most likely it was dropped by one of the many squid we saw, because squid are, it appears from the experts on the commentary, “messy eaters”. Whatever the case, the isopod seems pretty keen to protect its find from the ROV:

Always a pleasure to see giant isopods during the @oceanexplorer #Okeanos live stream! This one was eating a piece of fish when it decided to flap away using its swimmerets.

Sound not needed but with it there's entertaining commentary by the science watchleads. pic.twitter.com/mvspcdefVt

A reptile in the air over Yorkshire, hundreds of millions of years ago:

An interesting-sounding article – maybe The Boss will write it up on his return from the Frozen South. [JAC note: I may well do!]

The things you see in Central Park:

The great horned owl at the Central Park Loch today.
.
Caught it staring at me, scratching and displaying its talons, then shaking its feathers, I guess, for the sheer joy of an itch scratched 😊 #birdcp pic.twitter.com/4R7R6NaNwt

People on Twitter are showing pics of themselves in 2009 and 2019. We can all sympathise with this I guess:

Finally, this looks like something out of a science fiction film (Annihilation comes to mind), but it is tragically real: