It’s a dreary Sunday in the Drake Passage—it’s almost always dreary here—as we make the two-day trip back to southern Chile.

We are halfway through the passage according to the ship’s real-time map, and may land in Punto Arenas a bit early. Passengers from this first trip are scheduled to debark on the 12th, with the ship turning around to start its second voyage to Antarctica, and then the Falklands (with me along), the same day. 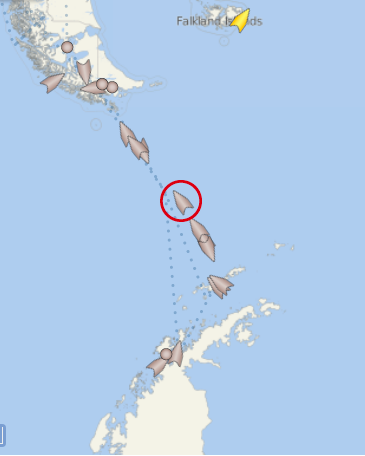 The ship’s antenna camera shows a gray expanse of water (the rolling horizon must be an artifact of the system). The waves were quite strong last night, with the deck rolling so vigorously that one walked like a drunken sailor, and one speaker had to hold onto the podium.

Below is tiny Half Moon Island, which I described yesterday morning.  It’s tiny, but often visited by tourists for its seabirds and easily-accessible chinstrap penguin rookery. Here’s a photo from Wikipedia, describing it as “Half Moon Island from Kuzman Knoll, Livingston Island, with Greenwich Island in the background”. (Greenwich Island was our first stop, where we visited a gentoo penguin colony.)

It looks like two islands, but is really one connected by a narrow neck of land: 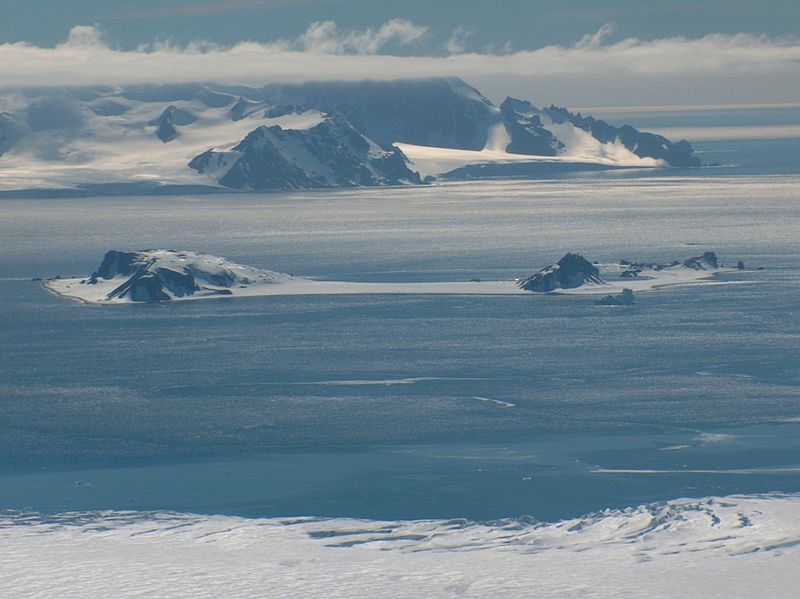 We had a two-hour walk on the island, constantly encountering chinstrap penguins at the rookery as well as some gentoos which hung out by the beach.

Here’s my photo of part of the lagoon, showing the  Argentine Cámara Base, a research and meteorological station (remember that I’ve degraded every image by at least 70% to be able to post them): 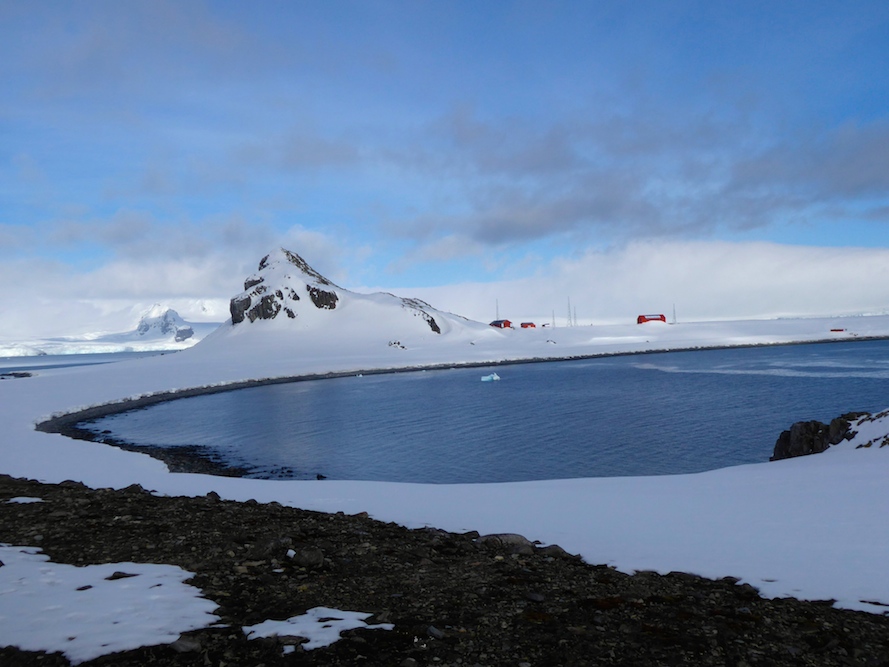 On the way to landing, we passed a fantastically-shaped iceberg: 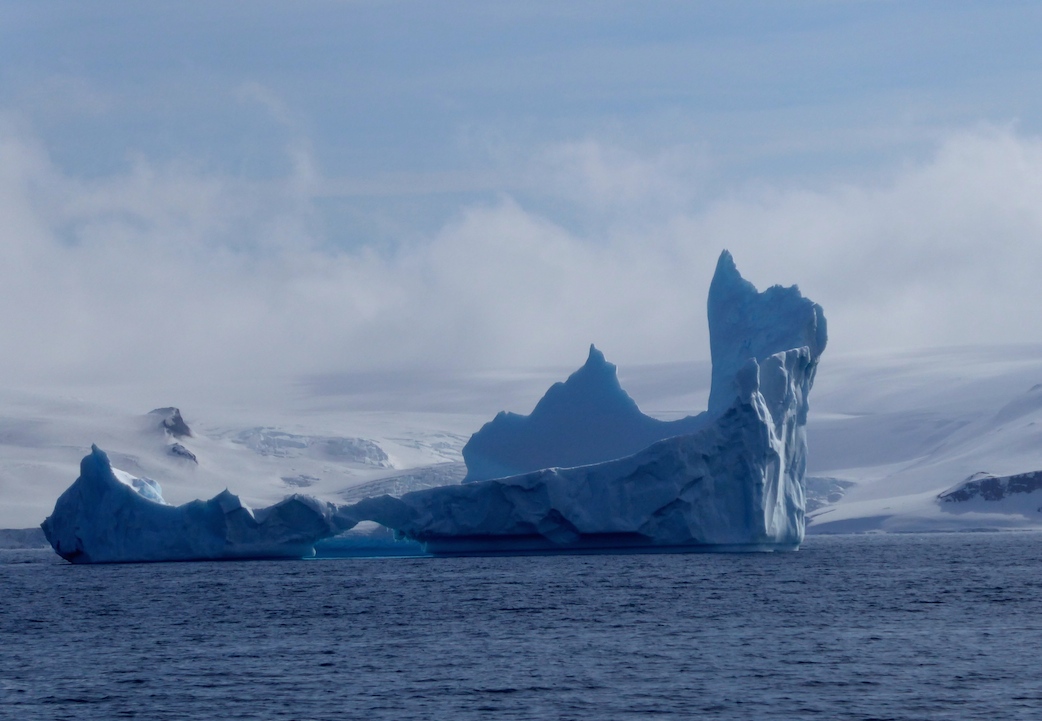 There are more than penguins on the island. Resident birds include the South Polar Skua (Stercorarius maccormicki). This one was resting on the snow. It makes its living by harassing other birds, forcing them to drop the fish they caught.  It’s also a bit carnivorous, eating other birds, and will even scavange carcasses. 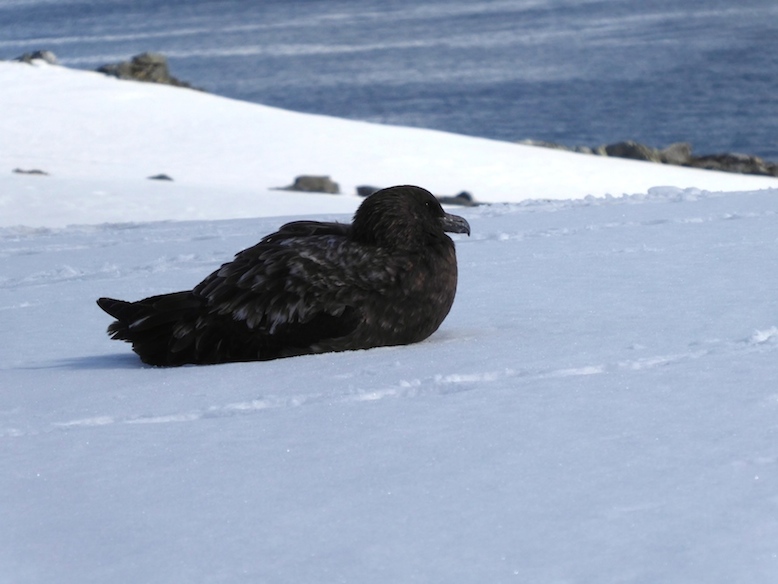 A Kelp gull (Larus dominicanus); there are five subspecies distributed widely in the Southern Hemisphere. 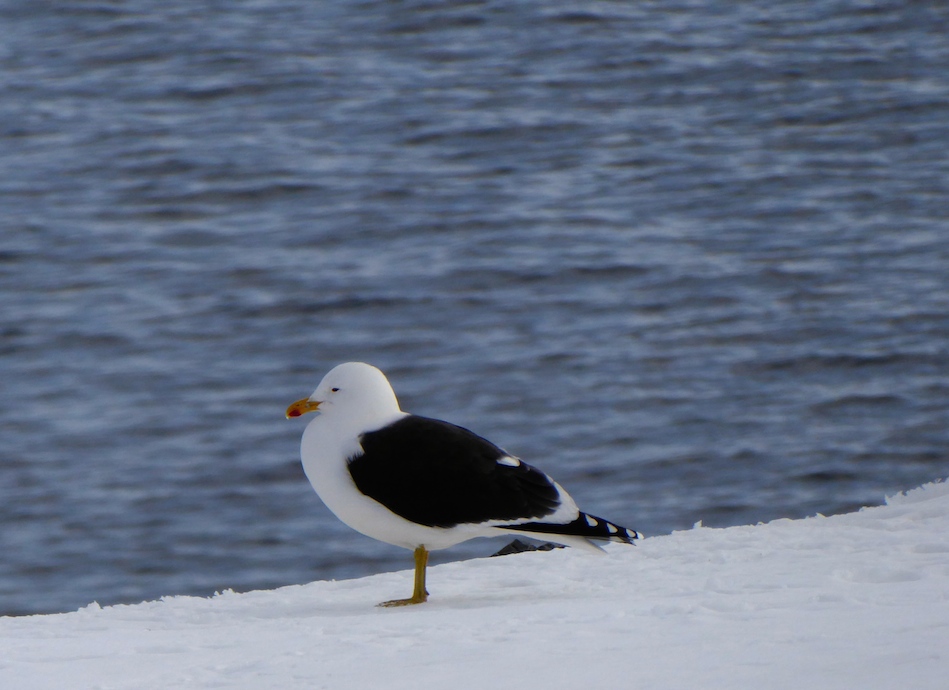 The bird below, a snowy sheathbill (Chionis albus), isn’t often seen on the island. Wikipedia describes it as “the only landbird native to the Antarctic continent.” It’s an opportunistic forager; Wikipedia adds this:

[It’s] an omnivore, a scavenger, and a kleptoparasite and will eat nearly anything. It steals regurgitated krill and fish from penguins when feeding their chicks and will eat their eggs and chicks if given the opportunity. Sheathbills also eat carrion, animal feces, and, where available, human waste. It has been known to eat tapeworms that have been living in a chinstrap penguin’s intestine. 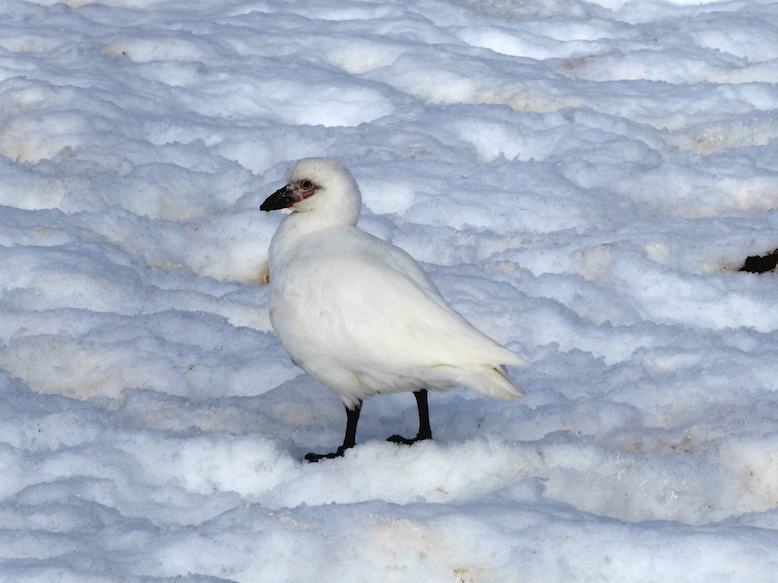 A gentoo penguin (Pygoscelis papua) who greeted us when we came ashore. I took videos of these penguins (as well as chinstraps) walking, falling, tobogganing, and preening, but can’t post them until I return to Chicago. Bummer. 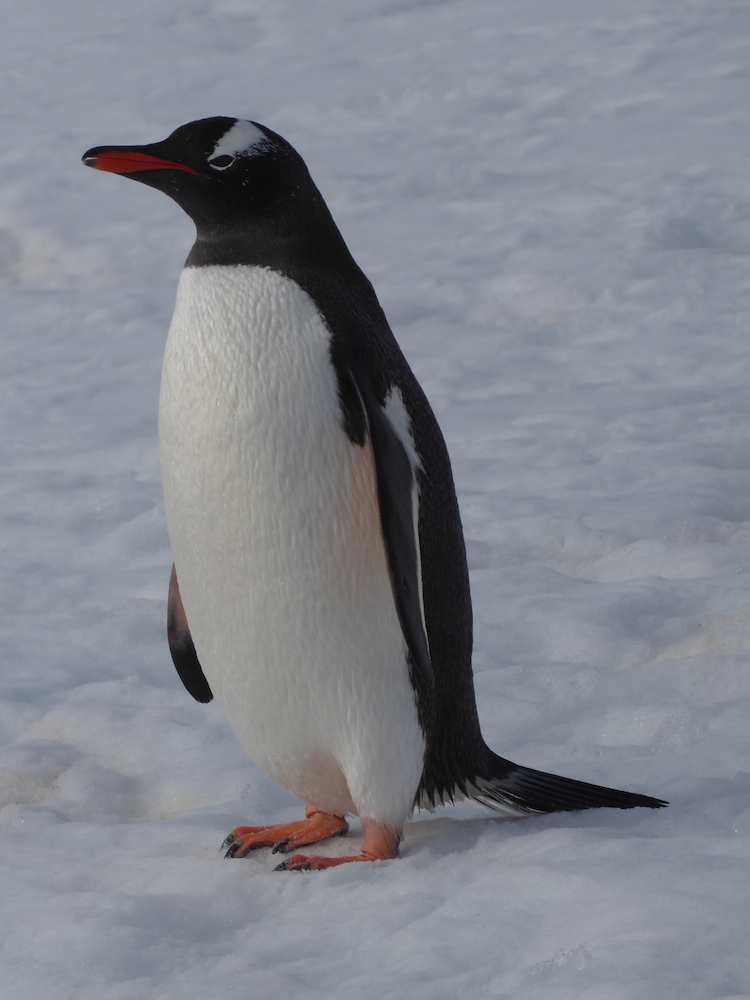 Part of rookery of chinstrap penguins (Pygoscelis antarcticus). The males were courting females and emitting constant cacophonous calls from their upraised beaks. 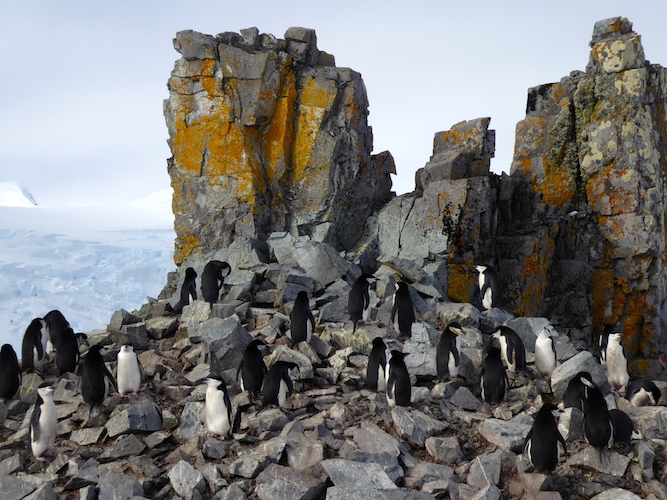 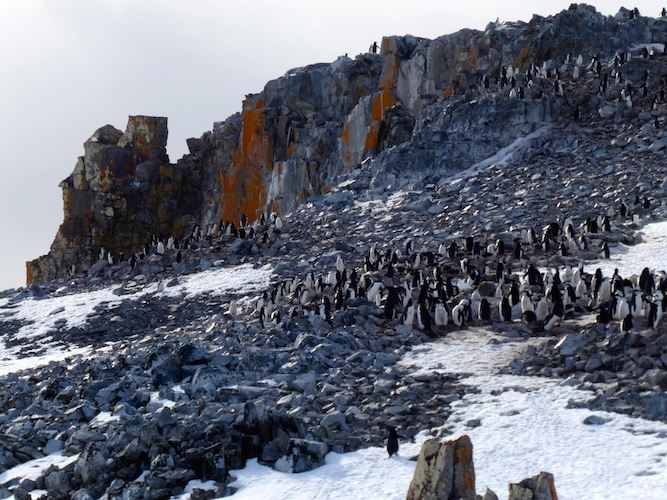 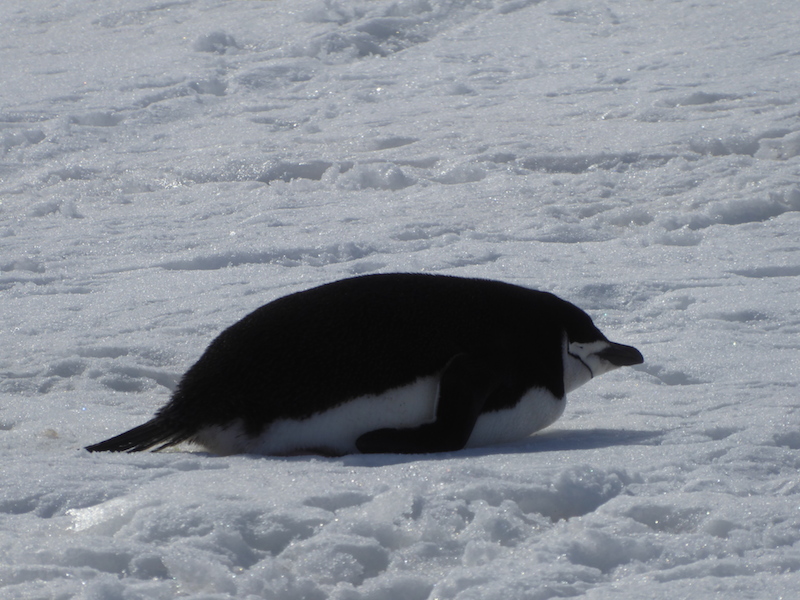 Chinstrap eating snow. One of the naturalists told us that they do this not only to hydrate, but to cool off. 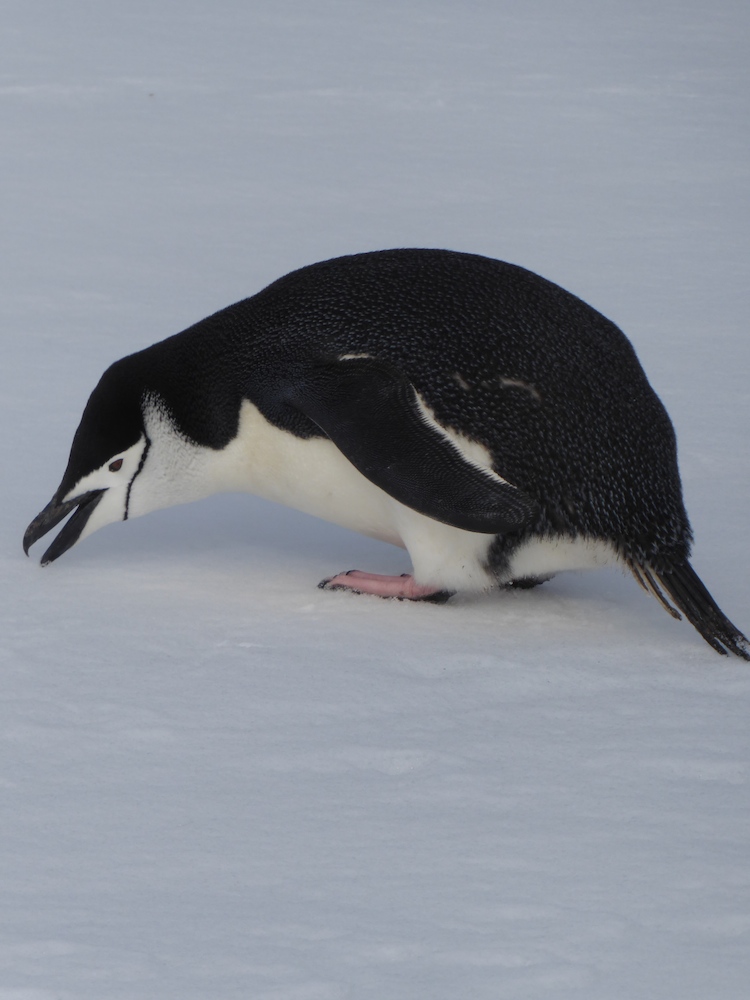 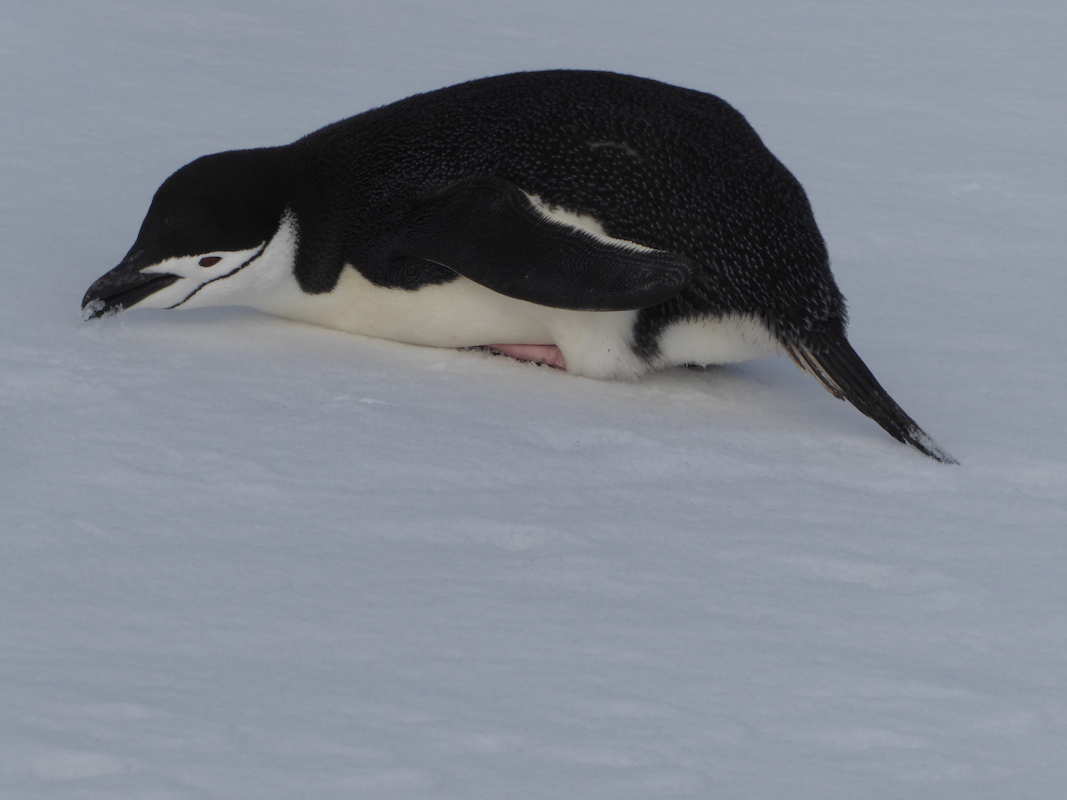 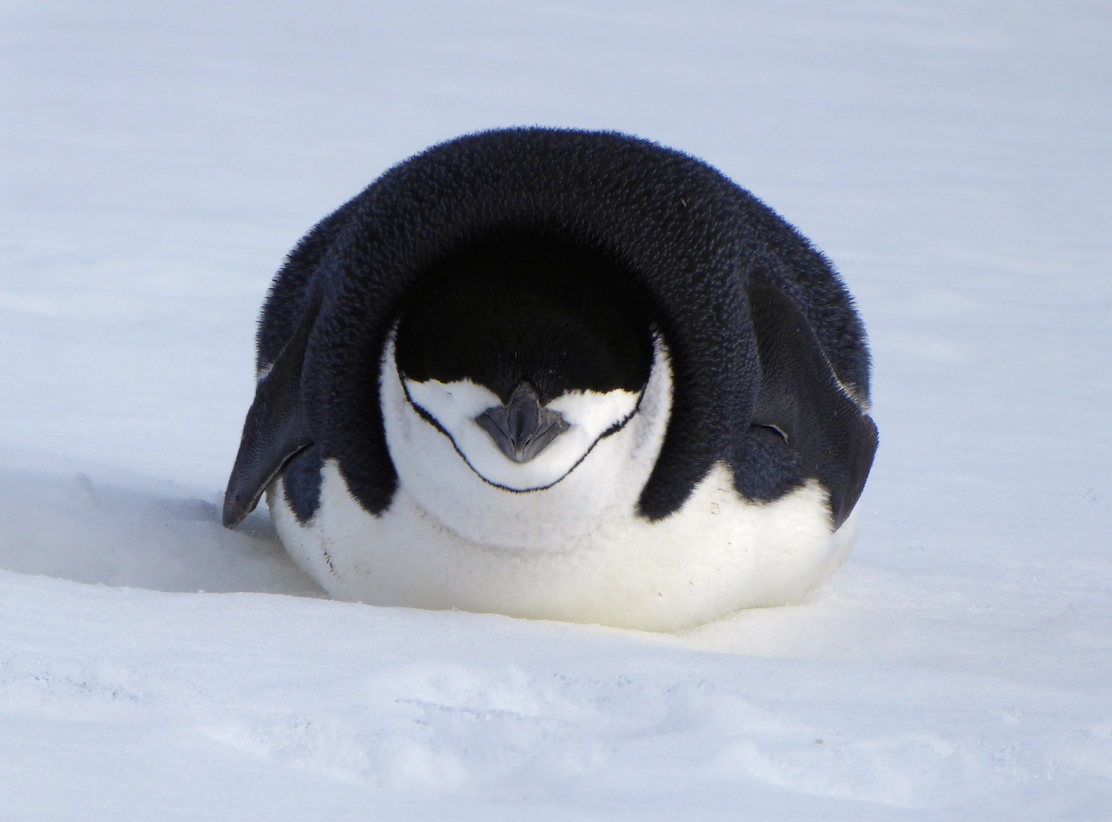 Another view of the rookery: 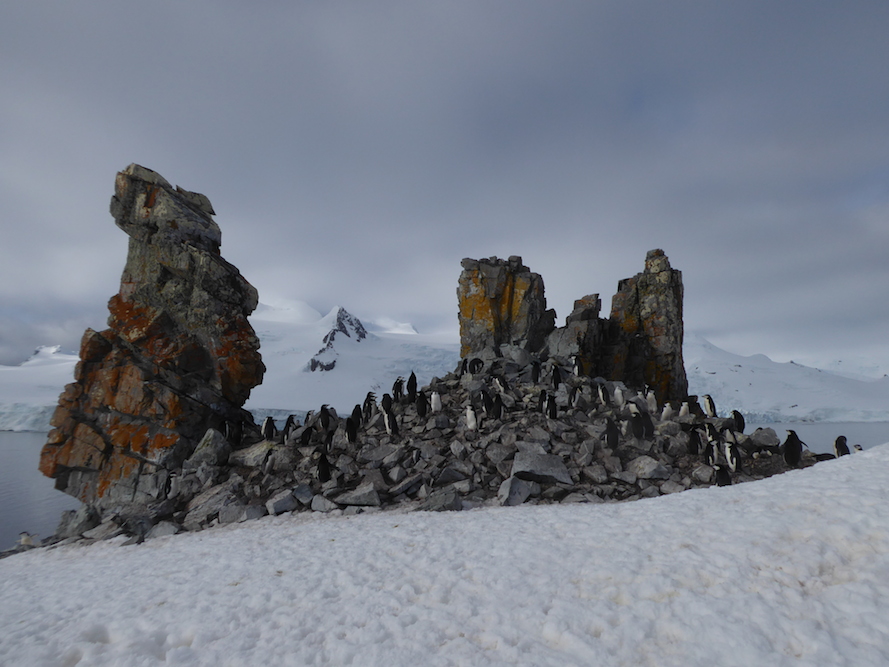 Three ways of looking at a gentoo: 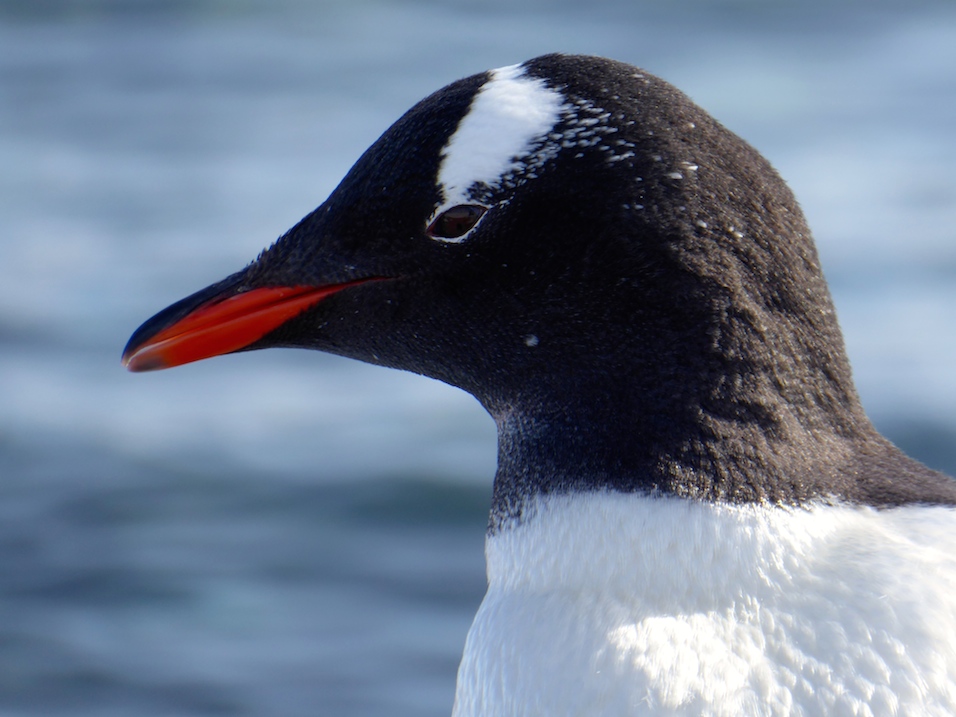 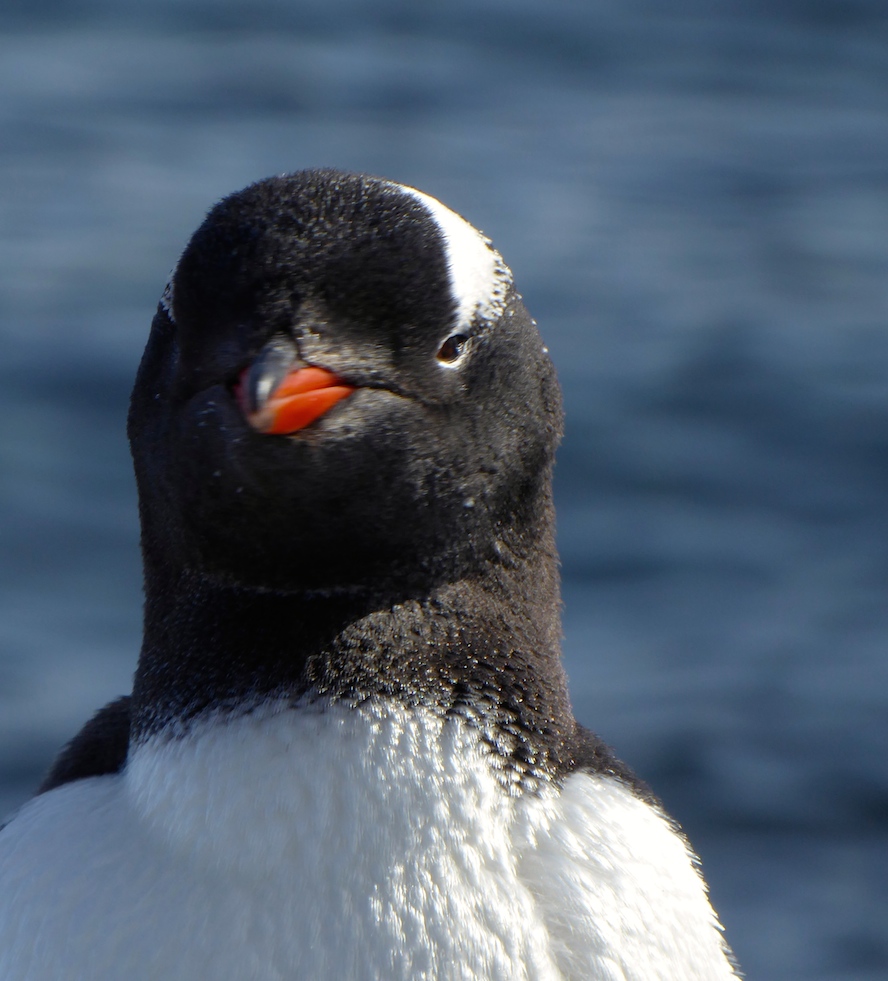 Note the serrated bill, useful for holding onto fish.

Leopard seals, the biggest predators of penguins, inflict tremendous damage on the birds. We were told that an adult leopard seal eats 6-7 penguins per day. This has led to the phenomenon of a “scape penguin”, in which a group of fearful penguins, ready to jump into the water to fish, hesitates because there might be a leopard seal below. One penguin then gets pushed into the water by the others, and if it’s not eaten the others jump in. 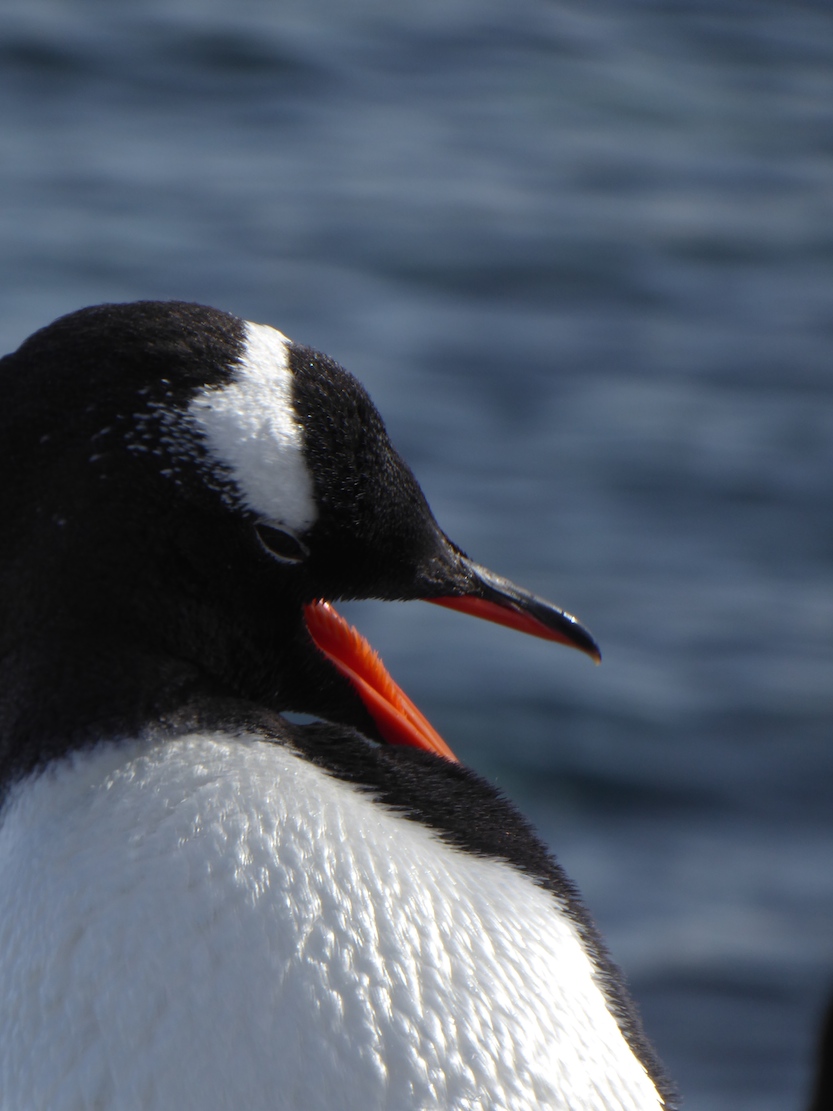 The Antarctic landscape is, I think, at its most magical when slightly overcast, or at sunset. After being here, I can better understand the “Antarctic fever” that grips people who visit again and again—or the explorers like Scott and Amundsen who, besides “conquering” the continent, admired its austere beauty. 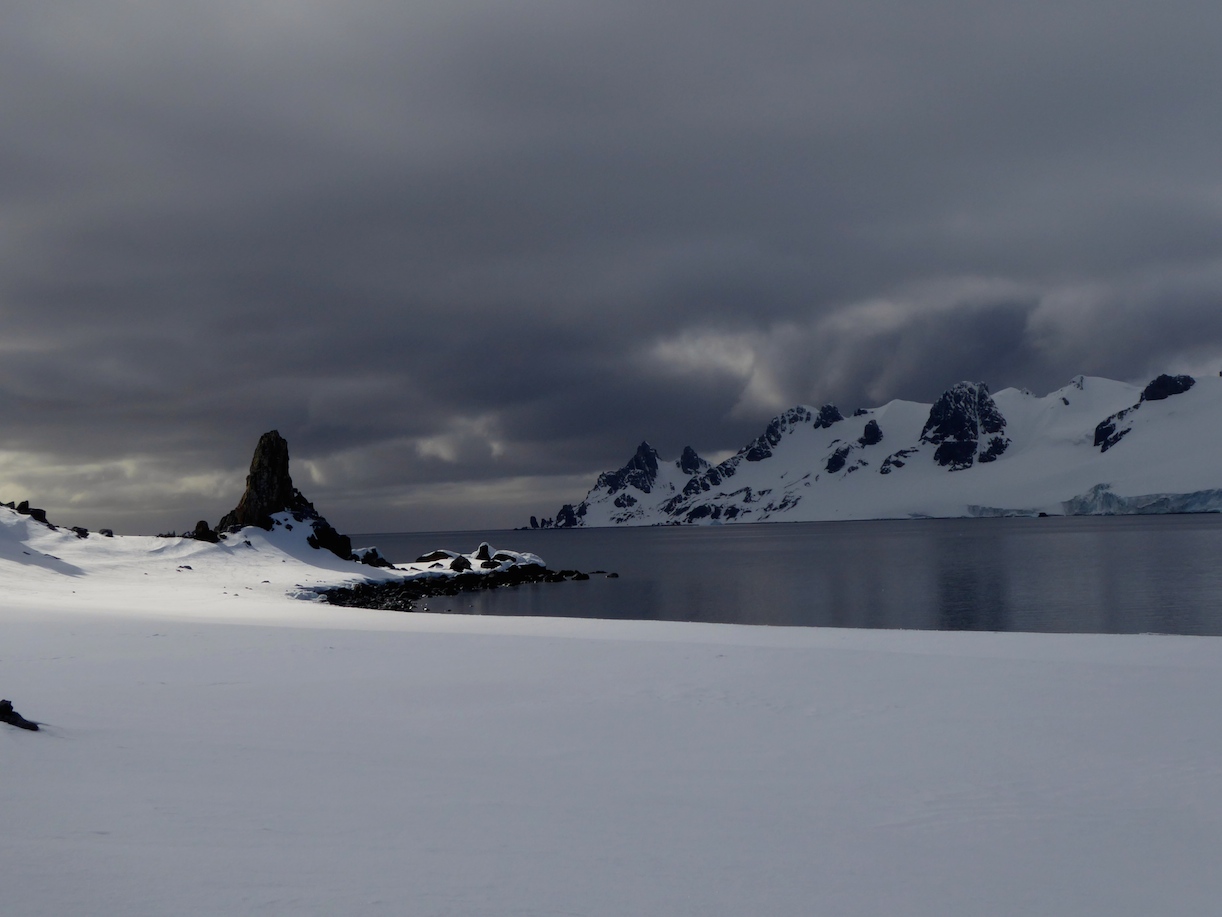 Finally, a stalwart group of passengers, mostly Europeans, took the “polar plunge”, in which they jumped into subfreezing water (-2°C), just to say that they’d done it.  Most people ran in and then immediately jumped out (the penguins nearby were puzzled at these large quadrupeds), but one woman actually did a lap around the bay. I probably would have immersed myself, too, but I forgot to bring a bathing suit (also useful for the jazuzzi and heated pool on deck!). I was even more regretful when I learned that you get an official certificate, giving location and water temperature, if you take the polar plunge. 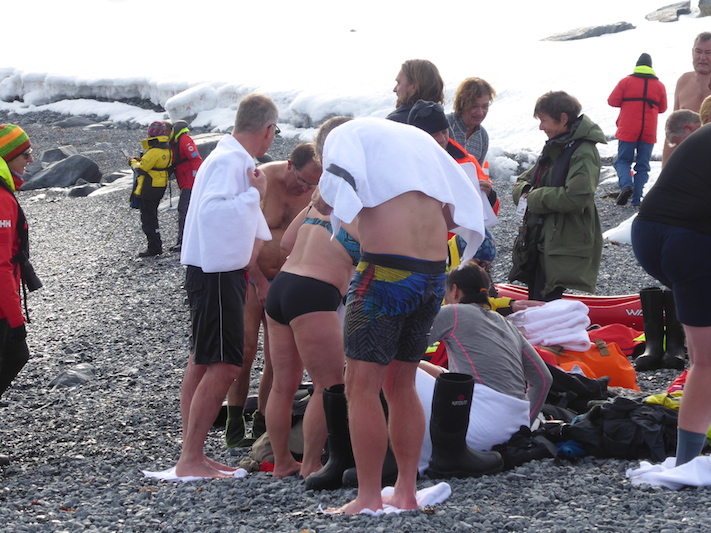 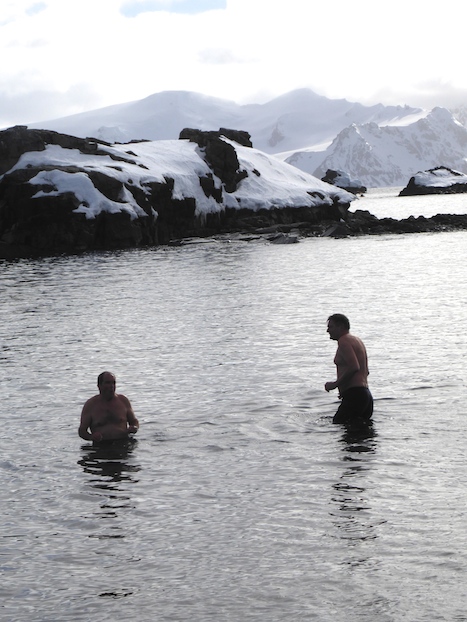 And so it’s back to Chile tomorrow. But I will return in a few days, and have a chance to see even more of Antarctica, as we spend a longer time there.

26 thoughts on “Penguins and other seabirds on Half Moon Island”