Good morning from Antarctica on Sunday, November 9, 2019. My first voyage will end the morning of the 12th, but then I’m off the same day on a slightly different cruise, this time back to the Antarctic peninsula for a longer visit and then on to the Falkland Islands, home of King Penguins and many other birds.

At the moment (6 am ship time), we’re heading north to Half Moon Island to avoid ice formation and to beat a storm that appears to be forming in the Drake Passage. Here’s our position, opposite the tip of the Antarctic Peninsula: 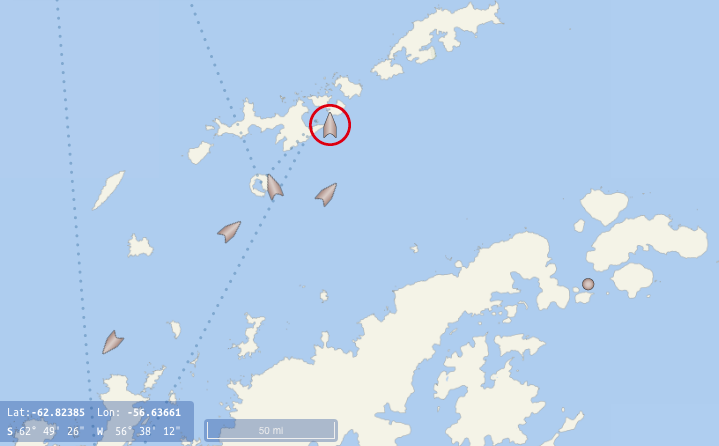 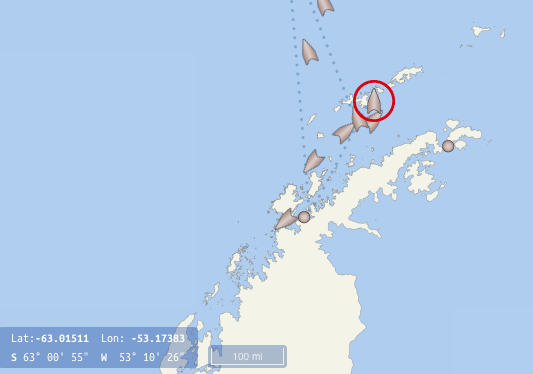 Here’s the current view from the ship’s Panomax camera. We’ve now arrived at Half Moon Island, and, at 6:45, the first group of passengers is already being ferried to the island.

Below is a map of is Half Moon Island, very close to Greenwich Island where we landed previously. It’s small but has penguins. Wikipedia describes it thusly:

Its surface area is 171 hectares (420 acres). The Argentine Cámara Base is located on the island. It is only accessible by sea and by helicopter; there is no airport of any kind. The naval base is operational occasionally during the summer, but is closed during the winter.

. . .The island has been identified as an Important Bird Area (IBA) by BirdLife International because it supports a breeding colony of about 100 pairs of south polar skuas. Other birds nesting on the island include chinstrap penguins (2000 pairs), Antarctic terns (125 pairs), kelp gulls (40 pairs), Wilson’s and black-bellied storm petrels, Cape petrels, brown skuas, snowy sheathbills and imperial shags.

Weddell and Antarctic fur seals regularly haul out on the beaches. Southern elephant seals have been recorded.  Whales are often seen patrolling the shores.

We haven’t yet seen whales (later note we saw a pair spouting at about 11 a.m.), but orcas in particular are our one remaining “target animal”. 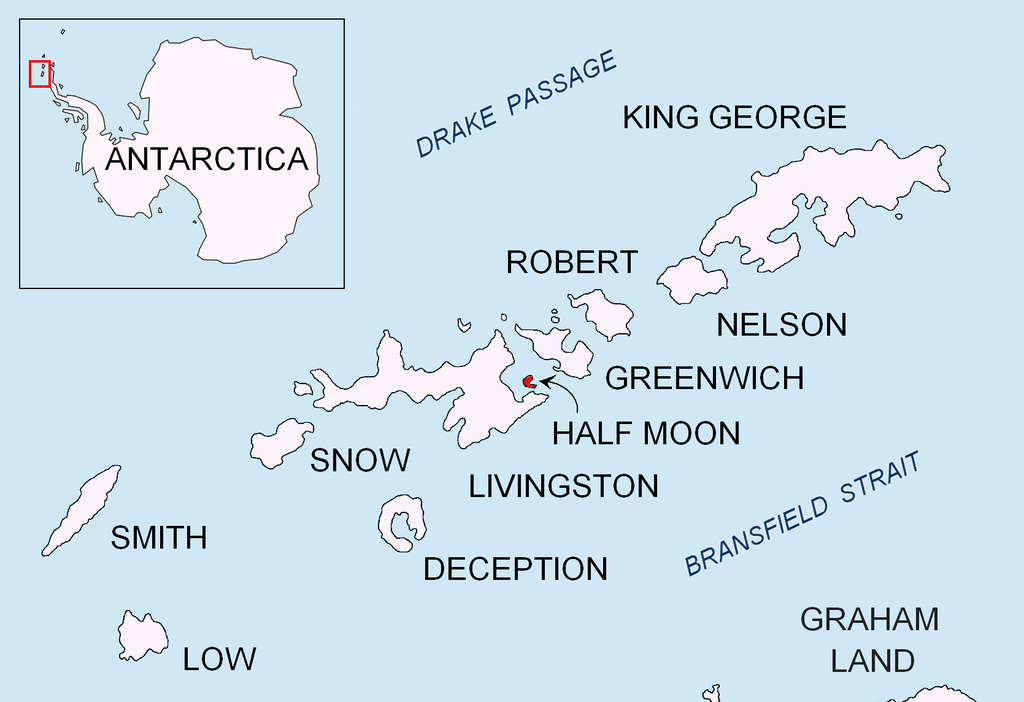 “(Coordinates: 64°37′S 62°32′W) is a cove one mile wide, indenting the west coast of Graham Land two miles southwest of Cape Anna along the Danco Coast on the west side of the Antarctic Peninsula. Discovered by the Belgian Antarctic Expedition under Gerlache in 1898. The name Orne Harbor was probably in use by Norwegian whalers, because it was used by Scottish geologist David Ferguson following his geologic reconnaissance of this area aboard the whaler Hanka in 1913.”

It also hosts a prominent mountain, Spigot Peak. The peak flanks the south end of the harbor, which you can see as a small bay in the second, zoomed-in map below. Orne Harbor is by Spigot peak; it’s not Neko Harbor (named after cats?). 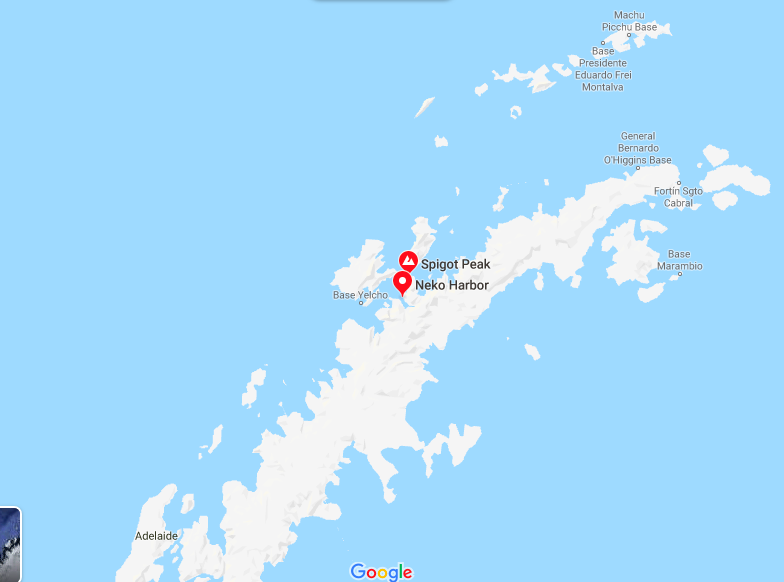 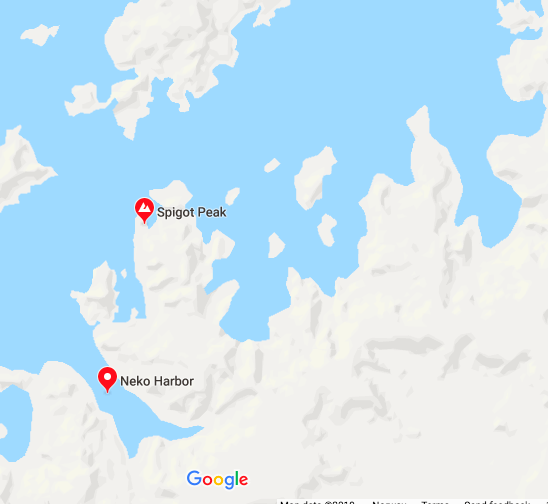 After a moderately difficult landing, you then climb all the way up the hill (not Spigot Peak), to where a colony of chinstrap penguins occupies a rocky area overlooking both sides of the islands. The young folk on the expedition team had gone ashore an hour earlier, making a zig-zag trail up the hill, marking it with flags, and putting “go no closer” flags to the penguins (about 5 m away).  Here’s the trail. (Remember that all photos have been reduced at least 70% in quality.) 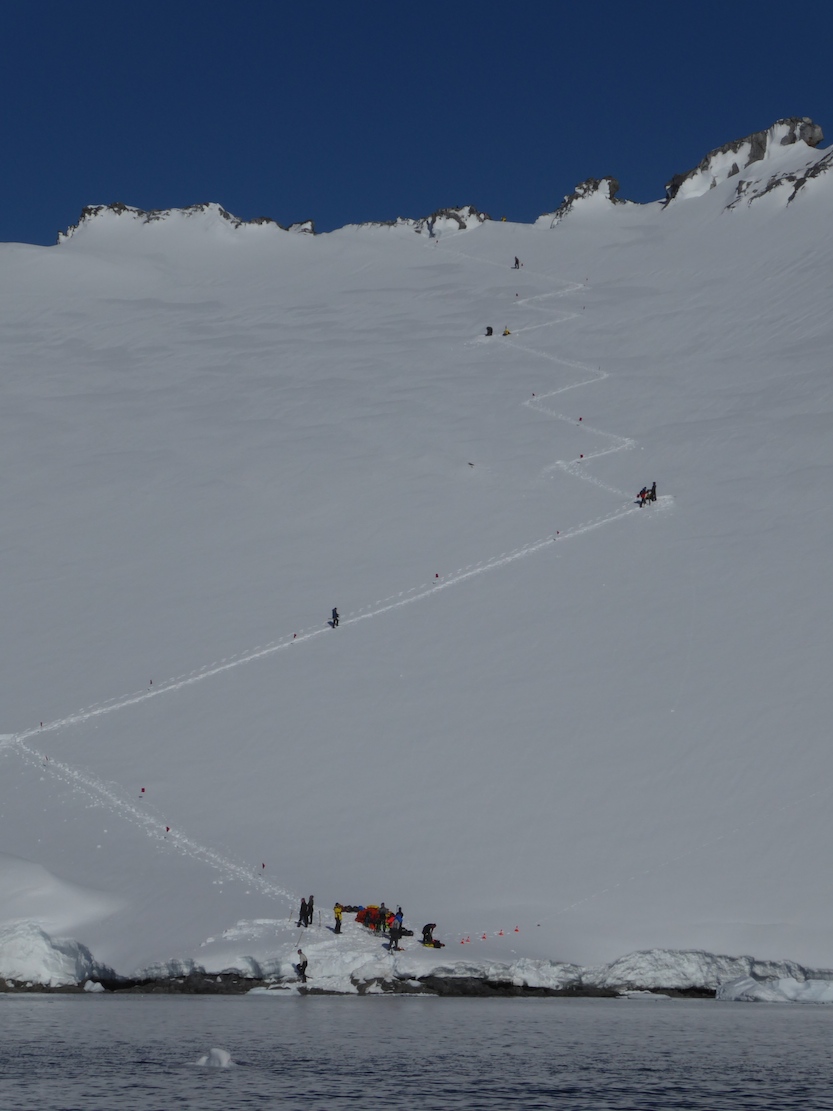 The view of the Roald Amundsen in the harbor, taken from the top of the climb: 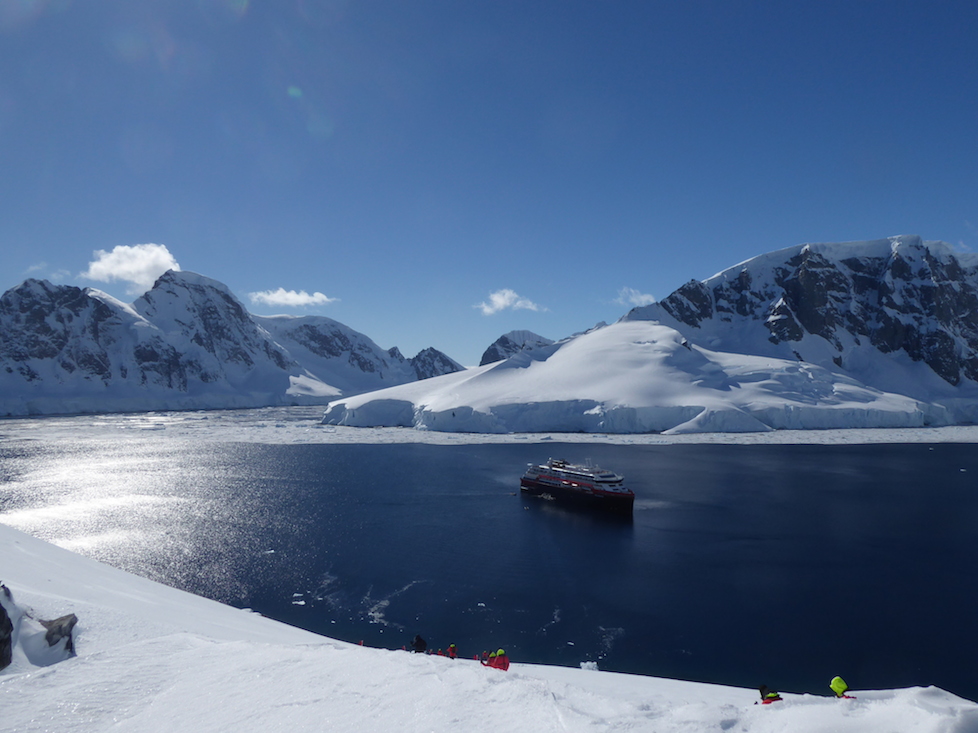 A small rookery of chinstraps at the top of the hill. It’s too early for laying eggs, but the males and females are checking each other out. 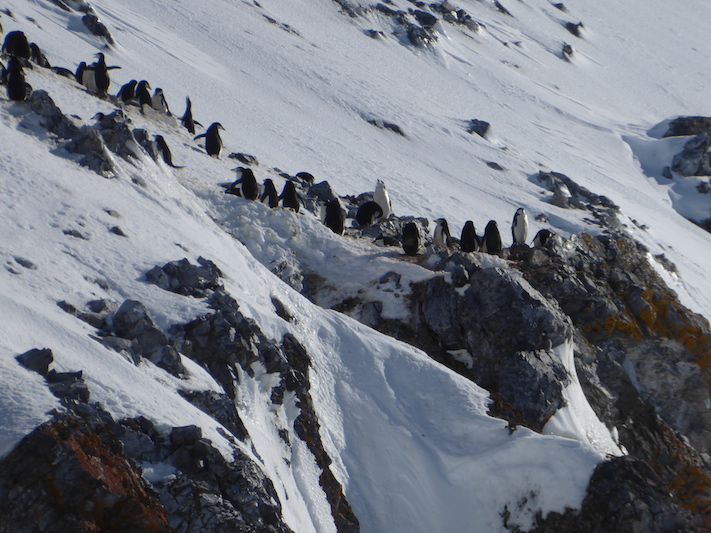 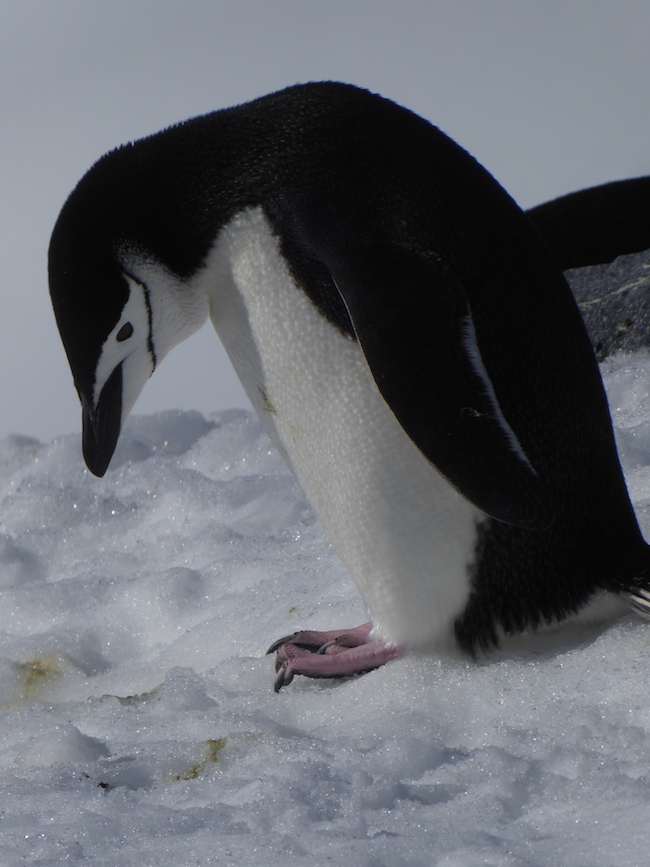 . . . but their bellies get dirty lying on the snow. I prefer the snow-white bellies! Note that the eyes appear to be at the same level as the divide in the bill: 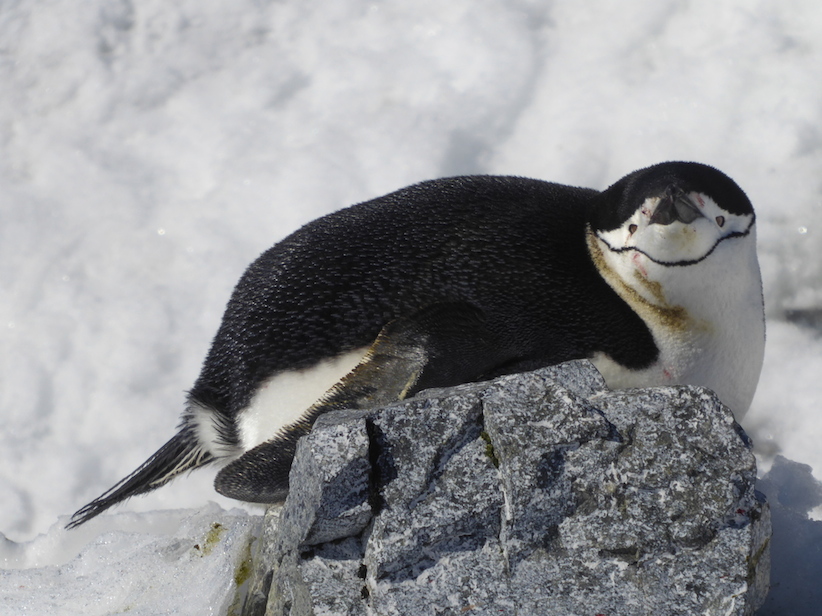 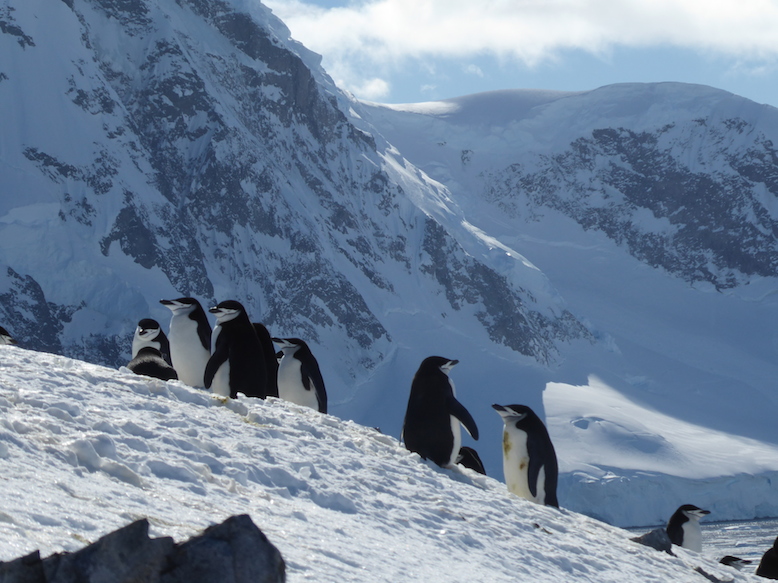 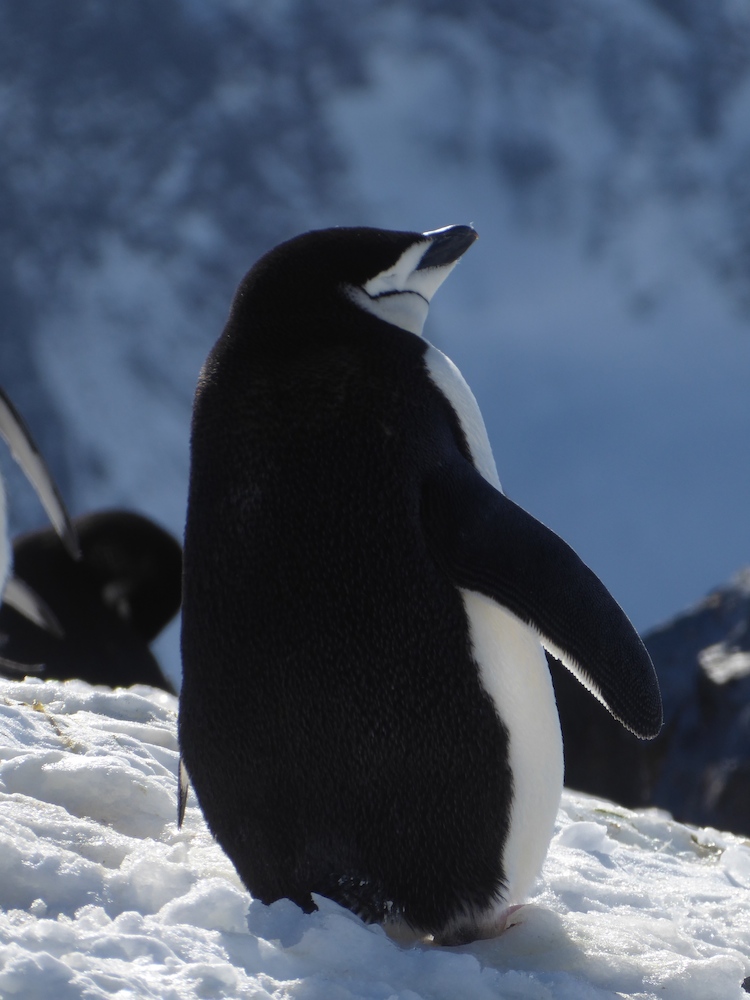 From the photo below you can get an idea of how far the birds have to walk up and down the hill to the bay. We didn’t see them doing it, and when I asked a member of the expedition team how, he replied, “They have their ways.” 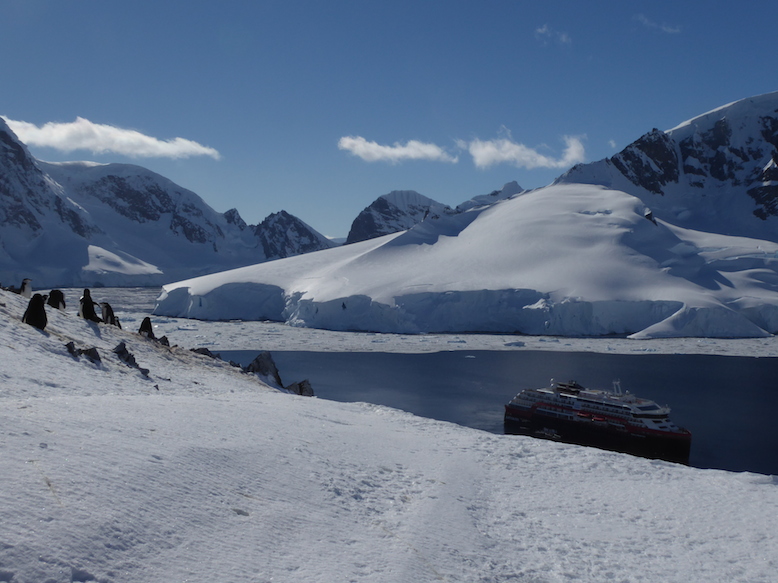 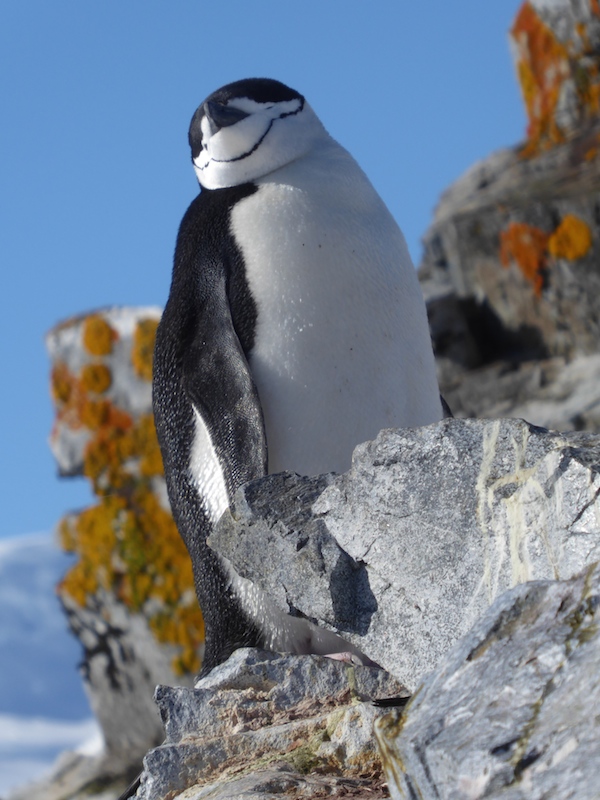 Penguin tracks on the hill: 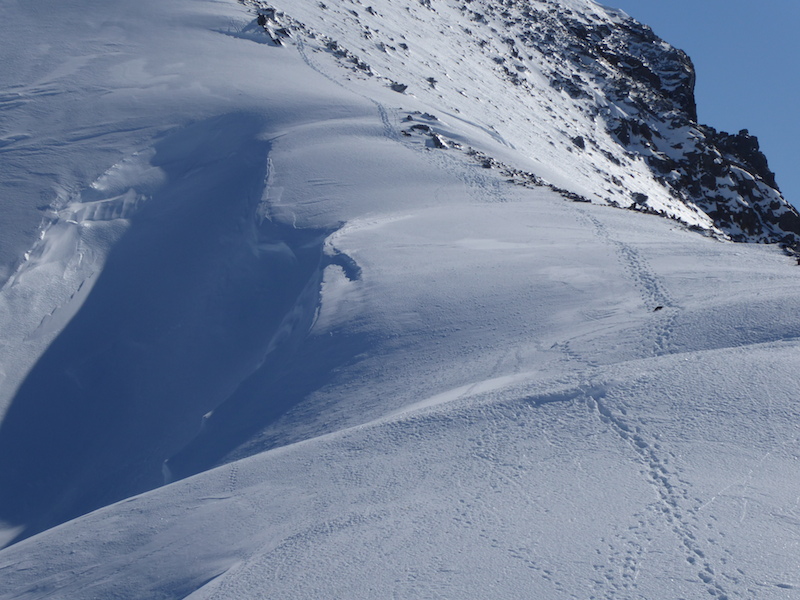 And a lone penguin about to trek down to the bay: 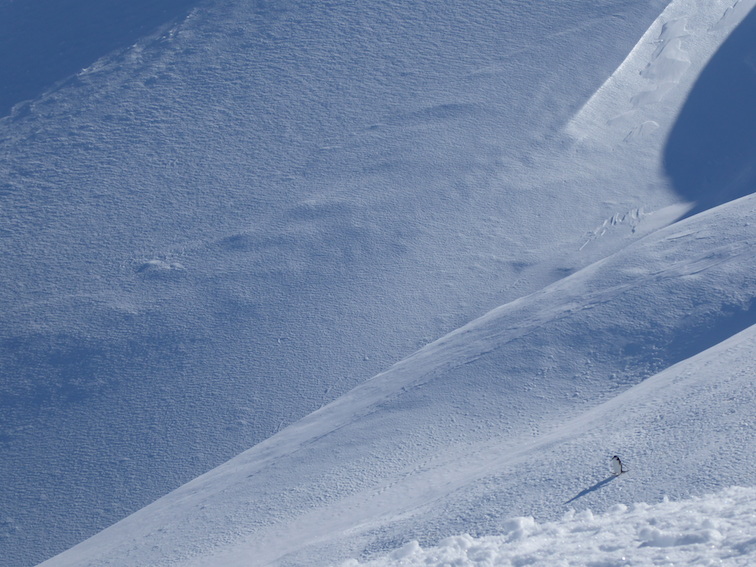 A view of the Zodiacs bringing passengers to the landing spot: 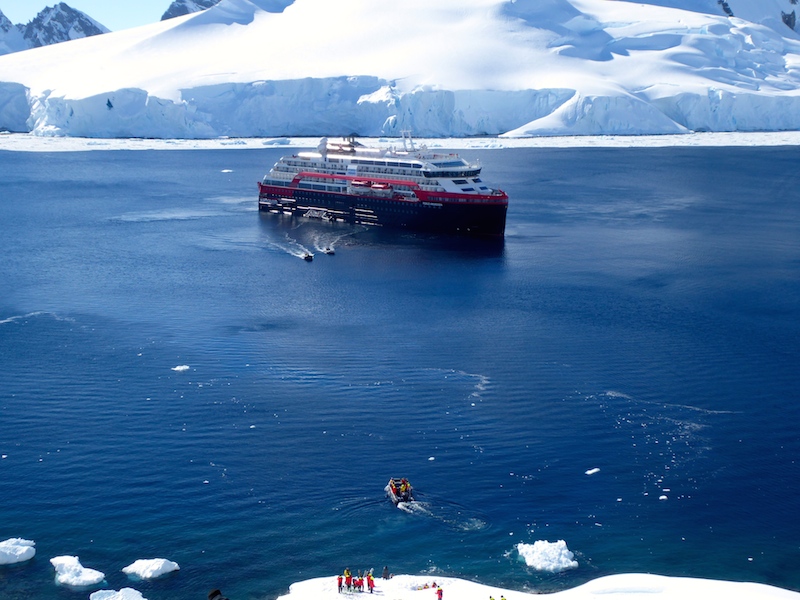 A panoramic shot of the bay. You can see the line of climbers ascending, antlike, about two-thirds of the way toward the right of the photo. (Click to enlarge and look for zigzag path of people.)

Two photos taken near sunset last evening (about 9:30 p.m). It’s hard to capture the palette of blues, yellows, and purples at any time, but hardest near sunset. The views are much more breathtaking than you can capture with a camera. 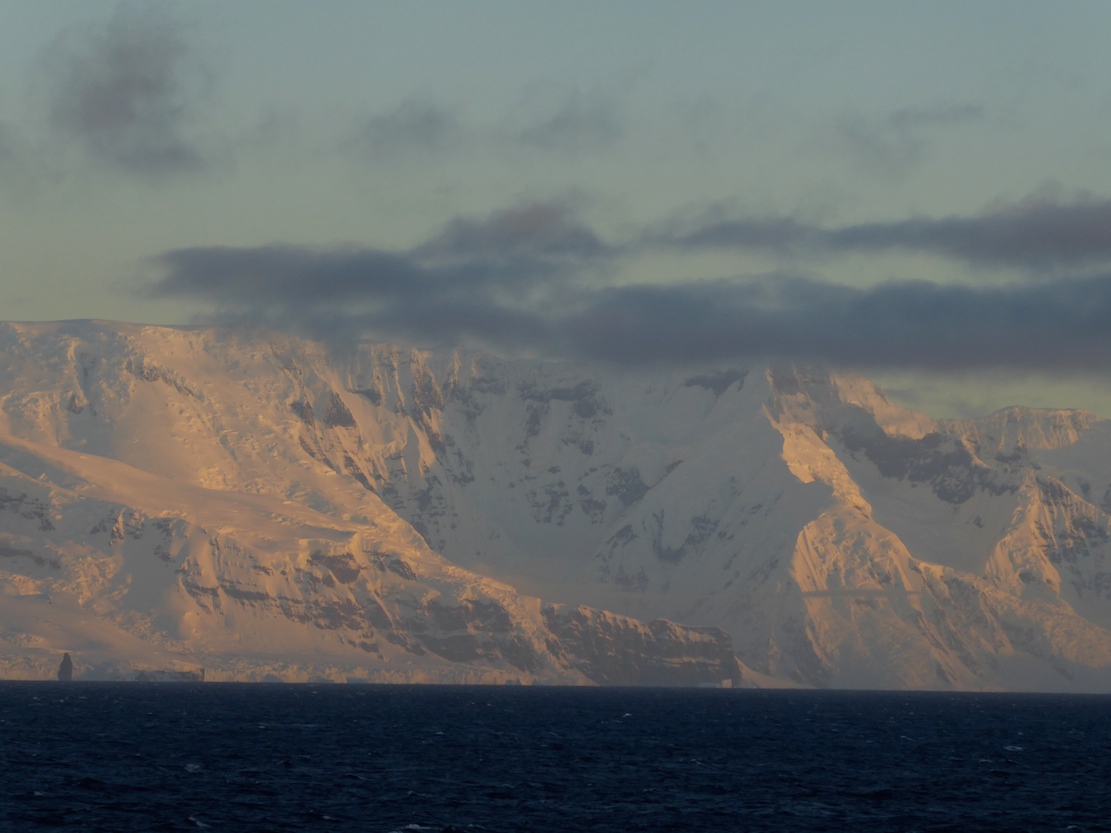 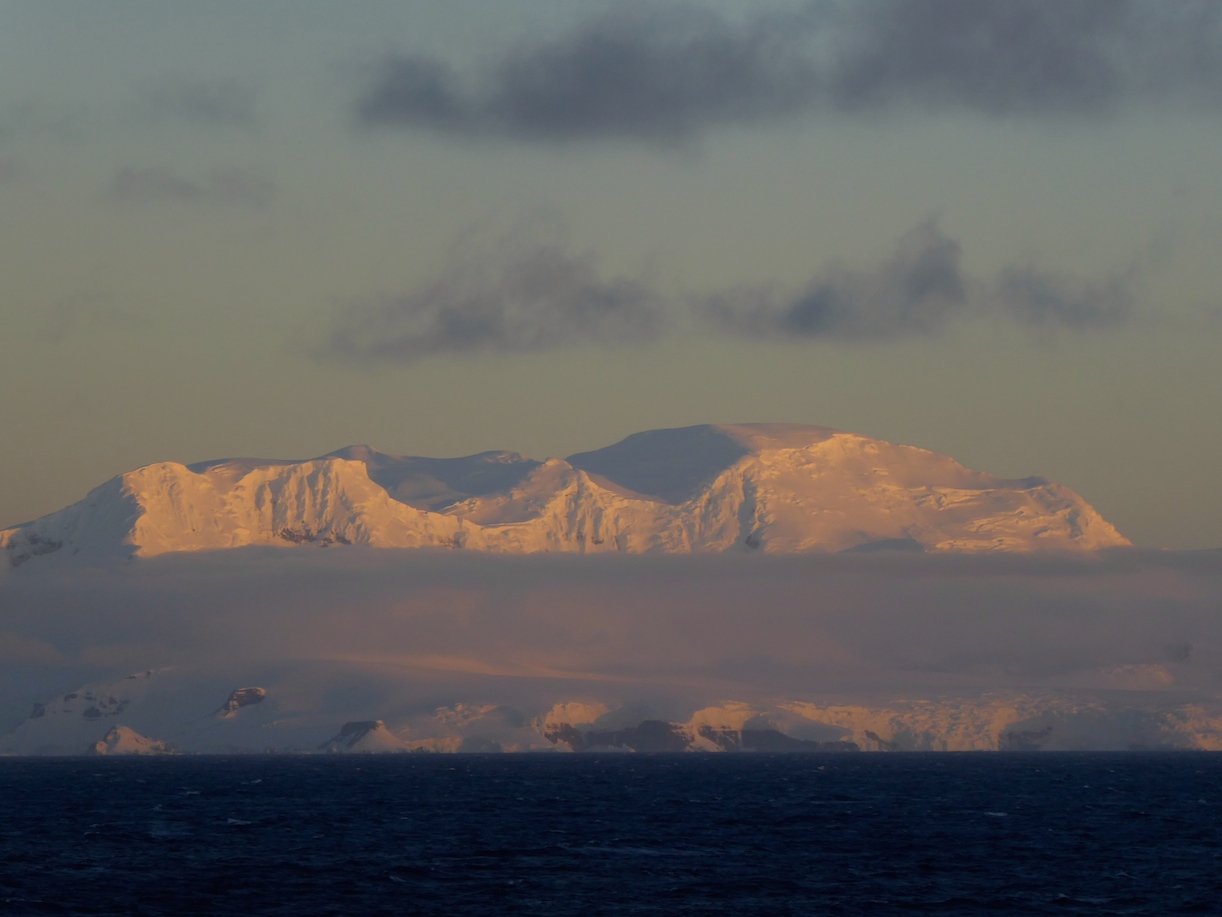 23 thoughts on “A climb to chinstrap penguins”