The ship’s live antenna camera is working at last. You can see it here, and it shows the expanse of the Drake Passage between Cape Horn and Antarctica, but perhaps you’ll also be able to see birds. We’re seeing tons of them, as well as high seas, out our window. Click on the screenshot to see the livestream:

The Drake Passage, one of three ways to get around the tip of South America (the other two are the Beagle Channel (through which we traveled yesterday) and the Strait of Magellan), is the most treacherous, as the Drake involves a transit through open—and often high—sea joining the Atlantic and Pacific.  Here’s its history from Wikipedia:

The passage receives its English-language name from the 16th-century English privateer Sir Francis Drake. Drake’s only remaining ship, after having passed through the Strait of Magellan, was blown far south in September 1578. This incident implied an open connection between the Atlantic and Pacific oceans.

Half a century earlier, after a gale had pushed them south from the entrance of the Strait of Magellan, the crew of the Spanish navigator Francisco de Hoces thought they saw a land’s end and possibly inferred this passage in 1525. For this reason, some Spanish and Latin American historians and sources call it Mar de Hoces after Francisco de Hoces.

The first recorded voyage through the passage was that of Eendracht, captained by the Dutch navigator Willem Schouten in 1616, naming Cape Horn in the process.

Here’s the Beagle Channel (photo by Ted Wakabayash; all pix from Wikipedia). It’s about 240 km (150 miles) long. But it, like the Strait of Magellan, is narrow, hard to navigate, and thus the biggest ships still go through the Drake Passage. 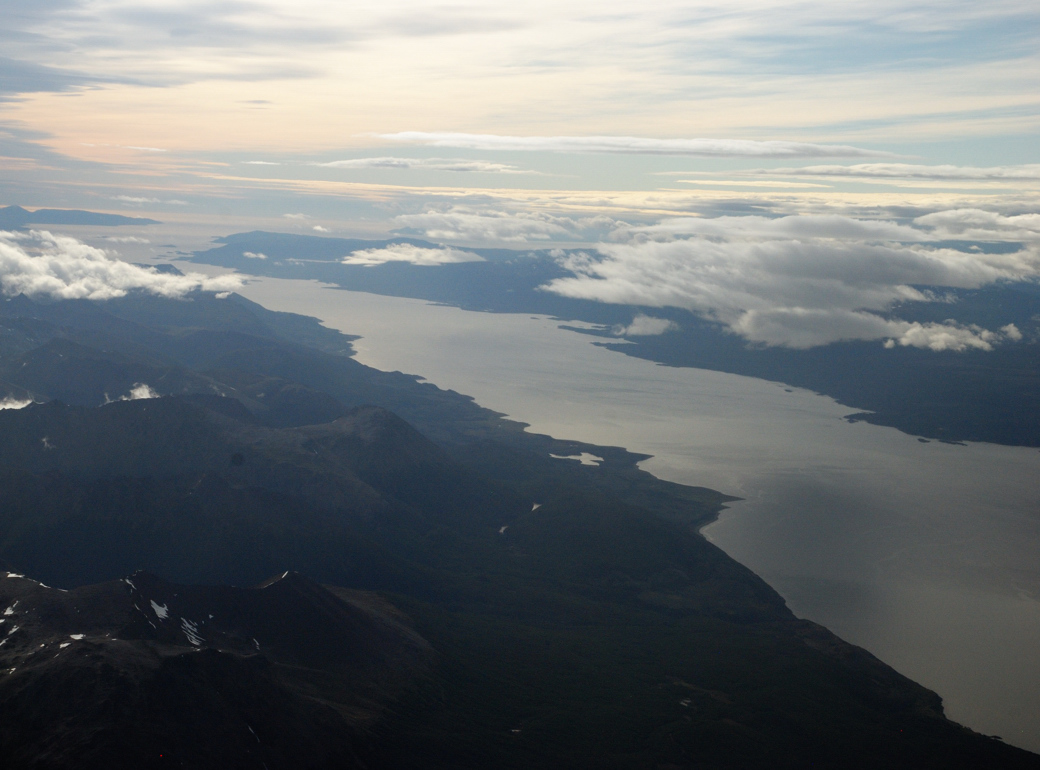 A map of the Beagle Channel, named of course after HMS Beagle that carried Darwin through it:

The Strait of Magellan, further north than the Beagle Channel and also said to be treacherous: 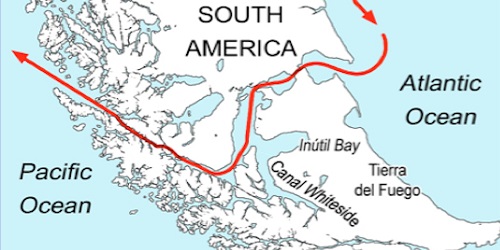 And the Drake Passage (the line marks the boundary between the economically claimed offshore territories of Chile (l) and Argentina (r): 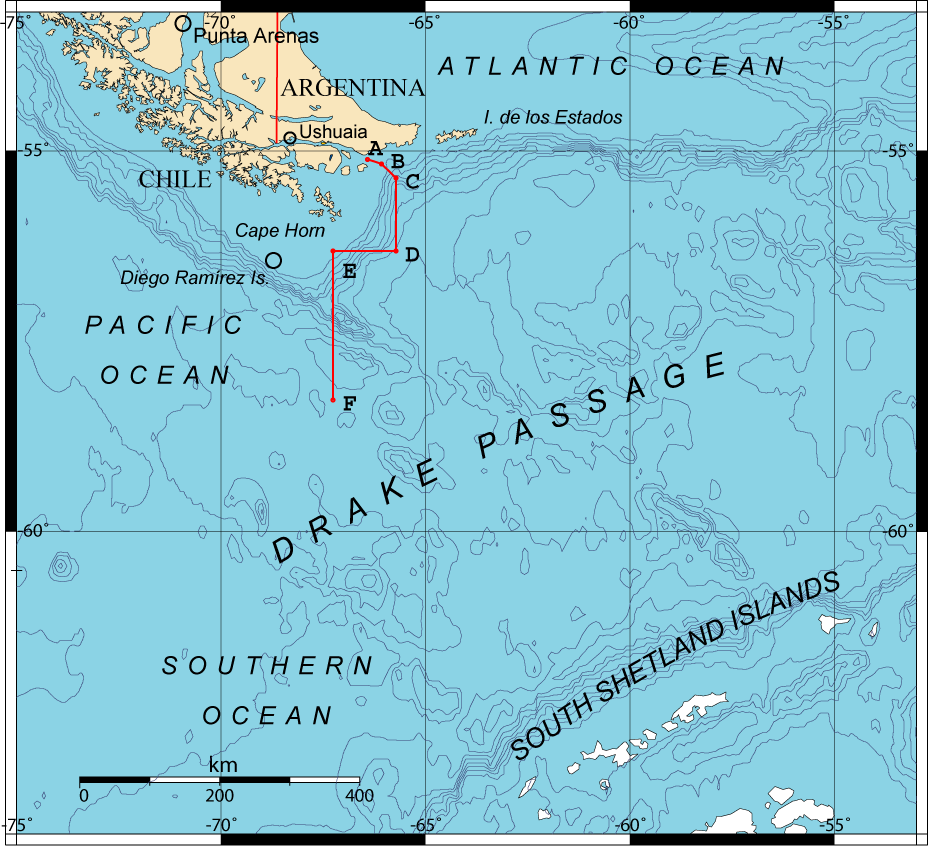 Our position at 5 a.m. Chicago time from “cruisemapper“; several ships are heading south with a Quark Expedition vessel in front of us: 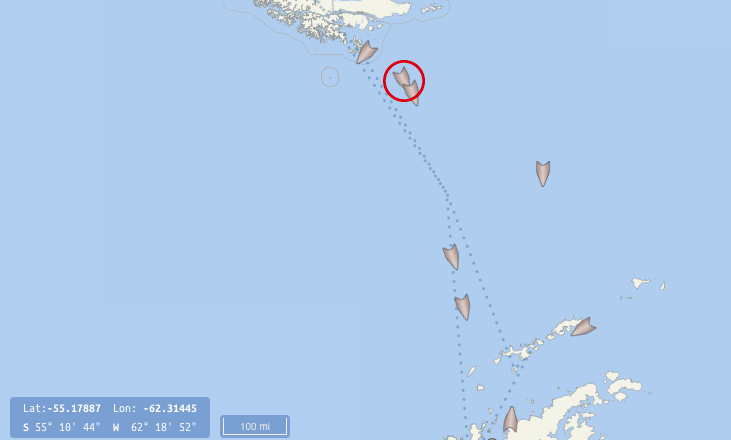 A zoom in (the Roald Amundsen is circled): 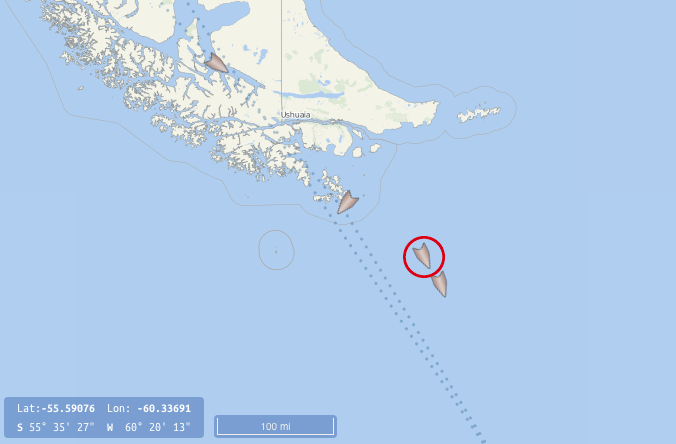 Last night we were holed up for five hours for “clearance” in Puerto Williams (population 2,874 in 2002), considered by many to be the world’s smallest city. As Wikipedia notes:

The port attracts tourists going to Cape Horn or Antarctica; its tourism industry developed around the concept of “the world’s southernmost city”. Based on some definitions of what a city is, Puerto Williams could in fact be the southernmost city in the world. However, others dispute this because of the town’s small size and population in favour of Ushuaia or Punta Arenas. Chilean and Argentinian media, a bilateral agreement between Chile and Argentina, and the Puerto Williams administration identify it as the southernmost city in the world.

. . . The Navy is based here in part to enforce national fishing rights in the exclusive economic zone around the southern part of Tierra del Fuego, where lucrative Lithodes santolla fishing is an important industry.

Lithodes santolla is the Southern King Crab, which has been served several times on the ship, and it’s delicious. But it also helped precipitate the “Beagle conflict” between Chile and Argentina:

The lucrative centolla fishery around Tierra del Fuego led to an incident in August 1967 when the Argentine schooner Cruz del Sur was found fishing 400 metres (1,300 ft) from Gable Island and had to be escorted out of Chilean waters by the Chilean patrol boat Marinero Fuentealba. This event among many others led to the Beagle conflict in the late 1970s.

Here’s Puerto Williams, which really is tiny. We weren’t allowed to go ashore, but there’s also a large naval base there, and the remnants of the tugboat that saved the crew of Shackleton’s Imperial Trans-Antarctic expedition (1914-1917) on Elephant Island. 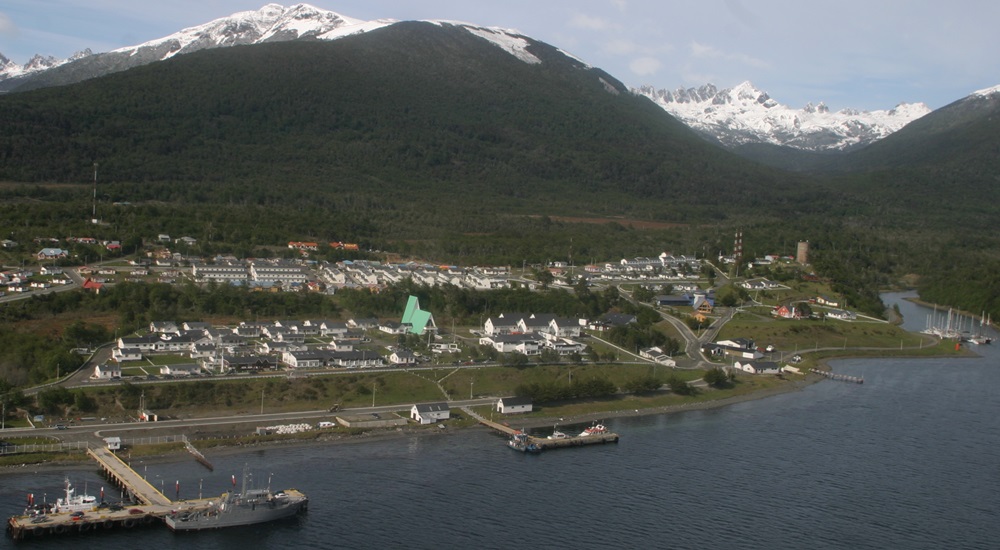 And you can read about “the Beagle conflict” at the link above.

The seas were very high and rough last night; the captain just told us they are 4-5 meters high. But we are heading steadily south towards the penguins and seals. There are tons of birds soaring and fluttering around the ship, mostly petrels and albatrosses hoping to get some fish stirred up by the ship.

Breakfast was deserted, probably because many people are seasick (not me), and walking during this turbulence is very difficult, even on a ship this large. One often has to walk sideways like a crab. Our bottle of wine toppled over onto the floor last night, but fortunately remained intact. Not so the entire presentation of bread, rolls, and croissants this morning, which crashed to the floor in the dining room, making a terrible mess. I have a nice picture of the staff scrabbling on the floor and cleaning it up, but smiling and giving the thumbs-up sign. I’ll post that when I have the ability to post pictures.