Regular readers of WEIT may recall that I have posted a few times about Okinawa, including pictures from a visit I made there in 2017.  One of the places I visited was Shuri Castle, a UNESCO World Heritage site which was the seat of the Ryukyu Kingdom for 450 years, from 1429-1879. Tragically, much of the Castle burned down yesterday, in a fire whose origin is not yet known. Here’s video from the South China Morning Post.

The Castle had stone walls and foundations, but its buildings were largely made of wood, thus making it vulnerable to fire. Here’s what it looked like after the fire.

I first heard of the fire from my daughter (who lived on Okinawa for two years), and I was actually somewhat relieved by seeing this photo. Although the destruction is great, it is not total. The main hall, the Seiden, is completely gone– it was a large building, and certainly the most important, at the east side (to the right in this photo) of the ‘striped’ courtyard– and the halls on its north and south flanks look badly damaged as well. But the westernmost halls, the outbuildings, and the gardens seem largely unaffected. I had feared that nothing had survived.

The following picture is of a detailed model in the Castle, showing Chou-Hai-O-Ki-Shiki, a court ceremony held on New Year’s Day. The court officials are facing the Seiden, which is now completely destroyed. This model was in the Seiden, and thus is now gone.

The one saving grace, besides the fact that several buildings and the garden survived, is that the Castle had been destroyed by fire several times in the previous centuries, and again in 1945 during the Battle of Okinawa during World War II. Thus, almost all of the Castle has been restored multiple times, and, although the craftsmanship of the restoration was exquisite, much of what was lost was already a modern restoration; it can be restored again.

I am uncertain how many original artifacts may have been lost. When I visited, the following bit of pre-World War II wall was preserved and visible inside the Sedien.

It was accompanied by this explanation.

This is the throne room in the Seiden, where the King of Ryukyu would hold court.

Here are details of the decoration; note the squirrels. 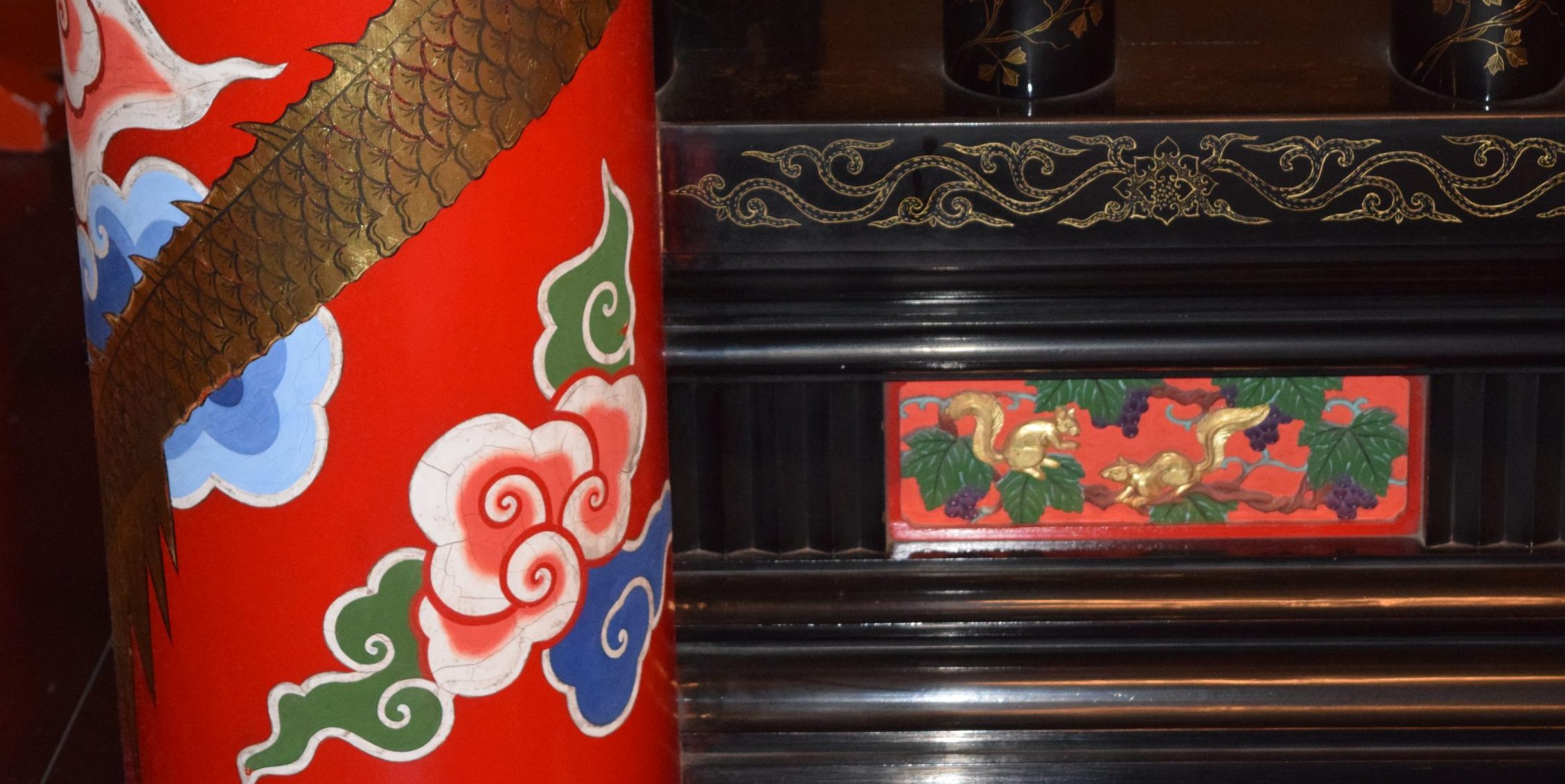 The artwork above, while exactingly accurate and exquisitely beautiful, is a late 20th century restoration. The crown of the King of Ryukyu was also a replica.

This is one of the buildings abutting the courtyard– I believe this one survived.

In addition to the main buildings and the outbuildings, the Castle had beautiful gardens, and these seem to have survived.

The gardens are home to habu— venomous snakes of several species found in the Ryukyus– and visitors are warned.

And Jerry would want to know that ducks were fairly common in the gardens– this is a Muscovy duck, a domestic species native to the Americas.

The Kingdom of Ryukyu comprised Okinawa and much of the rest of the Nansei Shoto, a chain of islands extending from Kyushu towards Taiwan. For much of its history Ryukyu was an independent kingdom, owing varying degrees of allegiance or fealty to China or Japan, depending on the strength and influence of those two greater powers. The Ryukyu King received a mandate to rule from the Chinese emperor, but the Ryukyuan language is Japonic, or a dialect of Japanese, depending on who you ask. (Readers may recall the old quip that “a language is a dialect with an army”; Ryukyu never had much of an army compared to China or Japan.) The state of tension between Chinese and Japanese influence was ended in 1879, when Japan effectively annexed the islands, and the last king was exiled to Tokyo, where he became a member of the Japanese nobility, but no longer a ruler in any sense.  Shuri Castle has great cultural significance for Okinawans and Ryukyuans, and indeed, should for all Japanese; I hope both the national and prefectural governments will commit to a new restoration.

(For more on the history of the Ryukyus, see George Kerr’s Okinawa: the History of an Island People. First published in 1958, the newer Tuttle edition has an afterword by Mitsugu Sakihara which updates and extends Kerr’s work.)