I don’t know why, but stuff like this depresses me and makes me wonder what the world will be like in 20 years, when students who passed this resolution are running the UK—and maybe the US. But I’ll most likely be dead then.

This event not nearly as bad as the Right supporting Trump, of course, but everybody writes about Trump while the mainstream and liberal media are reluctant to documenting the Authoritarian Left. (If you’re a reader, by the way, please don’t tell me to write more about the perfidy of Republicans. You can see that kind of discourse, whose sentiments I share, on every other site.)

So the latest occurrence is that Oxford University’s student council voted three days ago not to mandate the use of jazz hands in place of applause, but to “mandate Sabbatical Officers to encourage the use” of “jazz hands”, the British Sign Language equivalent of clapping. In other words, it’s not an absolute stricture but a strong recommendation as well as a requirement for officers.

There are three links below (click on screenshots); the indented bit here is from the Oxford Student.

BSL clapping is used by the National Union of Students since loud noises, including whooping and traditional applause, are argued to present an access issue for some disabled students who have anxiety disorders, sensory sensitivity, and/or those who use hearing impairment aids.

The proposers pointed out that alternatives to traditional clapping have been in place to aid accessibility in some organisations since 2015, when The New York Times for instance declared snapping is the new clapping.

Manchester Students Union made headlines when they led the way in passing a motion in September 2018 to use BSL clapping at their own student council.

And a peevish response from comedian Graham Linehan.

This is from the Oxford Student:

From the Times of London: 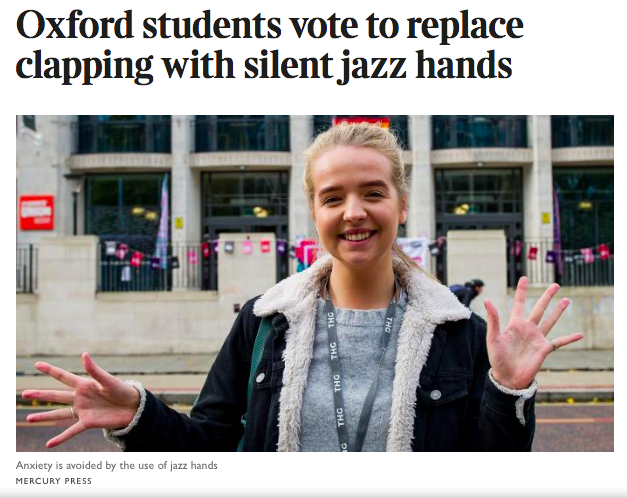 Now I understand that the desire of the Oxford student council here was admirable: to be inclusive. But catering to what “triggers” people is not a way to deal with the issue of triggering. As far as I understand, exposure therapy is what psychologists use to eliminate triggering, and in this case exposure would mean listening to applause.

Second, “jazz hands” can easily be construed as a racist gesture, even if it is part of British Sign Language. The Atlas Obscura, for examples, describes one proposed origin for the gesture in its article “The Fabulous History of Jazz Hands!”

The exact origins of jazz hands are a bit murky, but as with most performative dance, it likely has its roots in African dance traditions. “I see one thread of it coming up through the African-American foundation of jazz dance, and that authentic jazz tradition,” says Rebecca Katz Harwood, Associate Professor of Musical Theater at the University of Minnesota, Duluth. ”In as much as vaudeville grows out of minstrelsy, that’s another step backwards on the family tree of jazz hands.”

It’s likely that the simple act of shaking your hands as part of the performance came into use when vaudeville performers began taking their cues from these traditions. As vaudeville began evolving into film, it brought jazz hands with it. Some people contend that jazz hands can be traced back to Al Jolson’s 1927 film, The Jazz Singer. . .

. . . Some of Jolson’s moves are reminiscent of what we would call jazz hands, with arms outstretched and hands extended pleadingly to the audience, but his moves lack the signature shake. “When I think of Al Jolson, I think of the blackface and the white gloves over his hands. And of course part of what those white gloves do is draw attention to the hands,” says Katz Harwood.

Remember that The Jazz Singer features Jolson, a white man, in blackface. That, as I’ve said many times before, is reprehensible bigotry and not “cultural appropriation.” If “jazz hands” has its origin in African dance, then its use is “cultural appropriation,” and according to Woke Standards, cannot be used without simultaneous acknowledgment and apology.

Finally, while jazz hands may placate the small minority of people who get triggered by applause, it also disenfranchises the visually challenged, who wouldn’t know when people are displaying approbation for a speech or performance. How you do you weigh those off against each other?

As I said, it’s a small issue, but also a telling sign of the times. Anybody applauding at Oxford will likely be demonized.

Oxford and Cambridge are the UK’s equivalent of Harvard, and all three places are slipping inexorably to an intolerant and authoritarian Leftism. That’s better than authoritarian Rightism, but do we need this brand of authoritarian Diktat at all?  Inclusivity—which I view as conferring respect and equal opportunity on everyone, including access for the disabled and free speech for everyone—does not mean that an entire student body must always cater to what “triggers” a tiny minority. As we all know, this leads to a deadening uniformity of discourse, a uniformity that undermines the very purpose of a university.