This is one of those issues where I can sort of see a point, but in general think it’s also overblown. In fact, it was the subject of an NBC Today show post and tv segment. It turns out that a nine year old Utah girl named Rhythm Pacheco was asked to answer a math question in which the weights of various students (females) were compared. In particular, as you see below, it was a simple subtraction question, one that Rhythm answered but then expressed anger, saying she “wont right this its rood” (committing four errors in five words). Here’s her answer.

In the NBC video on the site, the hosts get all upset and see the question as sexist (or otherwise offensive).

Now Rhythm wrote a nice note to her teacher, and the teacher responded nicely (and corrected Rhythm’s writing in brown ink!: 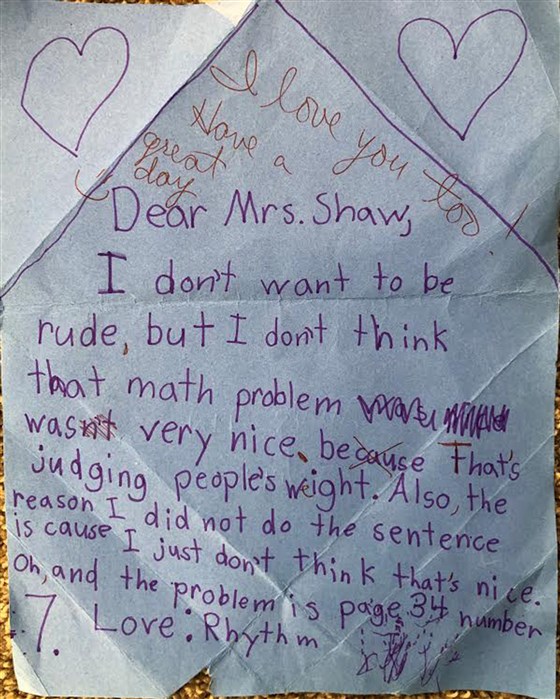 Here’s a television report from a local station, featuring Rhythm’s mother Naomi. You can see where Rhythm gets her ideology:

This is one of the issues where I’m torn. I do see that the comparison of bodies among women has been harmful, leading to things like anorexia and making a lot of women feel bad about themselves because they don’t or can’t look like skinny runway models. I also understand that a lot of this attitude comes from men’s ranking of women that includes weight. But would the question have been okay if they compared boys’ weights?

Nevertheless, this looks like overkill to me, with the mom being overly sensitive and inculcating her daughter with that attitude. Yet at the same time I’m proud of the girl for standing up for herself and having the moxie to write the teacher.

What do you think? Women’s voices would be especially appreciated in the comments.