UPDATE:  There have now appeared three letters from Bard academics, with links on the page of Ungar-Sargon’s essay. They all contend that she misrepresented the situation in serious ways. I haven’t yet absorbed all the letters, but stay tuned and I will clarify matters (assuming they need clarification) tomorrow.

UPDATE 2: There are now four letters and a new article in Jewish Currents taking issue with many of Ungar-Sargon’s claims. She hasn’t answered them. I’ve written a new post on the issue here.

Like Batya Ungar-Sargon, author of the piece below at The Forward (she’s the opinion editor at that paper), I don’t think criticism of Israel makes one an anti-Semite. Adhering to the BDS program puts you pretty close to being one, but, as Ungar-Sargon reports, when Palestinian sympathizers disrupt a panel on anti-Semitism—not on Israel—discussed by three Jews, and academics in the audience applaud the disruption, well, that’s anti-Semitism in my book—and Ungar-Sargon’s, too. 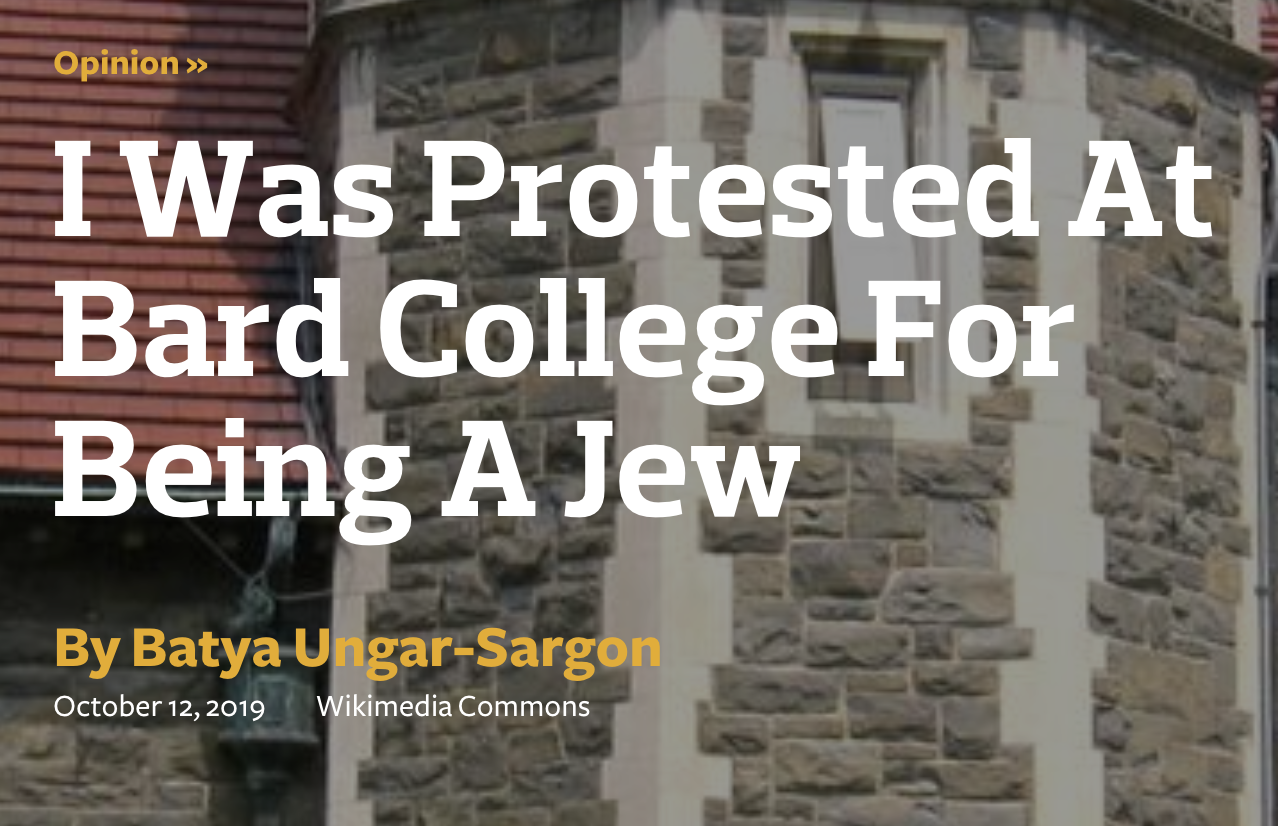 The backstory is that Ungar-Sargon was invited to sit on three panels on racism and anti-Semitism at Bard College‘s Hannah Arendt Center for Politics and Humanities.  Students for Justice in Palestine (SJP), which I consider an anti-Semitic organization, decided to disrupt one of her sessions. Ungar-Sargon wasn’t opposed to non-disruptive pushback, but told the students that another of her panels would be more appropriate for a protest. That’s because the students planned to protest a panel on anti-Semitism discussed by three Jewish people, which didn’t have Israel as its subject. And disrupt the SJP did, with the tacit cooperation of Bard officials:

When the conference began Thursday morning, I was warned that protesters from the Bard chapter of Students for Justice in Palestine planned to interrupt my panel with Wisse and Mor. I was surprised they were not targeting the one on Zionism, but the one on anti-Semitism, the only panel of about 20 over the course of the two-day program where three Jews would be discussing the topic.

“But we’re not even talking about Israel,” I said to the conference organizers. “How does that make sense?”

My concern was met with an explanation of the College’s policy towards protesters. The center’s leadership, and the two Bard College deans attending the conference, seemed to have no particular plan to handle what was fixing to become an ugly disruption of Jews trying to discuss anti-Semitism. Berkowitz told us that there would be added security, but the security officers were not allowed to remove the students.

As the protesters started to gather in the lobby, I approached them. I told them that I respected their passion and commitment to what they thought was right, but asked why they had picked this panel.

“Come to my panel tomorrow,” I said. “Come protest my comments on Zionism. I’ll be talking about the occupation. Bring your signs.”

I told them I’d reserve the first and second audience-questions for members of their group, but that protesting the all-Jewish anti-Semitism panel was undercutting their work.

And here is an appropriate place to insert a cartoon from reader From Pliny the in Between’s site Far Corner Cafe: 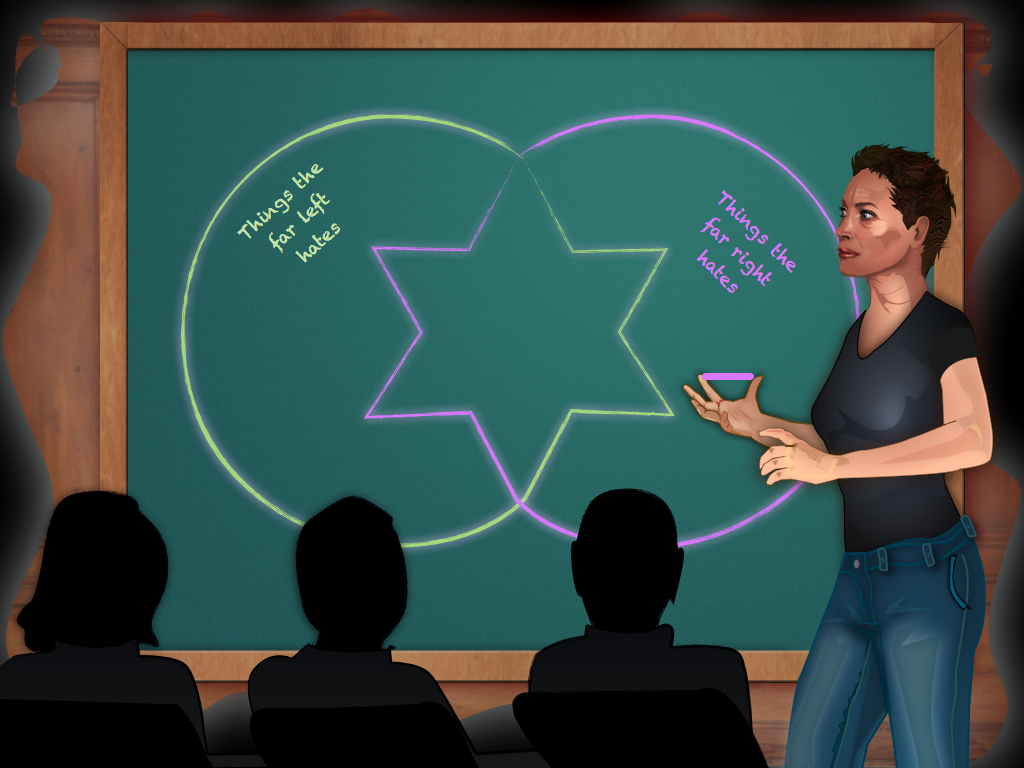 “Why are you silencing Palestinians?” he demanded. “There should have been a Palestinian discussing anti-Semitism. They have many thoughts about it!”

I left the party. How could I drink with people like that? And back at my hotel, I realized that it would be pointless to participate in Friday’s program. There is no debate possible when people think anti-Semitism is not only acceptable, but commendable.

So when I was introduced the next morning, I pulled out a new set of remarks.

There should have been a Palestinian discussing anti-Semitism? Seriously, that’s like insisting on having a white supremacist sitting on a panel of African-Americans discussing anti-black racism, or an anti-Palestinian Jew sitting on a panel discussing Islamophobia. Nobody would even think to countenance these things, or to countenance white disruption of a panel of black people discussing racism. But of course Jews are okay to disrupt. Remember, the panel wasn’t about Israel at all; it was about anti-Semitism, and Ungar-Sargon isn’t an Israeli. To conflate all Jews with Israel’s policies, and then go after Jews on those bogus grounds, is anti-Semitism pure and simple.

Ungar-Sargon made her 5-minute “new set of remarks”, which you can hear at the link below, at the beginning of the next day’s panel, and, after chastising the audience for its cowardice and complicity in the disruption, walked off the stage. Watch the video below before it disappears. It’s an eloquent and remarkable combination of anger, passion, and persistence.  (Click on the screenshot, and then on the video.) 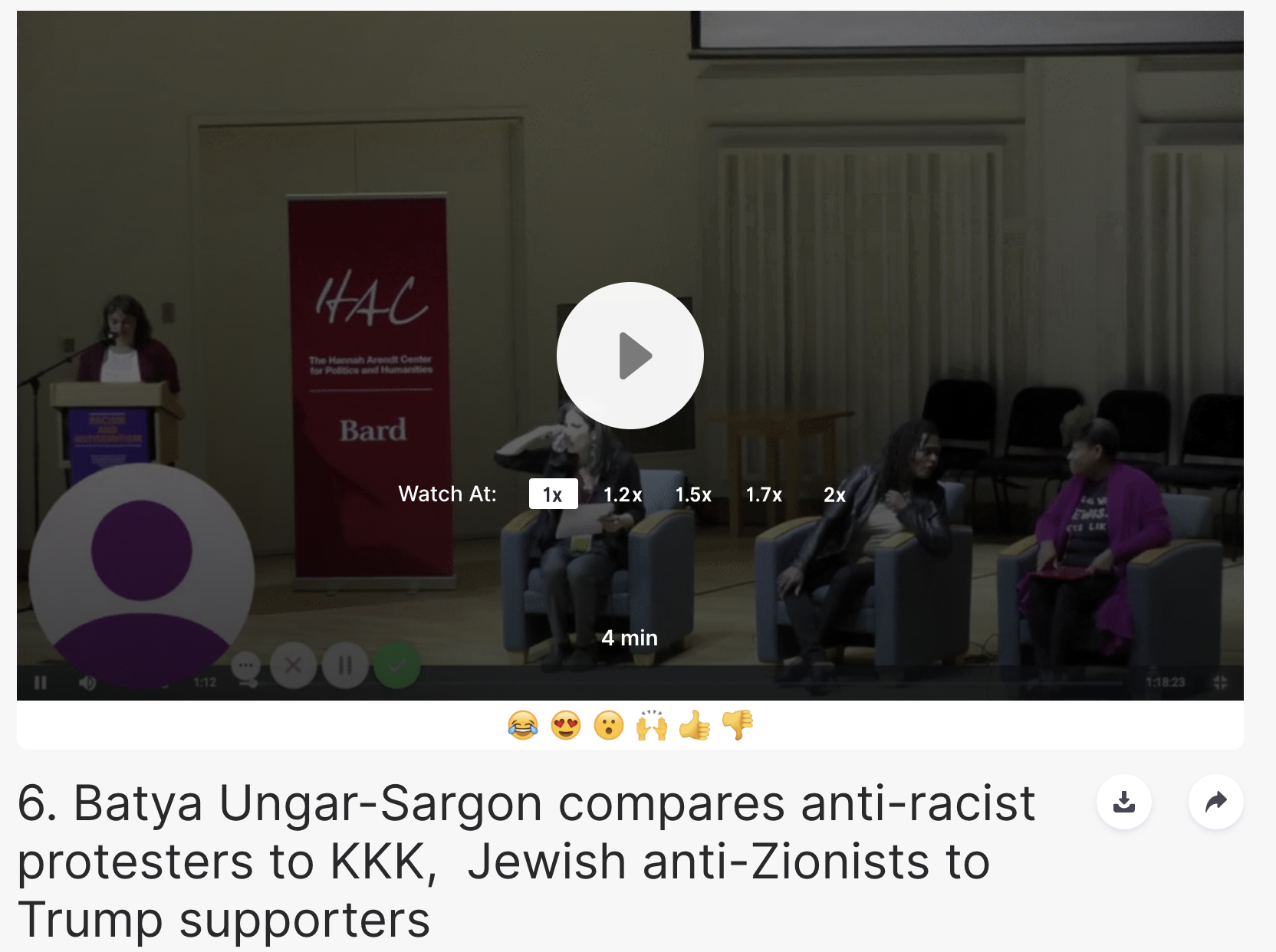 Ungar-Sargon finishes up with a few thoughts:

There is no debate possible when people think that your very humanity is up for debate, something my fellow conference goers no doubt accept as obviously true when it comes to anti-Black racism or anti-Muslim racism. And yet somehow, when it comes to anti-Jewish racism — holding one Jew accountable for the actions of another simply because they are Jewish — no one bats an eye.

. . . This is not a declaration against open, raucous, difficult debate. I am proud to publish what I believe to be the widest spectrum of voices, on the subject of Israel and many others, of any Opinion report in the nation. My hosting of these varied viewpoints was, ironically, one of the crimes listed on the handout the protesters distributed about me, none of which had anything to do with Israel but rather focused on my criticism of anti-Semitism on the left.

But showcasing dissenting viewpoints is the most important thing I do. As an Opinion Editor, I have three main mandates: to raise up the voices of those disenfranchised by current power structures; to represent the breadth of legitimate points of view from across ideologies and politics; and to challenge my own, my readers’ — and my writers’ — points of view in good faith.

But as I know all too well, the most important factor in hosting the full gamut of legitimate opinion is knowing where the red lines are. And if you think allowing Jews to be protested for being Jews does not represent a red line, I have nothing more to say to you, and nothing I want to hear.

I applaud Ungar-Sargon for taking this stand, and especially for calling out her fellow academics for what appears to be Left-wing Jew hatred, something that’s increasingly common. Bard College should apologize to her and issue a statement that disruption of talks like this will not be tolerated. I am not asking for Bard to stifle dissent or even declare that anti-Semitism is “against Bard College’s values”; I am asking Bard to help stop these endless disruptions of talks, whatever they’re about). And Ungar-Sargon’s fellow conference participants, who applaud anti-Semitism since it’s fashionable on the Left, should be ashamed of themselves.

34 thoughts on “Anti-Semitism at Bard College”