Today’s photos of animals, all from diverse groups, come from David Campbell, who relates a scary mallard story too—though it turns out all right. David’s captions and tales are indented:

Another batch of photographs.  The duck narrative has a happy ending although I didn’t expect one when it happened.

Mantispid (Dicromantispa interrupta). Convergent evolution at work.  This delicate little predator, a close relative of ant lions and lacewings, was found in Clay County, Florida.  I submitted this photo because I dimly remember PCC(E) saying he was thinking of a post on mantispids.  Maybe the photo will serve as a gentle nudge. [JAC: These are mantidflies in the order Neuroptera rather than Mantodea, like the mantises we know and love.] 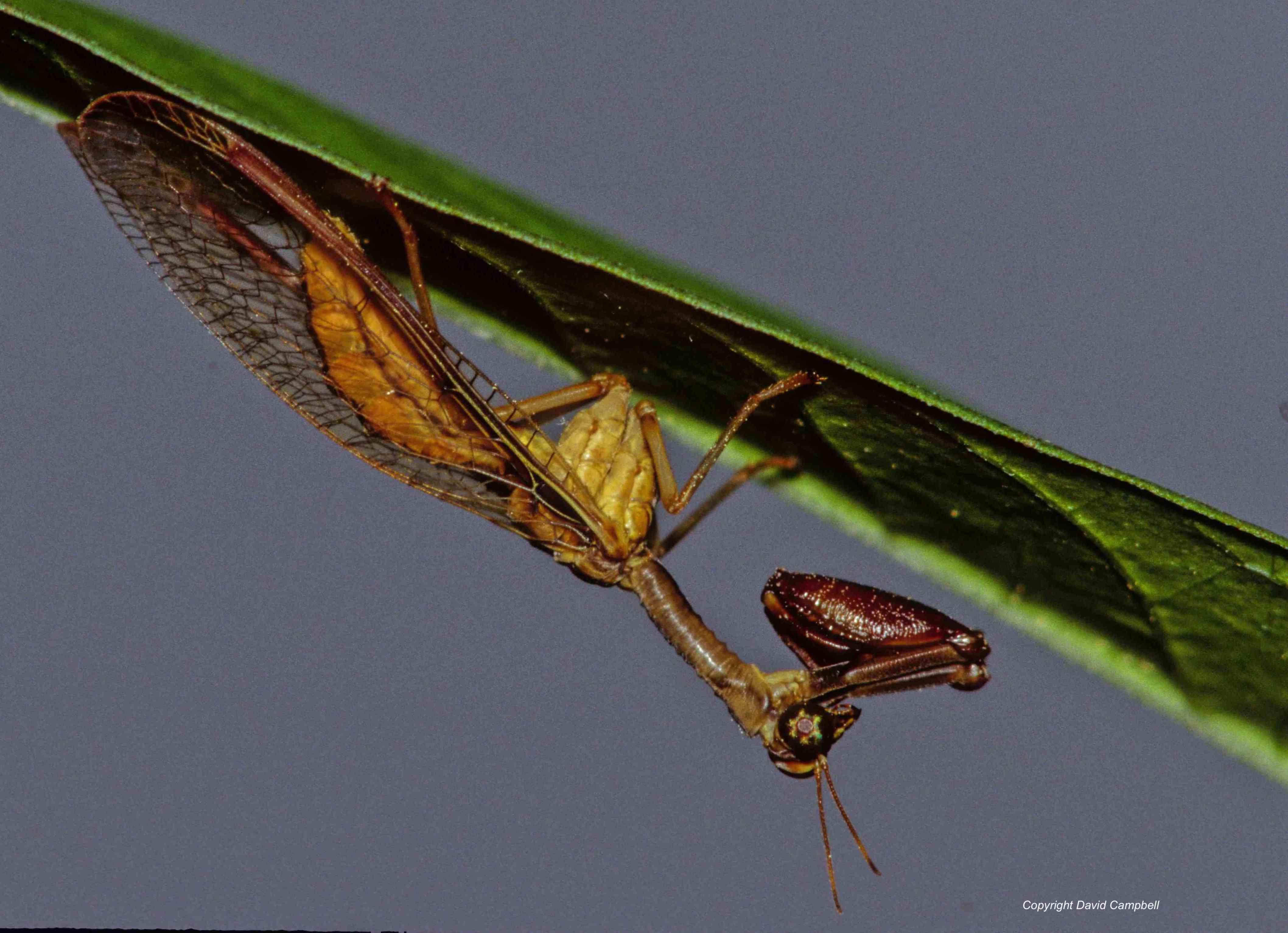 Great Golden Digger Wasp (Sphex ichneumoneus) photographed while digging a burrow near Gainesville, Florida.  When I got too close to where she was working she took off and hovered a couple of feet in front of me and, facing me, flew in a sidewise pendulum arc for 15 to 20 seconds until I backed away.  When she resumed digging I returned to my original position and she ignored me from then on.  In general, I find that solitary burrowing wasps are nonaggressive toward humans who don’t do something to antagonize them like stepping on, grabbing, or swatting them. 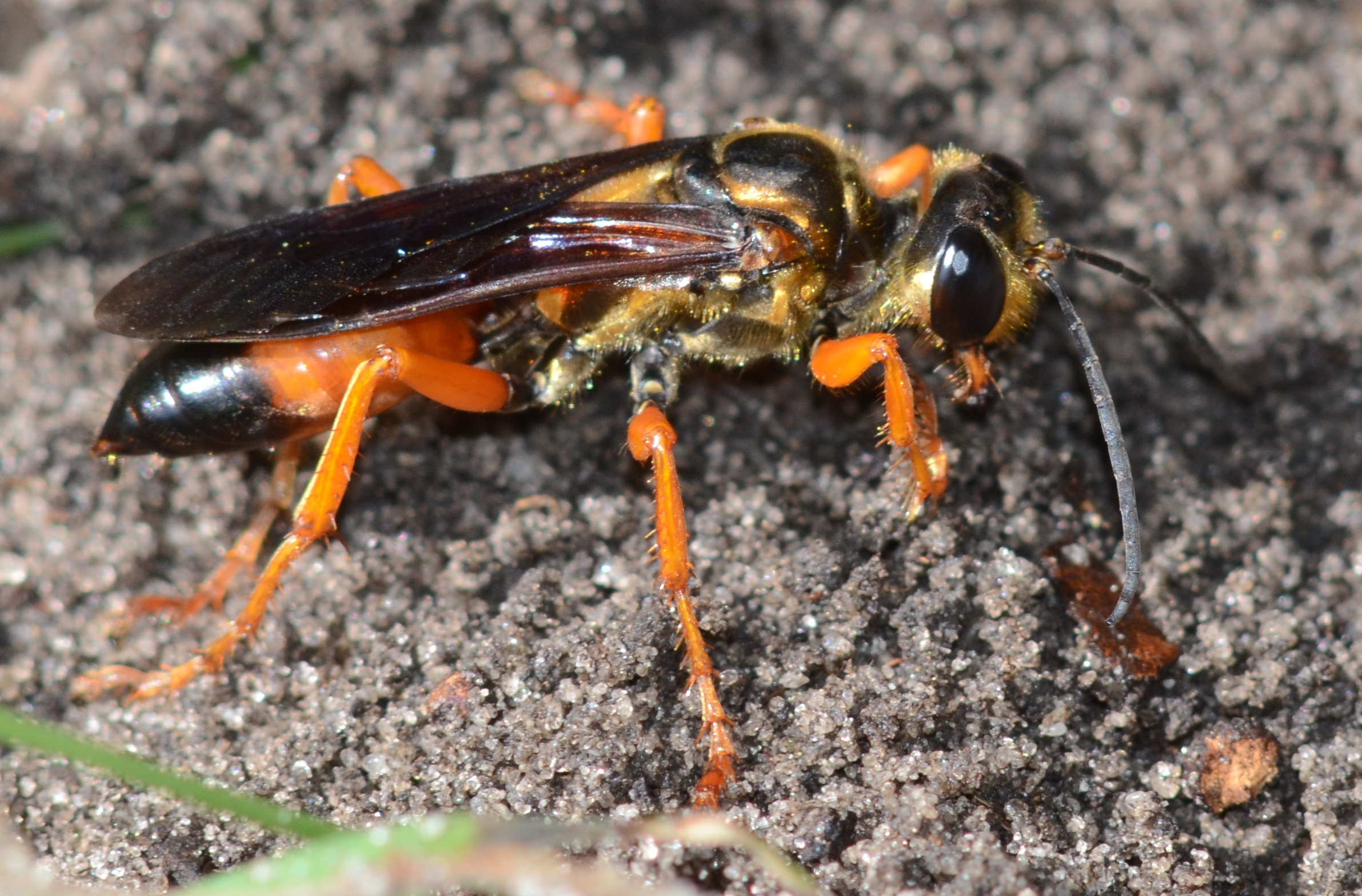 Striped Bass (Morone saxatilis) photographed at Silver Glen Springs in the Ocala National Forest, Florida.  Stripers are anadromous, spending most of their lives in saltwater but breeding in freshwater.  In late summer they congregate in large schools at Silver Glen, more than 70 miles up the St Johns River from the Atlantic Ocean.  I have also found blue crabs, flounder, striped mullet, and southern stingrays there. 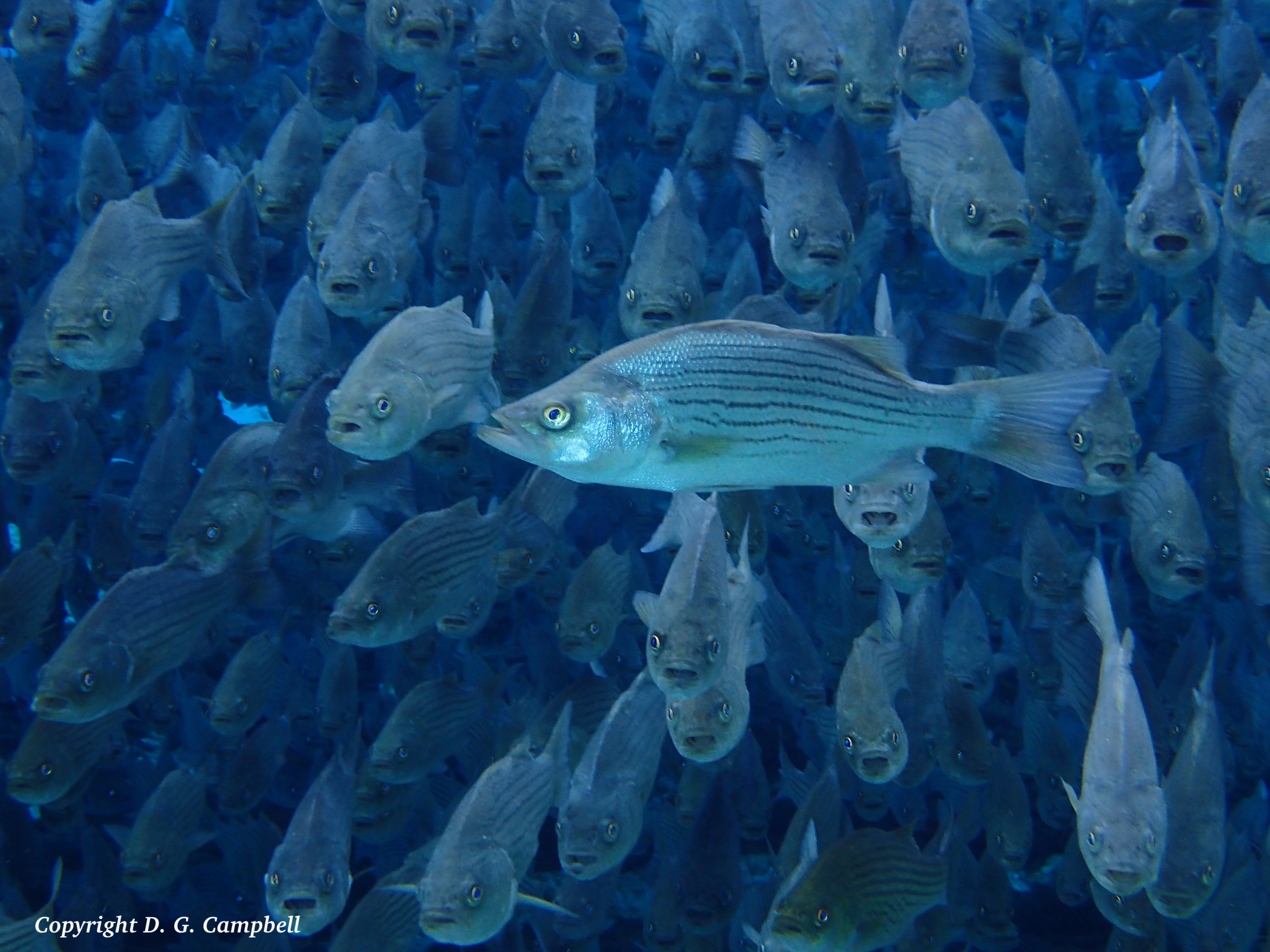 Citrine Forktail (Ischnura hastata) male.  North America’s smallest damselfly, it was photographed on a chicken-wire fence.  This is a New World species but there is a disjunct population in the Azores that apparently arrived in the late 19th century.  The Azores population reproduces by parthenogenesis, a process previously unknown in odonates. For the curious, there is a paper from Nature describing the investigation. 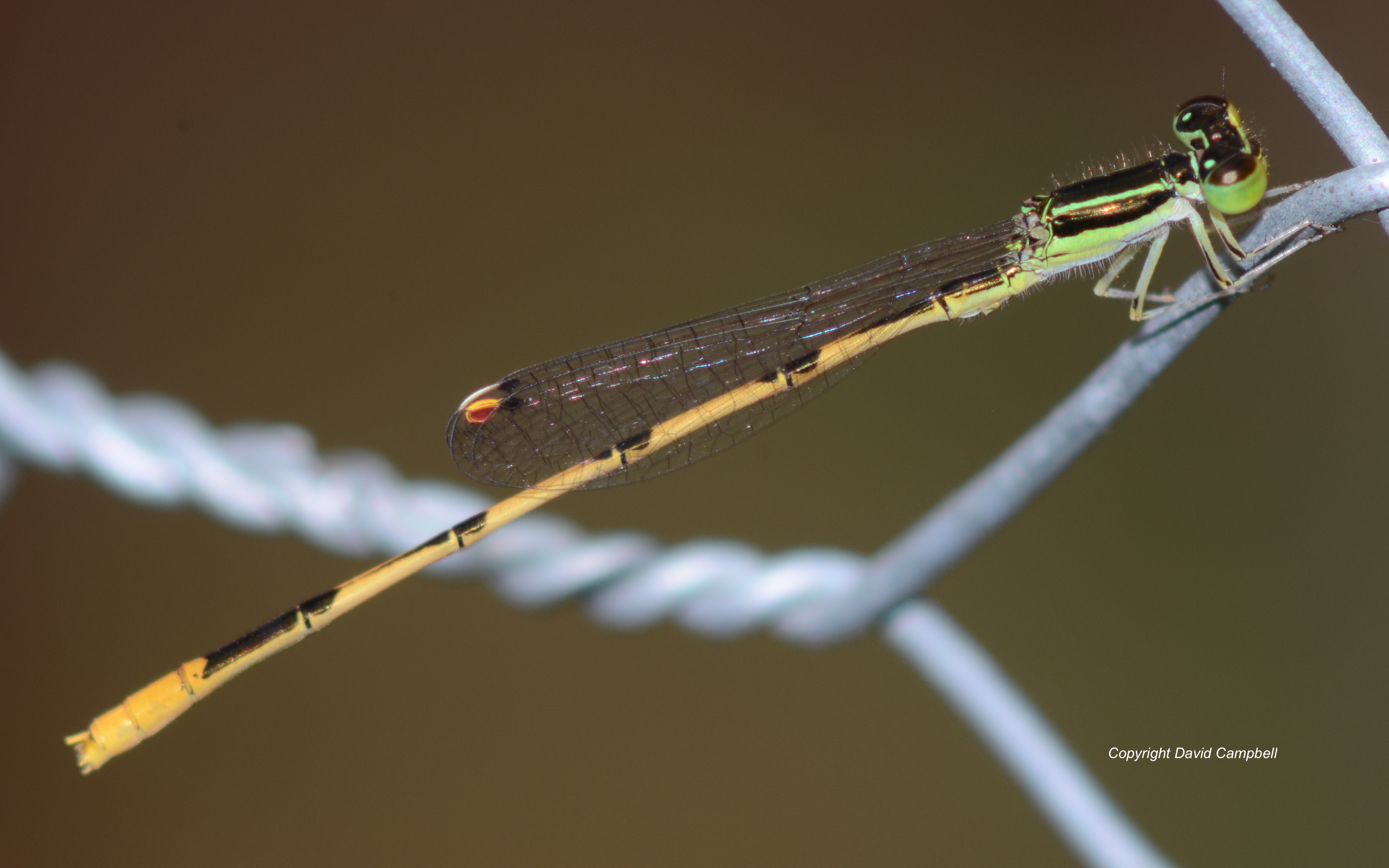 Mallard (Anas platyrhynchos) photographed at Glen Park in Williamsville, NY.  The stream is channeled with stonework retaining walls along much of its length.  A few seconds after this picture was taken the hen and duckling moved up against the retaining wall.  I watched as the duckling suddenly vanished, pulled down from below.  The hen squawked and fluttered and maneuvered her remaining 7 offspring to the opposite bank.

I was pretty sure what had happened because I spent a lot of time in college working near a large beaver pond and had seen snapping turtles grab young ducks.  I reacted from my gut and not my head (I probably didn’t need those fingers, anyway.) and reached down to try to find the duckling.  There just didn’t seem to be enough room at that spot for a large snapping turtle.  30 seconds of feeling around located nothing but weeds and water.  I stood up and looked at the remaining mallard family and, when I looked down again, there was a duckling motionless a few centimeters below the surface tangled in weeds.  I reached back down, found nothing restraining it but the weeds, and brought it back to the surface.  It sputtered a good deal but was soon breathing on its own.  Unfortunately, its feathers were so waterlogged that it couldn’t swim.

The hen fled every time I tried to approach so I left junior in very shallow water surrounded by aquatic plants for cover and support and went on my way hoping that a reunion would soon happen.  Thirty minutes later I passed by the spot and the duckling hadn’t left cover and mom and brood were 35 meters downstream oblivious to the racket produced by her abandoned offspring.  I collected the mostly dry duckling and released it on a flat  section of bank just downstream of the rest of the group.  Within a few minutes all was well again.  I suspect that a turtle did grab the duckling and something either distracted it (me?) or this duckling was too much for a small turtle to subdue and so was released.

JAC: What a nice thing to do! 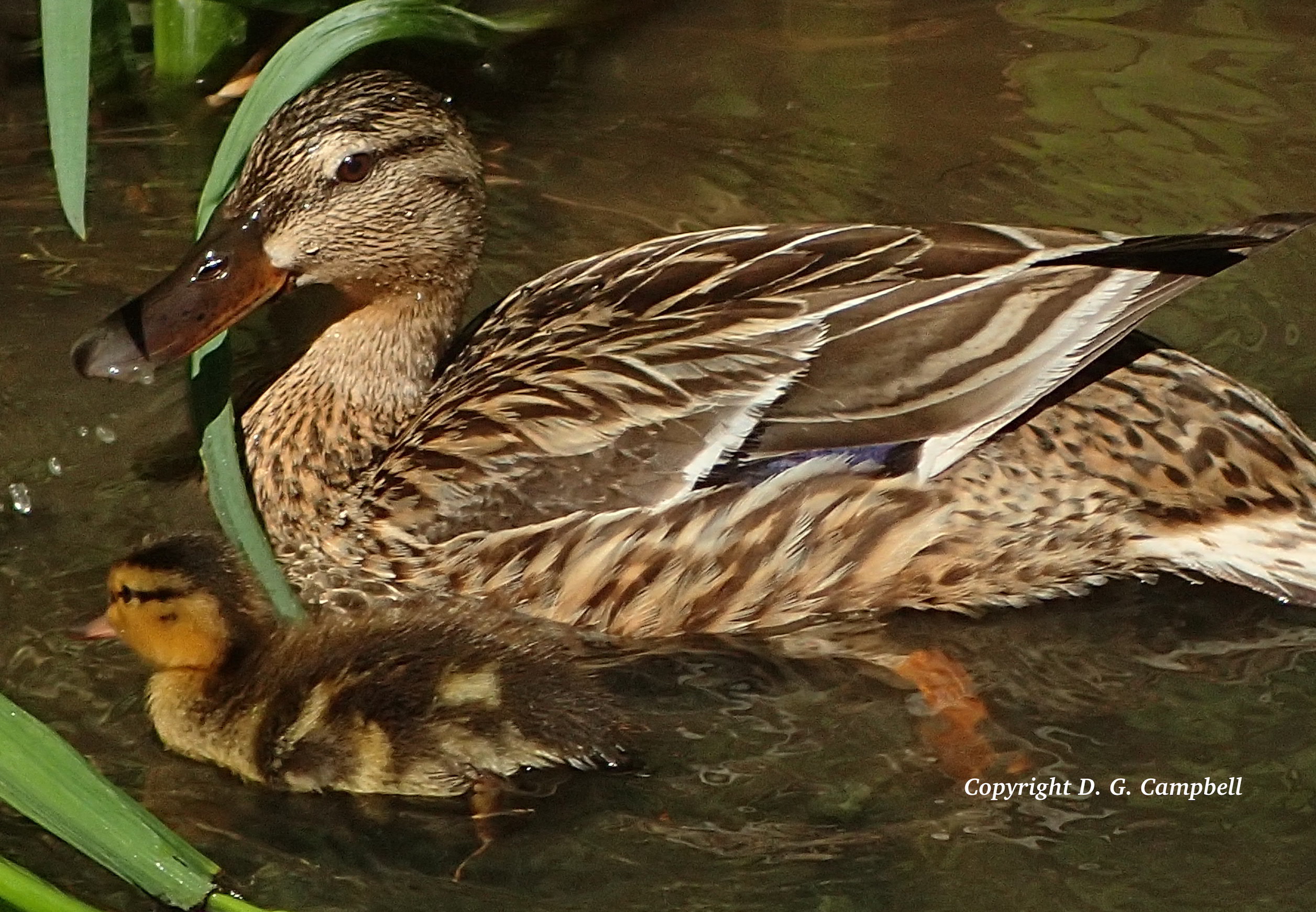 Mojave Rattlesnake (Crotalus scutulatus) photographed near Ajo, Arizona. This is one very angry and very dangerous snake.  Most North American pit vipers have a venom that is primarily hemotoxic but many Mojaves have a strong neurotoxic component that gives their venom an LD50 ten times more potent than most other rattlesnakes.  A similar variation has evolved in the canebrake rattlesnakes near my Florida home. 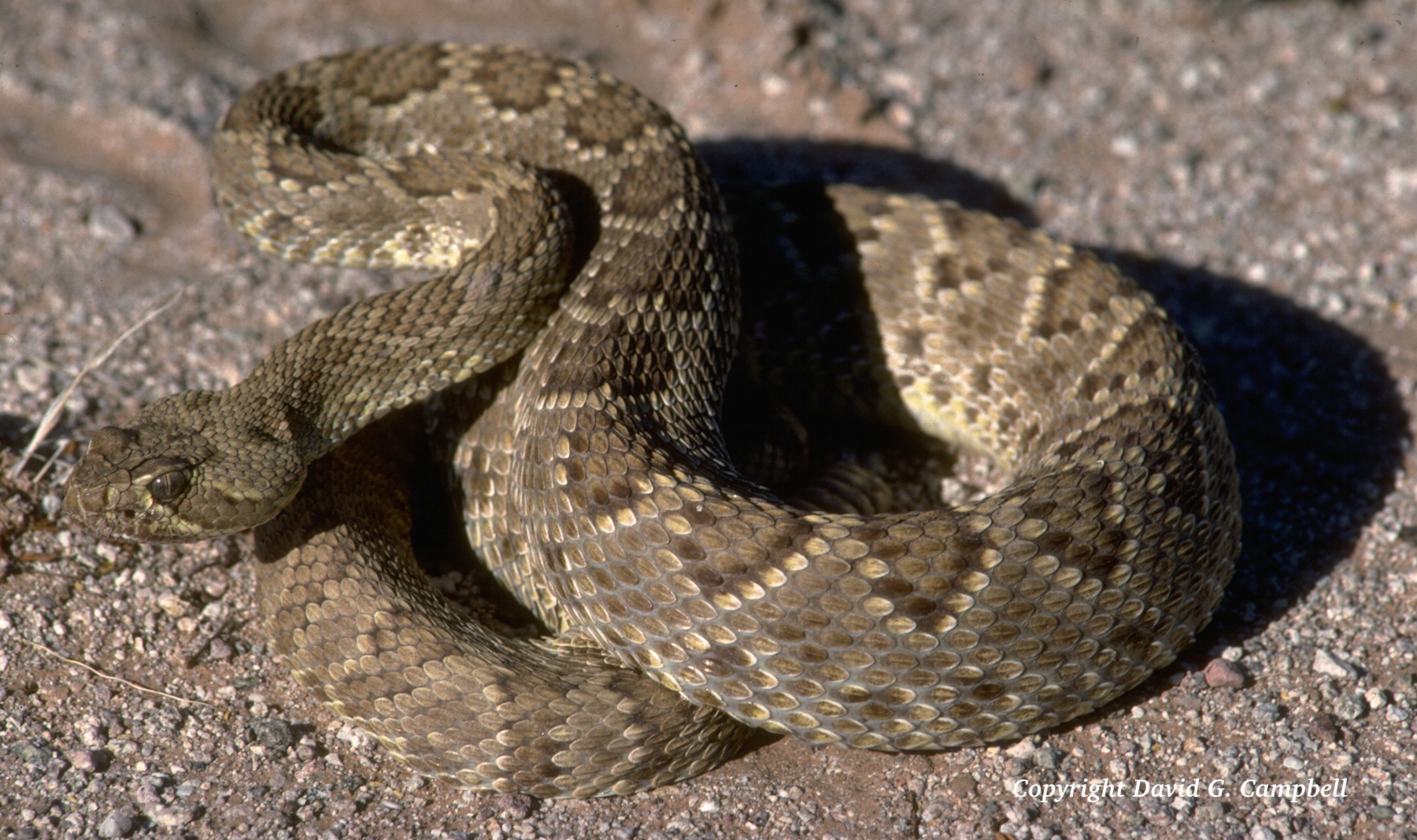