The Jerusalem Post and other outlets, as well as Amer Zahr himself, have reported that Zahr, described by Wikipedia as “a Palestinian-American comedian, writer, filmmaker, political activist, and adjunct professor at the University of Detroit Mercy School of Law”, has been appointed as a “campaign surrogate” for Bernie Sanders. A surrogate is someone officially allowed to campaign on the candidate’s behalf. Sadly, Zahr is a BDS supporter, and, as seen from other actions, apparently an anti-Semite.  Zahr thus joins Linda Sarsour as yet another anti-Semitic surrogate for a secular Jewish candidate.

Wanna hear a radical idea?!
I have been officially named as a surrogate for @BernieSanders 2020! I can’t wait to get on the road to spread the message of racial, economic, and social justice!#NotMeUs #Bernie2020 #AmuBernie pic.twitter.com/q1ukrK0Ts5

Zahr is a staunch advocate of the Boycott, Divestment and Sanctions (BDS) movement, and has campaigned against Israeli businesses in the US.

On Twitter, the comedian has made no secret his views on Israel, tweeting statements such as “American Jews are starting to realize that Israel is their ISIS,” “Israel has a prime minister with an American accent and a spokesman with an Australian one. Foreign colonist settlers,” and also added that “Describing defenders of Israel as ‘scumbags,’ ‘pigs,’ and ‘bastards’ is not necessary. ‘Zionist’ is sufficiently insulting.”

However, while Israelis may hold him with disdain, Palestinians hold Zahr in high esteem.

“He represents our culture and holds on to our Palestinian heritage in exile,” says Silvia al-Bina, a Jerusalem resident, who attended one of his comedy shows in Ramallah in 2016.

This is not a good choice for Sanders, whose views on Israel are dicey at best. Not only is BDS an anti-Semitic organization, whose founders and supporters tacitly approve of the disappearance of Israel, but Zahr was the one who covered up the state of Israel (replacing it with a Post-It that said “Palestine”) on a map in Rashida Tlaib’s office on the day Congresswoman started her job, and laughed about it (see tweet and video below). BDS, of course, wants Israel gone and replaced with a Palestine “from the river to the sea”.

In Rashida Tlaib’s office today, we realized that there was something wrong with the map. So, I fixed it. @rashidatlaib #Palestine #FreePalestine #WeAreOnTheMap #Congress #Rashida #RashidaTlaib pic.twitter.com/q3hczwSGOH 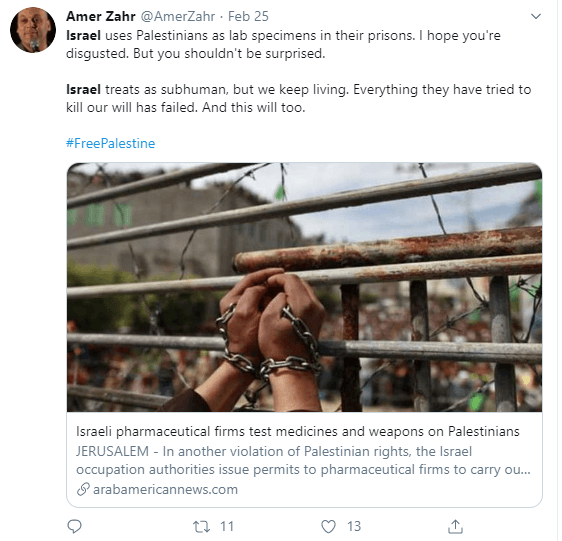 A call for the disappearance of Israel:

Seriously, Bernie, is this a guy you want representing you on the campaign trail? Or, as Zahr’s female equivalent, this one?

"I would be so proud to win, but also to make history and elect the first Jewish American president this country has ever seen and for his name to be Bernard Sanders." –@lsarsour pic.twitter.com/INPRlvmMur

If forced to choose between Sanders and Trump, I would of course vote for Sanders, as I did in the Democratic primary in the last election. Next year, however, I don’t think Bernie will be a serious candidate for President (his recent heart attack, for one thing, will give Americans pause), and I’ll be glad to vote for Elizabeth Warren in the primary and final election, though of course we’re not sure she’ll be the Democratic candidate. (I’m pretty sure that by November of next year she’ll have “modified” her view on eliminating all private healthcare in favor of mandatory government healthcare for all.)