Last Thursday, Ben Watson, a journalist for the national-security news site Defense One, was detained at Washington D.C.’s Dulles Airport by U.S. Customs and Border Patrol (CBP).  He was detained simply because he was a journalist and therefore supposedly wrote “propaganda”. You can read the story by clicking on the links at the Washington Post and Defense One below (the latter story is by Watson himself). 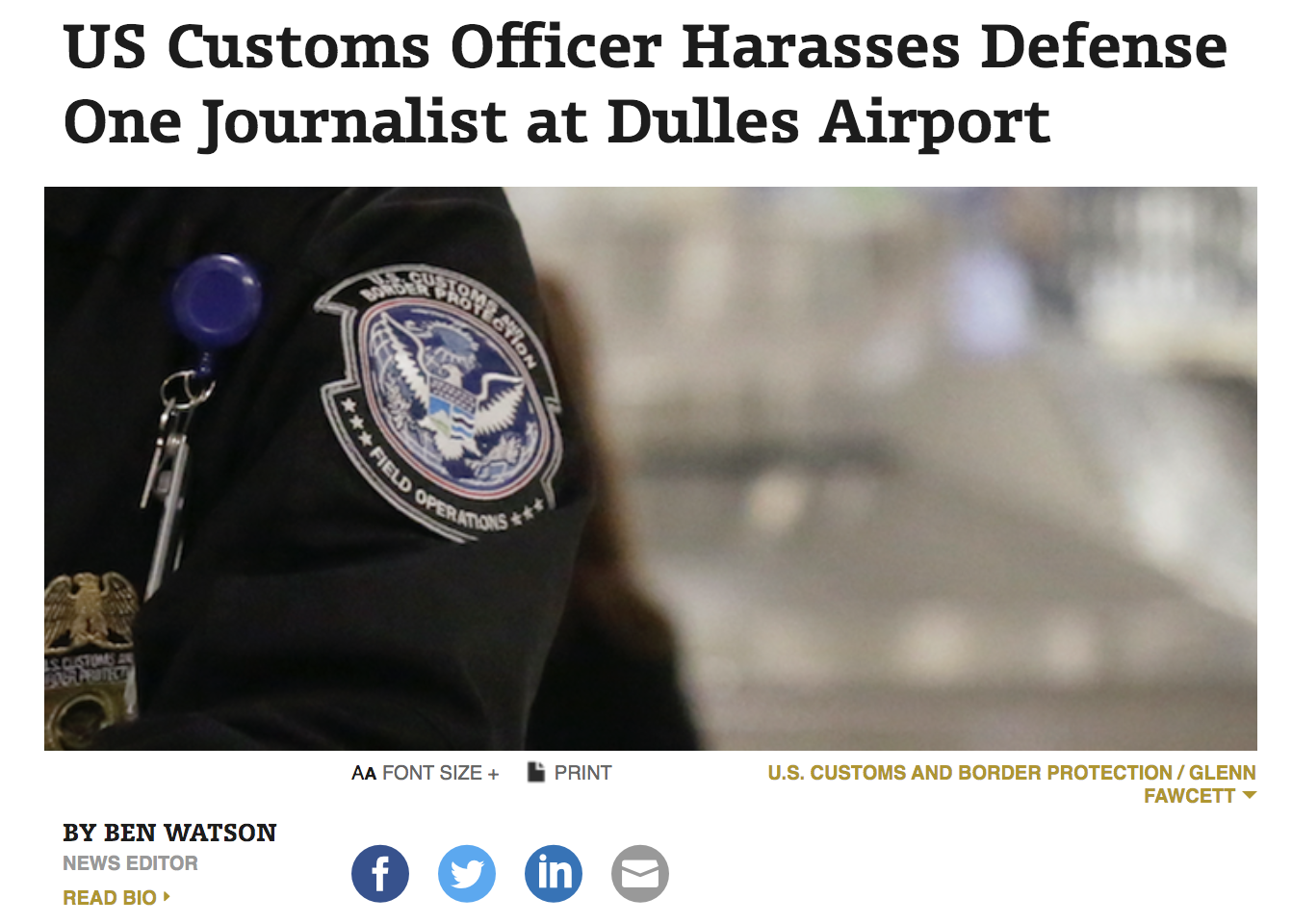 Learning that Watson was a journalist, the passport screener engaged in the conversation with Watson below (from Watson’s report):

CBP officer, holding Watson’s passport: “What do you do?”

Watson: “No. I am in journalism. Covering national security. And homeland security. And with many of the same skills I used in the U.S. Army as a public affairs officer. Some would argue that’s propaganda.”

Watson waited five seconds. Then: “For the purposes of expediting this conversation, yes.”

Watson, again: “For the purposes of expediting this conversation, yes.”

At that point, the CBP officer handed back the passport.

CBP is investigating the incident and Watson has filed a civil rights complaint with the Department of Homeland Security.

Now one could say, as I thought when I first read this, that this is just an oddball CBP employee who has absorbed a dose of Trumpism, but the detention of journalists appears to be more pervasive than I thought. As the Washington Post reports:

A growing list of journalists say they have been startled by government officials’ harassment in a country that prizes freedom of the press. The encounters are raising fears that hostile rhetoric led by President Trump and his allies are damaging reporters’ ability to do their job unhindered.

This spring, the World Press Freedom Index called journalists’ treatment in the United States “problematic” for the first time in its 17 years of assessments — and singled out “President Trump’s anti-press rhetoric and continuing threats to journalists” as driving the deteriorating conditions. The U.S. ranking on the index has fallen for the past three years.

Journalists have had reporting run-ins with border agents for years, too.

In 2016, a Canadian photographer on his way to cover protests in the United States was detained for more than six hours. Ed Ou said airport officers took away his cellphones after he refused to unlock them, saying he needed to protect his sources. When Ou got the devices back, he suspected tampering and potential data copying.

If Ou had already been inside the U.S. border, law enforcement officers would have needed a warrant to search his smartphones to comply with a 2014 Supreme Court ruling. But the journalist learned the hard way that the same rules don’t apply at the border, where the government claims the right to search electronic devices without a warrant or any suspicion of wrongdoing.

Several other journalists have described difficulties getting through airports in 2019.

In February, CBP apologized to a BuzzFeed journalist questioned at a New York airport about his news organization’s coverage of Trump and special counsel Robert S. Mueller III’s investigation. A few months later, a freelancer said he was detained by CBP officials for hours at an airport in Texas.

Then, in August, British journalist James Dyer described an “unsettling experience” as he flew into California to cover a Disney event. The film and TV writer said a CBP officer at Los Angeles International Airport called him a member of the “fake news media” and asked if he had worked for CNN or MSNBC, two frequent targets of Trump’s criticism.

“He aggressively told me that journalists are liars and are attacking their democracy,” Dyer wrote in a viral tweet thread.

He said he was allowed to move on after explaining that he was just trying to write about Star Wars.

This has happened to me coming back into the country too, last year – a pretty aggressive questioning about who I worked for and “fake news.”

Also when you’re not a US citizen (I’m a permanent resident) this takes on a much more threatening tone if they could deny you entry. https://t.co/14C5XUwUht

Things have come to a pretty pass in America when border patrol agents harass journalists. This did not, as far as I know, happen on such a scale before Trump was elected, and is clearly a byproduct of the Chief Moron’s constant war with the media and cries about “fake news.” Just one more reason to impeach him and remove him from office. As for the officer above, he should be disciplined and told that he’d be fired if he ever did anything like that again.