Amidst the many New York Times editorials calling for impeaching or investigating the “President”, including an editorial-board opinion favoring an impeachment inquiry, we have an outlier: the following article by Christopher Buskirk, a contributing opinion writer identified as “editor and publisher of the journal American Greatness, [and] a co-author of “American Greatness: How Conservatism, Inc. Missed the 2016 Election and What the D.C. Establishment Needs to Learn.”

The thrust of the article is what we hear coming from many centrists and conservatives (including “never-Trump” Republicans), and even a few Leftists. Even those who want Trump gone say that impeachment proceedings by the House of Representatives—proceedings likely to result in a successful impeachment given that only a simple majority is needed—won’t succeed at the next step, a trial in the Senate. For conviction in a Senate trial requires a 2/3 majority of Senators before the President is convicted, and that seems unlikely to occur. (Conviction would result in removal of the Trump from office, making Pence the interim President.) The argument for impeachment is powerful: there is ample evidence that the President has committed “high crimes and misdemeanors”, and beyond that he appears deranged and incompetent, unable to lead the country. Surely at least an investigation is warranted, one that could subpoena documents now off limits.

But if you want Trump gone, the arguments against impeachment proceedings are threefold, all of them tactical:

1.) Impeachment is very unlikely to succeed in the Senate trial, no matter what evidence is brought out in the House investigation and questioning.

2.) Impeachment will arouse sympathy for Trump, turning him into a Republican martyr and making him more likely to be elected next year.

3.) Impeachment will tie up the Democrats in endless and fractious anti-Trump activity when we should be developing a solid platform with which to defeat Trump. This, too, could help Trump’s chances of re-election in 2020, especially if the Democrats come off as angry and hysterical rather than judicious during the impeachment proceedings.

Buskirk raises all three of these arguments in his piece (click on screenshot):

This excerpt gives the gist of Buskirk’s argument, drawing on two other impeachment efforts in my lifetime:

The vote in the House to open impeachment proceedings against Richard Nixon was 410-4; against Bill Clinton it was 258-176. The actual impeachment votes against Mr. Clinton in 1998 were 228 to 206 on perjury and 221 to 212 on obstruction of justice. He was not convicted of either charge in the Senate trial.

Now, compare the political outcomes. The broad, bipartisan vote against Nixon led over time to a series of events in which conservatives, including the Republican candidate who preceded Nixon, Senator Barry Goldwater, abandoned the president, who ultimately resigned. The narrow, partisan votes against Mr. Clinton led to his acquittal. Al Gore narrowly lost the next presidential election while Democrats picked up a seat in the House. Hillary Clinton went on to become a senator, secretary of State and presidential nominee. In other words, when Republicans allowed their animus against Mr. Clinton to override their political instincts, they were hurt, but the Clintons were not.

Surely Ms. Pelosi must know that there are not 67 votes in the Senate to convict President Trump of anything relating to his phone call with President Zelensky. So it’s just political theater. The problem is that as it plays out over the next year, everyone will get the joke: The House is just going through the motions to stoke its own base before the election, just as Newt Gingrich’s majority did in 1998. That, in turn, will energize Republicans to support the president. But there is another danger for Democrats lurking here: that they will ultimately demoralize their most loyal voters when they realize the joke’s on them. There will be no resignation, there will be no conviction in the Senate.

But there will be an election. And by focusing on their obsession with the person of Donald Trump, Democrats are giving up the opportunity to talk about wages, employment, the shrinking middle class or any of the other things that motivate normal voters. After two and a half years of hearing about Russia, Russia, Russia, there are vanishingly few swing voters who want to spend the next 14 months hearing about Ukraine, Ukraine, Ukraine.

For the Democrats, the political problem is that this is just more Washington psychodrama. And as engaging as that it is for people in politics, for the journalists who cover it and for people who are deeply ideological, it is uncharismatic and irrelevant to many voters who, rightly, just want to know what Washington is going to do for them.

In reality, everyone knows that Ms. Pelosi’s pursuit of impeachment will not result in a conviction in the Senate and the removal of Mr. Trump from office. So it’s hard to see this as anything other than desperation — an acknowledgment that there is no Democratic candidate likely to beat Mr. Trump head-to-head on issues like China’s mercantilist trade policy, stagnating wages, the shrinking middle class and immigration. By choosing impeachment, Democrats are choosing the ground on which they want to fight the election. But the ground they have chosen is shaky. It imperils their current front-runner, and it avoids the very issues that motivate voters in must-win states.

Such an argument puts us in a conundrum: if we do what we think is right, and try to get rid of Trump via impeachment—a tactic that will almost surely fail—then we may actually help him gain another term, which would prove a disaster for America. Not only would we have a deranged and dangerous President, but he would be even more vindictive and angry at the Democrats having tried to depose him. The only “out” here is that the evidence against Trump might be so strong that it would change the minds of many Republicans, so that a 2/3 vote to convict would be likely. But that seems nearly impossible: 20 of the 53 Republican senators would have to change their minds, and all of the 45 Democrats and 2 Independents would have to vote to convict.

Now I’m not as convinced as is Buskirk that House impeachment proceedings would help Trump by turning him into a martyr. Nor do I think that, given Trump’s behavior, he stands a big chance of re-election even now. And I’m also a fan of doing what is right, which, in this case, is to at least try to remove a dangerous and incompetent leader. The only thing that worries me is that impeachment will distract the country and the Democrats, hurting a solid drive to get a Democratic President elected next year.

Reading Buskirk’s argument, although I don’t agree with him, did make me nervous. The way ahead, if we try to impeach, is not as clear as I’d like it to be. The evidence against Trump is nowhere near as strong as what they had on Nixon, and the Mueller report and even the phone call to the Ukraine have been sloughed off by Republicans. There is no way the Senate will vote to convict unless there are documents with even more damning evidence. Should we then hold off doing the right thing for a greater good: the removal of Trump via a vigorous Democratic campaign?

I still feel that impeachment is the right thing to do, but my feeling about this is not strong because of the possible backlash.

What say you? I won’t run a poll this time (the question would have been “Should we impeach Trump taking these counterarguments into consideration?”), but will ask for your opinion rather than a simple “yes” or “no”.

Update: Reader Pliny the in Between gives his vote on the site The Far Corner Cafe: 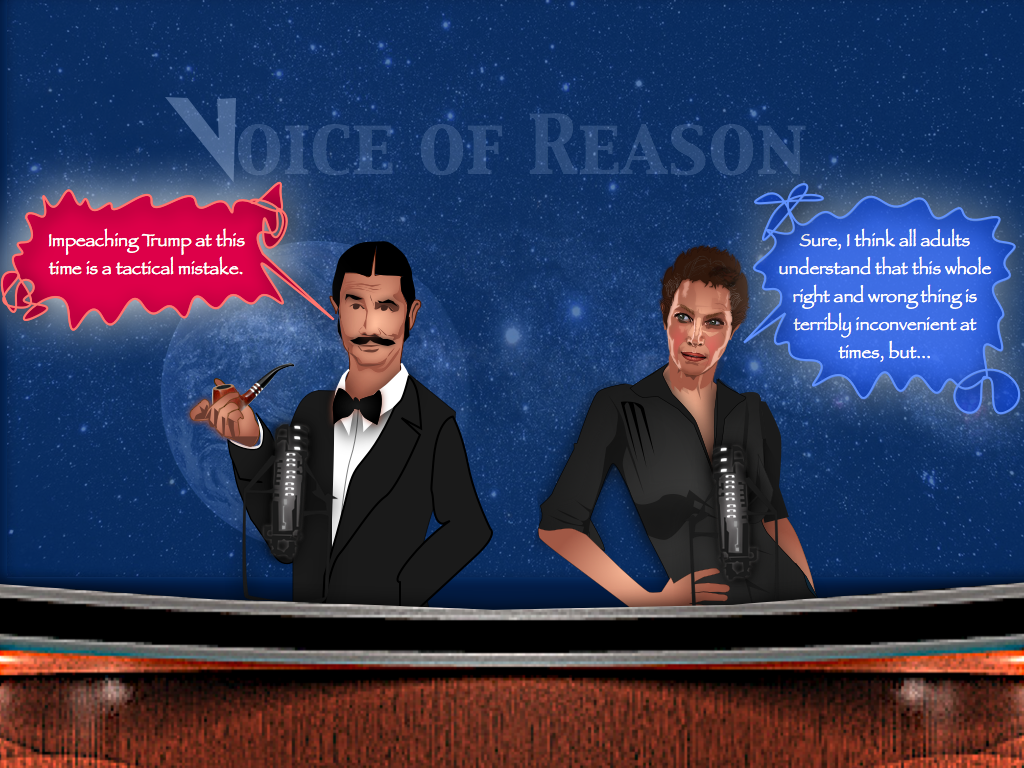 236 thoughts on “Once again: Is impeaching Trump a bad tactic?”